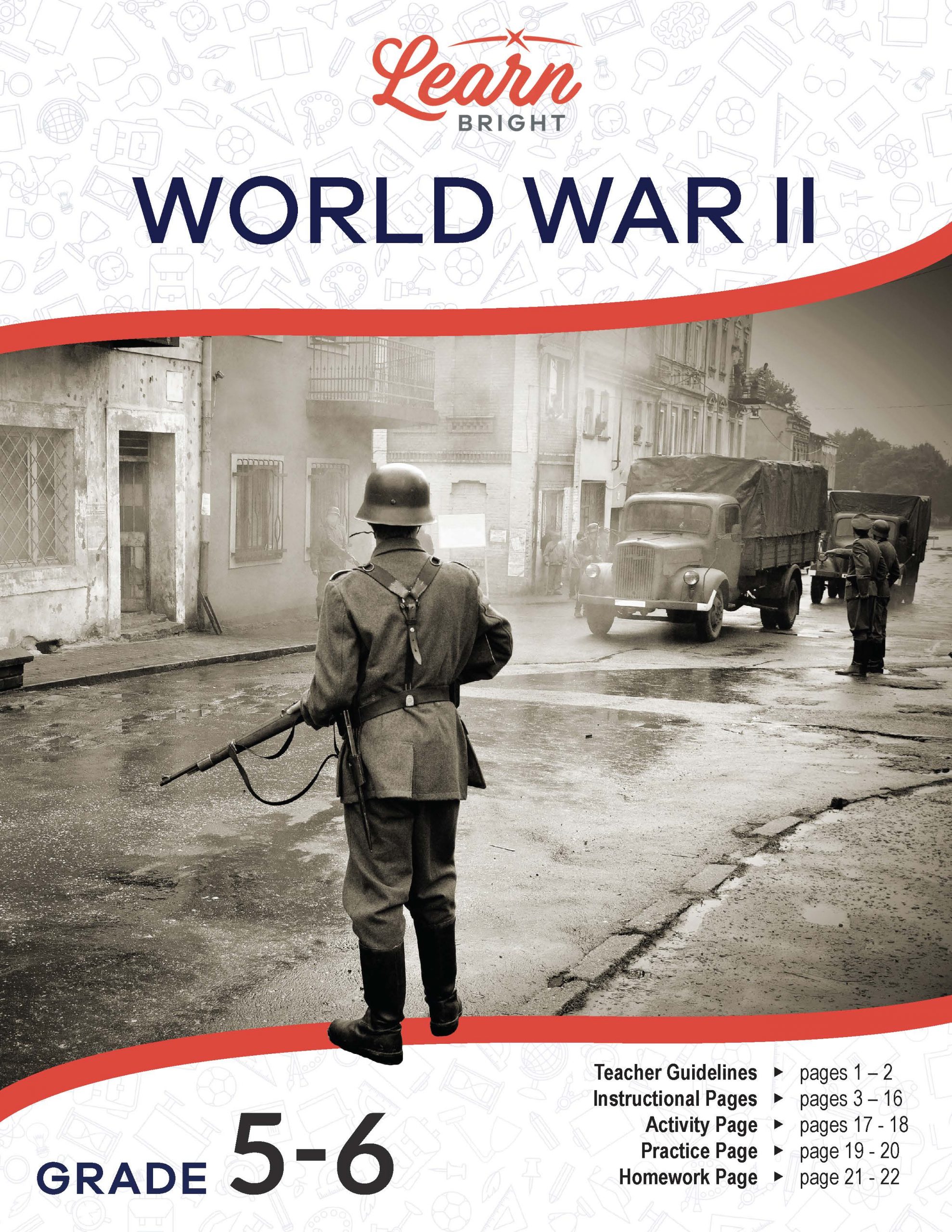 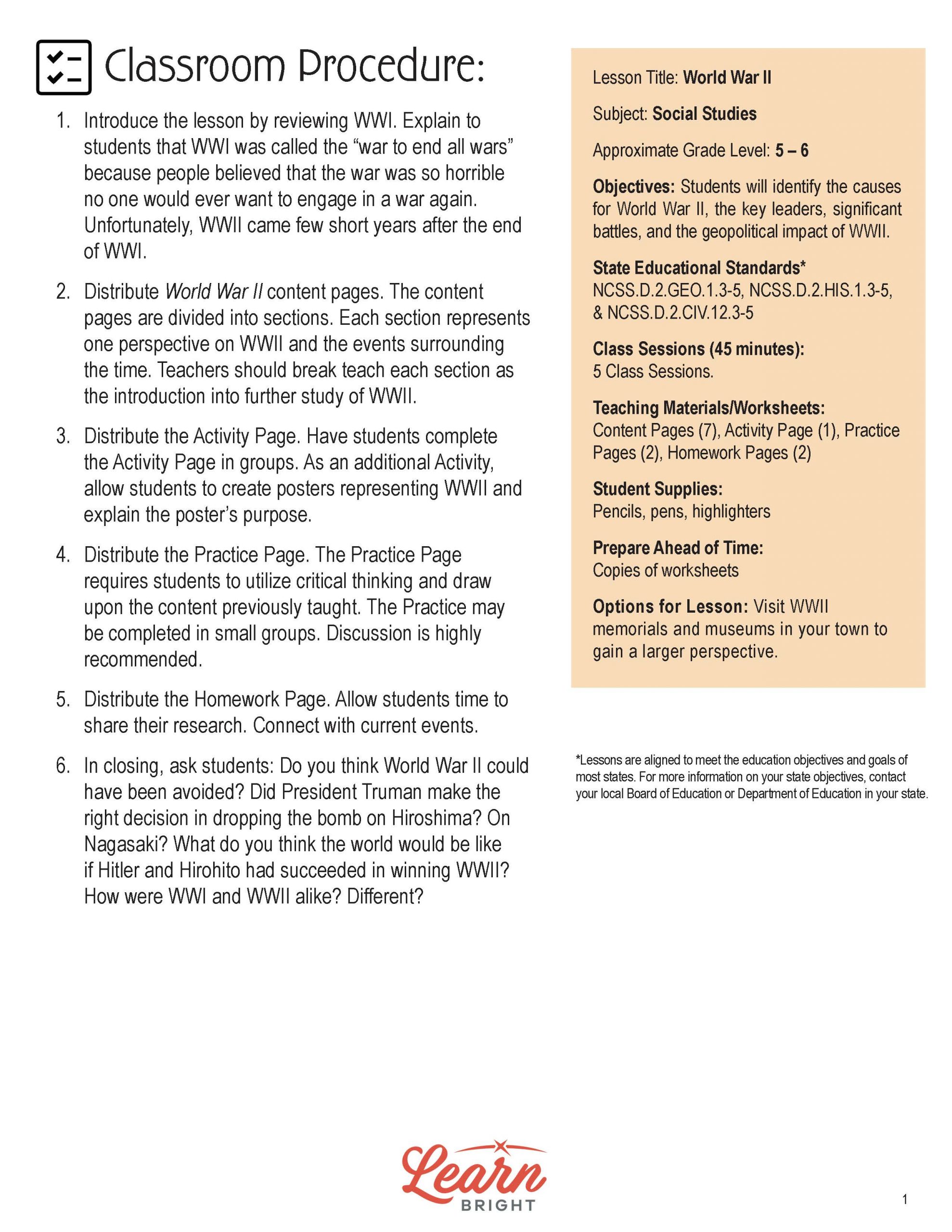 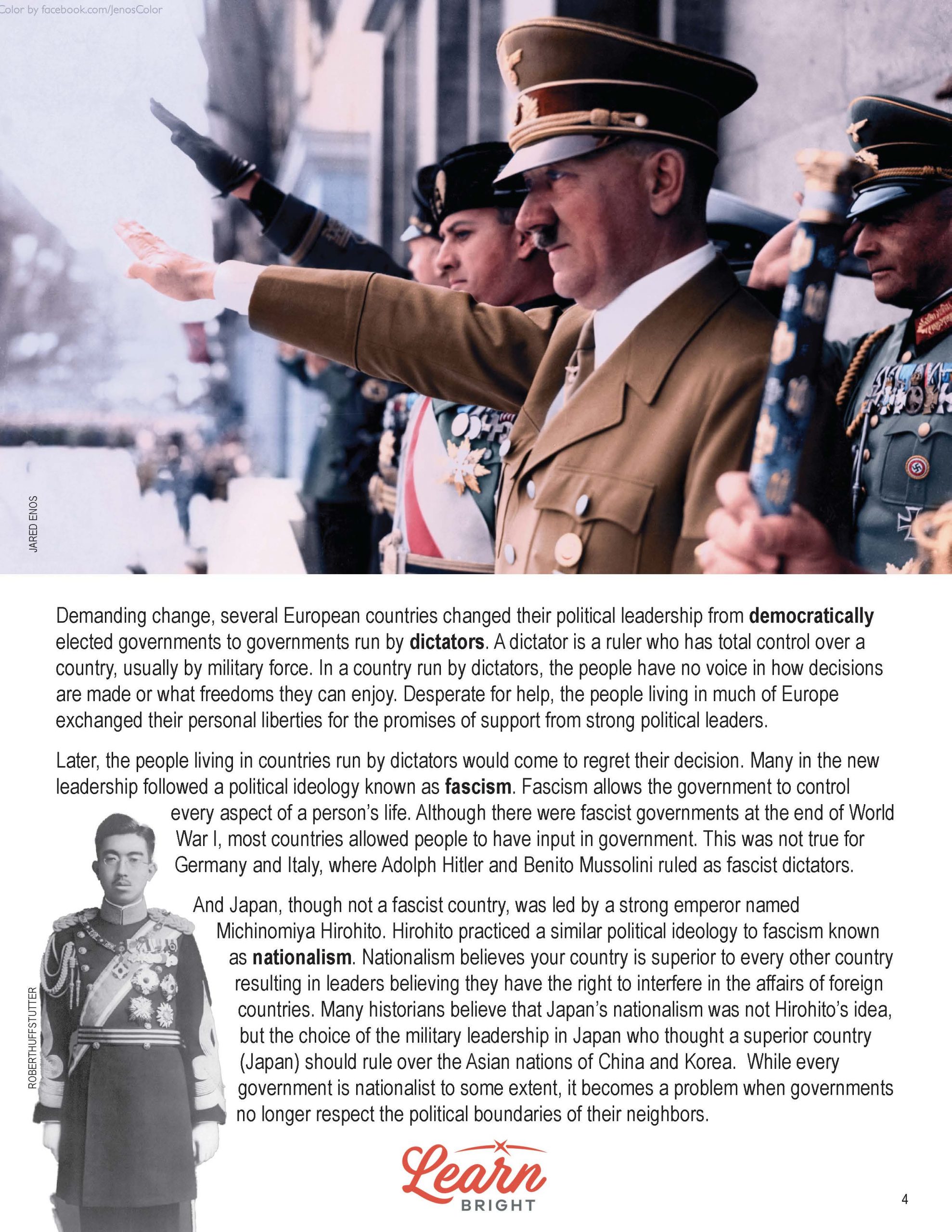 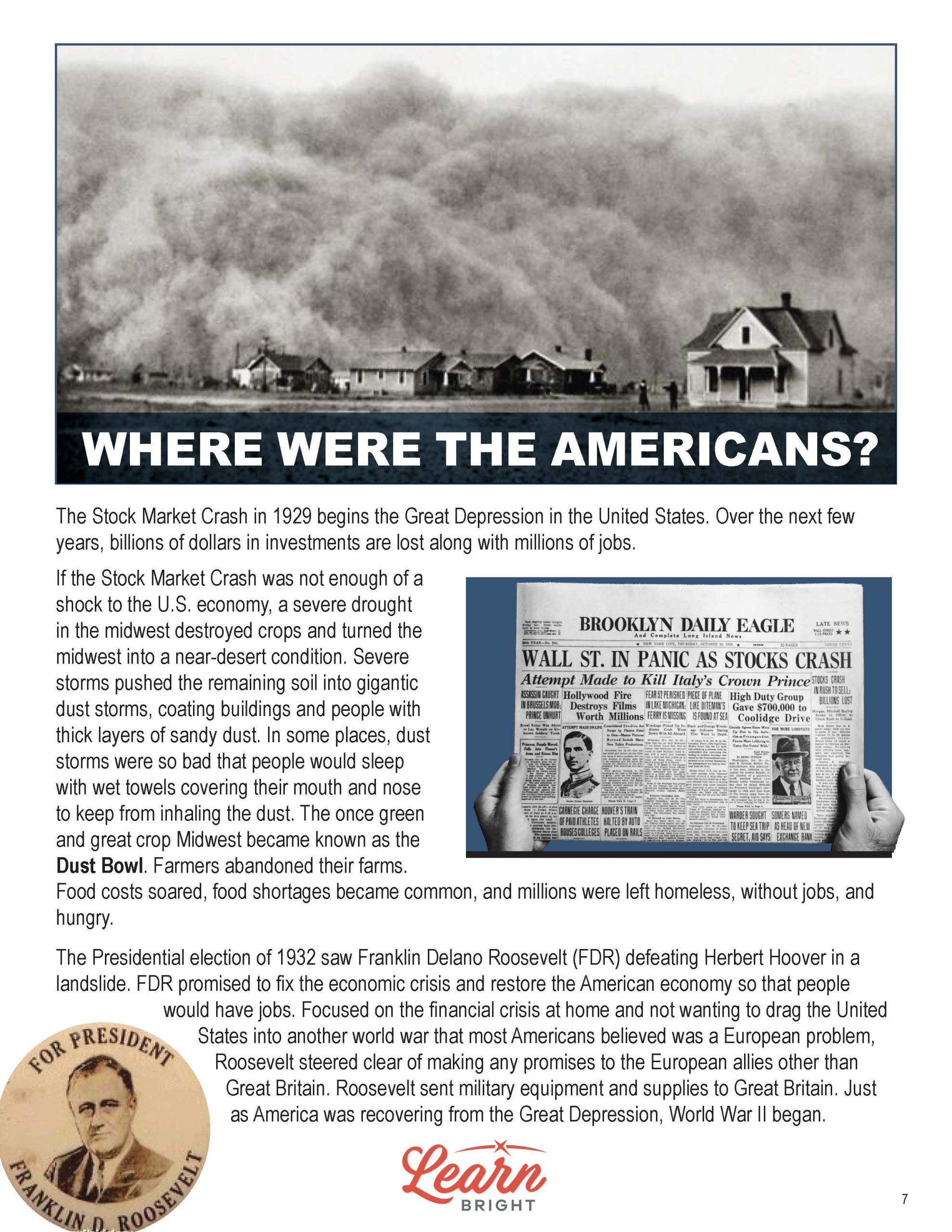 If you’re looking for additional things to add on to this lesson, you can find some in the “Options for Lesson” section. One of the options is to assign each of your students a person, place, or event related to World War II to research and present.

Lesson Objectives and Overview: World War II explores the causes, effects, and key figures of the second World War. Students will learn about this important and world-changing event in history. This lesson is for students in 5th grade and 6th grade.

Every lesson plan provides you with a classroom procedure page that outlines a step-by-step guide to follow. You do not have to follow the guide exactly. The guide helps you organize the lesson and details when to hand out worksheets. It also lists information in the orange box that you might find useful. You will find the lesson objectives, state standards, and number of class sessions the lesson should take to complete in this area. In addition, it describes the supplies you will need as well as what and how you need to prepare beforehand.

For this lesson, you will need scissors, the handouts, and access to the Internet or other sources for the students to use for additional research. To prepare for this lesson ahead of time, you can gather the supplies, make sure you’ve arranged for students to have access to the Internet, and find a map of the world for the opening of the lesson. You can also copy all of the handouts.

Included with this lesson is an “Options for Lesson” section that lists a number of suggestions for activities to add to the lesson or substitutions for the ones already in the lesson. For this lesson in particular, you can give each student a world map to reference during the lesson. You can find more ideas in the orange box on the Classroom Procedure page.

The teacher notes page includes a paragraph with additional guidelines and things to think about as you begin to plan your lesson. Here, it notes that World War II is a vast topic and that this lesson simply aims to give students the most important information. It also notes that students may need some help with the geography of Europe to fully understand the lesson. This page also includes lines that you can use to add your own notes as you’re preparing for this lesson.

The World War II lesson includes four content pages. It begins with a very broad overview of World War II, which happened from 1939 to 1945, including the number of people who died, that there were more than 50 countries involved, and that this war had a deep and lasting impact on the entire world.

Students will learn that many historians believe that the Treaty of Versailles, which ended World War I in 1919, could be considered the primary cause of World War II. In the aftermath of World War I, other countries largely blamed Germany. They owed a lot of money and land to other countries. They had high unemployment, massive inflation, and more that led the people of Germany to be unhappy and have a low quality of life. Germany’s eventual invasion of Poland officially began World War II. Students will also learn that an organization called the League of Nations formed after World War I to help keep the peace, but that the United States and many other countries didn’t join it.

The next section of the lesson describes the leaders of World War II. Students will learn that there were several countries during the 1930s that were lead by dictators – Germany, led by Adolf Hitler; Italy, led by Benito Mussolini; and Japan, led by Emperor Hirohito. Each of these leaders created totalitarian governments to control the citizens of their countries. These leaders promised to make their countries great again, but instead began invading other countries and trying to consolidate their power. Hitler, with his Nazi party, specifically targeted Jewish people, along with other minority groups. This targeted campaign against these groups of people eventually led to the Holocaust, in which they killed an estimated 6 million Jewish people in a genocide. They also murdered another 5 million Communists, Poles, Soviet prisoners, and gay people.

Students will learn that Japan’s Pearl Harbor attack on the United States in Hawaii in 1941 is what officially caused the United States to enter the war and stop being neutral. The U.S., led at the time by President Franklin D. Roosevelt, and Great Britain, led by Winston Churchill, declared war on Japan. The U.S. then became the leader of the Allied Powers, including Great Britain, the Soviet Union, China, and France. The Axis Powers, on the other side of the war, included Germany, Japan, and Italy.

Students will learn that the fighting took place all over the world – in Europe, Northern Africa, and in the Pacific. An important battle in 1944, known as D-Day, was a major turning point in the war. The Allied Powers eventually defeated Germany in 1945, and they surrendered. The U.S. then forced Japan’s surrender by dropping two Atomic Bombs on major cities in Japan, Hiroshima and Nagasaki. These events were absolutely devastating and killed at least 120,000 Japanese people. Japan then surrendered. It was the first and only time people have used nuclear weapons during a war. The countries of the world then formed the United Nations in the aftermath of the war.

The World War II lesson plan includes two worksheets: an activity worksheet and a homework assignment. You can refer to the guide on the classroom procedure page to determine when to hand out each worksheet.

For the activity worksheet, students will use the Internet or other sources to research various events, terms, and people related to World War II. They then write a sentence for each that describes how the person or event relates to World War II. Terms they’ll have to research include Pearl Harbor, Battle of Midway, and Anne Frank.

Once they’ve completed that part of the assignment, students will cut out each rectangle, separating the terms from the sentences about their relevance to World War II. They will then mix these pieces of paper around upside down on their table or desk. Next, they will work with a partner to try to match the terms with their correct sentences. The person with the highest number of correct matches wins! Students will play this game three times, trying to make the most correct matches each time.

The homework assignment asks students to complete a crossword puzzle using clues related to World War II. Some of these clues include “The Treaty of ____ was signed in 1919 ending WWI” and “A military leader who takes complete control of a country.” Students will use what they’ve learned during this lesson to complete the puzzle.

This lesson plan includes answer keys for the homework assignment. If you choose to administer the lesson pages to your students via PDF, you will need to save a new file that omits these pages. Otherwise, you can simply print out the applicable pages and keep these as reference for yourself when grading assignments.

Great teaching resource. I am using it as part of my homeschool curriculum. I have been well pleased with all of your resources. Your company has been a Godsend to my homeschooling family.

So far so good! The World War II unit hasn’t been very helpful!

I just discovered Clarendon Learning and I'm very impressed with this first resource. Can't wait to see what else they have to offer. 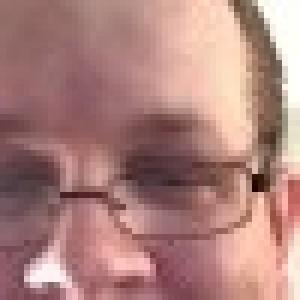 Comprehensive and ready for immediate use!

Very thankful to the team that produces such high quality products that really supplement our homeschool so wonderfully.