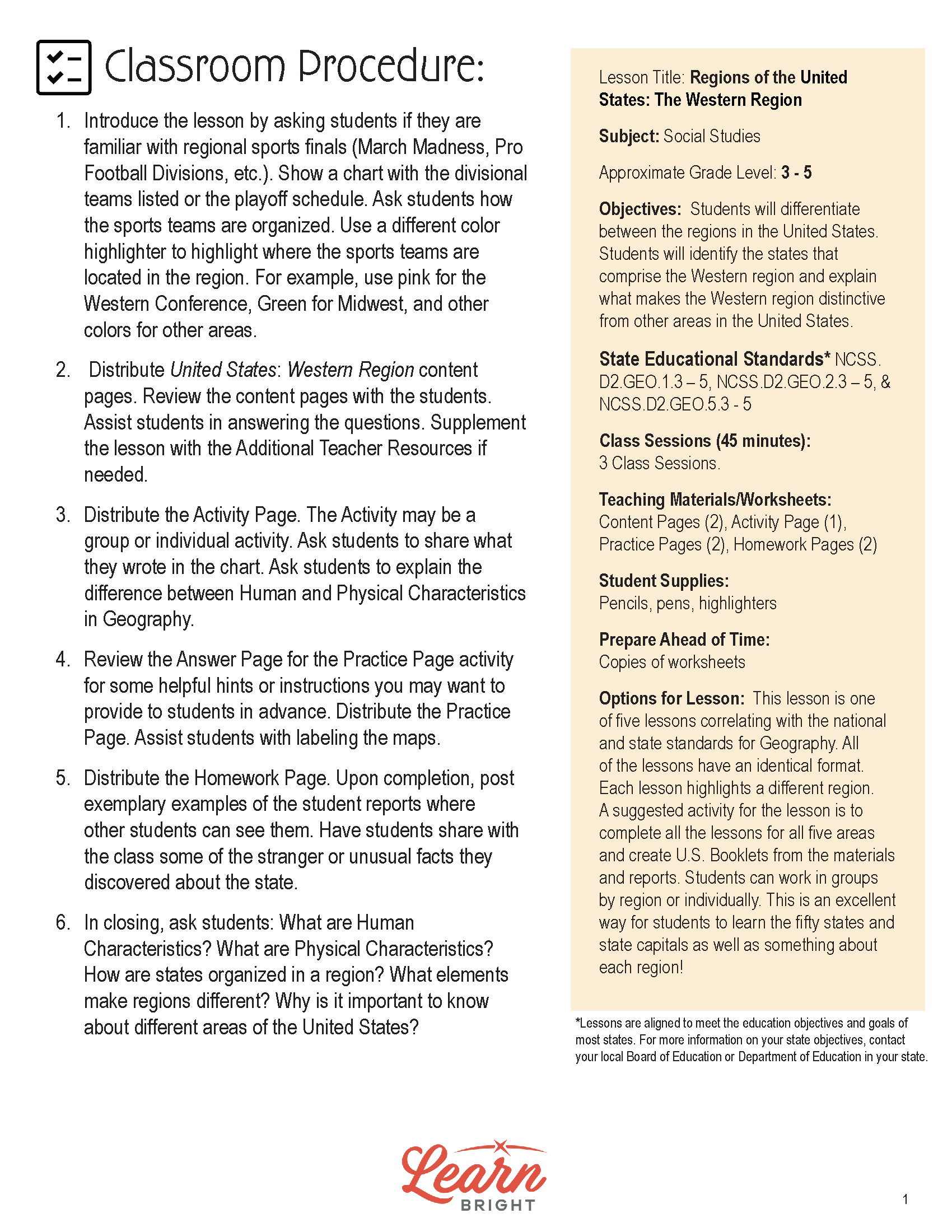 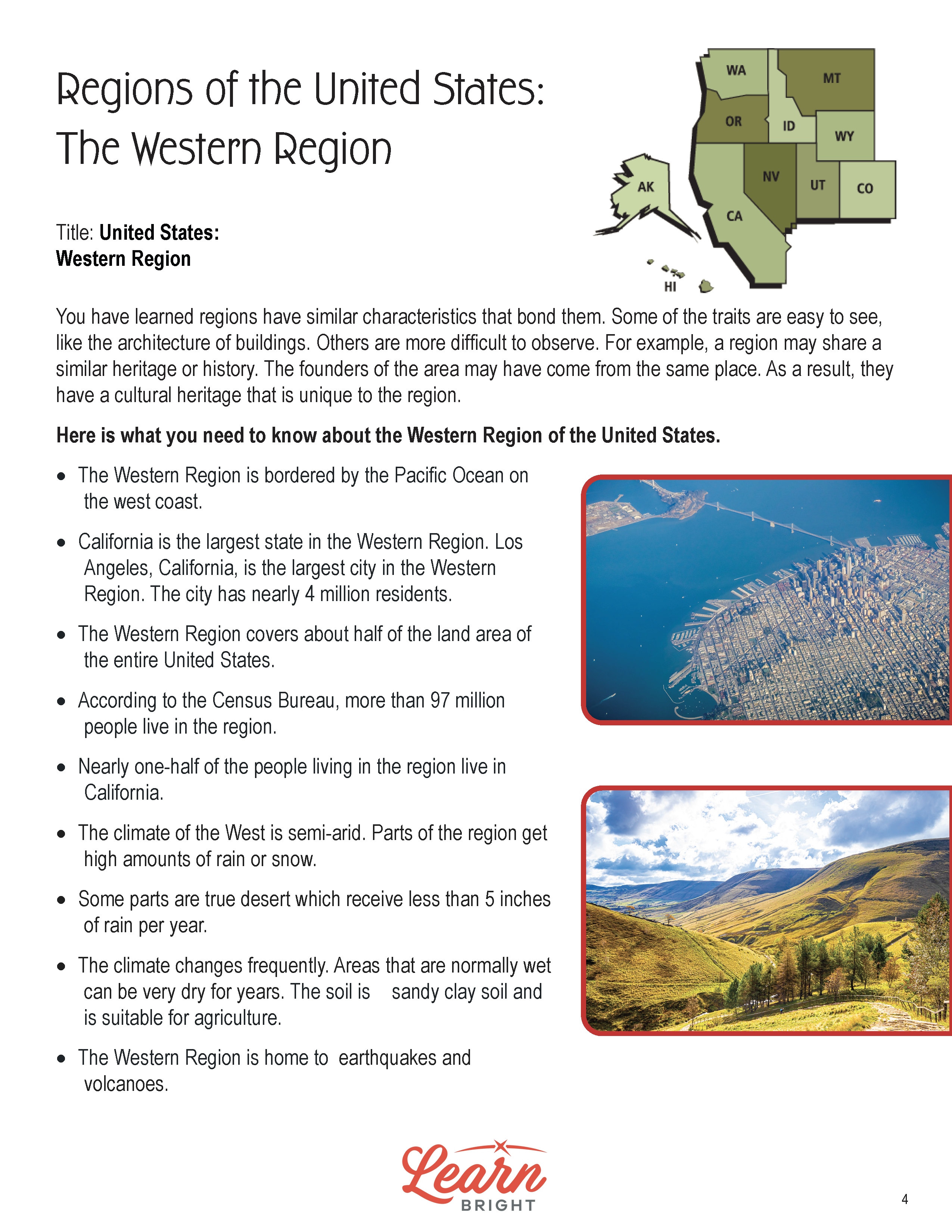 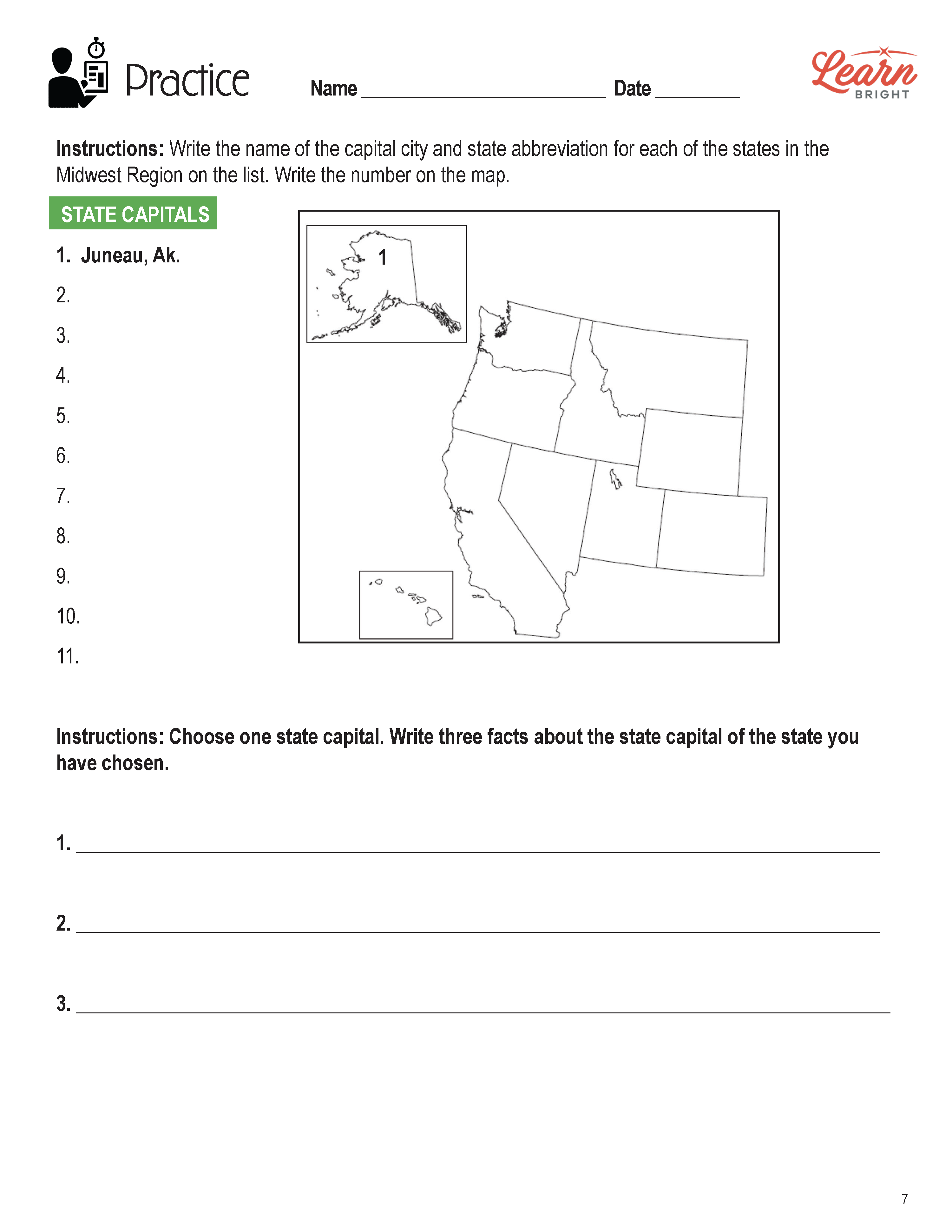 In this lesson, students learn about the states that make up the Western Region of the United States. They will be able to identify important landmarks and characteristics. They will discover how diverse the landscapes are among the different states. For example, Hawaii’s tropical palm trees contrast with Nevada’s dry desert. However, students will learn that even a single state’s weather can vary greatly.

The Western region is home to many national parks, such as Yellowstone and Zion. This feature alone makes some of these states popular tourist attractions. Speaking of tourists, students will get to create posters to attract tourists to a certain state. They will also study many other facts about these unique places. They will have fun learning about the West!

Lesson Objectives and Overview: The United States is most commonly divided into five regions. In the United States Western Region lesson, students will learn about the western states. They will identify landmarks and characteristics of the region that set it apart. The West divides into the Mountain area and the Pacific area. Students will learn to identify which states correspond to each area.

You can use the many resources the lesson provides to illustrate the West. Students will learn about famous events and interesting landmarks, such as Mount St. Helens. The lesson also outlines specific details about each of the states. For example, it lists the state’s capital city and its population. The Western region covers a variety of landscapes, from mountains to desert to tropical. Students will learn about some of the history of the areas as well. For instance, the lesson explains how the Louisiana Purchase attained many of the western states. They will also talk about the Gold Rush and about boomtowns.

In this lesson, students will discover why the states divide into two areas, Mountain and Pacific. They will see how diverse the states are. They will learn about the Rocky Mountains and Death Valley, the Great Basin and the Great Salt Lake. You can explain how different landforms cause varied climates. Alaska is the coldest state, and Hawaii’s island of Kauai gets 40 feet of rain per year.

Students will also learn about the various wildlife that inhabit different states. They will discover that the desert states are home to some of the world’s most venomous snakes. On the other hand, the Hawaiian islands include tropical birds, dolphins, and sea turtles. Even further, in Alaska, they would find polar bears, moose, and wolves.

During the activity, students will create tourism posters to market the Western region. They will use what they learned during the lesson and draw or download pictures. After they complete the activity, they will answer questions about the region. For instance, they will explain which state they would most like to visit and why. The activity can be graded with a point system.

The practice worksheet will require some memory work. Students have to list the states of the Western region in alphabetical order. Then, they will try to list the states from most to least populated. After that, they will write the capital city of each state. Finally, they will have to answer several questions about random facts from the lesson.

The homework will test students’ knowledge and memory again. They will match the states to corresponding facts, landmarks, or cities. Then they will have to describe the significance of seven different numbers. For instance, 1849 is a date related to a significant event in the Western region. The number 134 is the highest recorded temperature somewhere. They will have no information apart from the number.