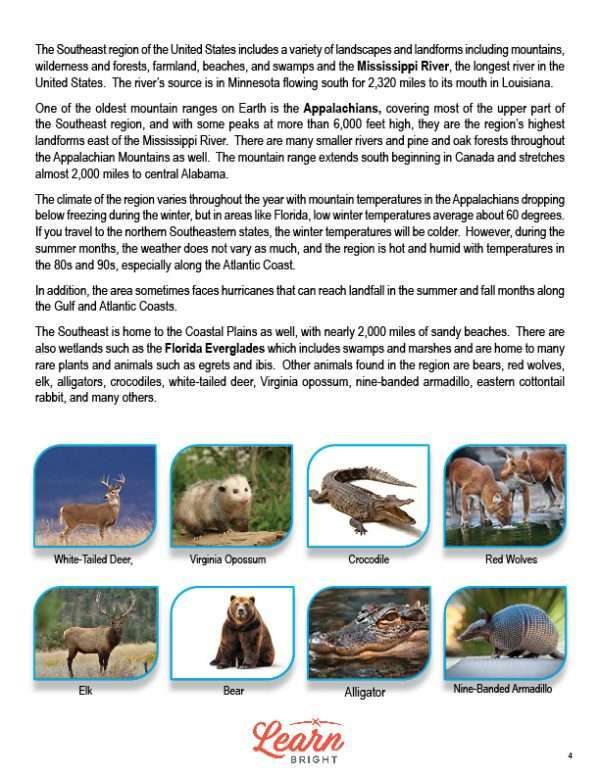 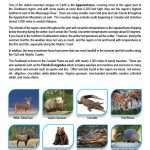 United States Southeast Region explores the 12 states of this corner of the nation. Students will discover so much about the wildlife, climate, and history of this region of the U.S. They will learn about one of the oldest mountain ranges in the world, the Appalachians. They will also learn about the swamps in the wetlands of the Florida Everglades. Other important topics include the Trail of Tears, the Confederate States of America, and plantations.

The Southeast region is full of diversity and culture. Through their research during the activity, students will identify lots of unique facts about these states. Several national parks cover some of these areas. And students may even recognize a few of the famous landmarks, such as Disney World and Fort Knox.

United States Southeast Region contains lots of facts about these special states. Similar to other lessons on the nation’s regions, it provides history, facts, and fun activities. Students will learn about many topics throughout the lesson. They will discover that some states wanted to secede from the country due to issues with slavery. The contentions led to the start of the Civil War.

Students will also learn about some of the famous landmarks that dot the states in this region. They will talk about famous historical figures like Helen Keller and Martin Luther King Jr. The lesson also introduces them to the many animals and wildlife that call the Southeast home.

This lesson begins with several pages of content from which to draw information. Students will learn about various landmarks, historical figures, wildlife, and events that define the region. A few of the states were among the 13 original colonies. That means there is a lot of early history in some of these states. Thomas Jefferson’s home, for instance, was in Monticello, Virginia. And the Rosa Parks Museum and Library is located in Alabama.

The lesson introduces the variety of landscapes that cover the Southeast region. From swamps to sandy beaches to farmland, there is much to discover. Students will explore the many species of wildlife as well, such as bears, alligators, and elk. There are many suggestions in the “Objects for Lesson” section to aid in your instruction.

For the activity, students will create tourism posters for a state you assign to them. You can have them work with partners or in groups if you wish. The worksheet lists several resources to use for collecting info and artwork for the posters. Students will answer a few questions after they complete the posters.

In the first part of the practice worksheet, students will match capital cities to the correct state. In the next part, they will match other cities, attractions, and people to the state it represents. For example, Hellen Keller would match with Alabama because it is her birthplace. Finally, they will list the states from most to least populated.