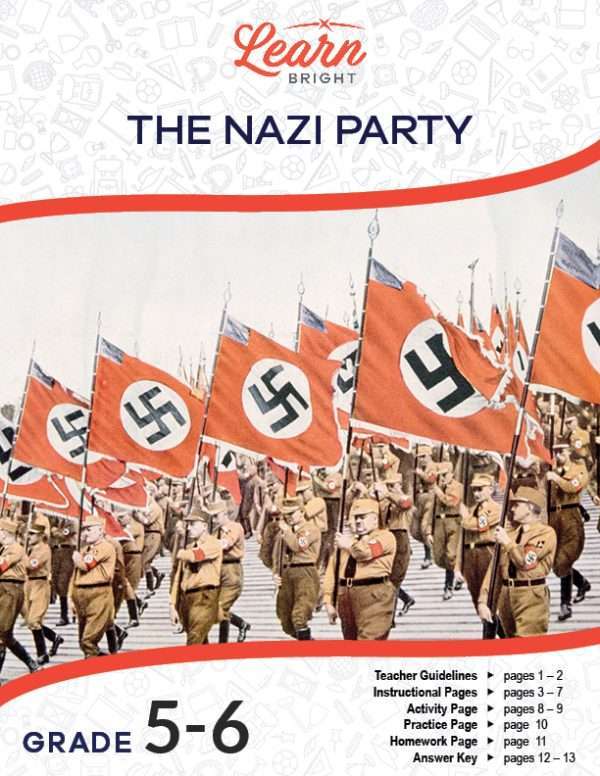 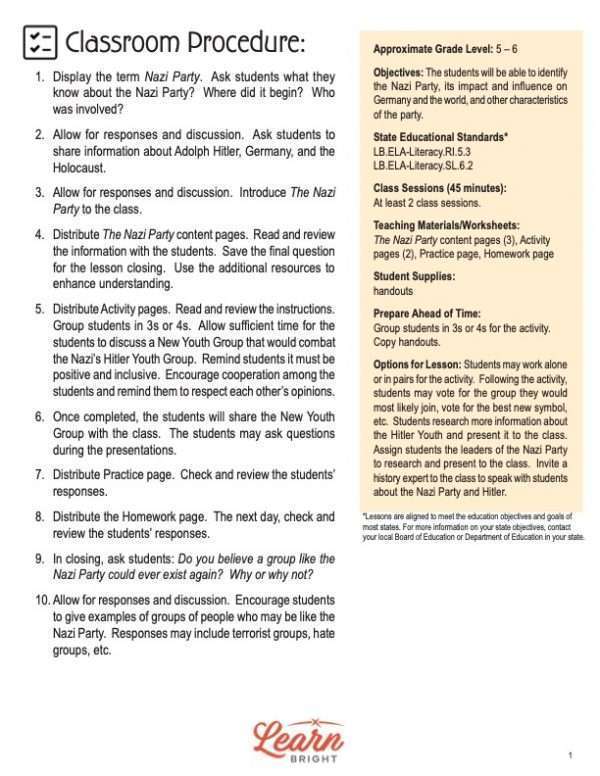 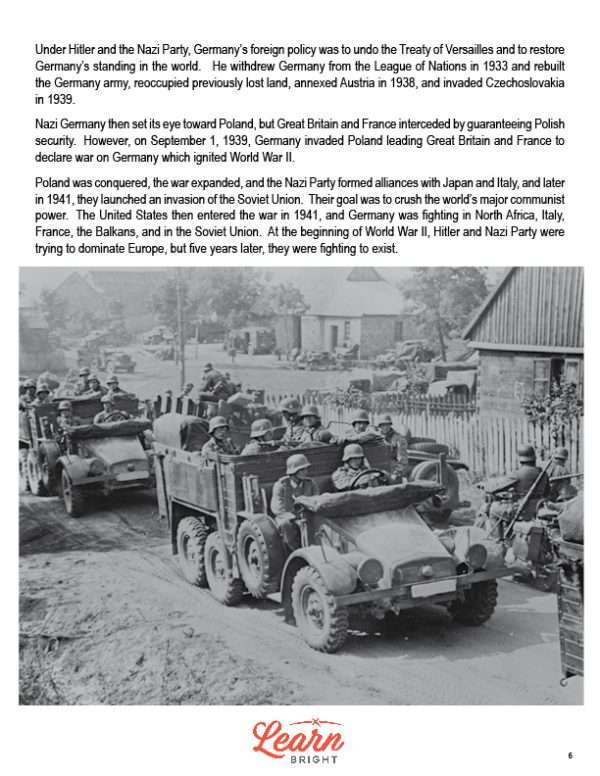 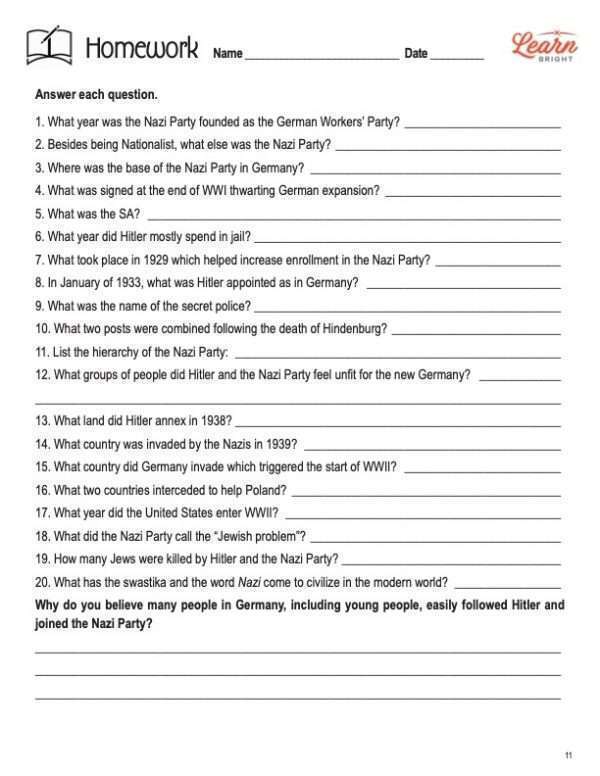 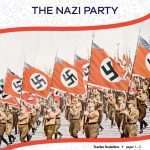 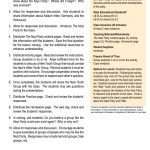 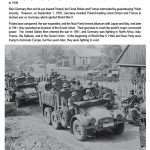 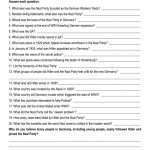 Nazi Party is a great lesson for 5th and 6th grade students. It teaches them about this dark and difficult time in the world’s history and how Germany in particular was affected by Nazi rule. Students will learn about the tragedy of the Holocaust and about the awful realities that the Jews faced in Nazi concentration camps.

While this lesson covers a very serious topic, it is still designed to engage students in their learning. The activity is especially designed to help students think about good alternatives for bad things. The suggestions in the “Options for Lesson” section provide additional ideas.

Lesson Objectives and Overview: Nazi Party introduces students to the extremist German political group from the early to mid-1900s. It describes its influence and impact both on the German nation as well as on the world as a whole. Students may have heard the term Nazi, but they may not fully understand what it means. They will learn about how the group started, what their ideals and beliefs were, and how they were defeated. This lesson is for students in 5th grade and 6th grade.

Every lesson plan provides you with a classroom procedure page that outlines a step-by-step guide to follow. You do not have to follow the guide exactly. The guide helps you organize the lesson and details when to hand out worksheets. It also lists information in the orange box that you might find useful. You will find the lesson objectives, state standards, and number of class sessions the lesson should take to complete in this area. In addition, it describes the supplies you will need as well as what and how you need to prepare beforehand. For this lesson, the only supplies you will need are the handouts. To prepare for this lesson ahead of time, you can put students into groups for the activity and copy the handouts.

Included with this lesson is an “Options for Lesson” section that lists a number of suggestions for activities to add to the lesson or substitutions for the ones already in the lesson. For this lesson, an optional addition would be to have students do more research on the Hitler Youth and present their findings to the class. You could also assign each student a leader of the Nazi Party to research and present. Finally, you could invite a historian or other expert to come speak to your class about this topic.

The Nazi Party lesson plan includes five content pages. This lesson begins with the origin of the Nazi Party, which was a political party founded in Germany in 1919 that was brought to power in the early 1930s by a man named Adolph Hitler. Students will learn that they also called the Nazi Party the National Socialist German Workers’ Party and the German Nationalsozialistische Deutsche Arbeiterpartei (NSDAP).

Hitler did not actually found the Nazi Party, as many people believe. A man named Anton Drexler founded it, and Hitler attended one of the early meetings of the party. He was the 55th member. He later rose through the ranks and took over leadership of the party with a 25-point plan for the party. His leadership and Nazi 25-Point Program made the party more and more Nationalist, racist, anti-Semitic, anti-capitalist, and anti-Communist.

Students will learn that, in the early days of Hitler’s leadership in the party, they began to campaign and fight for the expansion of German territory. Basically, this meant that they wanted Germany to be bigger! They chose the swastika as their party symbol and formed the Hitler Youth. Students will learn that they got more and more radical and violent over time and even tried to take over the Bavarian state government in 1923! They failed. The government banned the party and sent Hitler to prison. Following this failed attempt, they decided to try to gain power legitimately and started running for elected government seats. This happened quickly. By 1933, Hitler became Chancellor of Germany.

Next, students will learn about the Nazi Party’s rise to power in the 1930s and 1940s. In 1933, the Nazis had a majority in Parliament and they passed the Enabling Act. This allowed Hitler to make whatever laws he wanted without consulting Parliament. He used this power to ban all other political parties and force all teenagers to join the Hitler Youth, along with many other things. Hitler became Fuhrer and dictator of Germany in 1934 and stayed in power until the end of World War II in 1945.

The Nazi Party took over everything in Germany in the early 1930s. They made party membership mandatory. The Nazis killed anyone who disagreed or refused, or sent them to a concentration camp. They opened the first concentration camp in 1933. This was originally a place for Hitler to send political prisoners and evolved into a death camp later on. The people sent there were Jews, artists, intellectuals, Gypsies, people who were physically or mentally handicapped, and people who were gay.

Hitler and the Nazi Party began aggressively pursuing the expansion of Germany. They prepared to invade Poland by the late 1930s. However, Great Britain and France intervened. They invaded Poland anyway, which was the official beginning of World War II. They formed alliances with Japan and Italy and started fighting on multiple fronts.

Finally, students will learn about persecution of Jewish people that was a major part of the Nazi Party and Hitler’s agendas. In Germany, they first discriminated against Jewish people, then banned them from most public places, then sent them to concentration camps.

They called the plan to eradicate the Jewish people in Europe through the use of death camps the “Final Solution.” This included Jews in Germany, Poland, the Soviet Union, France, and Belgium, all places invaded by the Nazis. The most well-known camp was called Auschwitz, which operated in Poland and killed thousands of Jewish people every day. They murdered over 6 millions Jewish people in camps during the war.

These murders slowed down and stopped near the end of the war because the Nazis retreated. Following the defeat of the Nazi Party, outside forces outlawed the party and took over Germany. Hitler committed suicide. The Germans have tried to eradicate Nazi symbols and many Nazi leaders faced trial for war crimes between 1945 and 1949. They called these the Nuremberg Trials.

The Nazi Party lesson plan includes three worksheets: an activity worksheet, a practice worksheet, and a homework assignment. You can refer to the guide on the classroom procedure page to determine when to hand out each worksheet.

For the activity, students will divide into groups and create a new youth organization. The goal is to create a group that does not mimic the immoral ideals of Hitler Youth. First, students will name the group and then write 10 rules that these youth must follow. Next, they will list the types of activities these youth could enjoy. Students will then write five views or beliefs that they would teach their youth group. Finally, they will create a symbol for the new group.

Students can either work alone or in pairs for this activity if you’d prefer.

The worksheet lists 15 terms or people from the lesson material. Students must describe how each person, place, or thing is significant as it relates to the Nazi Party. Afterward, there is a list of six people. Students must match the person to their title in the party. The titles are in a word bank on the right.

There are 20 questions on the homework assignment that students must answer. Students must also answer a question that asks them to explain why they think people in Germany followed Hitler.

This lesson plan includes answer keys for the practice worksheet and the homework assignment. No answer key is provided for the activity worksheet because every group’s youth group will have different rules and symbols. If you choose to administer the lesson pages to your students via PDF, you will need to save a new file that omits these pages. Otherwise, you can simply print out the applicable pages and keep these as reference for yourself when grading assignments.

There are no reviews yet.

Be the first to review “Nazi Party” Cancel reply