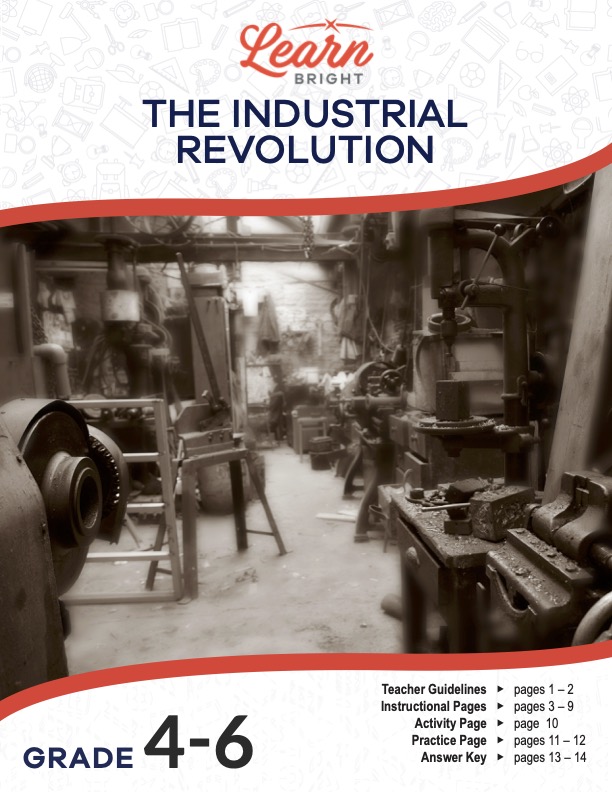 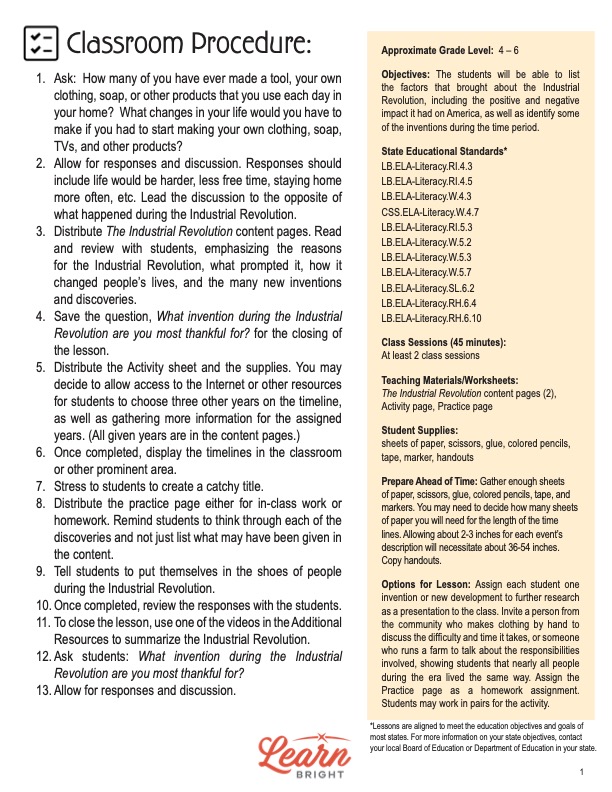 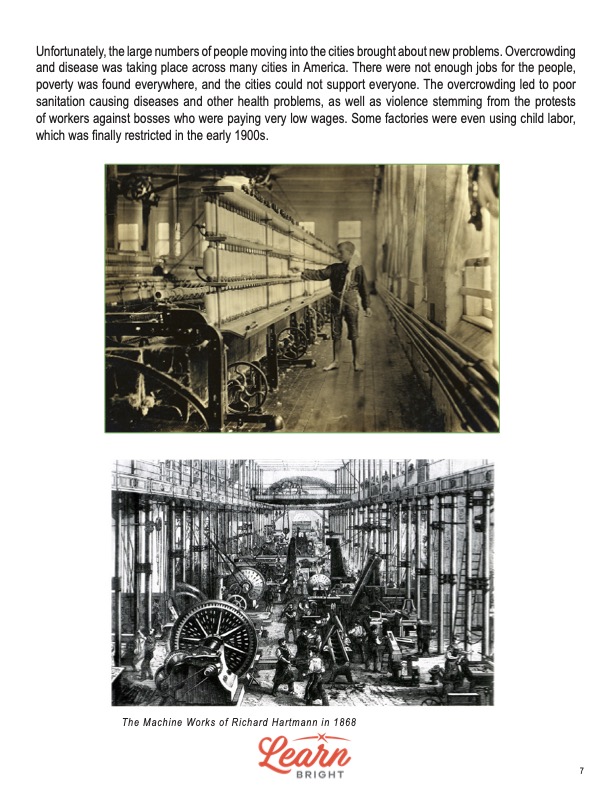 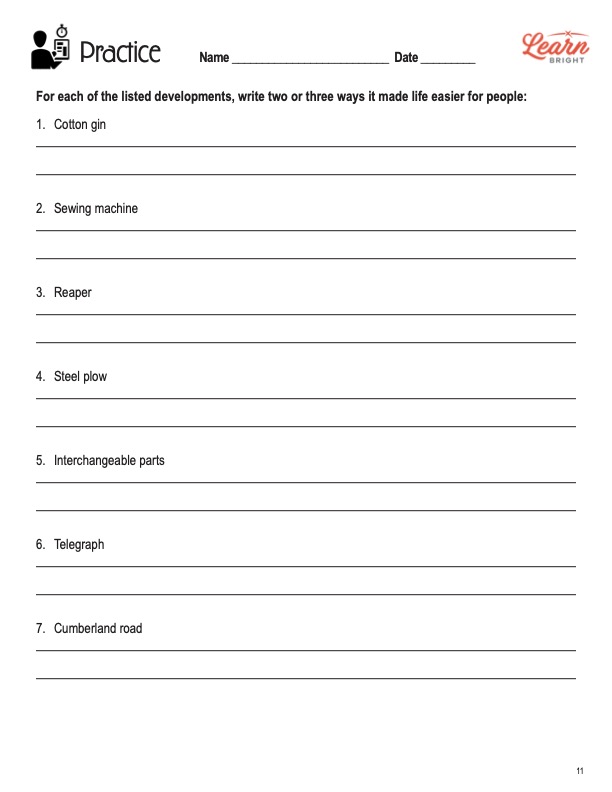 Industrial Revolution teaches students about this period in American history, including what it was, when it happened, and its lasting impact on the world. Students will also learn related vocabulary and specific innovations that happened during those years.

The “Options for Lesson” section on the classroom procedure page offers additional options or suggestions for this lesson. One idea is to assign students an invention or development to research and present during class. Another idea is to invite a local artisan or farmer into class to talk about their work.

Lesson Objectives and Overview: Industrial Revolution teaches students about this time period, including what it was, when it happened, and the factors that brought it about. Students will be able to discuss the positive and negative effect industry had on the United States. They will also be able to identify some important inventions from that time. This lesson is for students in 4th grade, 5th grade, and 6th grade.

Every lesson plan provides you with a classroom procedure page that outlines a step-by-step guide to follow. You do not have to follow the guide exactly. The guide helps you organize the lesson and details when to hand out worksheets. It also lists information in the yellow box that you might find useful. You will find the lesson objectives, state standards, and number of class sessions the lesson should take to complete in this area. In addition, it describes the supplies you will need as well as what and how you need to prepare beforehand. Supplies you need for this lesson include paper, scissors, glue, colored pencils, tape, and markers.

The “Options for Lesson” section lists a number of suggestions for activities to add or substitutions for the ones already in the lesson. One idea is to assign each student one invention or new development to further research. The students can later present what they found to the class. Another option is to invite a person from the community who makes clothing by hand to discuss the difficulty of the task. Or you could invite someone who runs a farm to talk about their responsibilities and demonstrate that nearly all people during the era lived the same way. One more option is to assign the practice page for homework rather than an in-class assignment.

The teacher notes page includes a paragraph with additional guidelines and things to think about as you begin to plan your lesson. It mentions to focus on the general concepts and main inventions rather than specific dates and in-depth background. The topic of the Industrial Revolution is complex and could be taught for an entire quarter. This page also includes lines that you can use to add your own notes as you prepare for this lesson.

The Industrial Revolution and How It Began

The Industrial Revolution lesson plan includes seven content pages. The first few pages provide an overview of the period in the United States and describes how it started and where it came from. To start off, the lesson explains that the Industrial Revolution dramatically changed the way people lived and worked. People used to make their clothes and shoes and other things at home. But now people manufactured these products in factories.

At one time, people used hand tools or simple machines to build or make things they needed for everyday life. Such things included clothes, furniture, and even their food. The Industrial Revolution, which began in 1820, changed the world. The production of goods changed from home to factories.

The birthplace of the revolution was in Great Britain. Great Britain had many resources in raw materials that were necessary to power factories and industrial plants. At this time, Great Britain shipped its products to the United States. This all stopped because of the Embargo Act of 1807, which ended the import and export of products from other countries. The War of 1812 also had an effect as it forced the U.S. to become more independent and not as reliant on other countries for products.

These two main events also led to the expansion of transportation and the efficient and additional use of electricity. It also resulted in industrial processes that increased the production of goods in America. And along with all of that, the period in general brought about many important events, inventors, and inventions.

Key Inventions and the Farm Industry

One of the most significant inventors and inventions of these decades was Eli Whitney and the cotton gin. He invented it in 1794, effectively speeding up the process of separating the cotton seeds from the fiver. Up to this point, people did this by hand with a spinning wheel. The invention was especially useful in the South. The people there sent the raw cotton northward to be manufactured or weaved into cloth.

The cotton gin invention also helped Whitney come up with the idea of interchangeable parts. In other words, people could use standard parts on different types of machines. It lowered the cost and increased efficiency of manufacturing. The first interchangeable part Whitney produced was used for muskets, a type of gun that soldiers of the era commonly used.

In 1846, Elias Howe invented the sewing machine, which naturally sped up the production of clothing. Eventually, people didn’t have to make their clothes at home anymore. The lesson shows pictures of both the cotton gin and an antique sewing machine.

Students will discover that other improvements happened in the farm industry. For instance, John Deere invented the first steel plow in 1837 to help farmers grow crops faster and more efficiently. The improvements in farming, along with the development of factories and producing goods outside the home, led people to move from farmlands into cities.

Unfortunately, the large influx of people into the cities brought new problems. The cities couldn’t support everyone coming in. Overcrowding and disease affected people in many cities across the states. There weren’t enough jobs to go around, so poverty was quite common. The overcrowding led to poor sanitation, health problems, and violence.

Communication, Transportation, and Other Inventions

The first national road or highway was Cumberland Road, which began construction in 1811. Robert Fulton invented the first steamboat in 1793. The boat needed an engine, so they used James Watt’s reliable steam engine, which he had built over a century earlier in 1775. In addition, workers finished the Erie Canal in 1825, creating a route from the Atlantic Ocean to the Great Lakes.

A transcontinental railroad was completed in 1869 at Promontory, Utah. It helped increase trade and travel across the states and linked the most important Midwest cities with the entire Atlantic coast. Businesses could far more easily move material, products, and other supplies between the producers and consumers.

There were several other notable inventions during the Industrial Revolution. Thomas Edison invented the electric lamp in 1878, and Alexander Graham Bell invented the telephone in 1877. And the first automobile was invented by Karl Benz in 1885. Altogether, the Industrial Revolution is responsible for vastly improving our access to products from the food we eat to the clothes we wear, and so much more.

The Industrial Revolution lesson plan includes two worksheets: an activity worksheet and a practice worksheet. They will both help reinforce the lesson material in different ways. Students will complete all of these worksheets on their own. You can refer to the guide on the classroom procedure page to determine when to hand out each one.

For the activity, students will create a timeline of the Industrial Revolution. They will use year labels that they cut out and paste onto a separate piece of paper. Students will fill in the timeline with relevant inventions and significant events. Then they will come up with a creative title for their timeline. If you want, you can have students work in pairs for this activity.

Students will describe how 14 different developments during this time period made life easier for people. These developments include the cotton gin, the sewing machine, the reaper, and the steel plow. You can assign the practice worksheet as a homework assignment if you wish.

This lesson includes answer keys for both worksheets. The answers may vary for both of these worksheets given the nature of the assignments. For the activity worksheet, students may have chosen to include different events or different descriptions of the events on their timelines. For the practice worksheet, students may write different ways that each development made life easier, which is objective. You can use your best judgement, in addition to the options provided on the answer key, to evaluate the worksheets. If you choose to administer the lesson pages to your students via PDF, you will need to save a new file that omits these pages. Otherwise, you can simply print out the applicable pages and keep these as reference for yourself when grading assignments.

Wonderfully put together!! Love the video to go along with the lesson!! Thank you so much!

Absolutely perfect for teaching 6th graders!! Will recommend to other teachers!

I found much of what I needed.

Great resources to supplement my unit on the industrial revolution.

I have a very mixed year group and this resource was great for them. Thank you

This was a fantastic resource. I teach CLIL to secondary students in Japan and Clarendon resources have been invaluable in helping plan and deliver lessons.