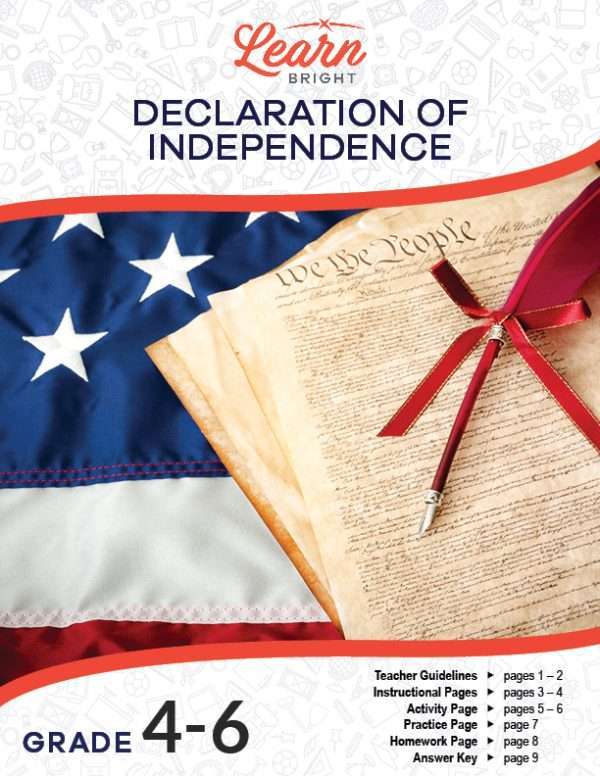 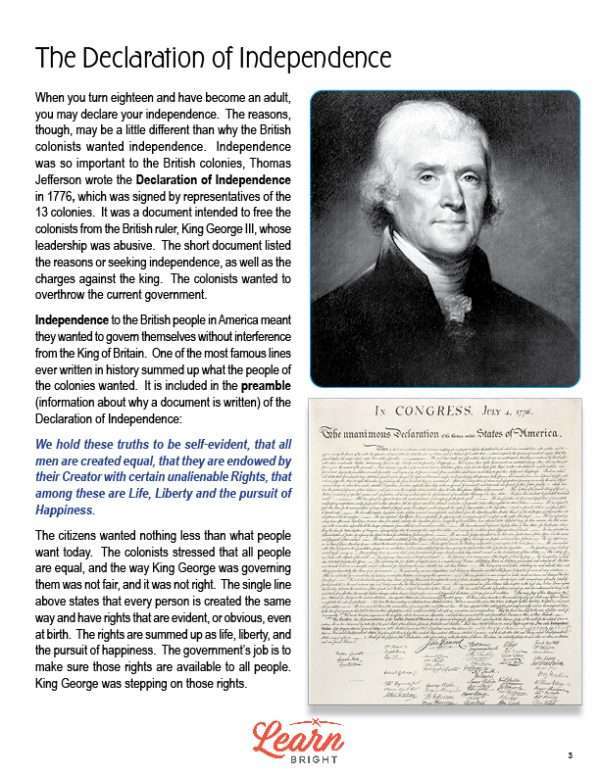 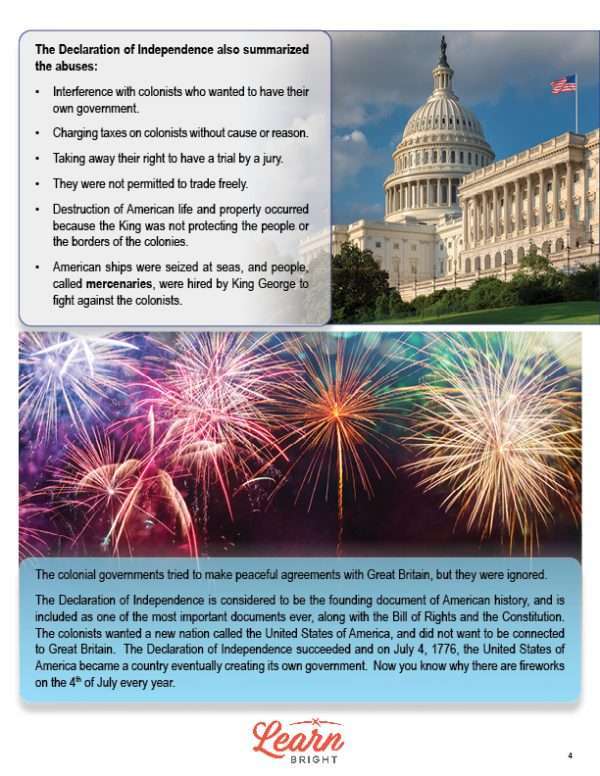 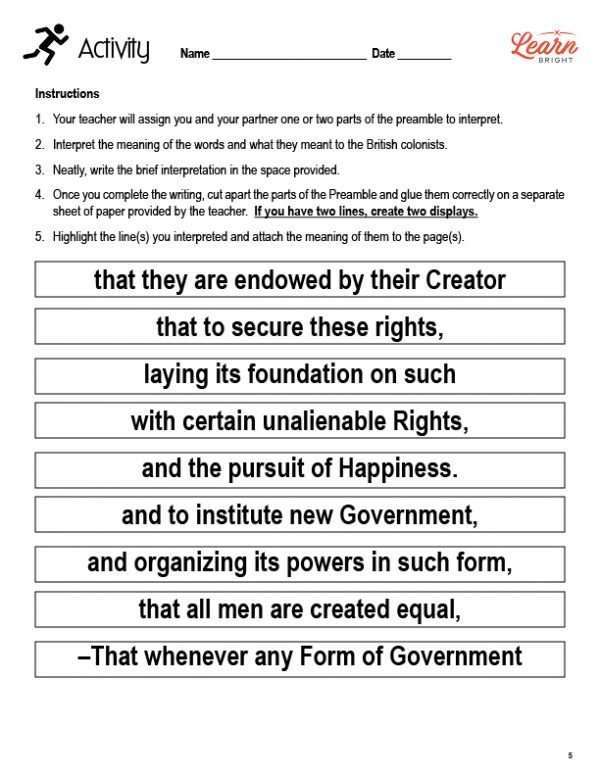 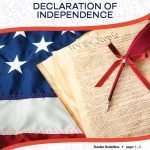 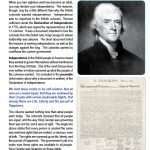 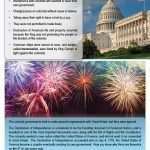 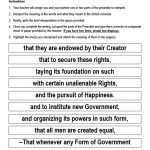 Declaration of Independence teaches students all about this important and foundational document written by Thomas Jefferson in 1776. Students will learn why it was written, what problems the colonists had with the rule of King George III, and more. They will also learn about the important message of the preamble.

Included with this lesson plan is an “Options for Lesson” section that lists optional additions or adjustments. For this lesson, it suggests assigning each student signer of the Declaration of Independence to do additional research on.

What our Declaration of Independence lesson plan includes

Lesson Objectives and Overview: Declaration of Independence identifies the meaning of the document and interprets different parts of it, including the preamble. Students will also learn about the many grievances that the colonists had against Great Britain and King George III. This lesson is for students in 4th grade, 5th grade, and 6th grade.

Every lesson plan provides you with a classroom procedure page that outlines a step-by-step guide to follow. You do not have to follow the guide exactly. The guide helps you organize the lesson and details when to hand out worksheets. It also lists information in the orange box that you might find useful. You will find the lesson objectives, state standards, and number of class sessions the lesson should take to complete in this area. In addition, it describes the supplies you will need as well as what and how you need to prepare beforehand. For this lesson, the supplies you will need are scissors, glue, construction paper, highlighters, full copies of the Declaration of Independence or a way for students to access it, colored pencils, and the handouts. In order to prepare for this lesson ahead of time, you can gather the supplies, and copy the handouts.

Included with this lesson is an “Options for Lesson” section that lists a number of suggestions for activities to add to the lesson or substitutions for the ones already in the lesson. One potential addition to the lesson is to assign each student a signer of the Declaration of Independence to research. You can also give them time to memorize the preamble before the first day of the lesson. Additionally, you can encourage students to dress in red, white, and blue on the first day. You can start off the lesson with snacks and a celebration! You can also swap the homework assignment and practice worksheet if you’d like to.

The teacher notes page includes a paragraph with additional guidelines and things to think about as you begin to plan your lesson. It notes that you should make sure that students have access to the full document as a part of this lesson. This page also includes lines that you can use to add your own notes as you’re preparing for this lesson.

The Declaration of Independence

This lesson includes two content pages. The first part of this lesson provides some background information about who wrote the Declaration of Independence and why. Thomas Jefferson wrote this document, which was fundamental in the founding of the United States, in 1776. Representatives from all 13 British colonies then signed it. He wrote this document to declare independence from Great Britain and its ruler, King George III. Students will learn that King George III did not treat the colonies well. The Declaration of Independence, in addition to declaring independence, also listed out all of the reasons that the colonies wanted to be free from the rule of Great Britain.

Students will learn that wanting to be independent meant that the British colonists wanted to be free of the rule of Great Britain and wanted to govern themselves without interference. They did not like the way that King George III treated them. Thomas Jefferson wrote a very famous line in the preamble to the Constitution that includes the phrase “life, liberty, and the pursuit of happiness.” This is essentially what the colonies wanted. A preamble is the part of a document that explains why they wrote the document.

Students will learn that the colonists desired to be treated equally, but that King George III did not govern them in that way. They felt as though they were being denied their rights and the ability to pursue happiness.

The next part of this lesson focuses on the abuses included in the Declaration of Independence. Students will learn that there were many issues: interference with the colonists who wanted their own government; the charging of taxes on colonists without reason; the fact that they had taken the right to a jury trial away; that they were not able to trade freely and openly; that there had been destruction of American life and property because the King would not protect the borders; and that the British had captured American ships at sea and that King George had hired mercenaries to fight against the colonists.

Students will learn that the colonists originally tried to come to a peaceful agreement with the British, but the British ignored them. They will also learn that, today, we consider the Declaration of Independence to be the foundational text of American history and one of the most important documents ever! The Bill of Rights and the Constitution are other documents that fall into this category.

The Declaration of Independence was a success, and on July 4, 1776, the United States of America became a country! This is why we celebrate Independence Day on July 4th every year.

The Declaration of Independence lesson plan includes three worksheets: an activity worksheet, a practice worksheet, and a homework assignment. You can refer to the guide on the classroom procedure page to determine when to hand out each worksheet. All of these worksheets test the students’ understanding of the lesson material.

For the activity worksheet, students work in pairs. They interpret one or two parts of the preamble, as assigned. They need to interpret the meaning of the words as well as what they would have meant to the British colonists. Next, they write their interpretation down and then cut up the provided parts of the preamble and glue them on a separate piece of paper in the right order. Finally, they highlight the lines they interpreted and attach their interpretation of those lines to the paper.

Students can also work alone or in groups of three for this activity.

The practice worksheet asks students to read ten statements from the Declaration of Independence. They must then describe, in their own words, what each statement means. Each of the statements is about King George. For example, they will have to explain what “He has refused his Assent to Laws, the most wholesome and necessary for the public good” means in this context. Students are welcome to use a dictionary for help if they do not know the meaning of various words in the statements.

This lesson plan includes answer keys for the crossword homework assignment. No answer key is provided for the activity worksheet or practice worksheet because students’ answers will vary for those assignments. If you choose to administer the lesson pages to your students via PDF, you will need to save a new file that omits these pages. Otherwise, you can simply print out the applicable pages and keep these as reference for yourself when grading assignments.

I was a long term sub. I was very happy to find this unit. The unit was easy to use. The reading level was great for 4th grade. Good activities.

This is my first year teaching and the kids love the different activities this lesson offered.

The Declaration of Independence

I use for reference material to check facts, found your work very helpful. Thanks for the good job.

This was a great for

This was a great for my students, it really helped then un-pack and understand this document. Well thought out thank you!

A taste of history

I didn't have time to teach about the Declaration in depth, but this resource allowed me to introduce the topic and give my 5th graders an opportunity to actually read a part of the Declaration and do an engaging activity. I also really like the links to other resources, especially videos.