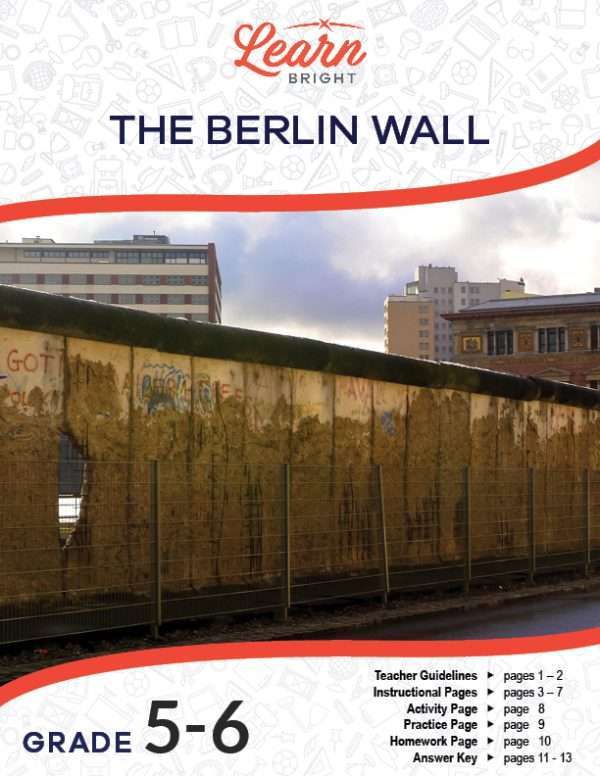 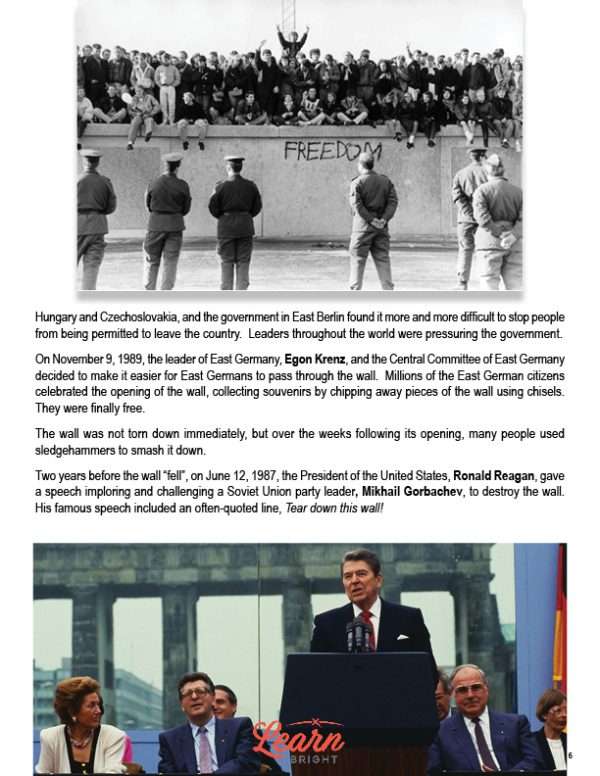 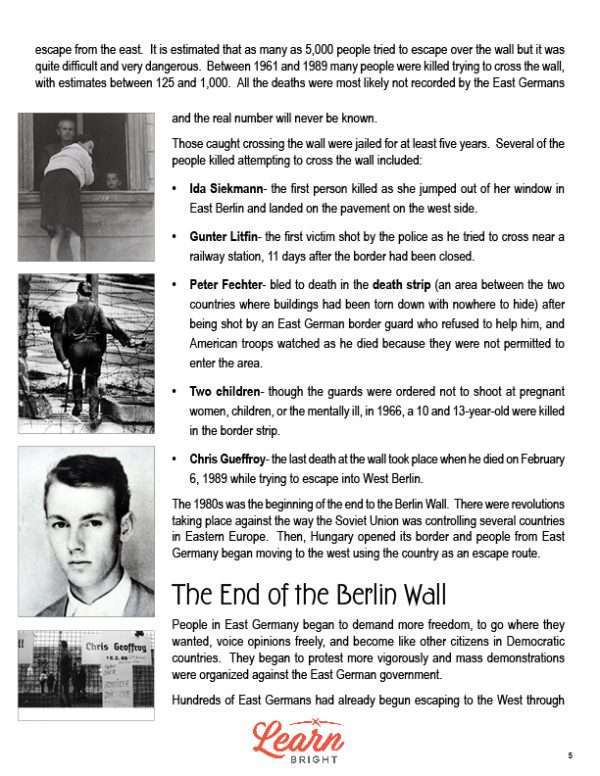 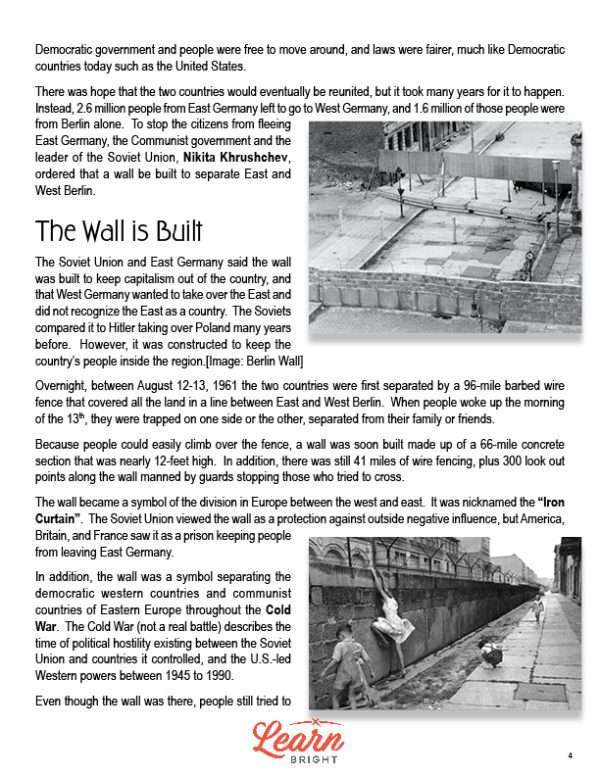 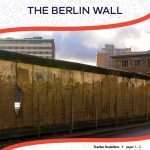 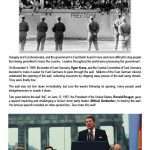 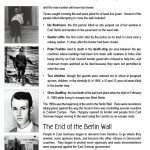 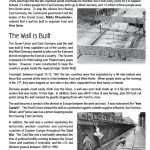 In our Berlin Wall lesson plan, students learn about the history of the Berlin Wall and its significance in terms of both WWII and the Cold War. Students learn its original purpose and the circumstances that led to its demolition in the 1980s. They will also learn about Ronald Reagan’s famous speech.

Included with this lesson are some optional additions or adjustments that you can make to the lesson material. For example, it suggests that you invite someone who remembers the construction and demolition of the wall to come to your class and talk about what it was like living through that time.

Lesson Objectives and Overview: Berlin Wall introduces students to the Berlin Wall, which they may have heard about but likely do not understand the history of, and its relationship to World War II and the Cold War. The lesson introduces the students to the history of the wall, from its construction, its use, and to its fall. At the end of the lesson, students will define the Berlin Wall, identify and explain its original purpose, the use of the wall, and the circumstances leading to its demolition. This lesson is for students in 5th grade and 6th grade.

Every lesson plan provides you with a classroom procedure page that outlines a step-by-step guide to follow. You do not have to follow the guide exactly. The guide helps you organize the lesson and details when to hand out worksheets. It also lists information in the orange box that you might find useful. You will find the lesson objectives, state standards, and number of class sessions the lesson should take to complete in this area. In addition, it describes the supplies you will need as well as what and how you need to prepare beforehand. For this lesson, you will need the following supplies: scratch paper, construction paper, colored pencils, and the handouts. To prepare for this lesson ahead of time, you can gather the supplies and copy the handouts.

Included with this lesson is an “Options for Lesson” section that lists a number of suggestions for activities to add to the lesson or substitutions for the ones already in the lesson. One optional addition to this lesson is to invite someone who remembers the construction or demolition of the Berlin Wall to come speak to your class about that experience and what it was like to live through that time in history. Another additional activity is to have your students research other historical walls that have been built throughout history and present their findings to the class. Finally, you can show your class a video of President Ronald Reagan’s speech and have them discuss its impact. You can also have them write their own speech to encourage the tearing down of the Berlin Wall.

The teacher notes page includes a paragraph with additional guidelines and things to think about as you begin to plan your lesson. It notes that while many students will have likely heard of the Berlin Wall, they may not know its history, significance, and connection to both the Cold War and WWII. This page also includes lines that you can use to add your own notes as you’re preparing for this lesson.

The Wall is Built

Students will learn that they constructed the wall overnight between August 12 and 13, 1961. They originally made it out of barbed wire. People could still cross this wall so they built a larger, more permanent wall made out of concrete that was 66 miles long and 12 feet high! They also set up 300 guard posts to watch the wall and stop people from crossing over. Students will learn that they also called this wall the “Iron Curtain.” The Soviet Union viewed this wall as a way to keep outside influences, like capitalism, out of East Germany. However, other countries saw it as a prison keeping the people of East Germany in. The wall also represented the ongoing conflict between democratic western countries and communist countries of eastern Europe called the Cold War. This was a time of political hostility between the two sides that lasted from 1945 to 1990.

The End of the Berlin Wall

In the 1980s, people living in East Germany began fighting for their freedom and the ability to leave the country. They staged mass demonstrations and organized protests. Additionally, many world leaders began speaking out about this issue. The leader of East Germany opened the wall in late 1989 to great celebration. They did not start destroying the wall for a while, but regular people began breaking pieces of it down with sledgehammers and other tools.

Students will also learn that two years before the wall was opened, United States President Ronald Reagan gave a speech at the Brandenburg Gate. He gave this speech to mark the 750th anniversary of Berlin. During this speech, he urged the Soviet Union to tear down the wall. This speech has become very famous because many people believe it directly led or contributed to the wall falling.

Finally, students will learn that the government officially destroyed the wall in 1990. Some pieces of the wall still exist, but are not operational. They’ve preserved these parts of the wall for historic purposes. Germany was also reunified in October 1990. Today, it is a unified, democratic country.

The Berlin Wall lesson plan includes three worksheets: an activity worksheet, a practice worksheet, and a homework assignment. You can refer to the guide on the classroom procedure page to determine when to hand out each worksheet.

Students will work with a partner to complete this activity. The pairs will work together to discuss and answer three questions related to President Ronald Reagan’s famous speech. They will then use construction paper to create a wall between countries that they think would encourage safe travel. They have to include an opening in the wall, signs, and more.

Students can also work either alone or in larger groups for this activity if you’d prefer.

For the practice worksheet, students will complete two exercises. The first exercise has students match descriptions with the correct term. Terms include “Allies,” “Brandenburg Gate,” and “Iron Curtain.”

The homework assignment asks students to read questions about the Berlin Wall and circle the correct answer out of a list of options. Students will use what they’ve learned during this lesson to complete this assignment.

This lesson plan includes answer keys for the activity worksheet, the practice worksheet, and the homework assignment. If you choose to administer the lesson pages to your students via PDF, you will need to save a new file that omits these pages. Otherwise, you can simply print out the applicable pages and keep these as reference for yourself when grading assignments.

At a time when we are struggling to become teachers in our own homes, this was a godsend. The lessons were clear and easy and even a non-tech savvy parent could deal with them.