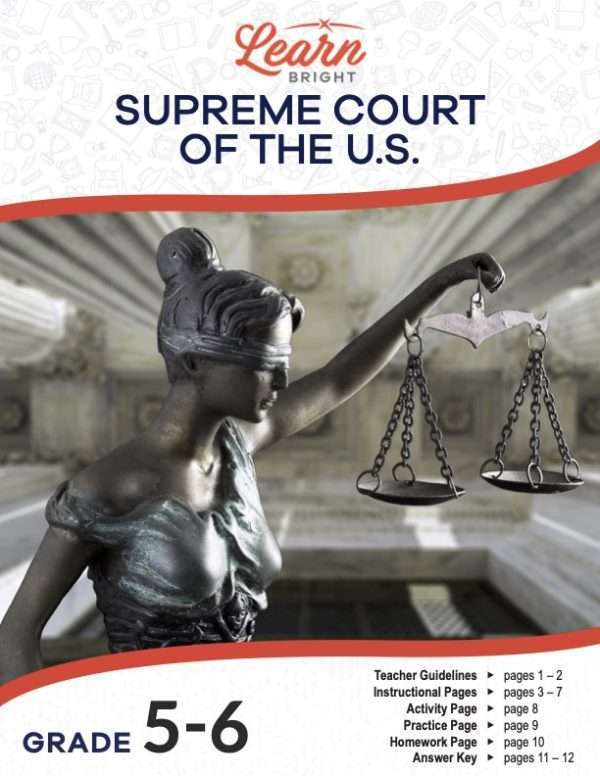 Supreme Court of the U.S.

Supreme Court of the U.S. introduces students to the highest court and head of the judicial branch of the United States government. Students will learn about notable historical figures, landmark decisions, and other facts about the Supreme Court. They will be able to explain the role of the court in the judicial branch and identify the roles of individual justices.

The “Options for Lesson” section contains a few alternatives for how to administer some of the material. For instance, you may want to have students work alone instead of in groups for the activity. Or, you could conduct a class debate for some of the cases. Feel free to get creative!

What our Supreme Court of the U.S. lesson plan includes

Lesson Objectives and Overview: Supreme Court of the U.S. teaches 5th and 6th grade students about this essential part of the nation’s government. Students will learn about the judicial branch and some historic landmark cases that shaped society. They will be able to identify and explain the roles of the Supreme Court justices by the end of the lesson.

There are five content pages in this lesson. It starts out describing what the judicial branch of the U.S. government is. The Supreme Court, which heads the branch, is the highest court in the nation. Students will learn some history about the court, such as the fact that the first decision occurred on August 3, 1791.

The lesson continues as it lists several notable Supreme Court Justices, including John Marshall, Earl Warren, and Thurgood Marshall. Thurgood Marshall, in 1967, became the first African-American justice on the Supreme Court. Students will also learn about what are called “landmark” cases. The lesson lists 13 in total. These decisions impact and influence the nation and society in general, not just those directly involved in the case.

You will divide students into groups for the activity portion. There are three cases on the worksheet that students will study. They will discuss the cases with their group and explain how they would decide the case. Each student will write their opinion for each case in the space provided.

For the practice worksheet, students will first match information to the person it describes. There is a total of 10 descriptions and people to match. Then, students will write a question that corresponds to a clue (e.g., Landmark, Judicial, Article 3). Last, they will describe the landmark decision they believe had the greatest impact on society. You may have students share these responses with the class.

The homework assignment requires students to match case names to the correct ruling. The worksheet lists all 13 landmark decisions. Afterward, they will mark six different statements as true (T) or false (F).

There are answer keys for both the practice and homework worksheets at the end of the lesson plan.