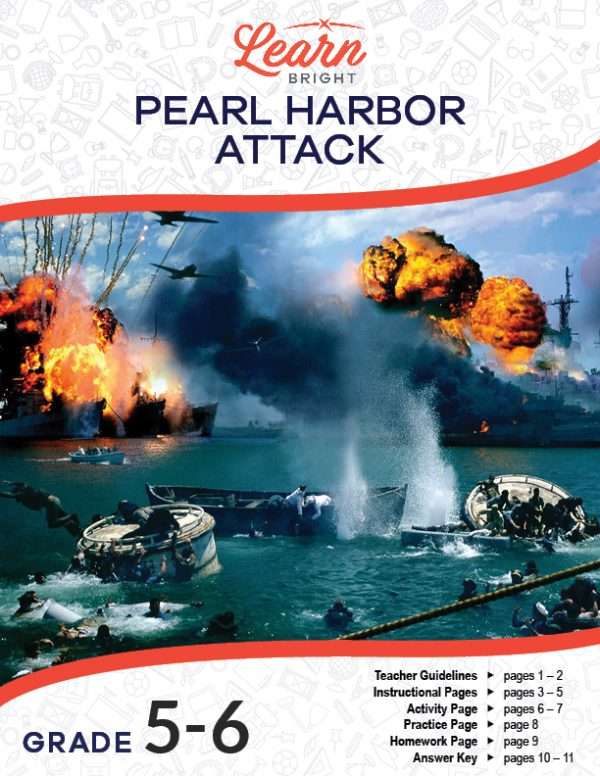 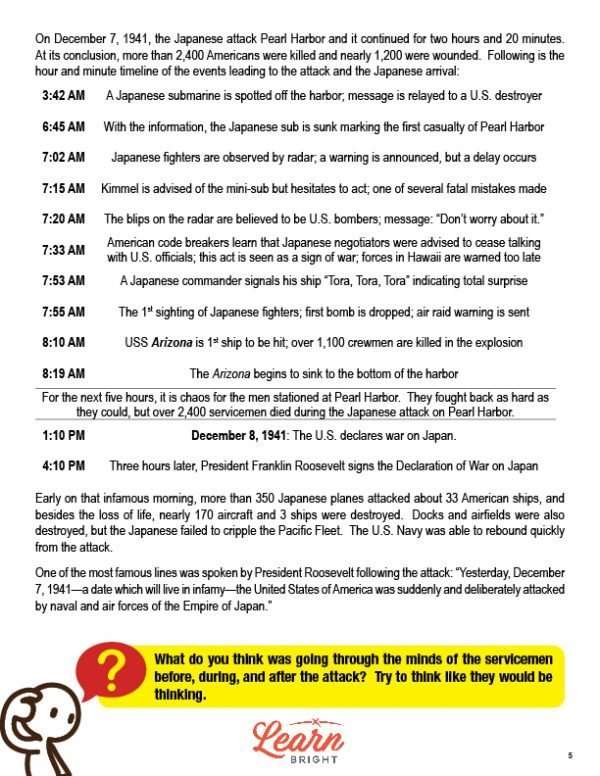 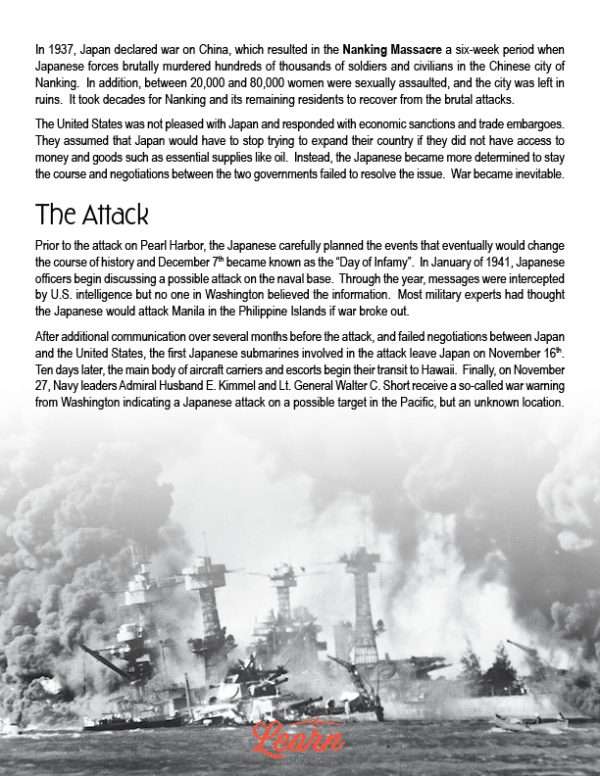 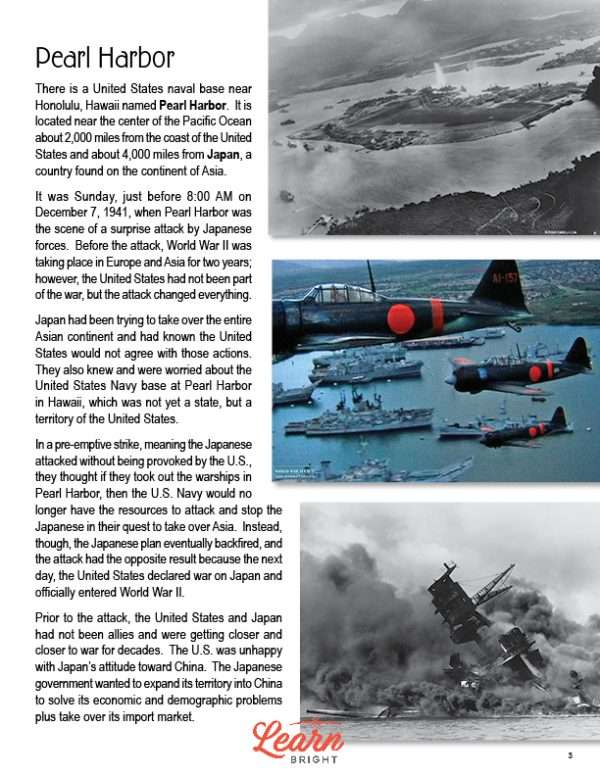 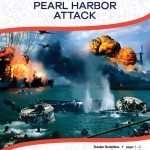 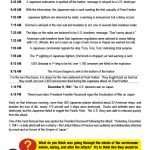 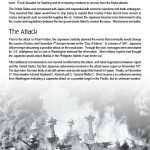 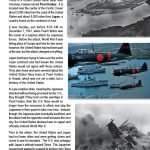 Our Pearl Harbor Attack lesson plan teaches students about the attack, including the historical context, the events of the attack, and the aftermath. Students also learn about the lasting legacy of the attack.

Our “Options for Lesson” section lists many optional additions or adjustments to the lesson plan. One of these additions is to have someone who was alive during the Pearl Harbor attack come speak to your class about what that experience was like. This is a great way to give your students an additional, more personal perspective on the attack.

Lesson Objectives and Overview: Pearl Harbor Attack introduces students to the events, figures, and key moments during the attack, as well as its implications related to World War II. Students will also learn background information on the conflict between the United States and Japan that led up to their involvement in World War II. This lesson is for students in 5th grade and 6th grade.

Every lesson plan provides you with a classroom procedure page that outlines a step-by-step guide to follow. You do not have to follow the guide exactly. The guide helps you organize the lesson and details when to hand out worksheets. It also lists information in the orange box that you might find useful. You will find the lesson objectives, state standards, and number of class sessions the lesson should take to complete in this area. In addition, it describes the supplies you will need as well as what and how you need to prepare beforehand. The only supplies you need for this lesson are the handouts. You can prepare ahead of time by pairing the students for the activity, locating a map for the lesson opening, and copying the handouts.

Included with this lesson is an “Options for Lesson” section that lists a number of suggestions for activities to add to the lesson or substitutions for the ones already in the lesson. One option you may want to use is to have students read the speech from the activity worksheet aloud, with each student reading one line at a time. Students can also rewrite the speech in their own words. Another optional addition is to invite a person who remembers the Pearl Harbor Attack to come speak to your class. Students can also build a model of Pearl Harbor before the attack. (If you decided to add that activity to your lesson, you would need to provide supplies for them to build the model with.)

You can find several other options for this lesson in the orange box on the Classroom Procedure page.

The teacher notes page includes a paragraph with additional guidelines and things to think about as you begin to plan your lesson. It notes that while many students might be familiar with the event, they likely do not know all of the details. It also suggests that you can pair this lesson with other lessons related to World War II. You can find some of these listed in the “Related Lesson Plans” section below. This page also includes lines that you can use to add your own notes as you’re preparing for this lesson.

This lesson plan includes three content pages. The first section of this lesson begins by providing students with context for the Pearl Harbor attack. Students will learn that Pearl Harbor is actually the name of a U.S. naval base in Hawaii, off the coast of the United States. It’s only about 4,000 miles from Japan! On December 7, 1941, Japan launched a surprise attack on the Pearl Harbor base. World War II had been happening, mostly in Europe and Asia, for two years, but the United States had not officially entered the war yet.

Students will learn that it was a preemptive strike by Japan, which means that it was not provoked, and that Japan was worried that the U.S. had a base so close to their country. Japan hoped that destroying the naval base would stop the United States from being able to stop them from taking over the entire continent of Asia, which they were trying to do.

They will then learn that the United States and Japan had already not been on good terms. The U.S. did not like that Japan was trying to expand its territory into China and take over its import market. Japan declared war on China in 1937, leading to the Nanking Massacre. This was a horrific six-week event in which Japanese forces murdered hundreds of thousands of Chinese people in the city of Nanking. The U.S. responded to this attack with sanctions and embargoes. However, these measures did not stop Japan in the way the U.S. had hoped it would.

The next section of this lesson delves into the details of the attack itself. Students will learn that the Japanese military had carefully planned the attack. They first discussed it almost a year before the attack actually took place. The United States actually intercepted messages throughout the year that indicated their plan, but no one took them seriously. The first Japanese submarines to actually leave Japan launched on November 16, and additional preparations continued from there. The attack itself lasted 2 hours and 20 minutes.

The final content page also lists out a minute-by-minute recounting of the events of the attack. It begins at 3:42 AM, when they spotted a Japanese submarine off the harbor. It continues, event by event, until 4:10 PM the next day, when President Franklin D. Roosevelt signed the Declaration of War on Japan. Students will learn that Japan used more than 350 planes in the attack, and that they killed more than 2,400 people, wounded almost 1,200 people, and destroyed 170 aircraft and 3 ships. However, the U.S. Navy was able to rebound from the attack quite quickly. People also call this attack the “Day of Infamy” because of a line from Franklin D. Roosevelt’s speech the day after the attack. He said that December 7, 1941 — the day of the attack — was “a date which will live in infamy.”

The Pearl Harbor Attack lesson plan includes three worksheets: an activity worksheet, a practice worksheet, and a homework assignment. You can refer to the guide on the classroom procedure page to determine when to hand out each worksheet.

For the activity worksheet, students work with a partner to read a speech given by Franklin D. Roosevelt on December 8, 1941, and answer questions related to it. These questions include “What do you believe is Roosevelt’s message to the citizens of the United States?”

After the answer the questions, the students will then take turns reading the speech aloud to their partner. Students can also work either alone or in groups for this activity.

The practice worksheet asks students to tell whether various statements are true or false. They must then identify the correct version of the false statements. They the answer questions about Pearl Harbor, like “About what time did the Pearl Harbor attack take place?” These questions test the students’ understanding of the lesson material.

Students will first place twelve events related to Pearl Harbor in chronological order. These events include “The United States declares war on Japan,” and “American code breakers learn that Japanese negotiators were advised to cease talking.” Next, they describe the significance of various numbers related to the Pearl Harbor attack.

This lesson plan includes answer keys for the practice worksheet and the homework assignment. No answer key is provided for the activity worksheet, as students’ answers to the questions will vary. If you choose to administer the lesson pages to your students via PDF, you will need to save a new file that omits these pages. Otherwise, you can simply print out the applicable pages and keep these as reference for yourself when grading assignments.

Got this to wrap up the year for my grandson. He loved it and was eager to research more about Perl Harbor. The only drawback was the final project was not as challenging as most of the packets. But easy to come up with an alternative.

This was a valuable aid to my history lesson.

I used these as part of my distance learning curriculum while our school has been shut down. Even though I teach high school students, I have many EL and Special Ed students that these resources were at a manageable level for them to do independently. It is great way to front load the material they will be reading from their text books which are written at a higher level.