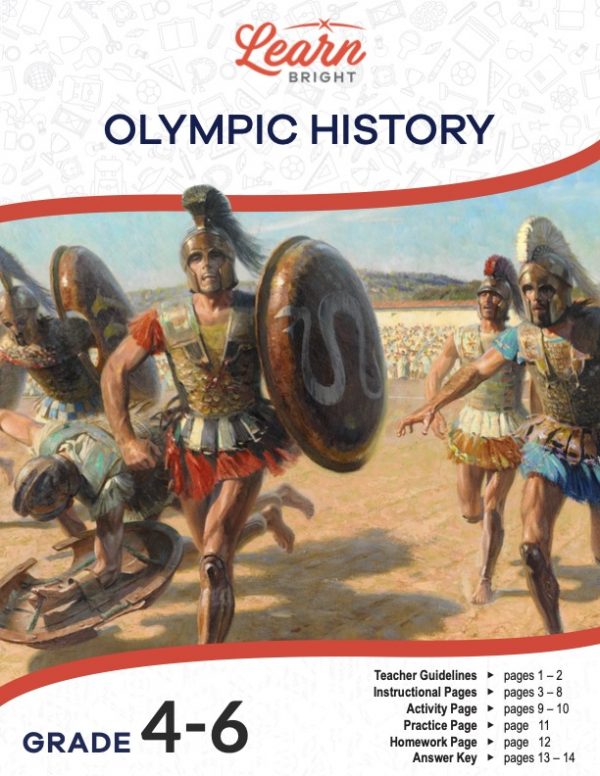 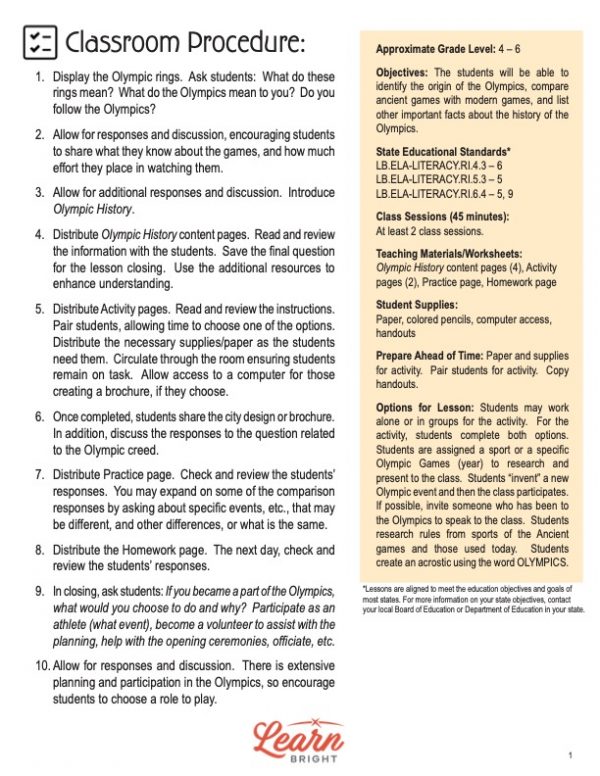 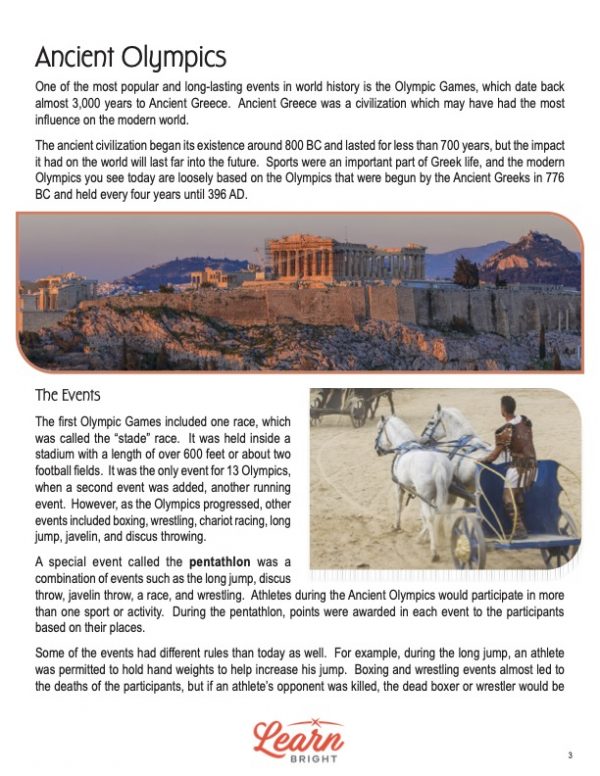 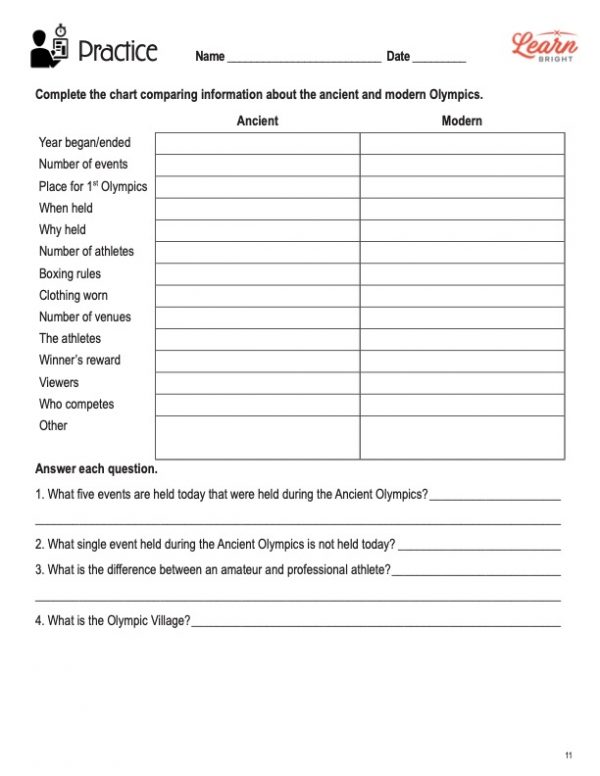 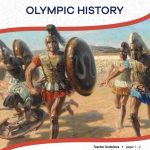 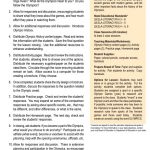 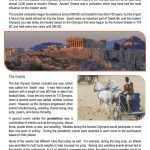 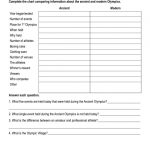 Our Olympic History lesson plan teaches students about the history of the Olympics, including its origins and the differences between the ancient games and the modern Olympics. Students will get to complete an activity in which they imagine the Olympics are coming to their city and design advertisements for them.

The “Options for Lesson” section describes numerous additions or changes you can make to the lesson. Some of these include inviting someone who has been to the Olympics to come speak to your class or having students research a specific year of the Olympic Games and present to the class.

Lesson Objectives and Overview: Olympic History introduces students to the history of the Olympics and its origins. Students will learn about the differences between the ancient games and the modern games. They will also be able to list important facts about the history of the games. This lesson is for students in the 4th grade, 5th grade, and 6th grade.

Every lesson plan provides you with a classroom procedure page that outlines a step-by-step guide to follow. You do not have to follow the guide exactly. The guide helps you organize the lesson and details when to hand out worksheets. It also lists information in the yellow box that you might find useful. You will find the lesson objectives, state standards, and number of class sessions the lesson should take to complete in this area. In addition, it describes the supplies you will need as well as what and how you need to prepare beforehand. For this lesson, the supplies you will need are paper, colored pencils, computer access, and the handouts. To prepare for this lesson ahead of time, you can gather the paper and other supplies needed for the activity, pair the students for the activity, and copy all of the handouts.

Included with this lesson is an “Options for Lesson” section that lists a number of suggestions for activities to add to the lesson or substitutions for the ones already in the lesson. One option is to have students complete both options for the activity rather than just one. You can assign students a specific sport or a specific year that the Olympic Games were held in and have them research it and present their findings to the class. Another option is to have students invent a whole new Olympic event and have their classmates participate in it. You can also try inviting someone who has been to the Olympics to speak to your class. Students can also do some research to compare and contrast the rules of various sports from the ancient games and the games we play today. Finally, you can have students create an acrostic poem using the letters of the word Olympics.

The teacher notes page includes a paragraph with additional guidelines and things to think about as you begin to plan your lesson. This paragraph notes that students may already be interested in learning about the Olympics, especially if they play a sport that is part of the modern Olympics. It also suggests teaching this lesson on years that the Olympics are held or in conjunction with a lesson on Ancient Greece or other countries of the world. This page also includes blank lines that you can use to add your own notes and thoughts as you prepare for this lesson.

The Olympic History lesson plan includes six content pages. The first section of this lesson is about the ancient Olympics. Students will learn that the Olympics began almost 3,000 years ago in Ancient Greece. The first Olympic games included one race called the “stade” race, held inside of a stadium on a track that was over 600 feet long. This was the only event for the first 13 Olympic games! They added more and more events over time, including boxing, javelin, and discus throwing. The pentathlon was a special event that combined five events, such as a race and the long jump. Athletes often participated in multiple sports or activities. Judges awarded points for each event of the pentathlon to the participants according to how they placed.

The Greeks held the early Olympics in the same place every single year—Olympia. The Greek gods played an important role in ancient Greek culture. The people of Greece held the Olympic games in honor of Zeus, a Greek god who they believed lived on Mount Olympus in Olympia. They lasted just one day until they added more events, making it a five-day festival with three days of games. The stadium could seat around 50,000 spectators, but other people who could not fit would pitch a tent outside the area.

The main purpose of these games is not clear. Several legends contribute to its origins. Hercules, a Greek god, won a race in Olympia and declared that the race should be held every four years. In another legend, Zeus defeated the Greek god, Cronus, and started a festival in celebration. Most likely, however, the ancient Greeks started the games to stop a war in honor of the gods. The games ended in approximately 396 AD after the Roman emperor Theodosius I declared the games to be a savage celebration.

The next section of the lesson discusses the modern Olympics, which began in 1896, exactly 1,500 years after the end of the ancient games. A French nobleman named Pierre Fredy is responsible for bringing the Olympic games back. He believed sports could encourage peace throughout the world and bring people together. In 1894, representatives from many countries convened in Paris to plan for the first modern Olympic games.

Events in the first modern Olympic games included 43 events, such as track and field, shot put, cycling, gymnastics, and weightlifting. In 1992, they split the games into the winter and summer Olympics, with the games alternating every two years instead of every four years. Summer games include softball, sailing, table tennis, rugby, judo, and cycling. Winter games include bobsleigh, curling, snowboarding, speed skating, and ice hockey.

The Athletes and the Place

The final sections of this lesson discuss the athletes, the places, and the purpose of the modern Olympics in more detail. The first Olympics in 1896 had 241 athletes from 14 countries, much fewer than the number of Olympians who participate today. For example, the 2016 summer Olympics hosted almost 11,000 athletes who represented 205 countries. Previously, the athletes had to be amateurs, meaning that they couldn’t get paid to play their sport. Many professional athletes who participate today take time off for the games to compete against others throughout the world. And for some athletes, being an Olympian is their career.

The first modern Olympics happened in Athens, Greece, but later games were held in different countries every four years. After the games split into summer and winter events, a total of 23 different cities and countries around the world have hosted the games. The International Olympic Committee (IOC), chooses the locations for the Olympics for every two years. The United States have hosted game eight times, the first in 1904 and most recently in 2002. Hosting the Olympic games is a huge responsibility, both financially and otherwise. Some cities have to build a village for athletes to live in during the duration of the games.

Students will discover that the primary purpose of the Olympic games is not to win, but to take part. The lesson provides the Olympic Creed that describes this purpose. Pierre de Coubertin created the emblem of the five rings in 1913 to symbolize the five continents of the world—Europe, Africa, Asia, Australia, and America. (North and South Americas were combined, and Antarctica was not included.) Students will also learn that these games have expanded their influence to create the Paralympics, Special Olympics, and Deaf Olympics for people with physical disabilities.

The Olympic History lesson plan includes three worksheets: an activity, a practice worksheet, and å homework assignment. The worksheets will help reinforce students’ grasp of the material. The guidelines on the classroom procedure page outline when to hand out each worksheet to the students.

Students will work with a partner to complete one of two activities. They will either plan an Olympic City or create a brochure to encourage people to come to the Olympics.

For the first option, students will design a city that can host a future summer Olympics event. They will need to consider and think about a number of things as they work, such as a place where 10,000 athletes can live, venues for the events, and security. Students will then create the final design, using labels where necessary. Once they complete their drawing, they can display it and explain it to the class.

For the second option, students should include things like the location of the Olympics, some reasons people should attend in person, and interesting facts to help encourage attendance. The worksheet outlines the design parameters and explains that students can either draw and write by hand or use a computer program to create the brochure.

Both options require students to read the Olympic Creed and write what it means to them and how it can be helpful in their everyday lives. Students can also work independently or in a group for these activities. You can also have students complete both options for this activity instead of just one.

The practice worksheet has two sections. The first section asks students to complete a chart that compares information about the ancient and modern Olympic games. Categories include the start and end years, number of events, place for first Olympics, number of athletes, boxing rules, clothing worn, winner’s reward, and much more. For the second section, students will answer four questions based on the information from the lesson.

This lesson plan includes answer keys for the practice worksheet and the homework assignment. The answers for both worksheets are in red. The homework answer key explains that the final task for students will vary. However, ensure students’ drawings are symbolic of the purpose of the Olympics. If you choose to administer the lesson pages to your students via PDF, you will need to save a new file that omits these pages. Otherwise, you can simply print out the applicable pages and keep these as reference for yourself when grading assignments. 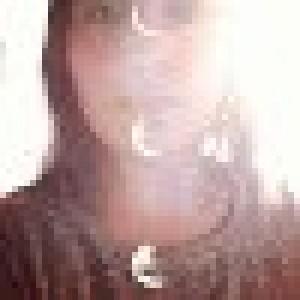 It has been a greqt help durinf the preparation of my lessons. So clear and easy to follow. Than you so much!

I appreciate the what you do to further education worldwide. Thank you

This is an amazing piece of work! I used it in my virtual Physical Education class and had a great response! Thank you for a very well put together lesson!

Absolutely fantastic - thank you. We are studying the Ancient Greeks and this really helped -thank you!!

It was an excellent lesson. The photos and activities were great!