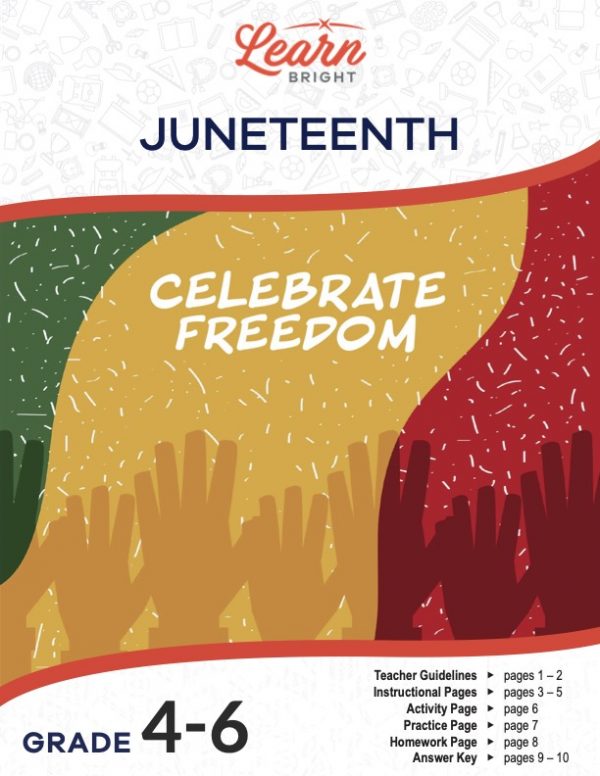 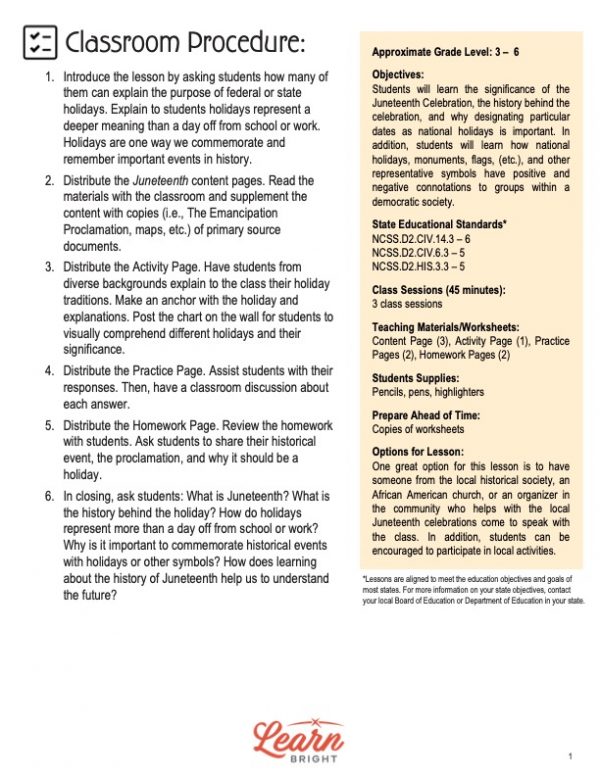 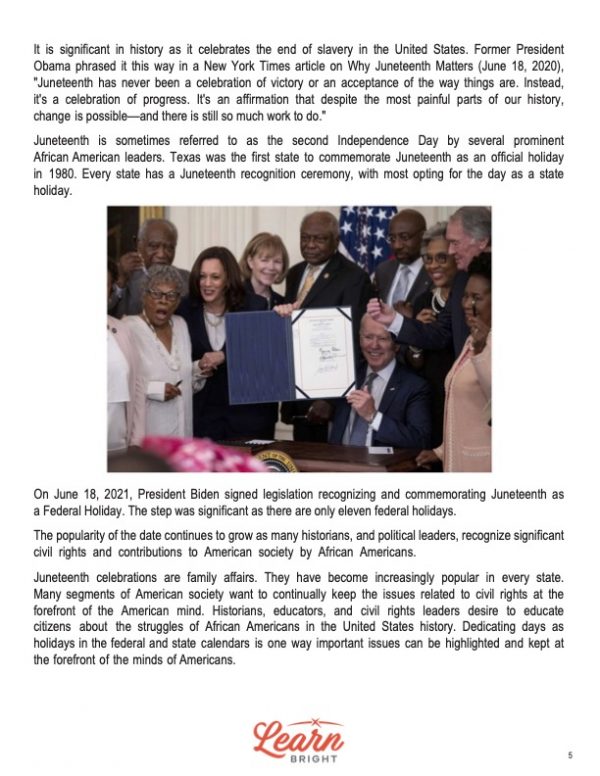 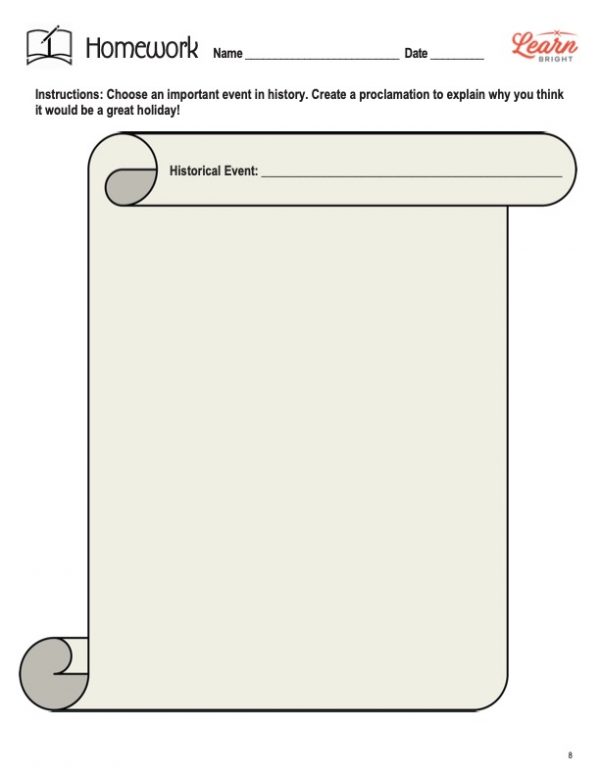 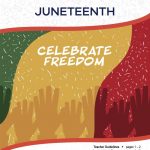 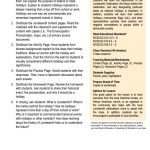 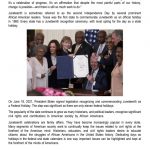 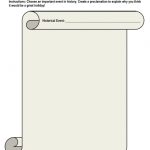 Juneteenth introduces students to the historical events that led to this significant holiday. Students will discover facts about the Civil War and slavery. They will learn about the Emancipation Proclamation and how President Lincoln freed the slaves during this time.

This lesson provides an excellent opportunity to explain to students some history of the Civil War and to bring awareness about a very important topic today. The “Options for Lesson” section suggests inviting someone, such as a member of an African American church, to come speak to the class and answer questions about this subject.

What our Juneteenth lesson plan includes

Lesson Objectives and Overview: Juneteenth teaches students about the history behind this holiday. Students will learn why we celebrate Juneteenth on June 19 every year. They will discover why designating specific dates as national holidays is important. They will also learn how certain national holidays, monuments, and other symbols have both positive and negative connotations. This lesson is for students in 3rd grade, 4th grade, 5th grade, and 6th grade.

Every lesson plan provides you with a classroom procedure page that outlines a step-by-step guide to follow. You do not have to follow the guide exactly. The guide helps you organize the lesson and details when to hand out worksheets. It also lists information in the yellow box that you might find useful. You will find the lesson objectives, state standards, and number of class sessions the lesson should take to complete in this area. In addition, it describes the supplies you will need as well as what and how you need to prepare beforehand. For this lesson, you will simply need to provide pens or pencils or other writing utensils for the activity.

The “Options for Lesson” section of the classroom procedure page provides some suggestions that you may want to incorporate into the lesson if you have time or want to extend it. One suggestion is to invite someone to speak to the class about the holiday. This could be a person from the local historical society, a member of an African American church, or someone in the community who helps organize local Juneteenth celebrations. You may think of someone else who could provide similar expertise and information to students about the subject. Another option is to encourage students to participate in local activities, especially those that relate to Juneteenth and the celebration of freedom from slavery.

The teacher notes page provides an extra paragraph of information to help guide the lesson. This paragraph explains some of the key content that you will teach students as you deliver the lesson. You can use the blank lines to write down any other ideas or thoughts you have about the topic as you prepare.

A Trip Back in Time

The Juneteenth lesson plan has three pages of content. The first page provides valuable history on slavery, specifically in the state of Texas. In 1845, the United States annexed Texas and made it the 28th state of the Union. People argued about the border between Texas and the rest of the states and often fought with each other.

Most of the state’s 269,999 square miles were wide open and uninhabited. There were only a few roads, towns, and rail lines. The Census Bureau counted only 212,000 people living in Texas in 1850. Only 10 years later, however, that number rose to 604,000 people. Sadly, more than 180,000 of those people were slaves, which was about one-third of the state’s population.

Students will discover that people traveled by foot or on horseback, and mostly along cattle trails through the rough terrain. The weather was unpredictable, and people often feared attacks by bandits or Native American tribes. Even though the telegraph was invented in 1844, there were only a few telegraph lines along the railways by 1860. Communication between cities relied on private mail carriers, such as the Pony Express, to deliver news. As a result, it often took nearly six months for information to arrive in the state.

Because of how difficult communication was at this time, Congress authorized the purchase of camels to carry mail from Texas to California. However, the animals proved less efficient than other methods. Even worse, Texas seceded from the Union to join the Confederate states in the Civil War. The state closed off several of the routes that ran through it. By the time the Civil War began in 1861, the Pony Express had ceased operations, and mail and information slowed from a trickle to almost nothing.

A couple years later, in January of 1863, President Lincoln signed the Emancipation Proclamation. Whether or not the Union would be victorious in the war was still uncertain. However, Lincoln hoped that issuing the proclamation would pressure the Confederate states to end the war. He may also have thought slaves would revolt against their owners, possibly ending the fight even faster. Until September of 1862, Lincoln stated that the main focus of the war was to preserve the Union.

However, that focus changed after signing the Emancipation Proclamation. The Union’s new primary mission focused on freeing slaves. If the Union won the war, they would accomplish that mission. As the war progressed, it seemed more and more inevitable that the Union would indeed win the fight. Word of Lincoln’s proclamation would take many months to spread to all parts of the South because communication in the 1860s was so minimal. Furthermore, slave owners had no reason to assist Lincoln in spreading the word because they didn’t want to free their slaves.

Western states were the last to receive word of the war’s end in 1865, nearly two years after Lincoln signed the Emancipation Proclamation. That meant that two years passed before many enslaved African Americans were aware of the document’s existence and that the war was over. On June 19, 1865, Gordon Granger, a Union general, arrived in Galveston, Texas, to announce the end of the war and to read the document. That day, around 250,000 slaves in Texas became free. We now commemorate this day as Juneteenth.

The holiday celebrates the end of slavery and the beginning of freedom for so many slaves in America. The lesson provides a quote from former President Obama in a New York Times article about why this holiday is so important. He explained that despite some of the painful parts of the country’s history, change is still possible.

Many prominent African American leaders refer to Juneteenth as a second Independence Day. Texas was the first state to commemorate the holiday as an official holiday in 1980. Every state has a recognition ceremony, and most of the states opt for it to be a state holiday. On June 18, 2021, President Biden signed legislation that recognized Juneteenth as a federal holiday. Celebration of this special day continues to grow in popularity as historians and political leaders recognize significant civil rights and other contributions to American society by African Americans.

Juneteenth celebrations are often family affairs. They have become increasingly popular in every state. Some segments of American society want to keep issues related to civil rights at the forefront of the American mind. Historians, educators, and civil rights leaders want to educate as many citizens as possible about the struggles of African Americans in United States history. Dedicating days as holidays in both federal and state calendars is one way to highlight important issues and keep them on the forefront of our minds.

The Juneteenth lesson plan includes three worksheets: an activity worksheet, a practice worksheet, and a homework assignment. Each one will help solidify students’ grasp and understanding of the lesson material. Use the guide on the classroom procedure page to determine when to hand out each worksheet to the students.

For the activity, students will list the holidays they and their families celebrate in the first column on the chart. Next to each holiday, they will explain why that holiday is important to them and what it says about their religion, beliefs, ethnic background, and heritage. After students complete the activity, they can discuss the different holidays and their personal significance together as a class.

The practice worksheet requires students to answer five questions related to the lesson content. Students will need to use their critical thinking skills as these questions require them to understand the significance and important of the Juneteenth holiday. They may need to refer to the content pages to complete this worksheet.

For the homework assignment, students will research various important events in history. They will choose one and create a proclamation that describes why that event should be celebrated as a holiday. The worksheet shows a picture of a scroll on which students will write their proclamations. They can use scratch paper for rough drafts and the worksheet to write their final drafts.

The last two pages of the document are answer keys for the practice and homework worksheets. The homework answer key does not actually provide a sample proclamation. You may write one yourself to share with the class as an example that they can refer to as they begin the assignment. The answer key for the practice worksheet provides thorough answers for the five questions. Students’ responses may vary a little, but they should be fairly close to those on the answer key. If you choose to administer the lesson pages to your students via PDF, you will need to save a new file that omits these pages. Otherwise, you can simply print out the applicable pages and keep these as reference for yourself when grading assignments.