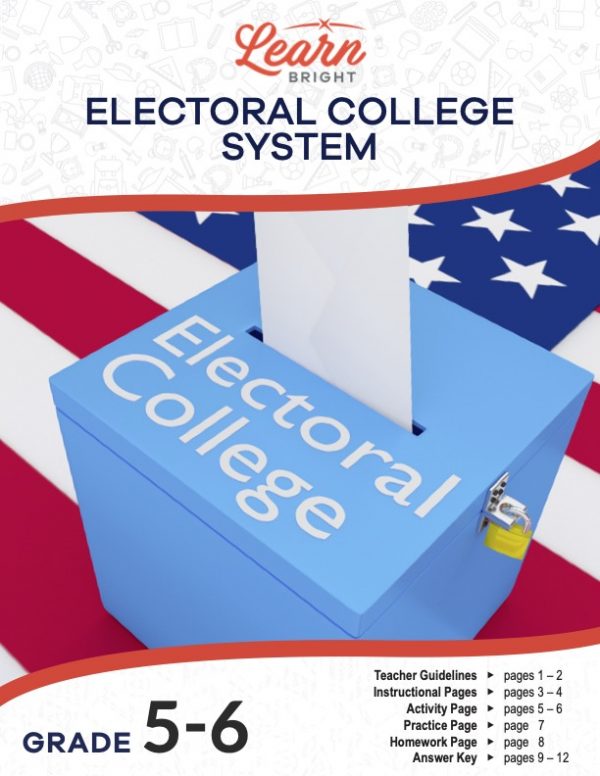 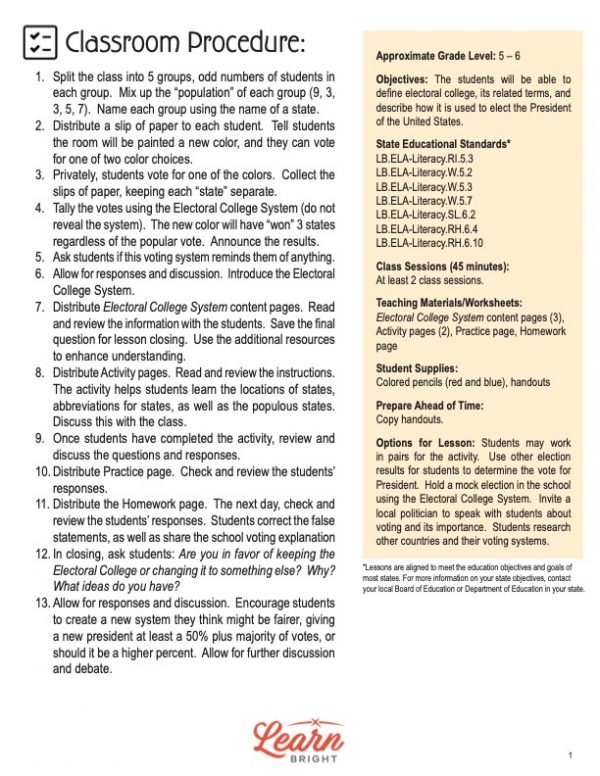 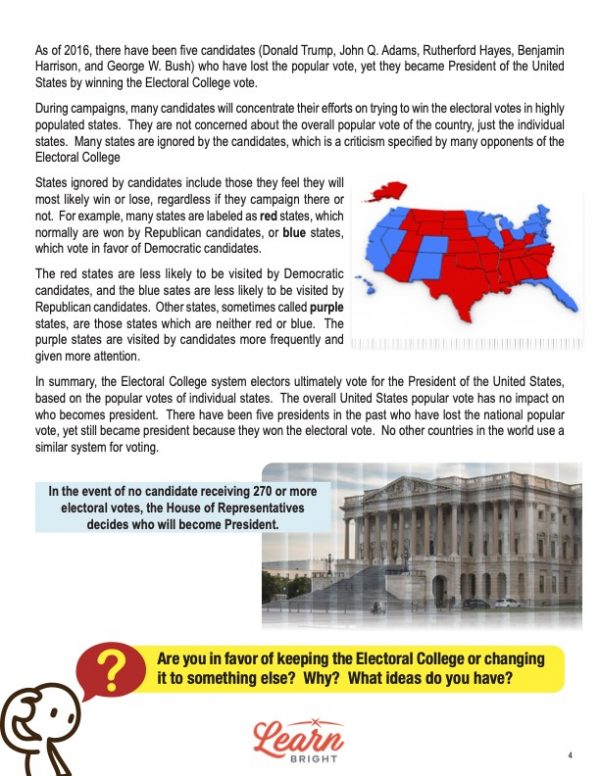 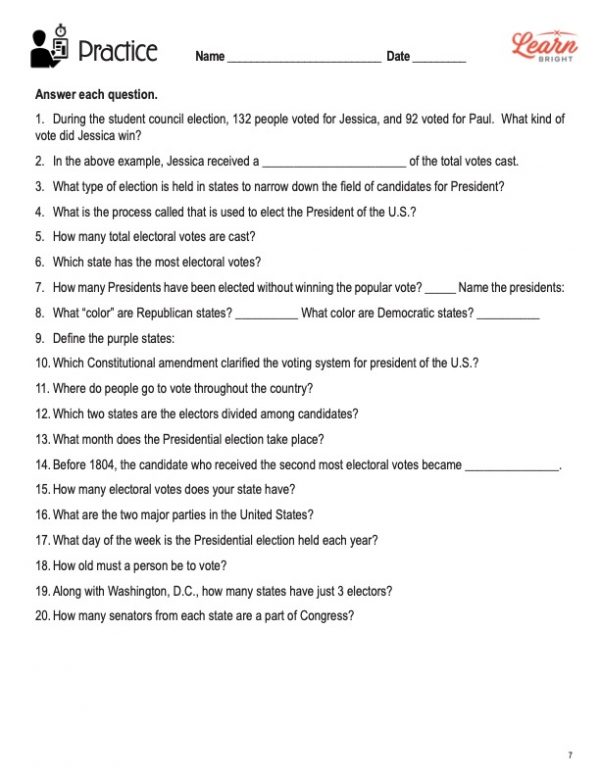 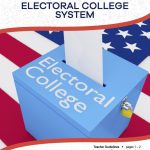 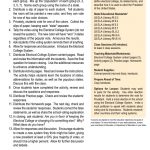 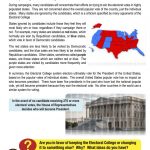 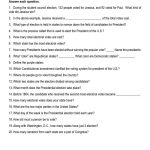 Our Electoral College System lesson plan teaches students about the process used to elect the president of the United States. Students will learn how this system originally came into place. They will also discover that the United States is the only country in the world that uses this system.

There are some suggestions listed in the “Options for Lesson” section for additional activities or adjustments to the lesson. One of these optional additions is to invite a local politician to come speak to your class about the importance of voting.

Every lesson plan provides you with a classroom procedure page that outlines a step-by-step guide to follow. You do not have to follow the guide exactly. The guide helps you organize the lesson and details when to hand out worksheets. It also lists information in the orange box that you might find useful. You will find the lesson objectives, state standards, and number of class sessions the lesson should take to complete in this area. In addition, it describes the supplies you will need as well as what and how you need to prepare beforehand. The supplies you will need for this lesson are red and blue colored pencils and the handouts. To prepare for this lesson ahead of time, you can gather the colored pencils and copy the handouts.

Included with this lesson is an “Options for Lesson” section that lists a number of suggestions for activities to add to the lesson or substitutions for the ones already in it. One optional addition to this lesson would be to hold a mock election in your school using the electoral college system. Another idea is to invite a local politician to come to your class and talk about how important voting is. Finally, you could have students research how voting systems in other countries work.

The teacher notes page includes a paragraph with additional guidelines and things to think about as you begin to plan your lesson. It notes that some students might be aware that we don’t elect the president using the popular vote. However, they may not fully understand how the process does work. This page also includes lines that you can use to add your own notes as you prepare for this lesson.

The Electoral College System lesson plan includes two pages of content. It begins by explaining some of the basic terms and processes related to the Electoral College system. Students will learn that, in the United States, we hold a presidential election once every four years. Either a new president enters the office, or the old president stays for another term. Presidents can serve no more than two terms, whether consecutively or not.

The people who run for president start campaigning a year or more in advance of the election. Sometimes, there are only a few candidates who want to become president. Other times, a lot of people campaign against each other for the office. Most candidates are members of either the Republican or Democratic parties, but there are other political parties as well. However, it is rare for members of other parties to take many votes away from the two main parties.

Students will learn that each state holds a primary election to shrink the field of candidates. After the primaries, the general election for the president takes place every four years in early November. On election day, millions of Americans vote for the person they want to be president. Only people 18 years of age or over can vote. It is possible that a candidate can receive more votes than the other candidate and still lose the election! Winning the popular vote does not necessarily mean that the person wins the election because of the way the Electoral College system works.

A College that Is Not a School

The founders of the United States created this system when they wrote the Constitution in 1787. They did this because they did not trust the average people of the country to vote directly for a candidate. They thought that the people would not be well-informed enough to make such a decision. In addition, they believed people would simply vote for an individual from their own state.

At this time, the candidate who received the second most votes automatically became vice president. Today, however, presidential candidates choose their own VPs. Because of this change, the 12th Amendment clarified the process of the Electoral College. It provided that the electors could vote once for president and once for vice president. Students will learn that a candidate has to receive 270 electoral votes to win the presidency out of a total of 538.

Candidates aim to “win states” with large numbers of electoral votes. For example, California has 55 votes! Texas has 38, Florida has 29, and other large states have many votes as well. In the event that no candidate receives 270 or more electoral votes, the decision for who will become president lies with the House of Representatives.

Critics of the Electoral College

Throughout history, there have been five candidates who lost the popular vote but became president anyway because of the Electoral College system. These people are Donald Trump, John Q. Adams, Rutherford B. Hayes, Benjamin Harrison, and George W. Bush. Some people are critical of this system. It encourages candidates to ignore smaller states with fewer votes or states that they are already likely to win or lose. Instead, they concentrate their efforts on the states with the most electoral votes.

In other words, because the popular vote does not determine the president, presidential candidates do not concern themselves with the overall popular vote. They focus on the individual states. They ignore many states because they know they will either win or lose them regardless of their efforts. We call these states red states and blue states.

A red state is a state that a Republican will normally win. A blue state is a state that a Democrat will normally win. Democrats might spend more time in red states and Republicans in blue. However, a candidate for one of these parties could likely ignore whether states are red or blue and just focus on the most populous states or on purple states. Purple states are also called swing states because the electoral vote could swing in either direction.

The Electoral College System lesson plan includes three worksheets: an activity worksheet, a practice worksheet, and a homework assignment. Each one will help reinforce students’ grasp of the lesson content and help them demonstrate their comprehension. The guide on the classroom procedure page outlines when to hand out each worksheet to your students.

For the activity, students will write the number of electors for each state next to each state on a map. They will then follow the directions to color certain states in with different colors. Next, they will add up the number of electoral votes for each color and answer a few additional questions about state electors and electoral votes. Students may also work in pairs for this activity, rather than alone, if you prefer.

The practice worksheet requires students to read and answer 20 questions about the Electoral College. You may or may not allow them to use the content pages for reference. If you choose not to allow it, this worksheet could act as a quiz to test their memory and comprehension.

The homework assignment for this lesson contains three sections. The first section requires students to read various statements and determine whether they are true (T) or false (F). The second section asks them to correctly number the steps of the Electoral College process. For the final section, students must imagine how the Electoral College system would work to elect the president of their school.

This lesson plan includes answer keys for the activity worksheet, the practice worksheet, and the homework assignment. The correct answers for each worksheet are in red to make it easy to compare them to students’ responses. There should only be variation on the final prompt of the homework assignment. All other responses should reflect those on the answer keys. If you choose to administer the lesson pages to your students via PDF, you will need to save a new file that omits these pages. Otherwise, you can simply print out the applicable pages and keep these as reference for yourself when grading assignments.

Did a great job helping me explain it to my kids!

This was a great packet to use for online learning due to Covid-19. It help reinforce my unit on the Constitution and our government.

This is my first year teaching social studies. I searched many places for grade appropriate and fun activities. Clarendon Learning was the perfect place and made getting the activities easy. My kids also enjoyed the activity and were very engaged.