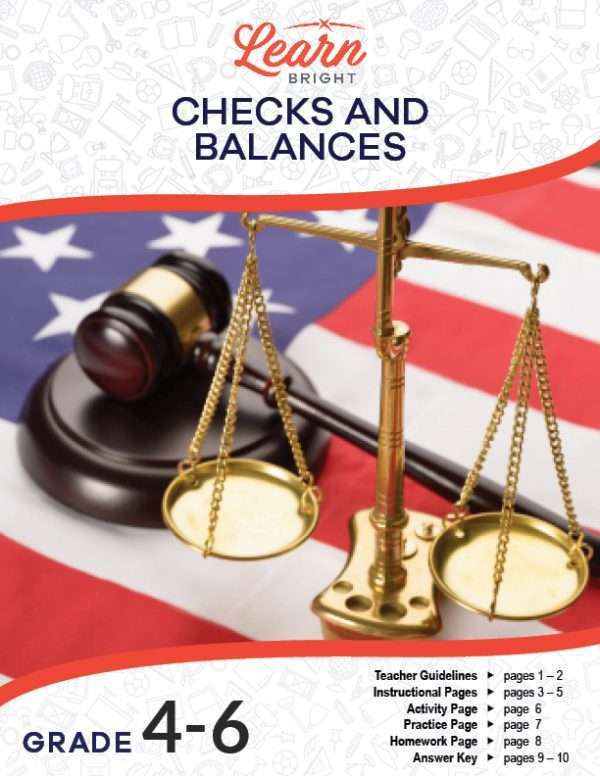 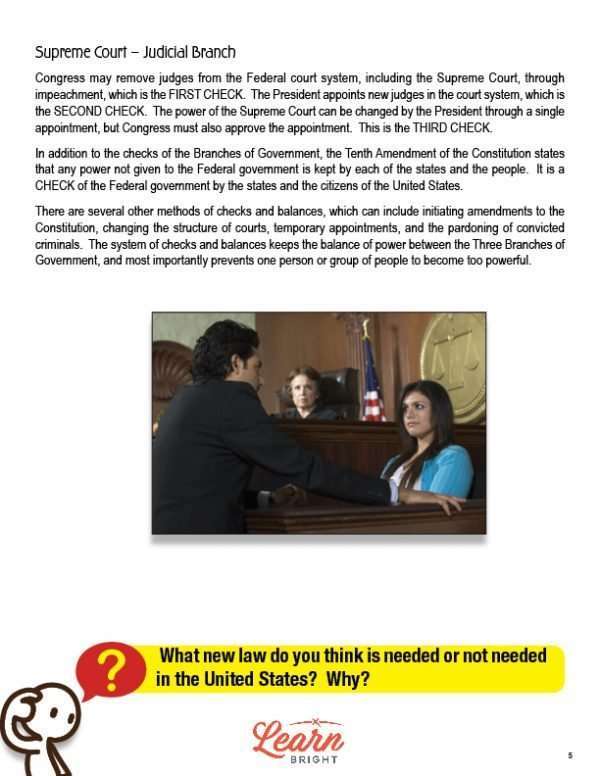 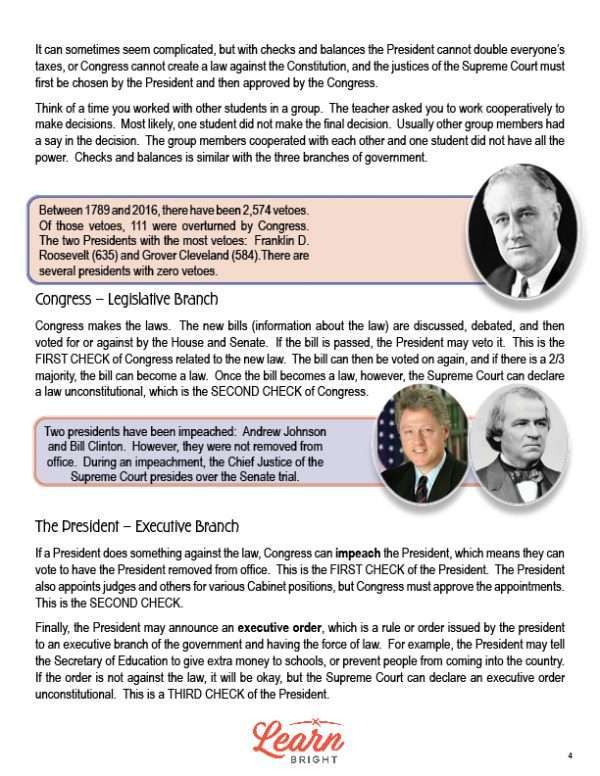 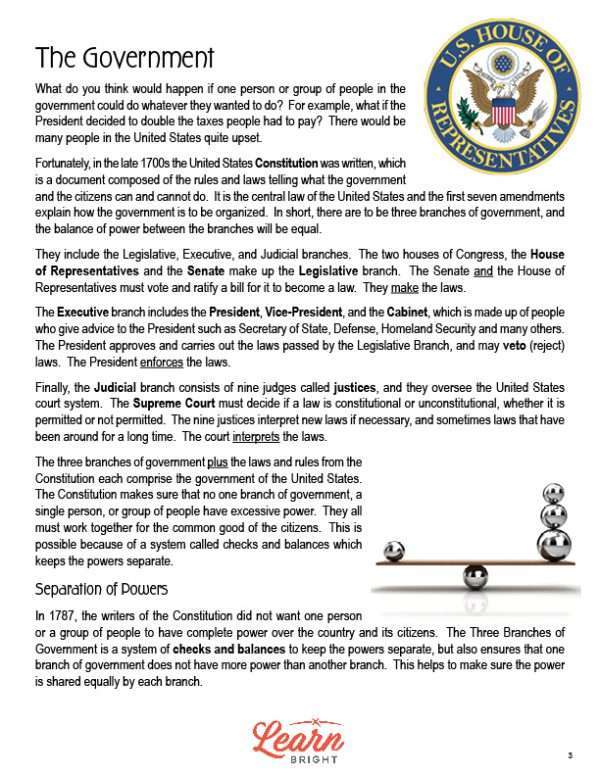 Included with this lesson are some adjustments or additions that you can make if you’d like, found in the “Options for Lesson” section of the Classroom Procedure page. One of the optional additions to this lesson is to invite a local, state, or federal representative to speak with your class about checks and balances.

What our Checks and Balances lesson plan includes

Every lesson plan provides you with a classroom procedure page that outlines a step-by-step guide to follow. You do not have to follow the guide exactly. The guide helps you organize the lesson and details when to hand out worksheets. It also lists information in the orange box that you might find useful. You will find the lesson objectives, state standards, and number of class sessions the lesson should take to complete in this area. In addition, it describes the supplies you will need as well as what and how you need to prepare beforehand. The only supplies needed for this lesson are the handouts. To prepare for this lesson ahead of time, you can create odd-numbered groups for the activity and copy the handouts.

Included with this lesson is an “Options for Lesson” section that lists a number of suggestions for activities to add to the lesson or substitutions for the ones already in the lesson. One optional addition to the lesson activity is to add more vetoed bills or questions for discussion. You can also invite a local, state, or federal representative to speak with your class about checks and balances. Additionally, you could discuss how checks and balances work in your town or city. Another optional addition is to assign each of your students one of the presidents and have them research their vetoes. Finally, you could have students research other countries’ governments and how checks and balances work there, if they exist.

The teacher notes page includes a paragraph with additional guidelines and things to think about as you begin to plan your lesson. It notes that while most students are likely aware of the three branches of government, they may not know how they interact. This page also includes lines that you can use to add your own notes as you’re preparing for this lesson.

The Checks and Balances lesson plan includes three pages of content. The lesson begins by asking students what they think would happen if one person or a group of people in the government could do whatever they wanted. If the President had that power, they could decide to double taxes, for example. Many people in the country would be very angry.

This can’t happen because people wrote the United States Constitution in the 1700s. The Constitution is a document that outlines the rules and laws that dictate what the government and people of the U.S. can and cannot do. Its first seven amendments explain how we have to organize the government. There are three branches of government, and the three of them must have an equal balance of power.

The three branches are the Legislative, Executive, and Judicial. The Legislative branch includes the two houses of Congress, the House of Representatives and the Senate. Both of these houses must vote and ratify a bill for it to become law. They make laws.

The Executive branch includes the President, the Vice President, and the Cabinet. The Cabinet includes people who advise the President, like the Secretaries of State, Defense, and Homeland Security. The President approves and enforces laws from the Legislative branch. They can also veto, or reject, laws.

The Judicial branch includes nine judges called justices, who make up the Supreme Court. They decide the constitutionality of laws. They interpret both new and established laws as necessary.

These three branches, along with the Constitution and its laws and rules, comprise the government of the United States. The Constitution ensures that none of the branches have too much power. All of them must work together for the common good. This relies on a particular system that we call checks and balances. It keeps the powers separate.

Next, students will learn that the writers of the Constitution in 1787 wanted to make sure that no one person or group of people had absolute power. The system of check and balances, with the three branches of government, keeps the powers separate and ensure that each branch has the same amount of power. This means that they share power equally. This ensures that the President can’t double taxes or Congress can’t create a law that contradicts the Constitution.

The lesson includes an example that students can relate to, asking students to think of a time they had to complete a group project. The whole group made decisions about the project instead of one person making all of the decisions. They cooperated with each other. Checks and balances operates in a similar way.

From 1789 to 2016, Presidents vetoed something 2,574 times. Congress overturned 111 of these vetoes. Franklin D. Roosevelt vetoed the most things (653), and Grover Cleveland vetoed the second most (584). Several President have zero vetoes.

Congress creates laws. The House and Senate then discuss, debate, and vote on the new bills. If it passes, the President can veto it. The veto is the first check of Congress. Next, they can vote on the bill again. If 2/3 of Congress votes for it, the bill can become law. Once it’s law, the Supreme Court can still rule it unconstitutional. This is the second check of Congress.

They’ve impeached two Presidents: Andrew Johnson and Bill Clinton. Neither of them were removed from office. The Chief Justice of the Supreme Court presided over the Senate trial during both impeachments.

The Tenth Amendment to the Constitution declares that any power not given to the government belongs to the people. This acts as a check of the federal government by the people of the U.S.

Other methods for checks and balances exist, like initiating amendments to the Constitution, changing the court structure, temporary appointments, and pardoning convicted criminals. This entire system helps keep the balance of power and prevents one person or group from having too much power.

The Checks and Balances lesson plan includes three worksheets: an activity worksheet, a practice worksheet, and a homework assignment. You can refer to the guide on the classroom procedure page to determine when to hand out each worksheet.

Students will work in groups to complete this activity. First, they will discuss two Congressional bills that past Presidents vetoed. Each student will explain why they agree or disagree with the veto, briefly writing out their responses. Next, the group will vote on whether the bill should pass. The two bills are the Freedom of Information Act and Universal Child Care.

Next, the groups will discuss several questions related to checks and balances and vetoes. Each student will write down their thoughts. Each group will share some of the things they discussed with the rest of the class.

Students may work either alone or in pairs for this activity if you’d prefer.

The homework assignment asks students to read ten questions and circle the correct answer. This tests their knowledge and understanding of the lesson material.

This lesson plan includes answer keys for the practice worksheet and the homework assignment. No answer key is provided for the activity worksheet as students’ answers will vary. If you choose to administer the lesson pages to your students via PDF, you will need to save a new file that omits these pages. Otherwise, you can simply print out the applicable pages and keep these as reference for yourself when grading assignments.

Haven't used it yet.However, after reviewing the lesson I am excited to present it to my students right around the time that we are learning about the election.

I have not used the materials, but they will cover the contents that I want to teach.