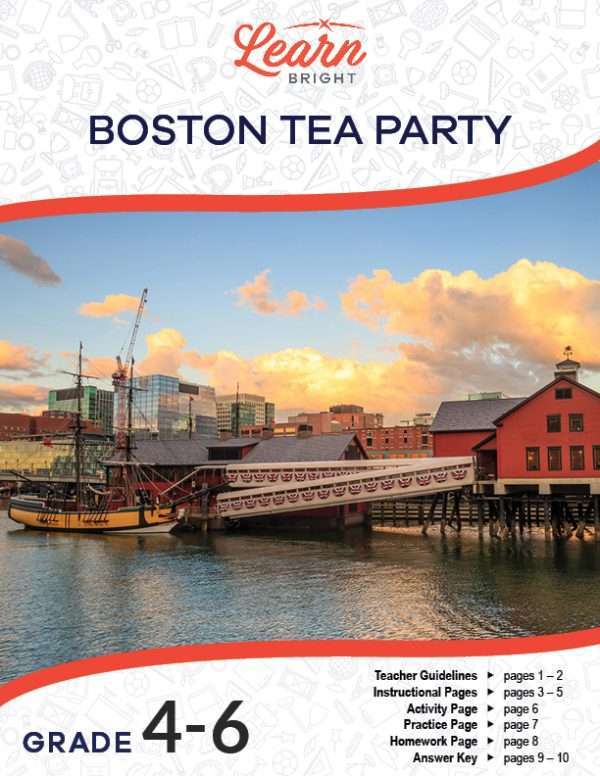 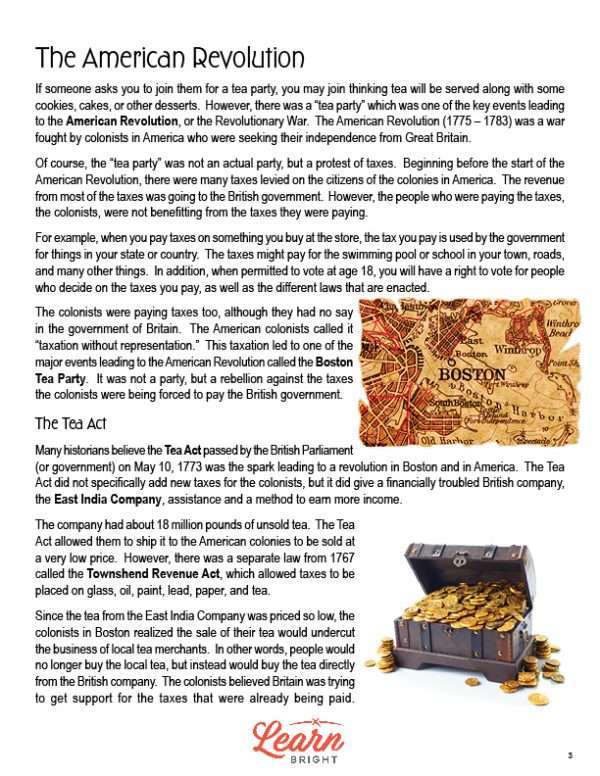 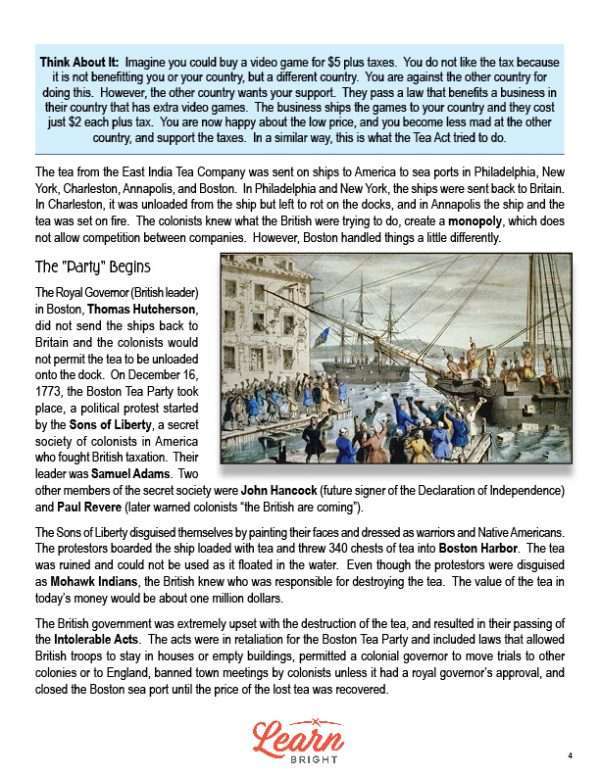 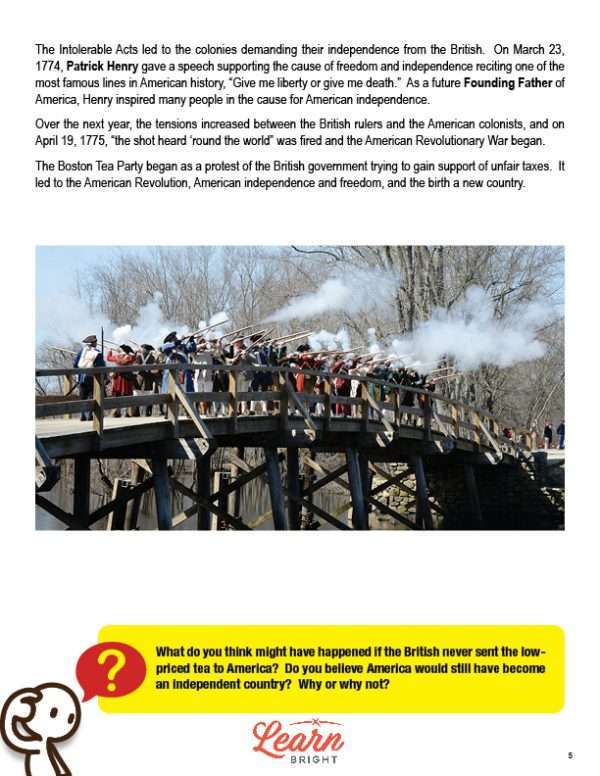 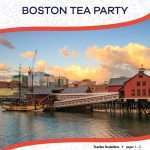 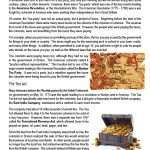 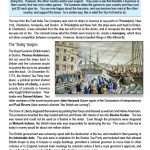 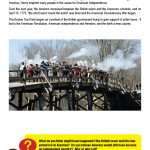 Included with this lesson are some optional additions or adjustments that you can make. These are found in the “Options for Lesson” section on the Classroom Procedure page. One suggestion is to invite a historian to come speak to your class about this major historical event!

Every lesson plan provides you with a classroom procedure page that outlines a step-by-step guide to follow. You do not have to follow the guide exactly. The guide helps you organize the lesson and details when to hand out worksheets. It also lists information in the orange box that you might find useful. You will find the lesson objectives, state standards, and number of class sessions the lesson should take to complete in this area. In addition, it describes the supplies you will need as well as what and how you need to prepare beforehand. For this lesson, the only supplies you will need are the handouts. To prepare for this lesson ahead of time, you can put students into groups of three or four for the activity and copy the handouts.

Included with this lesson is an “Options for Lesson” section that lists a number of suggestions for activities to add to the lesson or substitutions for the ones already in the lesson. For example, if you’re looking for an extra assignment for your students, you can assign each of them a different person related to or aspect of the Boston Tea Party to do additional research on and present to the class. You can also invite a historian or someone else who knows a lot about this time period to your class to speak about the Boston Tea Party. You could also have students research the taxes that people pay today. All of these suggestions (and more) can be found on the bottom right side of the Classroom Procedure page.

The teacher notes page includes a paragraph with additional guidelines and things to think about as you begin to plan your lesson. It notes that it’s a good idea to teach this lesson before any other lessons about the Revolutionary War. This will help students understand some of the causes of the war better. It also notes that while many students have likely heard of the Boston Tea Party, they may not know what it is or about the history behind it. This page also includes lines that you can use to add your own notes as you’re preparing for this lesson.

The Boston Tea Party lesson plan includes three content pages. The first section of the lesson provides students with some background information about the American Revolution and the circumstances in which the Boston Tea Party took place. Students will learn that this war took place from 1775 to 1783 and was fought by the colonists in America who wanted to be independent from Great Britain. The “tea party” was not actually a tea party at all—it was a protest against taxes!

The people of this time were paying large amounts of taxes on many goods. The revenue from these taxes went to the British government, and they were not benefitting the colonists at all. Normally, the taxes that people pay go to fund other things that they might need or use, like parks or roads. In this case, however, these taxes weren’t helping the people who were paying them. They also had no representation in the British government. This led to the slogan “no taxation without representation.” It was during this time that the Boston Tea Party took place.

Students will learn that something called the Tea Act, passed by the British government in 1773, was one of the main, direct causes of the revolution! This Act, when combined with a previous one — the Townshend Revenue Act — allowed the East India Company, which had financial troubles, to sell their tea at a low price to the American colonies. However, this would negatively impact local businesspeople who were also trying to sell tea. This made the colonists very mad. People in several different cities, including Philadelphia, New York, Charleston, Annapolis, and Boston, all found ways to protest. Two cities sent the tea back to Britain, some left it to rot on the boats it came in, but Boston chose a different method!

Next, students will learn about the actual event that took place in Boston. The Boston Tea Party was a protest organized by a group called the Sons of Liberty, a secret society who fought against taxation by the British. These people disguised themselves and snuck onto the ships in the Boston Harbor that held the tea. They threw 340 chests of tea overboard and into the harbor! That amount of tea would be worth about one million dollars today, and the British knew who did it, even with their disguises.

Because the British were upset by this protest, they passed the Intolerable Acts, which had many negative effects on the colonists. These Acts actually directly led to the colonies declaring their independence and deciding to fight for it! The Revolutionary War began a little over two years after the Boston Tea Party, and that event was one of the major catalysts for the war. While it started as a protest, it became one of the major events related to the revolution.

The Boston Tea Party lesson plan includes three worksheets: an activity worksheet, a practice worksheet, and a homework assignment. You can refer to the guide on the classroom procedure page to determine when to hand out each worksheet.

Students will work in groups for this activity. Each group will read five questions related to the Boston Tea Party and discuss them amongst each other. After they’ve discussed each question, they will write down their answers and have a class discussion about their ideas. These questions require the students to think through some of the causes and larger historical themes of this period in history.

Students may also either work alone or in pairs for this activity, depending on your preference.

For the practice worksheet, students will first match vocabulary words with their definitions. Next, they will answer a few basic questions about the Boston Tea Party, using what they learned from the lesson material.

FILL IN THE BLANKS HOMEWORK ASSIGNMENT

The homework assignment includes two exercises. For the first exercise, students will fill in the blanks in various sentences using words from a word bank. The word bank includes words like “independence,” and “rebellion”. The second exercise asks students to answer a few questions related to the Boston Tea Party.

This lesson plan includes answer keys for the practice worksheet and the homework assignment. No answer key is provided for the activity worksheet because each group’s answers will differ. If you choose to administer the lesson pages to your students via PDF, you will need to save a new file that omits these pages. Otherwise, you can simply print out the applicable pages and keep these as reference for yourself when grading assignments.

Take a look at these other lesson plans that relate to this period in history:

Perfect for my fifth grade class.

Very good to use for a review of the lessons I use to teach America History. Looking forward to more lessons in the future.

Everything that Clarendon provides is so helpful! Either it covers everything I needed it to cover or it leads in me the right direction perfect for parents who are new to homeschool! Thank you

So wonderful! One of my favorite history eras.