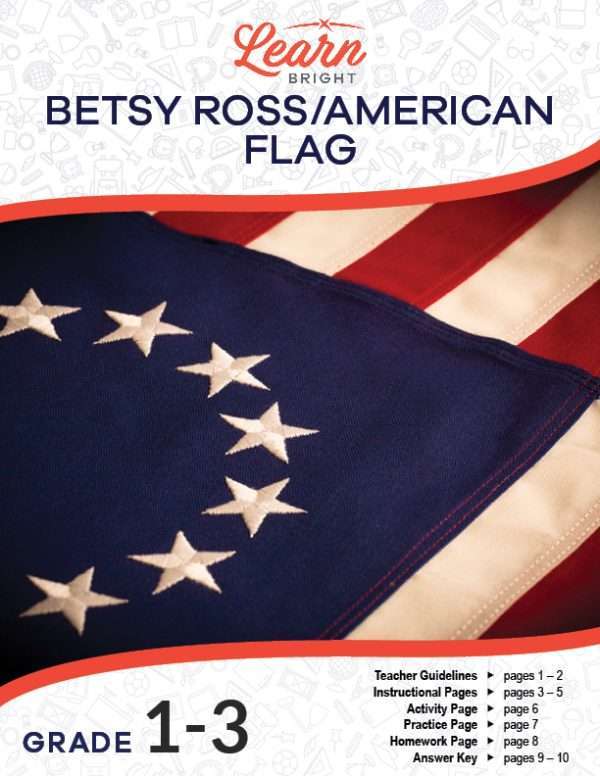 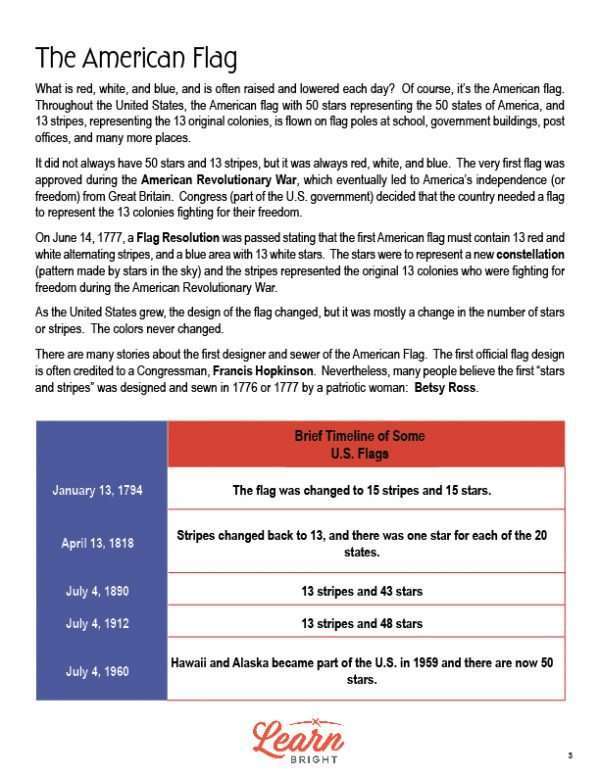 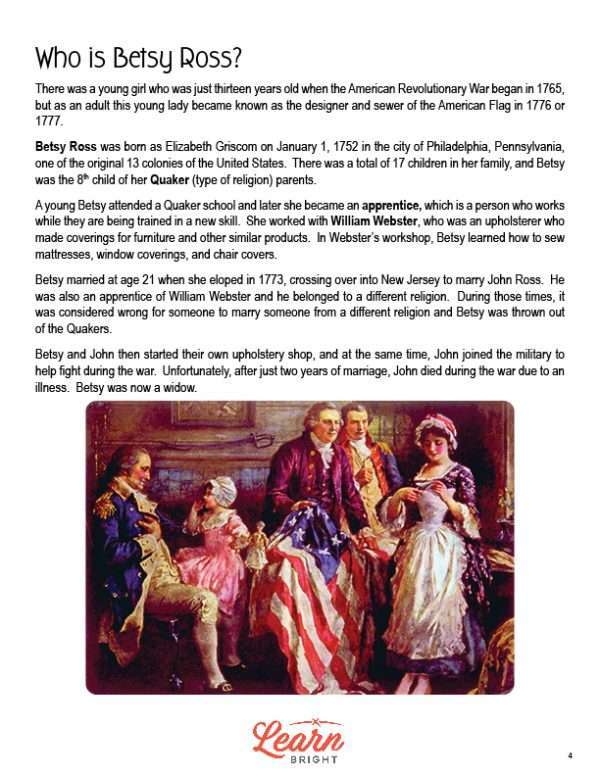 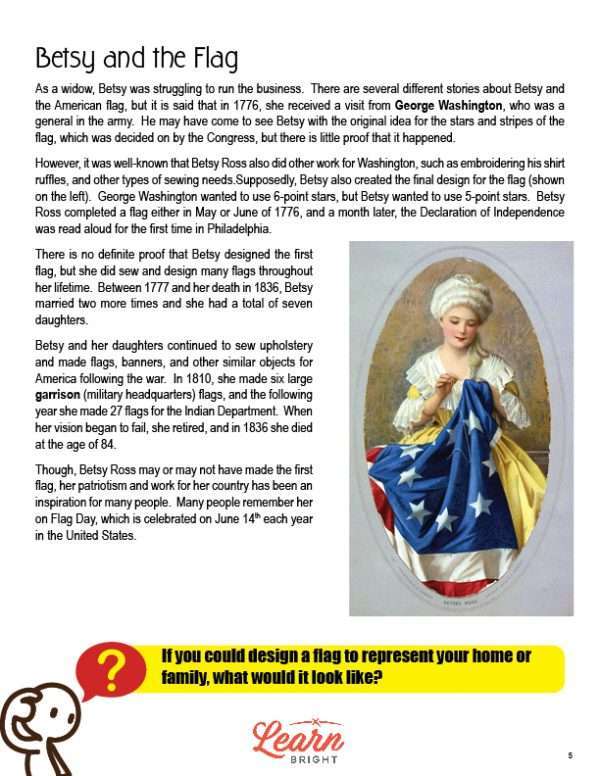 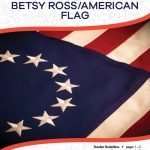 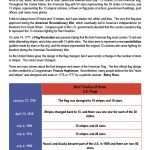 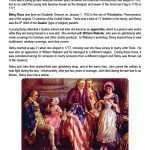 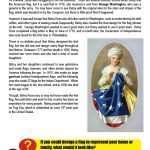 Betsy Ross and the American Flag

Included with this lesson are some optional additions and adjustments, found in the “Options for Lesson” section of the Classroom Procedure page. One of these optional additions is to show your students all 50 state flags and have them choose their favorite one!

What our Betsy Ross and the American Flag lesson plan includes

Every lesson plan provides you with a classroom procedure page that outlines a step-by-step guide to follow. You do not have to follow the guide exactly. The guide helps you organize the lesson and details when to hand out worksheets. It also lists information in the orange box that you might find useful. You will find the lesson objectives, state standards, and number of class sessions the lesson should take to complete in this area. In addition, it describes the supplies you will need as well as what and how you need to prepare beforehand. You will need colored pencils, markers, rulers, scissors, construction paper, glue, scrap paper, and the handouts for this lesson. To prepare for this lesson ahead of time, you can group students into groups of three for the activity, gather the supplies, and copy the handouts.

Included with this lesson is an “Options for Lesson” section that lists a number of suggestions for activities to add to the lesson or substitutions for the ones already in the lesson. For this lesson, one of the optional additions is to spend some time discussing other flags with your class, like the state, school, town, or other local flags. You could also show students the state flags of all 50 states and have them choose their favorite! If you’re teaching older students, you can also have a class discussion about why there is some controversy around the first flag and Betsy Ross.

This lesson plan includes three pages of content. The first page discusses the origins of the American flag. While students may have seen the flag before, they are likely not aware of who designed it or when it was created. The American flag current has 13 stripes, which represent the 13 original colonies, and 50 stripes, which represent the 50 states. Students will learn that while the flag hasn’t always had 50 stripes, it has had a similar design and the same colors since the Revolutionary War, when it was first created.

Congress thought that the country needed a flag at this time to symbolize their fight for freedom. They passed a Flag Resolution in 1777 starting that the flag must have 13 red and white stripes and a blue area with 13 stars. Congressman Francis Hopkinson designed the actual first official flag. However, many people think that Betsy Ross created and sewed the first so-called “stars and stripes” design. This section of the lesson also includes a handy timeline of some important updates to the design of the U.S. flag. It includes each time that they added more stars to the design!

Who Is Betsy Ross?

The next section of this lesson is all about Betsy Ross. She was only 13 years old when the Revolutionary War started, and would go on to design and sew the first stars and stripes American flag just over ten years later. Students will learn that Betsy Ross’ name at birth was Elizabeth Griscom and that she was born in Philadelphia. Her family were Quakers, and she was one of 17 children!

Betsy attended school and became an apprentice for an upholsterer, where she learned to sew. Betsy eloped with a man named John Ross, who was also an apprentice at the same place that she worked. They had to elope because their families were different religions, which wasn’t allowed. Betsy and her husband started their own upholstery shop. Her husband also had to join the military and help fight in the war. Unfortunately, he died during the war, leaving Betsy Ross as a widow.

Betsy and the Flag

The final section details how Betsy Ross came to design and sew the flag. Once her husband died, she had trouble running their business on her own. While the exact story is unknown, many people think that George Washington himself visited her shop and asked her to create a flag with stars and stripes. Even if this did not happen, we do know for a fact that Ross did regular work for Washington, such as embroidering his shirts. No matter how it came about, Ross completed a flag in May or June 1776.

While we have no proof that Betsy designed the first American flag, we do know that she sewed and designed many other flags. She also got married twice more during her lifetime. Ross and her seven daughters made flags and banners to support post-war America. She made six big garrison flags for the U.S. government in 1810 and 27 Indian Department flags. Whether she created the first American flag or not, there is no doubt that she was a supportive and important person during the war and beyond.

The Betsy Ross and the American Flag lesson plan includes three worksheets: an activity worksheet, a practice worksheet, and a homework assignment. Each worksheet will help reinforce students’ comprehension of the concepts and material they learned throughout the lesson. You can refer to the guide on the classroom procedure page to determine when to hand out each worksheet.

Students will work in groups for this activity to design a Class Flag. They will first discuss some of the symbols or designs that could be used for their Class Flag, and will think about some important questions to consider when designing a flag. These questions ask students to think about what design elements the flag will include, what will be represented on the flag, what colors they will use, what words (if any) will be on the flag, and if there will be an image on the flag or not.

Students can also work either alone or in pairs for this activity, depending on your preference. You can also have students paint the final Class Flag onto white t-shirts to wear! You can also create your Class Flag out of a felt material or a t-shirt.

For the practice worksheet, students will complete three different exercises. The first exercise has students match the meaning with the correct number (for example, they will match 50 with “number of stars on the American flag today”).

Next, students will match the event related to either Betsy Ross or the American Flag with the correct date or year. Finally, they will read statements and determine whether they are true or false.

FILL IN THE BLANKS HOMEWORK ASSIGNMENT

The homework assignment for this lesson has students use words from a word bank to fill in the blanks in various sentences.

Additionally, students will create a Personal Flag to represent themselves. They will design and draw their flag the bottom of this homework assignment.

This lesson plan includes answer keys for the practice worksheet and the homework assignment. No answer key is provided for the activity worksheet, as each group’s Class Flag design will be different. Similarly, there is no answer key for the last section of the homework assignment, as each student’s Personal Flag will differ. If you choose to administer the lesson pages to your students via PDF, you will need to save a new file that omits these pages. Otherwise, you can simply print out the applicable pages and keep these as reference for yourself when grading assignments.