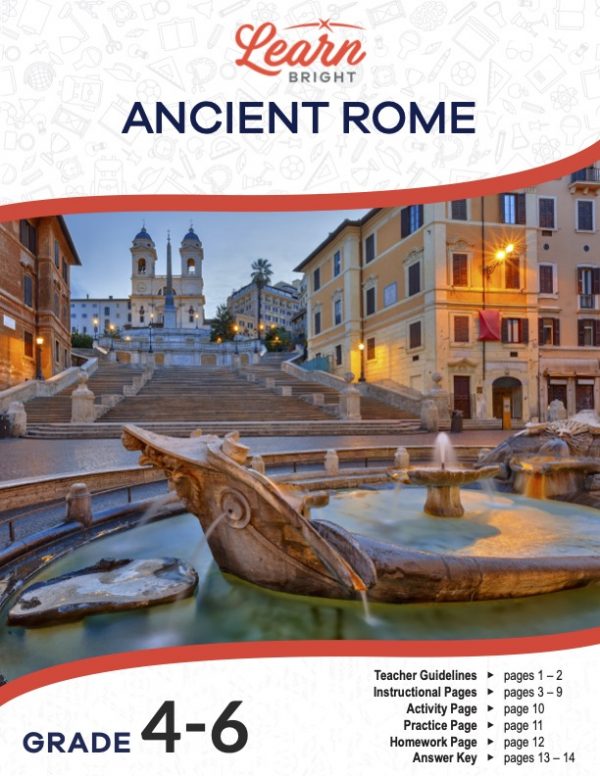 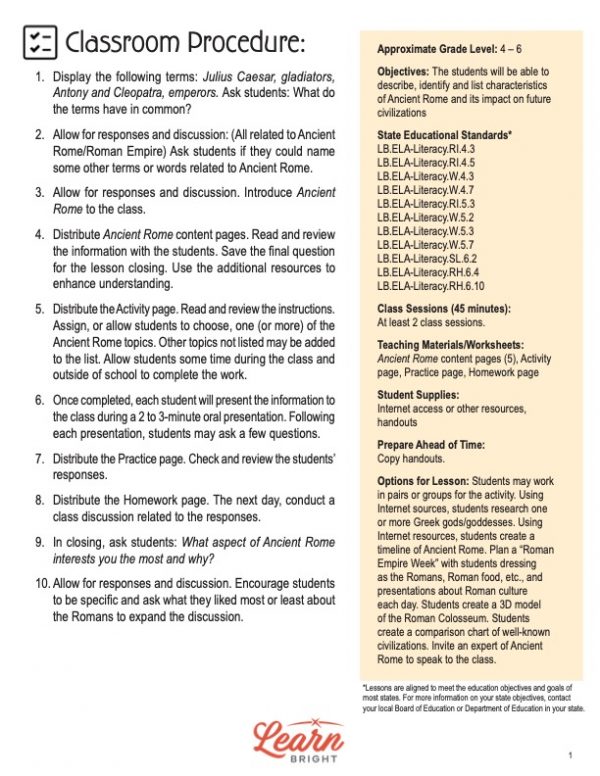 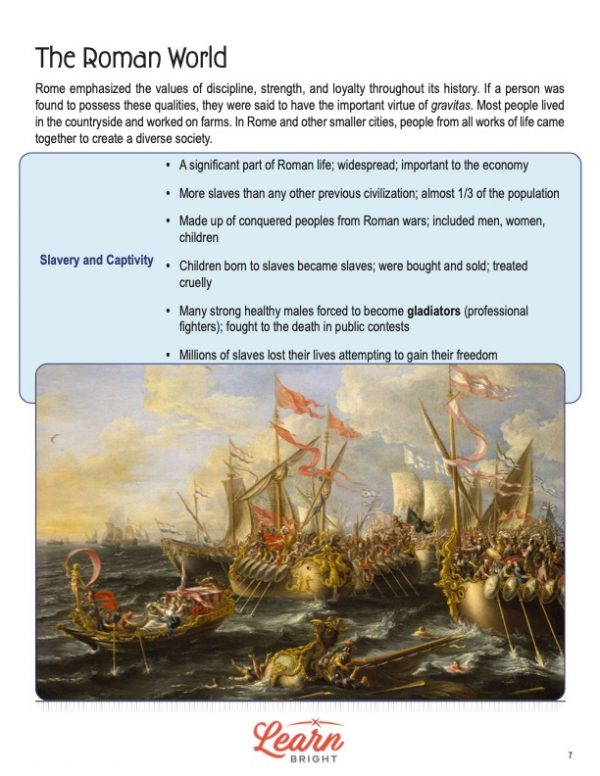 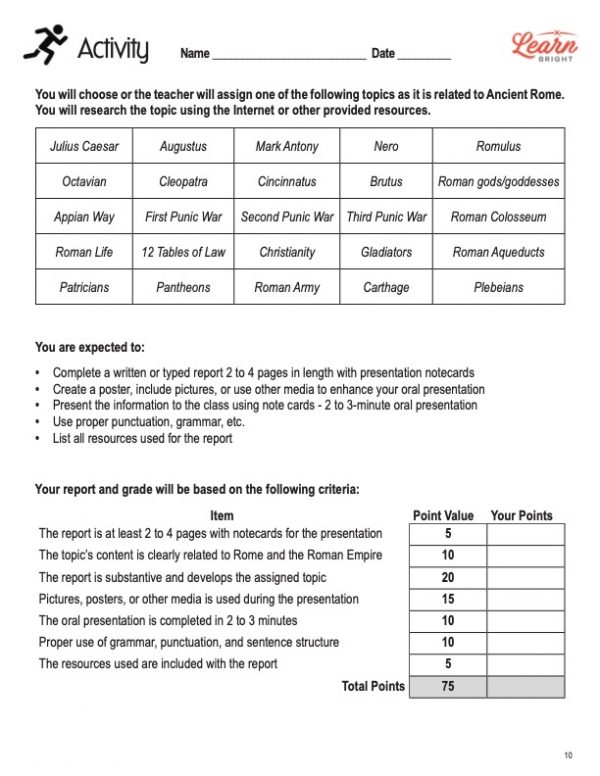 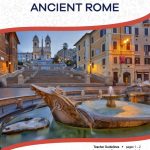 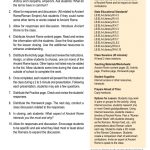 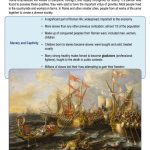 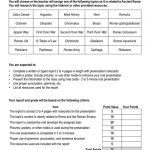 Ancient Rome introduces students to the history of this old civilization. Students will learn about various historical figures and events that took place during the period. They will also discover what the society and culture looked like for the people of this time.

The “Options for Lesson” section of the classroom procedure page offers some additional activities and enrichment opportunities for this lesson. For instance, you could assign students a specific Roman god or goddess to research and later present to the class. Students could also create 3D models of the Colosseum.

Lesson Objectives and Overview: Ancient Rome teaches students all about this civilization and its origins and lasting legacy. Students will be able to discuss the unique aspects of this civilization and its impact on future societies. Students will also learn about the role of religion, class, government, and more. This lesson is for students in 4th grade, 5th grade, and 6th grade.

Every lesson plan provides you with a classroom procedure page that outlines a step-by-step guide to follow. You do not have to follow the guide exactly. The guide helps you organize the lesson and details when to hand out worksheets. It also lists information in the yellow box that you might find useful. You will find the lesson objectives, state standards, and number of class sessions the lesson should take to complete in this area. In addition, it describes the supplies you will need as well as what and how you need to prepare beforehand. The only supplies students will need for this lesson are the handouts and internet access. You can prepare for this lesson by copying all of the handouts ahead of time.

Included with this lesson is an “Options for Lesson” section that lists a number of suggestions for activities to add to the lesson or substitute for the ones already in it. One such suggestion is to assign students a Greek god or goddess to research using various resources. You could also have students create a timeline of significant events surrounding Ancient Rome. You could plan a “Roman Empire Week” during which students dress up as Romans, bring in traditional Roman foods, and present various aspects of Roman culture. Another idea is to ask students to create a 3D model of the Roman Colosseum or create a comparison chart of well-known civilizations. Another option is to invite an expert on the subject to speak to the class.

The teacher notes page includes some additional guidelines and helpful things to think about as you begin to plan your lesson. Particular parts of this lesson, such as the discussions of the gladiators and Julius Caesar, might be the most interesting to your students. Take advantage of their interest and focus on those areas. You could also pair this lesson with ones about other ancient civilizations. This page also provides space for any notes you may have.

The Ancient Rome lesson plan has seven content pages. The lesson begins with an overview of Rome’s origin and history. This civilization began around 753 BC as a small town along the Tiber River in central Italy. It eventually grew into an empire that covered most of continental Europe. The leader of the empire was the emperor (male leader) or empress (female leader).

As one legend goes, Rome was founded by Romulus and Remus, the twin sons of the god of war, Mars. The lesson provides a brief summary of the legend that ends by describing that Romulus named the city after himself and became the first Roman king. Another legend traces the origins of Rome to Aeneid, a famous epic by the poet Virgil. There are other ideas about its origins, so historians are still unsure how the city truly began.

The lesson then describes how the government worked in the city and later empire. Most elected officials were members of wealthy, landowning families, or patricians. Plebeians, on the other hand, were ordinary, working male citizens who could vote but not hold a public office. There was a three-part government that included a group that ran the government, a group that made laws, and a group that acted as judges. This system included checks and balances among the groups so no one group had too much power. This is very similar to how the U.S. government governs America today.

Students will learn about many important Roman political figures. Julius Caesar, for instance, was a Roman general and governor who used his power to become a dictator. His actions brought Rome’s republican government to an end. In about 27 BC, Rome became an empire, and Caesar’s adopted son, Augustus, became the first Roman emperor. He brought wealth to Rome, the army kept the peace, trade increase, and the empire made great progress.

The Good, the Bad, and the Ugly

The next section of this lesson describes some of the problems Rome faced during the time. Ancient Rome influenced modern cultures and societies in many ways, but they also suffered with many issues. As Rome expanded, the republican form of government became unstable, leading to Julius Caesar’s dictatorship. In addition, the gap between the upper and lower classes grew wider. In 200 BC, the number of slaves made up about one-third of the population. Many people lost their jobs, and a civil war broke out following the deaths of two brothers who tried to help the poor.

Caesar brought about a number of reforms that helped the nation overall, but some nobles and senators worried about his growing power and popularity and their own decreasing influence. Several senators led by Marcus Brutus and Gaius Cassius plotted to assassinate the emperor and successfully did so on March 15, 44 BC. Another civil war broke out and destroyed what was left of the Roman Republic.

A rivalry ensued between army general Marc Antony and Octavian (later Augustus). In the end, Octavian became the ruler of Rome and accepted the title of Augustus, which means exalted one. The system of government he created lasted for centuries. He created a code of laws written on tablets called the Twelve Tables. The laws describes the rights of each person in the Roman Republic. A second collection of laws called the Law of Nations applied to people throughout the empire. One law that we use today in the U.S. legal system is that a person is innocent until proven guilty.

The World of Ancient Rome

The final pages of this lesson cover other aspects of Roman society. This includes a more in-depth look at slavery and captivity, which was a significant part of Roman life, with more slaves than any other previous civilization. Slaves included people who had been conquered during the Roman wars or children born to slaves. Millions of slaves lost their lives as they attempted to gain their freedom.

Gods and goddesses were also very important to the ancient society. Early Roman worshipped divine forces and gave them names and honored them through rituals. Gods were the symbol of the state. Examples include Jupiter (father of the gods), Juno (Jupiter’s wife who watched over women), and Minerva (goddess of wisdom, arts, and crafts).

Students will learn a little more about the culture and society overall. Wealth and social status made a difference in lifestyle. The rich led extravagant lives in which they had big homes, gardens, slaves, and banquets of rare foods. The poor, which included the majority of Rome’s population, barely had the necessities of life. They were unemployed and thus supported by the government using rations of grain each day. The new religion of Christianity slowly gained traction in 250 AD. Early followers met great brutality and hardship for their beliefs. However, it endured and eventually spread throughout the empire.

Eventually, the empire collapsed under its own weight. It was too large, and the leaders lost provinces one by one, starting with Britain in 410 AD, Spain and Northern Africa by 430 AD, and Italy around 450 AD.

The Ancient Rome lesson plan includes three worksheets: an activity worksheet, a practice worksheet, and a homework assignment. These worksheets help reinforce students’ grasp of the material in different ways. The classroom procedure guide outlines when to hand out these worksheets to your students.

For the activity, students will complete a 2- to 4-page report on a topic related to Ancient Rome that you assign them. They will be presenting what they learn orally to the class. The worksheet provides you with 25 different topic options. Students will research their topic and then write their report. Then they will create a poster that includes pictures and other media to enhance the oral presentation. They should try to plan the presentations to be between two and three minutes long. You can use the rubric at the bottom of the worksheet to grade students’ work.

The practice worksheet splits into two sections. For the first section, students will match 15 definitions to their correct terms from the word bank. The second section requires students to determine whether 5 statements about Ancient Rome are true (T) or false (F).

The homework assignment asks students to answer questions and prepare to discuss their answers in class. Students will use their critical thinking skills to answer the in-depth discussion questions about Roman society, its history, and its legacy. They will also have to answer some broader questions about societies in general and why they either last or collapse over time.

The final pages of this lesson include the answer keys to the practice worksheet and homework assignment. The answers for both worksheets are in red. The homework answer key provides sample answers that students’ responses should closely resemble. However, a few questions ask for opinions and will not have a single right answer. If you choose to administer the lesson pages to your students via PDF, you will need to save a new file that omits these pages. Otherwise, you can simply print out the applicable pages and keep these as reference for yourself when grading assignments.

FacebookTwitter
Be the first to review this item
Filter Reviews:
×
Clear filter
More Filters
A
12/30/2021
Anonymous

Great resource, students loved it, material was spot on.

Excellent! The narrator's voice was clear and easy to understand. The content was age-appropriate and applicable to our current unit of study.

I like using this resource for my homeschooling. It’s free and also has a lot of valuable information. It has saved me a lot of time and effort search or lesson plans. Thank You!

This is a great resource to use during lesson plan making.