Skip to main content
Close Search
Graphic Organizers: Advanced - has been added. You can add more Lessons to your download queue 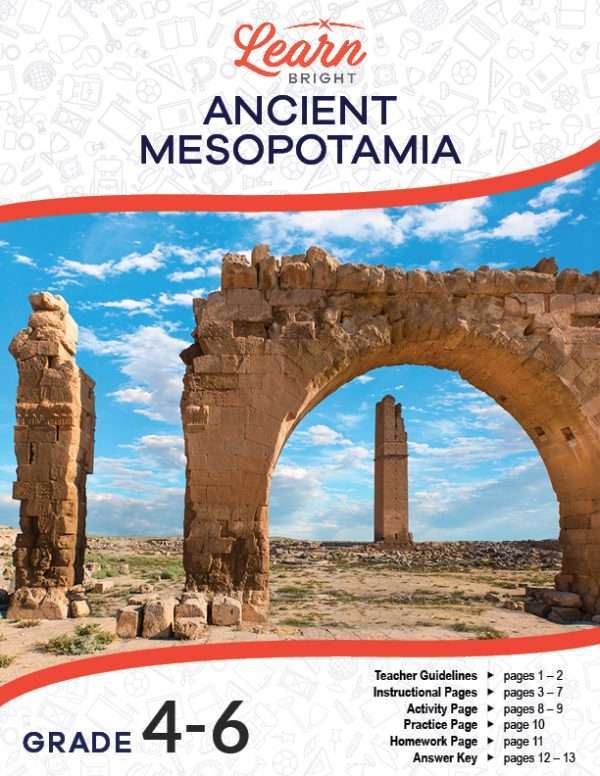 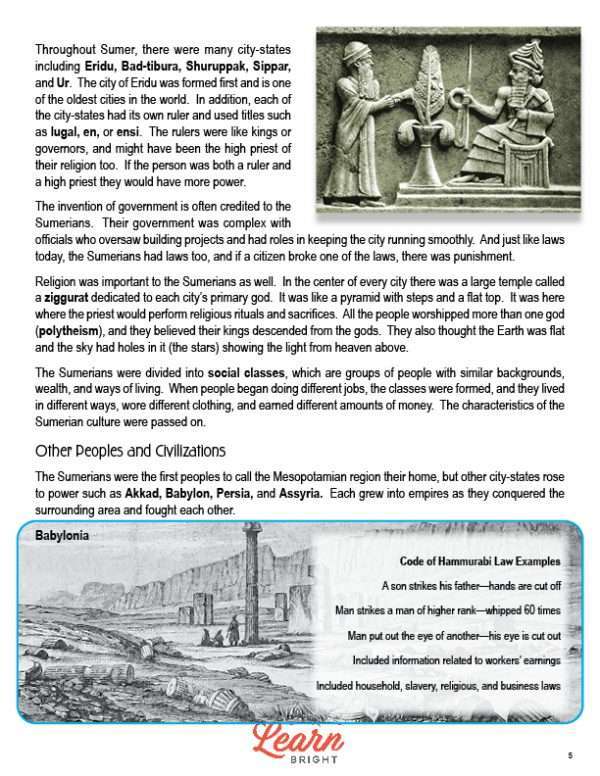 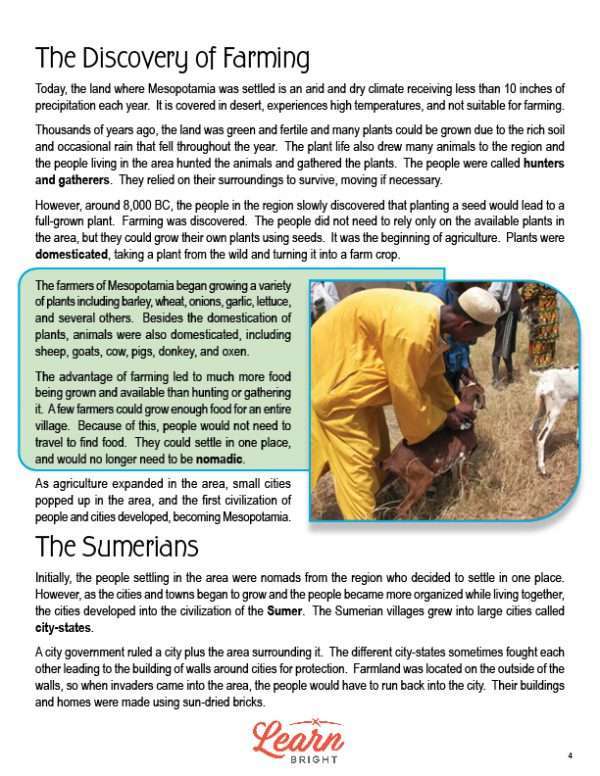 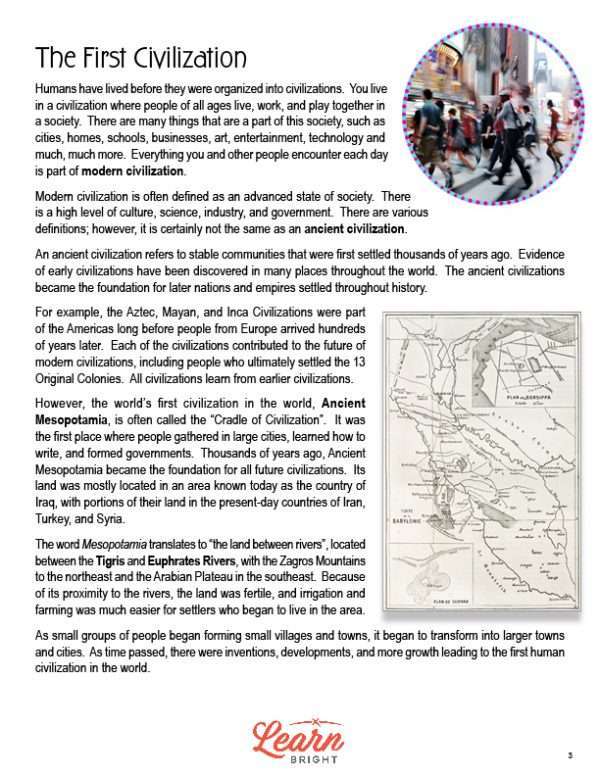 Ancient Mesopotamia teaches students about the history of Mesopotamia. It provides an overview of the civilization, the people who lived there, and its lasting impact on the world. Students will also discover interesting facts about this ancient land.

The “Options for Lesson” section of this lesson lists some optional additions and adjustments. For this lesson plan, these options include having students create a timeline of Ancient Mesopotamia or having students complete research on an assigned civilization using the Internet for research. You can also have students research the Code of Hammurabi!

Lesson Objectives and Overview: Ancient Mesopotamia teaches students all about this land and civilization, including its origins and lasting legacy. At the end of this lesson, students will be able to discuss the unique aspects of the civilization and its impact on future societies. Students will learn facts about specific aspects, such as religion, class, government, and more. This lesson is for students in 4th grade, 5th grade, and 6th grade.

Every lesson plan provides you with a classroom procedure page that outlines a step-by-step guide to follow. You do not have to follow the guide exactly. The guide helps you organize the lesson and details when to hand out worksheets. It also lists information in the yellow box that you might find useful. You will find the lesson objectives, state standards, and number of class sessions the lesson should take to complete in this area. In addition, it describes the supplies you will need as well as what and how you need to prepare beforehand. The only supplies students will need for this lesson are the handouts. You can prepare for this lesson by copying all of the handouts ahead of time and pairing students for the activity.

The “Options for Lesson” section of the classroom procedure page lists a number of suggestions for activities to add to the lesson or substitute for the ones already in the lesson. One such suggestion is to have students create a timeline of significant events in Ancient Mesopotamia. You could also divide students into large groups and assign each group one civilization to research using the internet or other resources. Students could also research the Code of Hammurabi and rewrite the laws and punishments based on their personal values. One last idea is to add an activity in which students create posters about the civilization.

The teacher notes page includes some additional guidelines and helpful things to think about as you begin to plan your lesson. It mentions that you can find a lot of additional information about Ancient Mesopotamia online. You may benefit from utilizing those resources to extend the lesson, if that’s something you want to do. This page also provides space for you to write any notes you have about the lesson.

The Ancient Mesopotamia lesson plan includes five content pages. The first section explains what ancient civilizations are and how they differ from the modern civilizations that we now live in. Students will learn that these societies were stable communities that existed thousands of years ago. Ancient Mesopotamia was the very first civilization in the whole world! Historians often refer to it as the “Cradle of Civilization” because of this fact.

The word Mesopotamia means “the land between two rivers.” Historians named Mesopotamia accordingly because it was the land between the Tigris and Euphrates Rivers. It was the first place where people created large cities and formed governments. The land covered what is now the country of Iraq along with some parts of Iran, Turkey, and Syria. The civilization continually grew over time, becoming a large group of towns and cities with more advanced inventions and growth.

Even though the land of Iraq and surrounding areas is arid and dry, it used to be green and fertile when the people of Mesopotamia inhabited it. In fact, while the land today receives less than 10 inches of precipitation a year, the soil thousands of years ago was rich from occasional rain that fell throughout the year. The plant life drew many animals to the region, and the people living in the region hunted the animals and gathered plants.

Students will learn that these ancient people are the ones who invented farming when they learned they could plant seeds. Initially, they relied on the plant and animal life around them to survive. When they discovered that planting seeds yielded full-grown plants, they became farmers and not just hunter-gatherers. They no longer had to rely on the supply of plants in the area because they could grow their own.

The farmers grew a variety of plants, including barley, wheat, onions, garlic, lettuce, and many others. They also started domesticating various animals, such as sheep, goats, cows, pigs, donkeys, and oxen. Farming led to a much larger supply of food, enough to feed an entire village. People no longer had to live a nomadic life of constant travel to find food. And as the agriculture expanded in the area, small cities began popping up. The first civilization of people and cities became Mesopotamia.

Because of the discovery of farming, people started settling down and forming towns and cities. As these cities grew, more and more people started living there. These small cities became the civilization of Sumer, which included many city-states. These city-states sometimes fought each other, which led the people to start building walls around their cities to provide protection. The farmland remained outside the city walls, so farmers would have to run back into the city if invaders came into the area.

Some of the city-states of Sumer were Eridu, Bad-tibura, Shuruppak, Sippar, and Ur. Eridu was the first city in Sumer, making it one of the oldest cities in the world. Each city-state had its own ruler who was like a king or governor. Occasionally, that person was also a high priest of their religion. In those cases, that person was even more powerful.

Historians often credit the Sumerians with the invention of government because the government of Sumer was complex and efficient. Officials oversaw building projects and held various roles to keep the city running smoothly. And just like laws today, if a citizen broke a law, they would receive a punishment.

Other Peoples and Civilizations

While the Sumerians were first to call Mesopotamia their home, other city-states rose to power as well, including Akkad, Babylon, Persia, and Assyria. Each grew into their own empires that conquered the surrounding areas. They also fought each other for power and land. These empires started their rise to power when King Hammurabi of Babylon created an empire out of the former kingdoms of Sumer and Akkad.

Babylon was most famous for its architecture, laws, and government. The laws were called the Code of Hammurabi, and they have had a long-lasting influence on many future legal systems. There were 282 laws total. Historians consider the Code an early form of a constitution.

Assyria covered modern-day Iraq and Turkey. They defeated Babylon and became a powerful military empire. Many consider them the first military power in history. They even manufactured metal wheels to help them in war. They ruled a very large empire that even took over Ancient Egypt several times throughout history.

Persia came to power after they fought and defeated Assyria. The people created the largest empire in the world and gained control of most of Mesopotamia and Ancient Egypt. They controlled the area that stretched from the Indus River in Pakistan to beyond the Nile River. Persia also had an ancient highway—the Persian Royal Road—that allowed swift communication throughout the empire. Messengers on horseback could travel 1,677 miles in a week, or 90 days on foot.

The people of Ancient Mesopotamia developed a new technology and invented many things. They were first to use the wheel for a wagon and for transportation, farming, and trade. They also invented a number system based on 60, which they used for minutes and seconds. In addition, they used a 12-month calendar and 7-day week. They even were the ones to divide a circle into 360 degrees.

When it came to writing, the people used pictograms to record information. Later, these pictures morphed into a second type of writing called cuneiform, which used symbols that represented sounds. Scribes, the only people who knew how to read and write, would use a wedge-shaped tool to press into wet clay tablets. Paper had not yet been invented.

Astronomy was another focus of Ancient Mesopotamia. Using advanced math, they followed and recorded the movements of the stars, planets, and moon. They used the information they gathered to create the first calendar. Babylonians recorded medical histories to diagnose and treat illnesses. Assyrians developed glasswork and glazes for pottery and art to help it last longer. The civilization developed and invented many other things before they were conquered in about 330 BC. However, the period continues to influence many aspects of the civilizations that followed.

The Ancient Mesopotamia lesson plan includes three worksheets: an activity worksheet, a practice worksheet, and a homework assignment. These worksheets help students demonstrate their grasp of the material they learned from the lesson in different ways. The classroom procedure guide outlines when to hand out these worksheets to your students.

Students will work with a partner to complete this activity. They will first discuss the inventions from this time period that are listed on the worksheet, such as wheels and Archimedes’ Screw. Next, they will develop an alternative for each of these inventions or developments, recording their ideas on the worksheet. Finally, they will share their alternative inventions and ideas with the class. Students can also complete this activity alone if you’d prefer.

The homework assignment for this lesson asks students to answer questions about Ancient Mesopotamia, like “Explain the difference between a modern and ancient civilization” and “What was the major religion found in ancient Persia?”. These questions are intended to test the student’s understanding of the lesson material and are based on the information provided in the content pages.

The final pages of this lesson include the answer keys to the practice worksheet and homework assignment. There is no answer key provided for the activity worksheet because each group’s answers will vary. If you choose to administer the lesson pages to your students via PDF, you will need to save a new file that omits these pages. Otherwise, you can simply print out the applicable pages and keep these as reference for yourself when grading assignments.

I used the video first and then the article. As both were very similar, it provided the students with a good understanding of the material and was great for my lower readers as they could gain the information from the video.

The packet provided the detail, vocabulary and adequate amount of work to allow my students the ability to understand the information and better comprehend what Mesopotamia was. This was their first account of the content area. Thank you!

Haven't used it yet but look forward to using it with my Gr8 socials.

I used the article and wished there was one more option that was shorter for my lower level learners. Thanks.