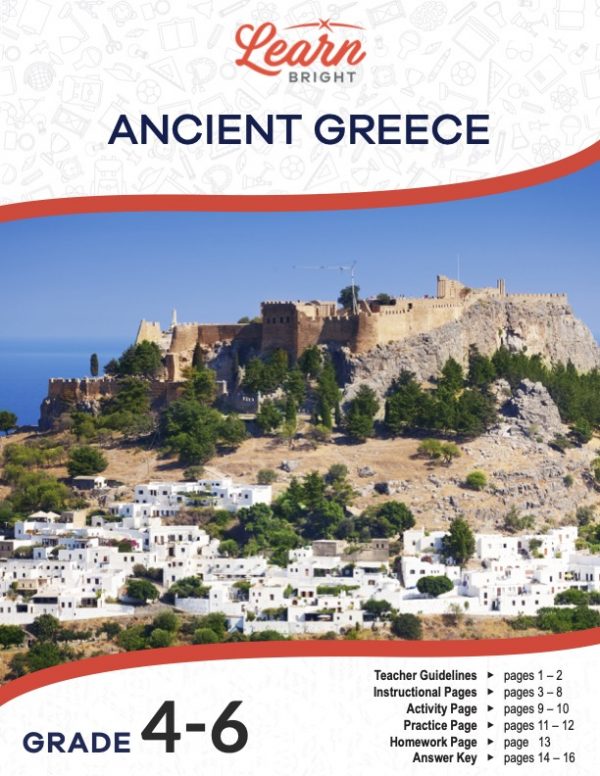 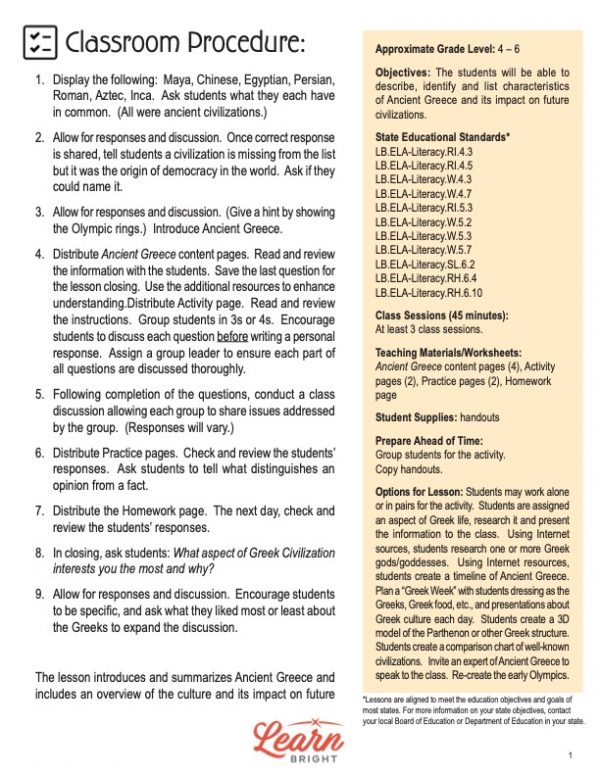 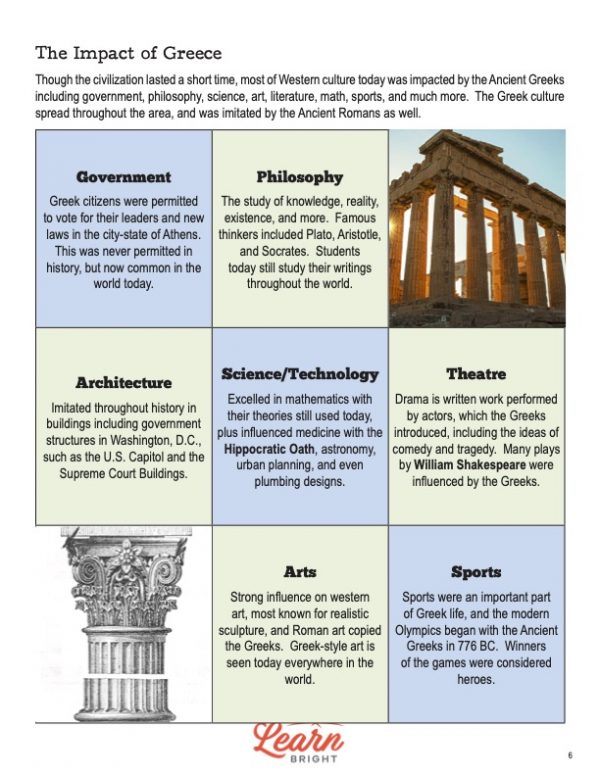 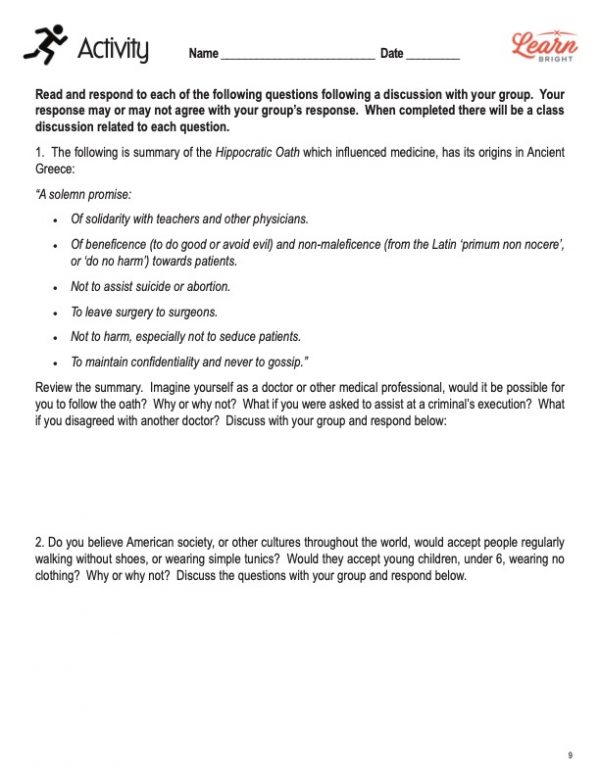 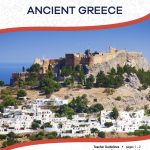 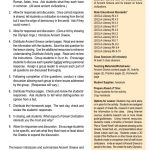 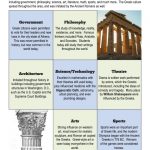 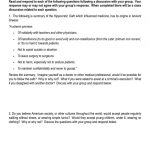 Ancient Greece teaches students about the culture and impact of this ancient civilization. Students will learn about the Olympic Games, Greek Mythology, Greek gods and goddesses, and other aspects of Greek culture.

In the “Options for Lesson” section, you’ll find some suggestions for extra activities. For instance, you might plan a “Greek Week” where you and the students dress up as Ancient Greeks might have, eat Greek food, and present information about the civilization. Another idea is to create 3D models of the Parthenon or other Greek structure.

Lesson Objectives and Overview: Ancient Greece teaches students all about what life was like in this ancient civilization that existed about 3,500 years ago. Students will be able to describe and identify various characteristics of this civilization. They will also be able to describe Ancient Greece’s impact on future societies. This lesson is for students in 4th grade, 5th grade, and 6th grade.

Every lesson plan provides you with a classroom procedure page that outlines a step-by-step guide to follow. You do not have to follow the guide exactly. The guide helps you organize the lesson and details when to hand out worksheets. It also lists information in the yellow box that you might find useful. You will find the lesson objectives, state standards, and number of class sessions the lesson should take to complete in this area. In addition, it describes the supplies you will need as well as what and how you need to prepare beforehand. The only supplies students will need for this lesson are the handouts. You can prepare for this lesson by splitting students into groups for the activity ahead of time, as well as copying all of the handouts.

Included with this lesson is an “Options for Lesson” section that lists a number of suggestions for activities to add to the lesson or substitutions for the ones already in the lesson. For the Ancient Greece lesson plan, these options include assigning students an aspect of Greek life to research and present to the class. You could have them research and present on a Greek god or goddess or create a timeline of Ancient Greece. In addition, you could plan a “Greek Week” during which both you and your students bring in Greek food, dress like Ancient Greek people might have dressed, and present on Greek culture.

Another fun idea is to create 3D models of the Parthenon or other Greek structure. You could also have your students create comparison charts of well-known civilizations. One more idea is to invite an expert in Ancient Greek history to speak to the class. Finally, you could recreate the early Olympic games, modifying where necessary.

The Teacher Notes page includes some additional guidelines and helpful things to think about as you begin to plan your lesson. It states that particular parts of this lesson, such as the discussions of the Olympic Games and Greek Mythology, might be the most interesting to your students. It suggests pairing this lesson with other lessons about ancient civilizations. This page also provides space for any notes you may have.

This lesson includes six content pages. Students start with an overview of Ancient Greece, which includes a description of where Greece is in relation to the United States. During this section of the lesson, students will learn that Ancient Greece existed about 3,500 years ago and that it has had the greatest impact on the modern world of nearly all of the ancient civilizations. Students will then learn some more about the geography of the region during that time. Greece bordered both the Mediterranean and Aegean Seas, and 80% of the mainland of Greece is mountainous.

Students will also learn about the city-states that made up Ancient Greece, such as Athens, Sparta, and Thebes. The mountains created a natural barrier between the three. Mount Olympus, the tallest mountain in Greece, was the place where the ancient Greek people believed their gods and goddesses lived. There were also thousands of small islands in the Aegean Sea itself, including Crete.

Students will learn about the different time periods of the Ancient Greek civilization, which lasted for about 700 years total. The time periods this lesson covers are the Archaic period, from 800 BC to 480 BC; the Classical Period, from 480 BC to 323 BC; and the Hellenistic Period, which lasted from 323 BC to 146 BC. The Archaic period was characterized by the beginning of the Olympic games, the war between Sparta and Messenia, and Homer’s writing of the Iliad and the Odyssey, among other things. The Classical period included the Greek and Persian Wars and the building of the Parthenon, as well as the writings of Sophocles, Socrates, and Plato.

Finally, the Hellenistic period was the shortest of all the major periods of Ancient Greece. Alexander the Great died during this period, and the Romans conquered Greece, which made it part of the Roman Empire. Students will learn how to distinguish between these periods.

The Impact of Greece

During this part of the lesson, students will consider how the Ancient Greek civilization impacted future civilizations, like the ones they live in now. The lesson covers topics such as government, architecture, science and technology, arts, and sports. Greek citizens of Athens could vote for their leaders and on new laws. This had never been permitted before this time, yet it’s common throughout the world today.

Greek architecture inspired many buildings, including government buildings in the U.S. The government structures in Washington, D.C., such as the Capitol and Supreme Court buildings, mimic the style of architecture from Ancient Greece. Greek art also had a strong influence on western art. The Greeks used a very realistic style in their sculptures. Roman art actually copied that of the Greeks.

The Greeks also introduced theater to the world as actors performed dramas. They influenced many of William Shakespeare’s plays. One of the most well-known contributions from Ancient Greece is the Olympic games. Sports were important to Greek life, and they considered winners of the Olympic games heroes.

Daily Life for the Greeks

Students will then learn about the average home life of someone from Ancient Greece. Most Greek children, for instance, would play in an interior courtyard. Men had their own rooms in the house, called androns. And some homes also had rooms just for women, called gynaikons. Children’s lives were much different in Ancient Greece than they are today. Only boys received formal schooling and education. Greek children were considered adults when they were only 13 years old.

The way that people accessed food was very different for the Ancient Greek people. Most Greeks were farmers and ate only what they grew. Some important and common foods at this time were olives, wine, bread, cheeses, fish, fruits, and vegetables. Meat was for special occasions only. And when it came to apparel, clothing from this time always served a purpose. Men and women both wore tunics year-round, as the weather was typically mild with hot summers. They rarely wore any shoes, and small children and babies often didn’t wear anything at all.

The occupations of the Greeks varied. Men often worked as farmers, fishermen, soldiers, teachers, or craftsmen. On the other hand, women were almost always homemakers who cared for the children, cooked, cleaned, and sewed. Students will also learn that slavery was common in Ancient Greece. Despite the advanced nature of the civilization, there probably as many slaves as there were free people living in Greece. Even poor families often likely owned at least one slave.

The Ancient Greece lesson plan includes three worksheets: an activity worksheet, a practice worksheet, and a homework assignment. These worksheets help students demonstrate their grasp of the material they learned from the lesson in different ways. The classroom procedure guide outlines when to hand out these worksheets to your students.

For the activity worksheet, students will read and respond to various questions that relate to Ancient Greece. They will then discuss their answers with their group. These questions are meant to get students thinking about the topic in a more holistic way.

The second page of the practice worksheet splits into three sections. The first section will require students to answer questions about the impact of Ancient Greece on future Western civilizations. The second section will require them to answer questions about the daily lives of the Greek people. The third section lists statements that students will have to mark as either fact (F) or opinion (O).

The final pages of this lesson include the answer keys to the practice worksheet and homework assignment. There is no answer key for the activity worksheet as those questions do not have universal answers. Every student will have different answers for each question. If you choose to administer the lesson pages to your students via PDF, you will need to save a new file that omits these pages. Otherwise, you can simply print out the applicable pages and keep these as reference for yourself when grading assignments.

FacebookTwitter
Be the first to review this item
Filter Reviews:
×
Clear filter
More Filters
A
06/28/2022
Anonymous

I LOVED IT !!! It was a big time saver for me. I enjoyed the Information and activities. Thank You !!!

The materials are so user-friendly. I like that there is a video that can be used to build background first. The text information visually well-organized. My students are enjoying the material and don't even mind the follow-up activities. Easy to create other tasks around this material as well.

The material is very appropriate for the grade I teach. The background information and the lesson plan are thorough. Thank you.

I have enjoyed using these resources for teaching my special needs class about ancient history. Informative without going too far over the heads of my students, and required little modification. It sure saved me lots of time.

So glad we came across this YouTube page which led us to the website to find additional learning materials. The booklets are fantastic! Thank you for having such age appropriate learning at affordable prices!