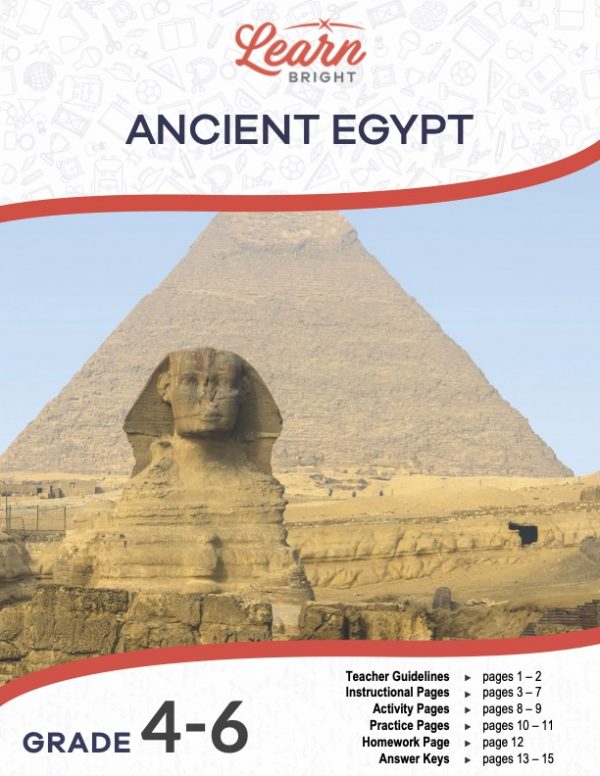 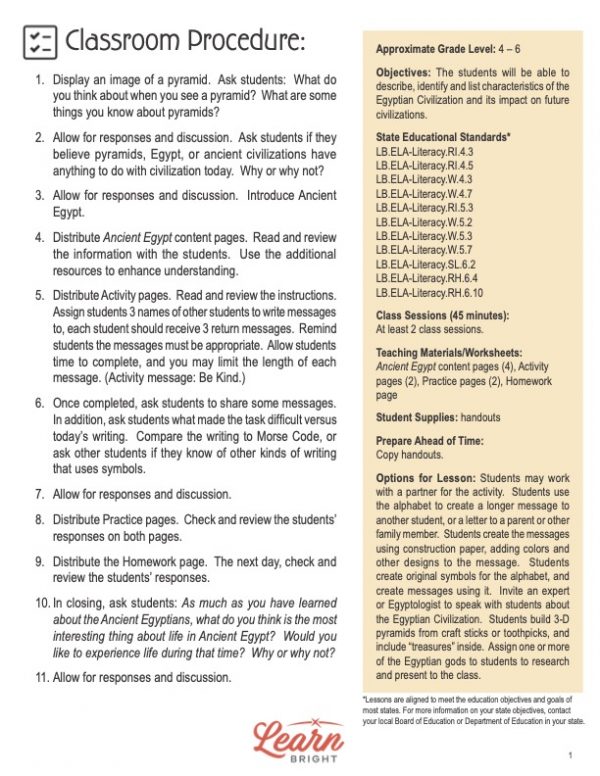 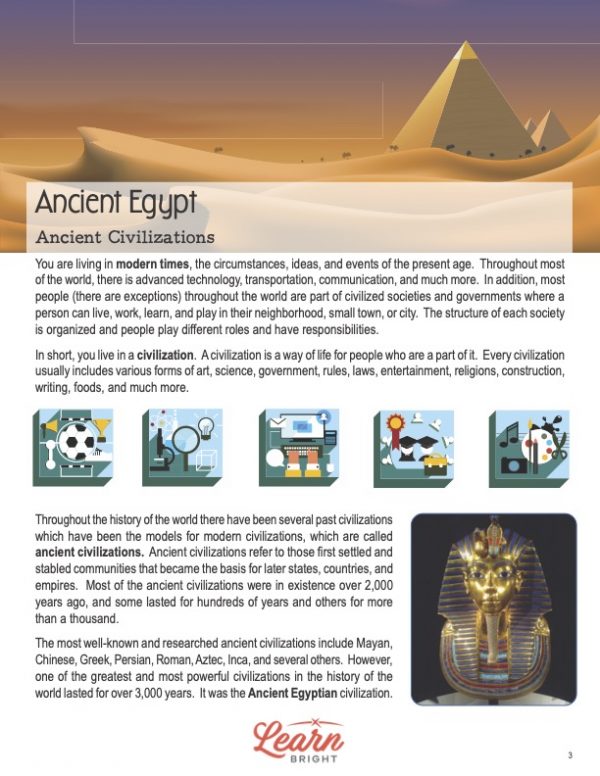 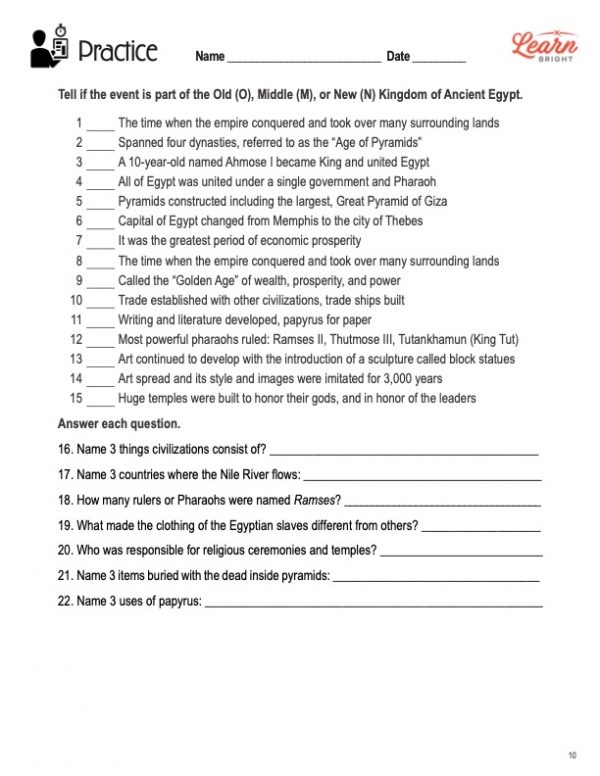 Our Ancient Egypt lesson plan teaches students about the history of this civilization and includes an overview of the culture and its impact on future civilizations. Students learn specifically about the pyramids, daily life, and other aspects of the Egyptian culture.

The “Options for Lesson” section of the class procedures page offers some additional activities and enrichment opportunities for this lesson. One option is to assign students a short research project on an Egyptian god or goddess. You could also have students create a 3D model of a pyramid or create their own original symbols for an alphabet like hieroglyphics.

Lesson Objectives and Overview: Our Ancient Egypt lesson plan introduces and summarizes Ancient Egypt and includes an overview of the culture and its impact on future civilizations. Students will be especially interested in the pyramids, daily life, hieroglyphics, and other aspects of the Egyptian culture. At the end of the lesson, students will be able to describe, identify and list characteristics of the Egyptian Civilization and its impact on future civilizations. This lesson is for students in the 4th grade, 5th grade, and 6th grade.

Every lesson plan provides you with a classroom procedure page that outlines a step-by-step guide to follow. You do not have to follow the guide exactly. The guide helps you organize the lesson and details when to hand out worksheets. It also lists information in the orange box that you might find useful. You will find the lesson objectives, state standards, and number of class sessions the lesson should take to complete in this area. In addition, it describes the supplies you will need as well as what and how you need to prepare beforehand. For this lesson, the only supplies you will need are the handouts.

Included with this lesson is an “Options for Lesson” section that lists a number of suggestions for activities to add to the lesson or substitutions for the ones already in the lesson. One suggestion is for students to build a 3D model of a pyramid using craft sticks or toothpicks as an additional activity. Students could also create their own original symbols for an alphabet that they then use to write messages. You can also have students use the provided hieroglyphic alphabet to write longer messages, like letters, to their parents or friends. Another option is to invite an egyptologist to speak to your class about the ancient civilization. One final idea is to assign students an Egyptian god or goddess to research and later present to the class.

The teacher notes page includes a paragraph with additional guidelines and things to think about as you begin to plan your lesson. It notes that there is a lot of information about Ancient Egypt online that you can use to extend this lesson if you want to. It also notes that students will likely be especially interested in the pyramids and hieroglyphics. You can use the blank lines to add your own notes as you prepare.

Where Was Ancient Egypt?

The ancient Egyptian civilization lasted for over 3,000 years. Like most ancient societies, ancient Egypt existed near water in the northeast area of Africa. The Nile River ran through the middle and emptied into the Mediterranean Sea. It was actually crucial to Egypt’s survival because of the lack of rain in the area. They depended on the floods of the Nile to water their crops. Then they would take advantage of the mud left over after the flood to plant seeds because the mud made for excellent soil.

Papyrus, or reeds, grew along the banks of the river. Egyptians used the reeds to make paper, as well as build boats. The Nile also provided fish for food. The people could use nets to catch fish, and to catch the birds that lived near the water. Finally, the Nile River provided transportation, which made it easy to trade and travel from place to place quickly.

The next section of this lesson explains how Egypt’s ancient history divides into three major kingdoms or periods: Old Kingdom, Middle Kingdom, and New Kingdom. These are the time periods during which Ancient Egypt was at its strongest. The times in between these periods were intermediate periods. Each kingdom divided further into a number of dynasties.

Students will learn detailed information about each kingdom. The Old Kingdom, which existed from 2575 BC to 2150 BC, lasted over 400 years. There was a strong government, and the society was very prosperous. This is also the period during which they build the Great Pyramid of Giza. The period spanned four dynasties, and historians refer to it as the Age of Pyramids. They established trade during this time and built trade ships.

During the Middle Kingdom, all of Egypt united under a single government and pharaoh (ruler) following the political unrest of the intermediate period. It lasted from 1975 BC to 1640 BC. The borders expanded, the capital city changed to Thebes instead of Memphis, and they developed a powerful army to protect the country from invaders. This period is when ancient Egypt was the most prosperous economically.

The New Kingdom existed from 1520 BC to 1075 BC and followed an intermediate period during which foreign people ruled. Historians consider it the Golden Age because the nation was wealthy, prosperous, and powerful. The Egyptians built huge temples to honor their gods and their leaders. The youngest pharaoh ruled in this period; he was only 10 years old when he became king. Other famous and powerful rulers of the time include Ramses II and Tutankhamun, or King Tut!

The final section of this lesson goes into detail about various aspects of life in Ancient Egypt, including their homes, clothing, food, jobs, and children. Students will learn that nobles and peasants had very different lives and living spaces. Most people during this time were farmers. Other jobs included carpenters, weavers, jewelers, potters, soldiers, scribes, or religious priests and priestesses.

Nearly everyone wore lightweight, white clothing because of the intense heat. Men wore kilts overtop a loincloth and a shirt, and women wore straight dresses with either one or both shoulder straps. Slaves wore fabrics with patterns on them. Children often wore nothing at all until age 5 or 6.

Speaking of children, the Egyptians treated children well, and no child would ever be homeless. They considered boys troublemakers, whether they were or not, so the girls had an easier time in general. They encouraged kids to become strong and agile through playing games. Unfortunately, about half the children died before the age 5 due to disease and dangerous animals.

Students will also learn about the gods and goddesses of Ancient Egypt and the festivities they held to celebrate them. Some of these gods included Ra, the sun god; Isis, the mother goddess; and Osiris, the god of the dead. The people built many large and elaborate temples filled with gardens and statues to honor the deities.

The Ancient Egypt lesson plan includes three worksheets: an activity worksheet, a practice worksheet, and a homework assignment. Each worksheet helps students solidify their comprehension of the concepts they learned throughout the lesson. You can refer to the guide on the classroom procedure page to determine when to hand out each worksheet.

The practice worksheet has two pages and separates into five section. The first section requires students to read a list of events and determine whether they were part of the Old Kingdom (O), Middle Kingdom (M), or New Kingdom (N). They will then answer seven questions based on what they learned in the lesson. For the third section, they will describe the difference between five pairs of people, places, or things. They should be as specific as possible. Next, they will match gods and goddesses to their devotions. The last section requires students to decide whether five statements are true (T) or false (F).

The homework assignment also splits into two sections. The first section asks students to match terms and statements that relate to Ancient Egypt. There are 10 statements total in this section. For the second section, students will fill in the blanks for 10 statements using the terms in a word bank.

The final pages of this lesson include the answer keys to the practice worksheet and homework assignment. The answers for both worksheets are in red. The third section of the practice worksheet provides sample answers, and students’ responses may vary. However, their answers should generally reflect those of the sample responses on the answer key. If you choose to administer the lesson pages to your students via PDF, you will need to save a new file that omits these pages. Otherwise, you can simply print out the applicable pages and keep these as reference for yourself when grading assignments.

My students have really enjoyed the lessons from yall

I LOVE this ready to use lesson! Thank you for also including links to extra videos to watch. I absolutely love EVERYTHING about this resource!!

I enjoyed the lesson and the links to all of the resources!

This packet was by far

This packet was by far the greatest. Thank you!!!!