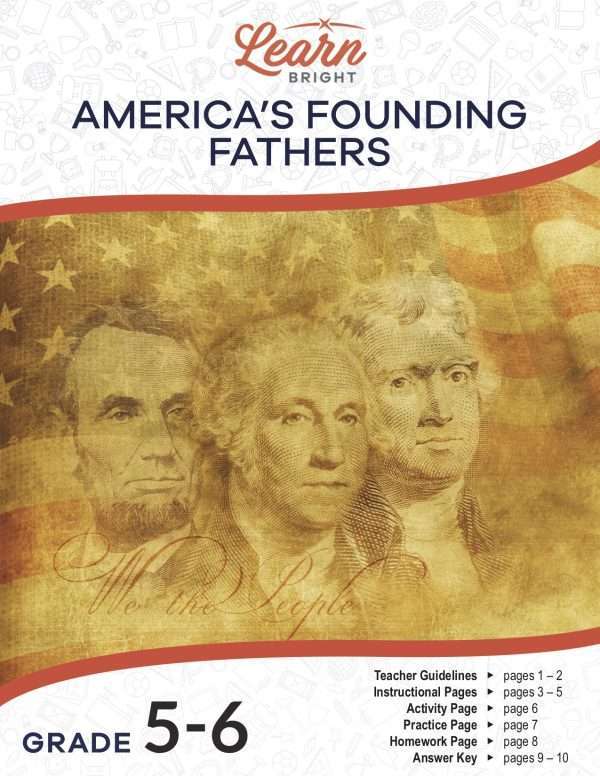 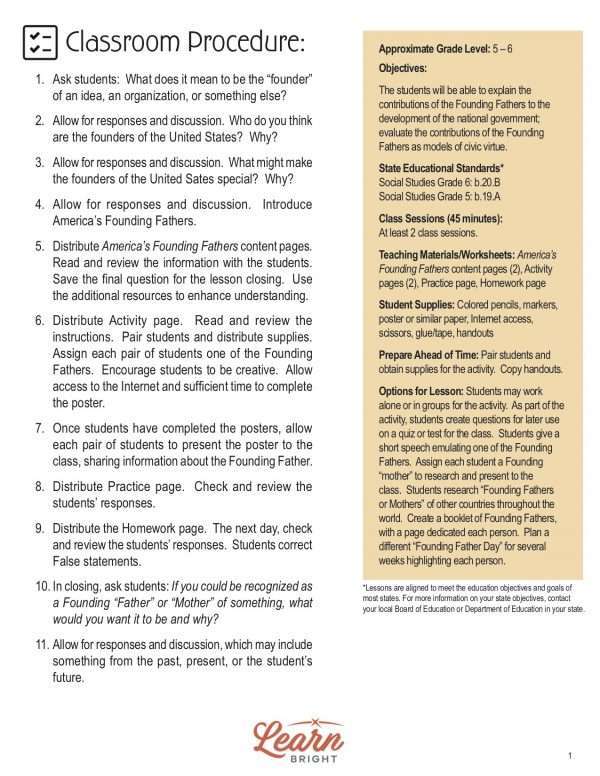 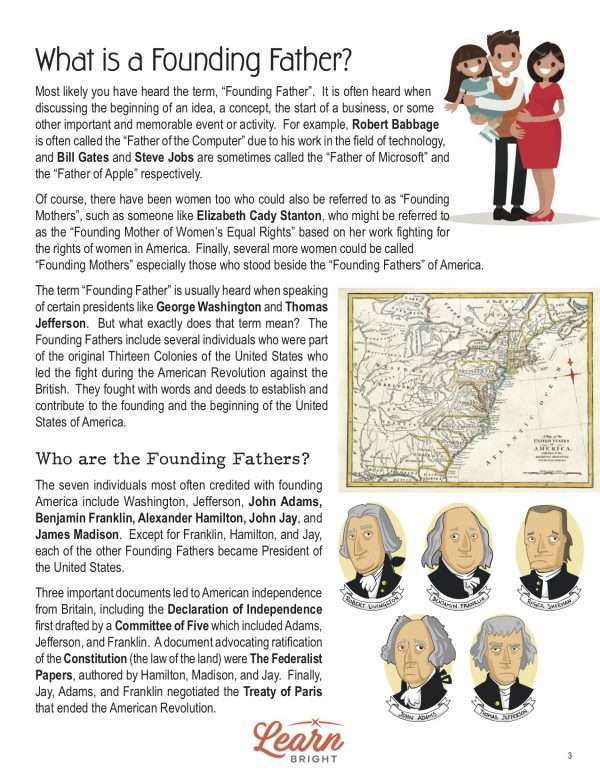 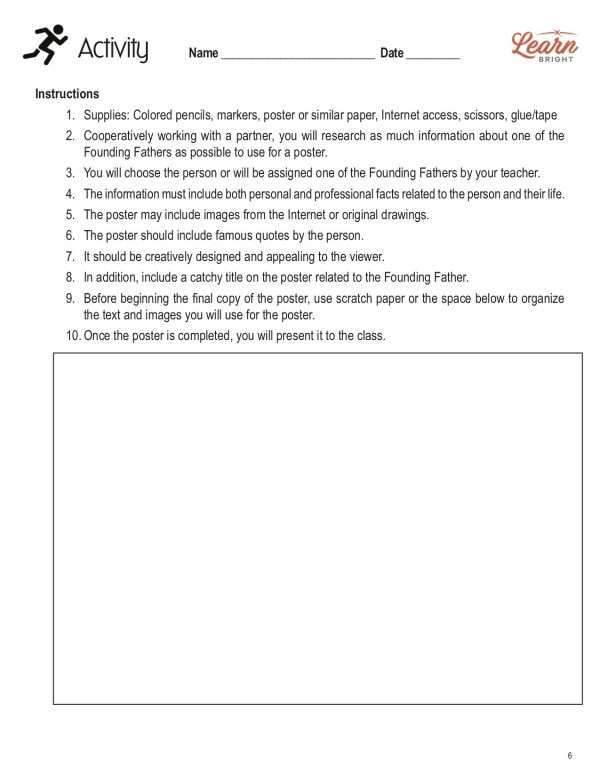 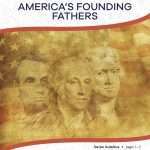 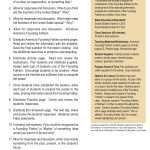 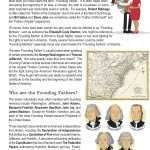 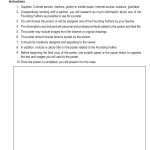 This lesson includes several optional additions or adjustments that you can use to expand or alter the lesson! Some of these ideas are to have students give short speeches emulating one of the Founding Fathers or to have them research the Founding Mothers or Fathers of other countries.

Every lesson plan provides you with a classroom procedure page that outlines a step-by-step guide to follow. You do not have to follow the guide exactly. The guide helps you organize the lesson and details when to hand out worksheets. It also lists information in the orange box that you might find useful. You will find the lesson objectives, state standards, and number of class sessions the lesson should take to complete in this area. In addition, it describes the supplies you will need as well as what and how you need to prepare beforehand. For this lesson, you will need colored pencils, markers, poster or other paper, internet access, scissors, glue or tape, and the handouts. To prepare for this lesson ahead of time, you can pair students for the activity, gather the supplies, and copy the handouts.

Included with this lesson is an “Options for Lesson” section that lists a number of suggestions for activities to add to the lesson or substitutions for the ones already in the lesson. One optional addition to this lesson is to assign each student a Founding “mother” to research and present to the class, to recognize the contributions of women to the Revolutionary War and the founding of the U.S. You can find many other options on the bottom right of the Classroom Procedure page.

What is a Founding Father?

This lesson includes three pages of content. The first section of this lesson explains to students what we mean when we call someone a Founding Father. Students will learn that when we call someone the “father” of something, we mean that they were instrumental in creating or developing that thing. Women can also be the “father” (or “mother”) of something! For example, we call Cady Elizabeth Stanton the “Founding Mother of Women’s Equal Rights” for her work fighting for the rights of women.

Within the context of the United States, being a Founding Father means that they were part of the original Thirteen Colonies and helped lead the fight against the British during the American Revolution. Each of these people were crucial in some way to the United States gaining its independence. These contributions could be through their actions, their words, or their ideas.

Who are the Founding Fathers?

The next section of this lesson delves into the specific Founding Fathers of America. Students will learn that we’ve most often given seven people this title: George Washington, Thomas Jefferson, John Adams, Benjamin Franklin, Alexander Hamilton, John Jay, and James Madison. Four of these men – Washington, Jefferson, Adams, and Madison – would go on to be President of the United States!

Students will also learn that there are three foundational documents that were a very important part of the U.S. gaining its independence from Britain. These are the Declaration of Independence, the Federalist Papers, and the Treaty of Paris. These were all created, authored by, or contributed to by some of the Founding Fathers.

Next, the lesson describes some of the roles that the Founding Fathers played in the founding of America and in running it once they had gained their independence.

Finally, the lesson notes that we have a large amount of information about most of the Founding Fathers. Many of them owned slaves, which complicates and stains their legacies. Despite this, they were all instrumental in gaining independence from the British and the birth and founding of the United States.

The America’s Founding Fathers lesson plan includes three worksheets: an activity worksheet, a practice worksheet, and a homework assignment. You can refer to the guide on the classroom procedure page to determine when to hand out each worksheet.

The activity worksheet for this lesson is a fun and creative assignment where students work with a partner. The pairs will create a poster that gives information about one of the Founding Fathers, as assigned by the teacher. They will first complete research on their assigned Founding Father using the internet or other sources. They will need to look for both personal and professional facts about them. Next, they will find images or create original drawings. They will also need to include famous quotes and make sure they’ve designed their poster well and that it is appealing to the viewer. They must also include a catchy title. Once they finish their poster, they will present it to the class.

Students many work alone or in groups for this activity, depending on your preference.

The  homework assignment has two sections. For the first section, students will answer various questions about the Founding Fathers. Some of these are short answer questions that will require students to really think through what they’ve learned during this lesson. Next, they will read various statements about the Founding Fathers and this time period in general. They will determine whether these statements are true or false.

This lesson plan includes answer keys for the practice worksheet and the homework assignment. Students’ answers for the first section of the homework assignment will vary, but the answer key provides some possible answers. No answer key is provided for the activity, as each pair’s poster will look different and include different information. If you choose to administer the lesson pages to your students via PDF, you will need to save a new file that omits these pages. Otherwise, you can simply print out the applicable pages and keep these as reference for yourself when grading assignments.