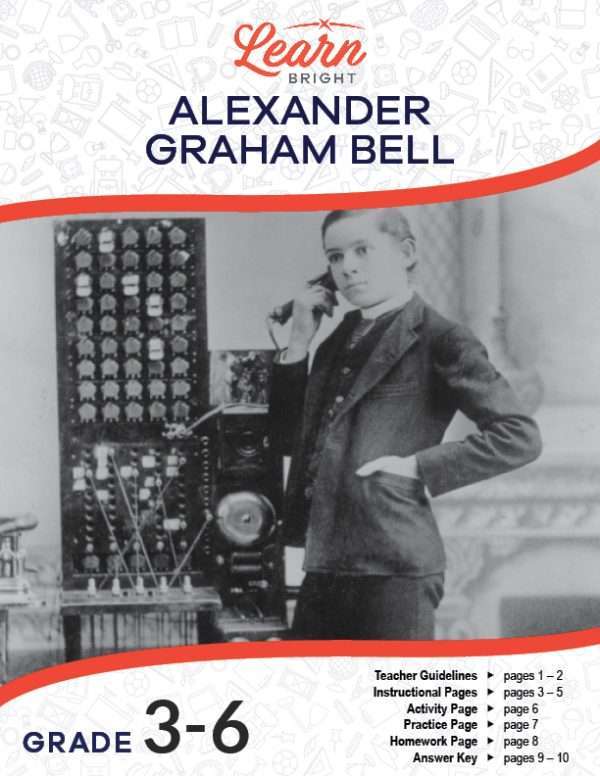 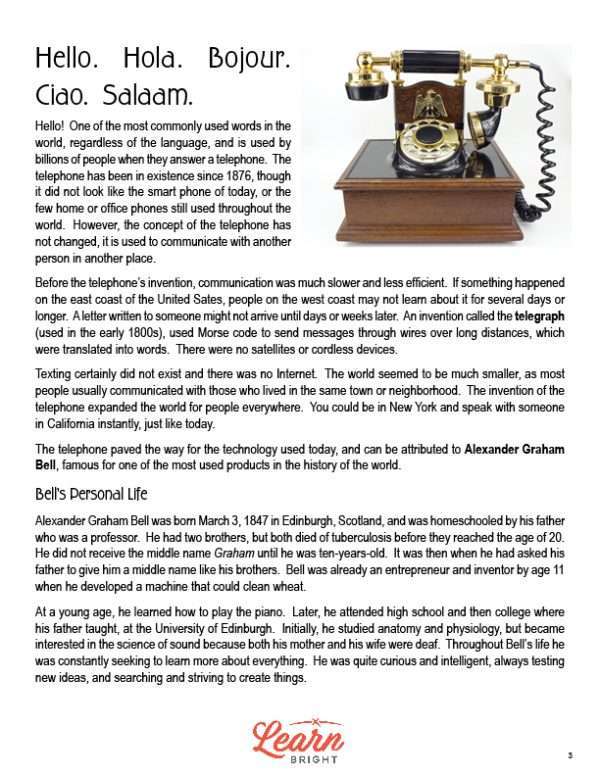 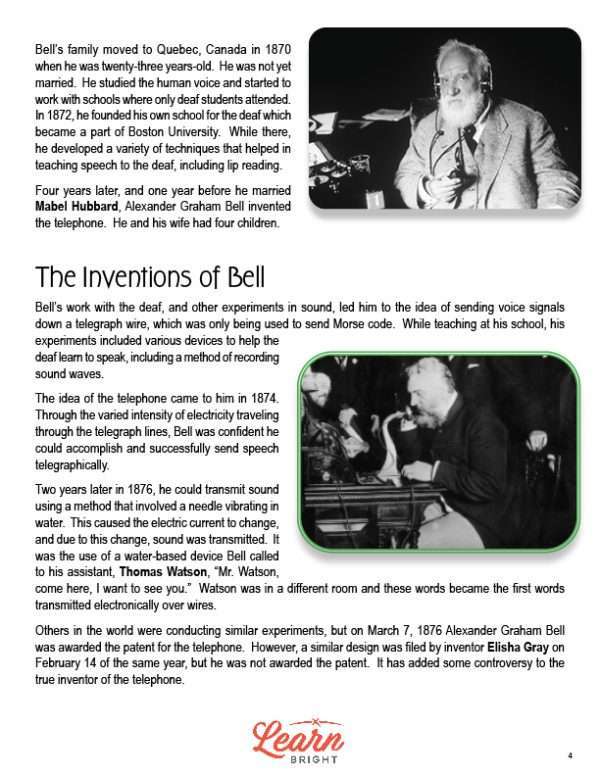 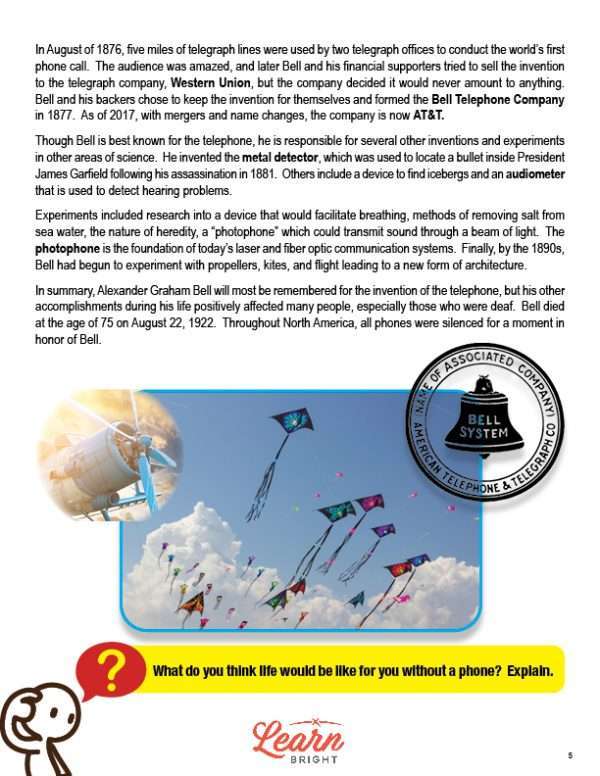 Included with this lesson are some additional “Options for Lesson,” found on the Classroom Procedure Page. One of these optional additions is to have your students do research on the history of phone design and create a timeline of phones, starting with very early phone designs and ending with the present day.

Lesson Objectives and Overview: Alexander Graham Bell introduces students to the life and contributions to society of this interesting historical figure. Students will learn about the impact of several of his inventions — including the telephone — and the influence they had on everyday life for many people. This lesson is for students in 3rd grade, 4th grade, 5th grade, and 6th grade.

Every lesson plan provides you with a classroom procedure page that outlines a step-by-step guide to follow. You do not have to follow the guide exactly. The guide helps you organize the lesson and details when to hand out worksheets. It also lists information in the orange box that you might find useful. You will find the lesson objectives, state standards, and number of class sessions the lesson should take to complete in this area. In addition, it describes the supplies you will need as well as what and how you need to prepare beforehand. For this lesson, the only supplies you will need are the handouts. To prepare for this lesson ahead of time, you can pair students for the activity and copy the handouts.

Included with this lesson is an “Options for Lesson” section that lists a number of suggestions for activities to add to the lesson or substitutions for the ones already in the lesson. One of the optional additions for this lesson is to have your students create a timeline of Bell’s life, including images or drawings. You can also use string and cups to create “phones” to open the lesson, beginning a classroom conversation about modes of communication. Additionally, you could have students research the history of telephone design and create a timeline using images to show the evolution in phone design. You can find more optional additions and lesson adjustments on the bottom right of the Classroom Procedure page.

This lesson includes three pages of content. The first section gives some context and background information for the lesson. Students will learn that communication used to be much slower than it is today. People had to letters, which would not arrive at their destination for days or even weeks. Next, people invented the telegraph, which sent messages over larger distances with Morse code. It wasn’t until the late 1800s that Alexander Graham Bell would invent the telephone and make communication faster and easier for everyone.

Next, students will learn about Alexander Graham Bell’s personal life, including his upbringing and his education. Students will learn that he was born in Scotland in 1847 and was actually homeschooled. He started inventing things at only 11 years old! He later attended high school and college at the University of Edinburgh, where he studied the science of sound because his mother and wife were both deaf. When he was in his early 20s, he and his family moved to Canada, where he started to work with schools for deaf students. He eventually founded his own school for the deaf in Boston, Massachusetts.

Next, students will learn all about the many things that Alexander Graham Bell invented during his lifetime. Bell had spent a lot of time working with deaf people and experimenting with sound. This gave him the idea to try to send voices through a telegraph wire. At that time, we had only used telegraph wires to send Morse code, not voices!

The Inventions of Bell

In 1874, Bell had the idea for the telephone! The success of various experiments related to sound made him confident that he could send speech via telegraph. The first time he successfully sent his voice from one room to another was in 1876, when he spoke to his assistant using a needle that vibrated in water and caused the electric current to change, transmitting sound. Bell officially won the patent for the telephone in March 1876. However, he was not the only one experimenting and another inventor had filed a very similar patent about a month earlier.

Shortly thereafter, they used five miles of telegraph lines to complete the first ever phone call! Bell tried to sell his invention to a telegraph company, who refused, so he and his investors decided to start their own company, the Bell Telephone Company. Students may find it interesting to learn that that company still exists today — it’s called AT&T!

Students will then learn that Bell also invented a number of other things that are either still used today or are the foundation for some modern technologies. His inventions include the metal detector, the audiometer, and the photophone.

Bell’s many inventions made communication easier for everyone. While he will be remembered primarily for inventing the telephone, his contributions to technology for the deaf are also significant. Students will learn that when he died in 1922, at the age of 75, we silenced all phones in North America for a moment in honor of him.

The Alexander Graham Bell lesson plan includes three worksheets: an activity worksheet, a practice worksheet, and a homework assignment. You can refer to the guide on the classroom procedure page to determine when to hand out each worksheet.

Students will work with a partner to discuss and respond to a series of questions and exercises. The first section has students pretend to be Alexander Graham Bell and Thomas Watson. They spoke over the telephone in honor of the opening of the transcontinental telephone line. The pairs of students will pretend to be Bell and Watson and will imagine what they said to each other, writing their imagined conversation down on the worksheet.

The second exercise has students read a quote from Alexander Graham Bell, discuss its meaning, and tell how the meaning of the quote could help them.

Students can also work either or alone or in larger groups for this activity, depending on your preference.

FILL IN THE BLANK PRACTICE WORKSHEET

For the practice worksheet, students will first fill in the blanks in sentences using words from a word bank. Some of the words in the word bank include “speech,” “inventor,” and “anatomy”. Next, they will answer questions about Alexander Graham Bell using what they learned from the lesson material.

The homework assignment has students complete four short exercises. For the first exercise, students will match descriptions to the “who” or “what” that it describes. Next, they will describe the original purpose for three of Bell’s inventions, the metal detector, the audiometer, and the photophone. Then, they will name five other things that Bell either did research on or experimented with during his lifetime. Finally, they will place ten events from Bell’s life in chronological order.

This lesson plan includes answer keys for the practice worksheet and the homework assignment. No answer key is provided for the activity worksheet as students’ responses will vary. If you choose to administer the lesson pages to your students via PDF, you will need to save a new file that omits these pages. Otherwise, you can simply print out the applicable pages and keep these as reference for yourself when grading assignments.

My son had an easy time navigating. We read the article together and he answered the questions on his own.

This Alexander Graham Bell packet is full of information and fun activities for the kids.

This will be extremely helpful in my 6th grade classroom. I plan on using them as enrichment activities/emergency lesson plans. Students can complete independently.

I use this for my kindergarten and third grader and they love it!! So much to choose from!!!!