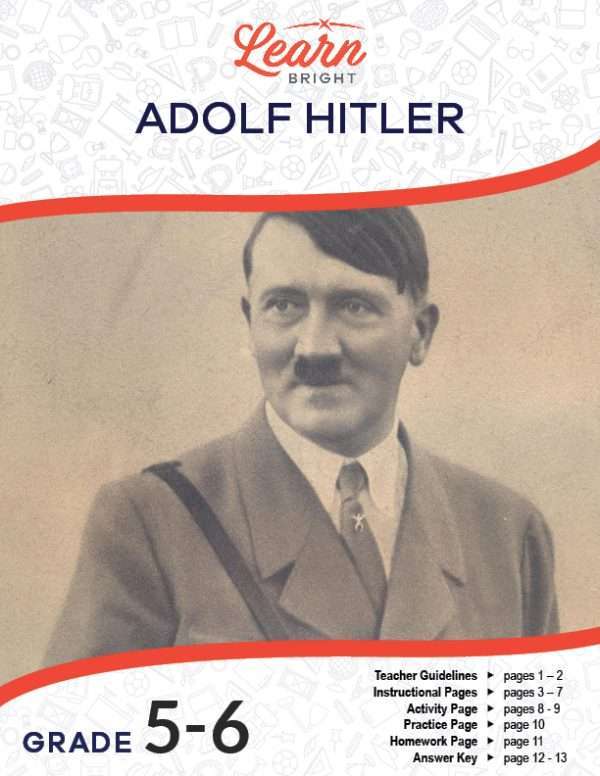 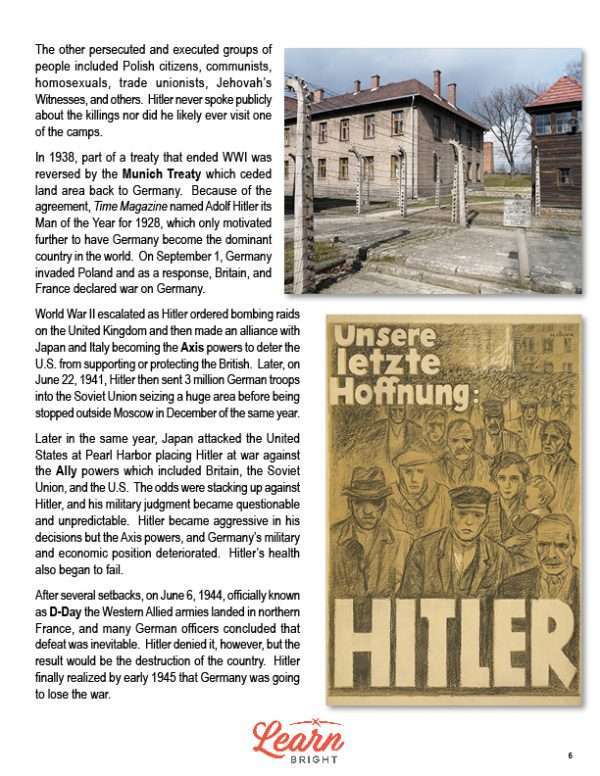 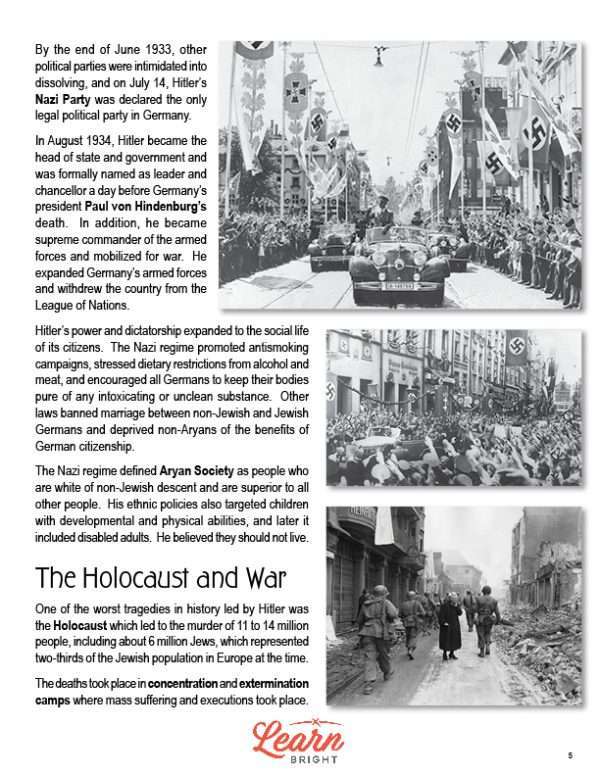 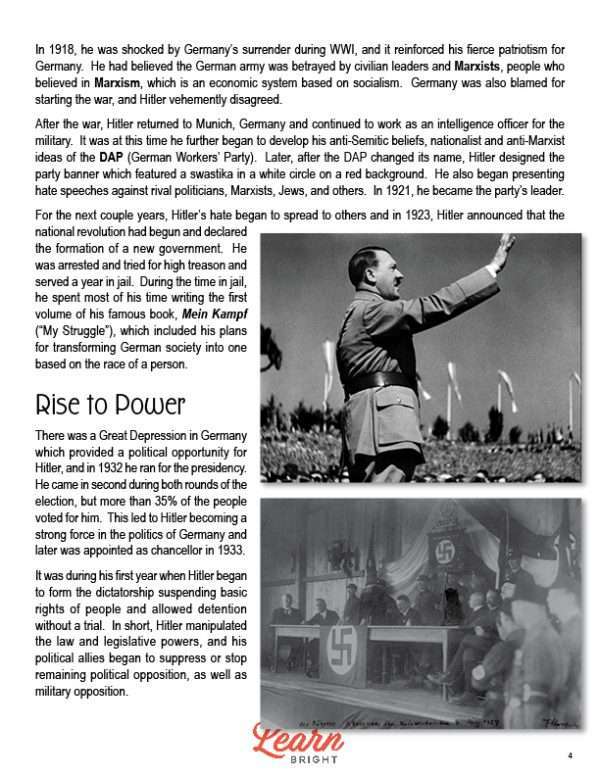 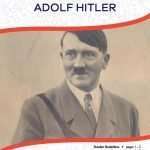 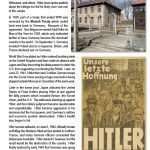 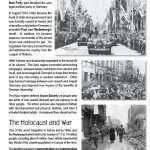 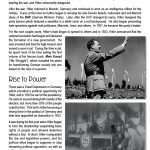 Our Adolf Hitler lesson plan teaches students about the dictator Adolf Hitler and his impact on the world as he led Germany and was responsible for millions of deaths during the Holocaust. Students learn about his early life, his rise to power, his beliefs, and more.

Included with this lesson plan is an “Options for Lesson” section which provides some ideas for additions or modifications to the lesson. One of the optional additions suggests inviting a historian who studies this period of history to your class to speak about Hitler in depth.

Lesson Objectives and Overview: Our Adolf Hitler lesson plan introduces students to Adolf Hitler and his impact on the world as he led Germany and was responsible for millions of deaths during the Holocaust. Most students will have heard of Hitler but may not fully understand the negative impact he had on people’s lives during World War II. You may use this lesson in conjunction with other lessons relates to World War II, the Nazi Party, and the Holocaust. At the end of the lesson, students will be able to identify Adolf Hitler, identify his impact on the world, and list other facts about his life. This lesson is for students in 5th grade and 6th grade.

Every lesson plan provides you with a classroom procedure page that outlines a step-by-step guide to follow. You do not have to follow the guide exactly. The guide helps you organize the lesson and details when to hand out worksheets. It also lists information in the orange box that you might find useful. You will find the lesson objectives, state standards, and number of class sessions the lesson should take to complete in this area. In addition, it describes the supplies you will need as well as what and how you need to prepare beforehand. For this lesson, the only supplies you will need are the classroom handouts. To prepare ahead of time, you can group students for the activity and copy the handouts.

Included with this lesson is an “Options for Lesson” section that lists a number of suggestions for activities to add to the lesson or substitutions for the ones already in the lesson. One of the optional additions to this lesson plan is to have students create a timeline of Hitler’s life, including events from World War II, the Holocaust, and other related events. You can also invite someone to speak to your class who was alive during the second World War, or a historian who specialized in the time period. If you want to add another activity to the lesson, you can have students write an essay about how they think someone could become a dictator. Finally, you could assign each student a different dictator to research and present to the class.

The Adolf Hitler lesson plan includes five pages of content. The first part of this lesson introduces students to Hitler’s background and some of the things that he’s most known for, like being one of the world’s most infamous dictators and orchestrating the Holocaust. Students will learn that he was actually born in Austria, a Central European German-speaking country, but moved to Germany when he was three years old. Hitler became interested in German nationalism at a young age and this interest led to many of his choices over the years. He applied to art school but they did not accept him. Despite not being a German citizen, Hitler served in the German army during World War I, and their surrender in 1918 devastated him. He strengthened his belief in German nationalism during this time, and he believed Marxists had betrayed the German army.

Students will learn that, following the war, he continued to work for the military and in the government and eventually became the leader of the German Workers’ Party. During this time, he also began giving speeches against Jewish people, Marxists, other political parties, and more. He continued to spread his ideas to others and even attempted to throw over the government! They arrested him and he spent a year in jail. He wrote his famous book, Mein Kampf, during this time. This book contains many of Hitler’s ideas and ideals and advocates for the transformation of Germany based on race.

The next section of the lesson discusses how Hitler gained power in the 1930s and early 1940s. Students will learn that Germany experienced a Great Depression during early 1930s. This allowed Hitler the opportunity to gain political power. He ran for president in 1932 but came in second place. However, in 1933, they appointed him chancellor of Germany. Immediately, Hitler began seizing more and more power. He used his power to deny people their basic rights and even outlawed all political parties except for his, the Nazi Party.

Students will learn that Hitler officially became head of state of Germany in August 1934. He mobilized for war, withdrew Germany from the League of Nations, and expanded the German armed forces. All of these things strengthened his position and personal grasp of power in the country. His government started imposing many rules on the citizens of Germany. These included everything from dietary restrictions to banning marriage between Jewish and non-Jewish people. Hitler and his followers believed in the supremacy of the Aryan Society. This meant that they considered people who were white and non-Jewish to be genetically superior to everyone else. This is also when he began to target disabled people, as well.

The Holocaust and War

The final section of this lesson plan delves into Hitler’s role in the Holocaust and World War II. Students will learn that Hitler orchestrated a horrible tragedy called the Holocaust. They murdered 11 to 14 million people during the Holocaust, including 6 million Jewish people. These killings happened in concentration and extermination camps.

Hitler’s invasion of Poland in 1938 caused Britain and France to declare war, beginning World War II. The war escalated over the next few years. Germany entered an alliance with Japan and Italy, forming the Axis powers. Students will learn that the United States entered the war in 1941, following Japan’s attack on Pearl Harbor. The U.S. joined the Allied powers, which included Britain and the Soviet Union. Then, on D-Day, June 6th, 1944, the Allies made significant progress and turned the tides of the war.

Students will learn that it was at this point that Hitler knew he was going to lose the war. He was hiding out in a bunker and married his girlfriend there. He also found out that they had assassinated another dictator at the time, Mussolini. Hitler and his wife committed suicide in the bunker the day after they got married. He left behind a ravaged Europe and a legacy of destruction. Hitler was responsible for the murder of millions of people during the Holocaust and immense suffering. He failed in his mission to create a single-race society.

The Adolf Hitler lesson plan includes three worksheets: an activity worksheet, a practice worksheet, and a homework assignment. You can refer to the guide on the classroom procedure page to determine when to hand out each worksheet.

Students can also work alone for this activity if you’d prefer. You can also add additional questions to this activity or conduct the entire activity as a class discussion!

For the practice worksheet, students will place 20 events in Hitler’s life in chronological order. These events span from Hitler’s birth to his death.

This lesson plan includes answer keys for the practice worksheet and the homework assignment. No answer key is included for the activity worksheet as students’ answers will vary. If you choose to administer the lesson pages to your students via PDF, you will need to save a new file that omits these pages. Otherwise, you can simply print out the applicable pages and keep these as reference for yourself when grading assignments.

The reading is written in a way for students to easily understand the material. The discussion questions included were very engaging. I used them in groups and then a share out to the class, and they students were very into the topics and enjoyed discussing.

Valuable information about a fascinating human being.

we are in the process of reading Africa

The students loved it.!

good resource, some word choices will have to be addressed depending on grade level