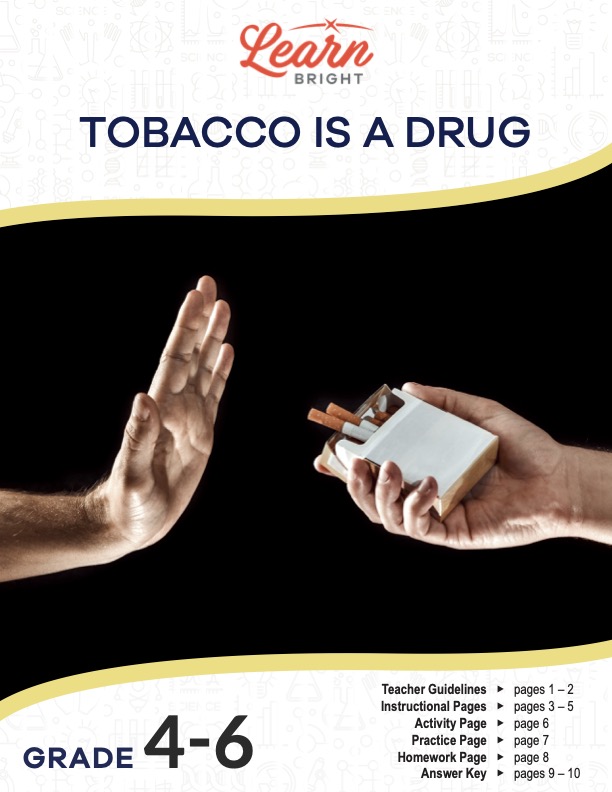 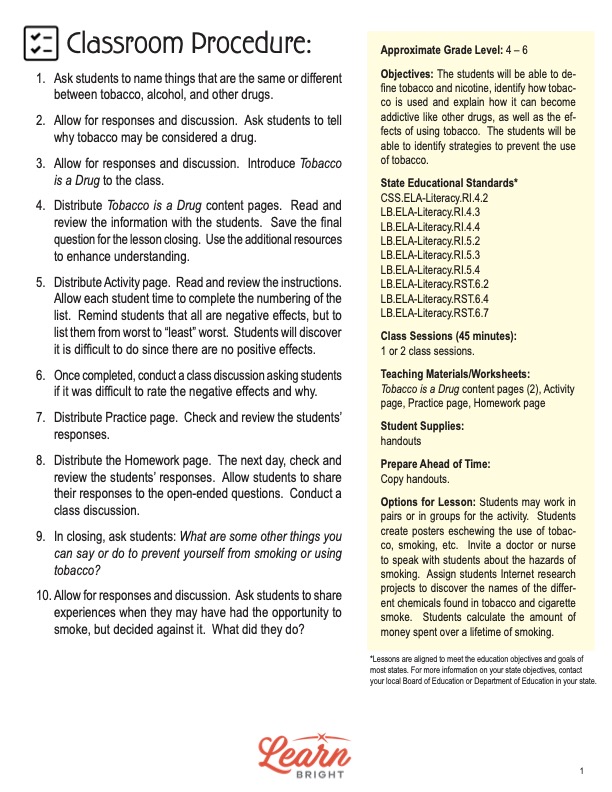 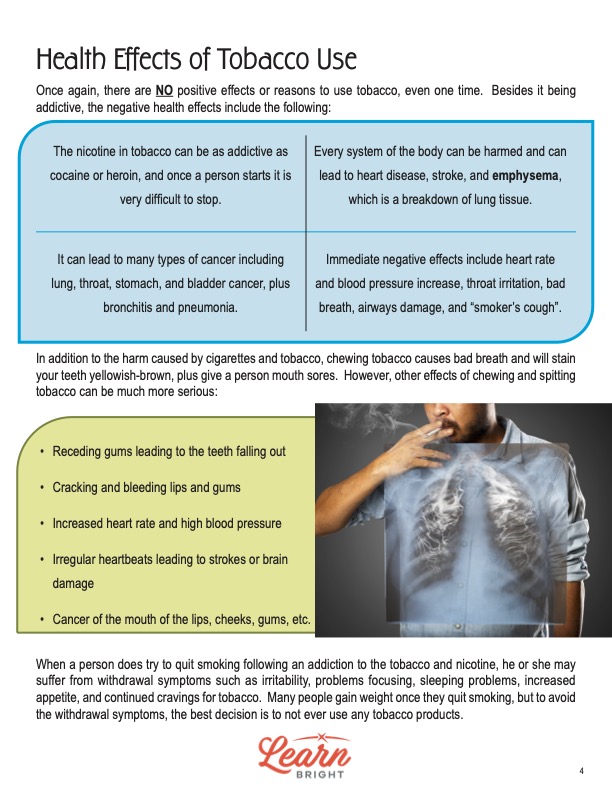 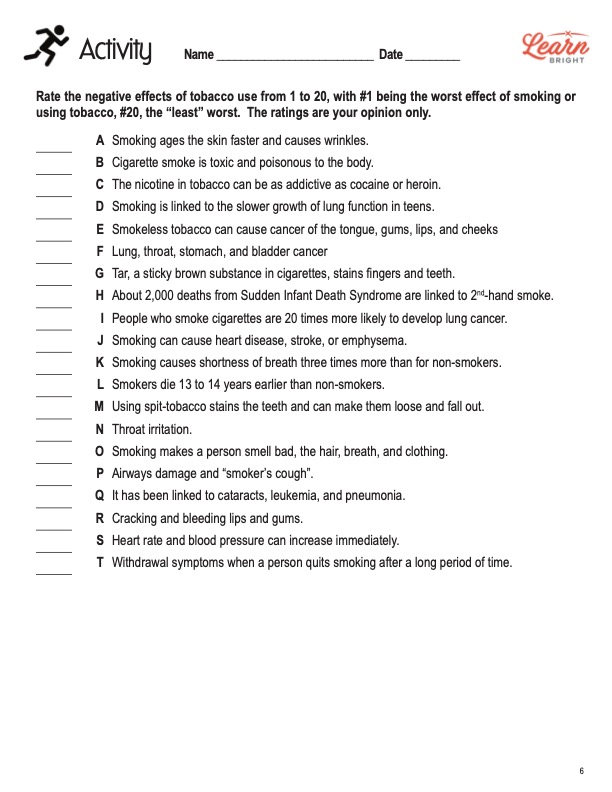 Tobacco Is a Drug

Tobacco Is a Drug explores the dangers of tobacco, smoking cigarettes, and vaping. Students will learn that many people are addicted to tobacco or nicotine and find it very hard to overcome. They will also discover that just people engage in these activities, they are not bad people. Students will likewise learn about the effects that tobacco has on a person’s health and discover ways to prevent its use.

You can check out the “Options for Lesson” section of the classroom procedure page for additional suggestions for ideas and activities to incorporate into the lesson. One idea is to invite a medical professional to speak to the class.

What our Tobacco Is a Drug lesson plan includes

Lesson Objectives and Overview: Tobacco Is a Drug introduces students to what tobacco and nicotine are. Students will identify how people use tobacco and explain why it can be addictive as other drugs are. They will also discover the effects of using this drug and identify strategies to help prevent its use. This lesson is for students in 4th grade, 5th grade, and 6th grade.

The “Options for Lesson” section of the classroom procedure page lists a number of suggestions for ideas and activities you could incorporate into the lesson. One idea is to have students create posters eschewing the use of tobacco, smoking, and so on. You could invite a doctor or nurse, or other medical professional, to speak with the class and answer questions about the hazards of drug use. Another suggestion is to create a research assignment for students to discover the names of different chemicals found in tobacco and cigarette smoke. One more option is to have students calculate the amount of money spent over a lifetime of smoking.

The teacher notes page provides an extra paragraph of information to help guide the lesson and remind you what to focus on. It emphasizes that students understand that just because people use tobacco, it does not make them bad. The lesson should highlight tobacco’s negative effects on a person’s health. The blank lines on this page are available for you to write out thoughts and ideas you have as you prepare the lesson.

The Tobacco Is a Drug lesson plan has three pages of content. Students will first learn that tobacco is a plant that people use mostly for its leaves. Tobacco is a drug because a drug is a chemical that changes the way a person’s body works. It contains several harmful chemicals, such as nicotine, which can lead to addiction. These substances change the way a person’s body works, making tobacco a drug.

There are many drugs that are beneficial for the body and that yield positive changes. However, tobacco is not beneficial to the body and only produces negative effects. Some people claim that smoking a cigarette keeps them calm, but that effect is only temporary. There are many other ways or things to do to help a person relax that don’t have negative side effects.

In addition, there are several ways people can use tobacco. They can smoke it in cigarettes, cigars, bidis, and kreteks. They can also smoke loose tobacco in a pipe or hookah (a water pipe). Some people use e-cigarettes or e-vaporizers, often called vaping. This method delivers nicotine with flavorings and other chemicals to the lungs in the form of vapor instead of smoke. People can also chew tobacco in products like chewing tobacco, snuff, and dip.

Because of the nicotine and other chemicals in tobacco, using tobacco products becomes very addictive for most people. They generally find it extremely difficult to quit once they begin using any of the different tobacco products. In fact, 90% of all adult smokers started smoking when they were kids. And unfortunately, over 3,400 teens begin smoking cigarettes every day. About 25% of them will eventually become addicted and smoke daily.

Using tobacco yields no positive health benefits. The nicotine in tobacco can be as addictive as cocaine or heroin. Once a person starts smoking, it can be extremely hard to stop. Every system of the body can be harmed as well. Some health issues related to smoking include heart disease, stroke, and emphysema, which is a condition in which the lung tissue starts to break down.

It can also lead to many types of cancer, including lung, throat, stomach, and bladder cancer. Additionally, bronchitis and pneumonia can also link to tobacco use. The immediate side effects using tobacco include increased blood pressure, throat irritation, bad breath, and damage to the airways. Chewing tobacco itself has its own set of bad effects.

Apart from causing bad breath and staining a person’s teeth, chewing tobacco also causes mouth sores. The gums begin to recede and cause teeth to start falling out. Both the lips and gums can crack and bleed. The heart can experience irregular beat patterns that lead to a stroke or brain damage. And a person could contract cancer of the mouth, lips, cheeks, gums, and so on.

When a person tries to quit smoking or chewing tobacco, they often suffer from withdrawal symptoms. These include irritability, problems focusing, sleeping problems, increased appetite, and continued cravings for tobacco. Many people gain weight once they quit smoking partially because of these symptoms. The best way to avoid withdrawal is to decide never to use tobacco in the first place.

Because it is legal to use tobacco products, most people will never be able to avoid it entirely. In fact, secondhand smoke from cigarettes or cigars contain more than 4,000 chemicals. Anyone often in the presence of a smoker is at risk of cancer and heart disease too.

At some point, it’s fairly likely that any young person will be faced with the decision to smoke or not smoke. Sometimes it could be easy to simply decline a cigarette when someone offers it. However, peer pressure is a powerful thing, and the decision to stay away from cigarettes might not be so easy to make.

The lesson provides a list of different things students could say or do when faced with this decision. For instance, they could make up an excuse or be more blunt, saying that they don’t want to start the habit. They could also choose to walk away. If the person offering them a cigarette is a friend, it’s very possible they would need a new friend.

The Tobacco Is a Drug lesson plan includes three worksheets: an activity worksheet, a practice worksheet, and a homework assignment. Each one will help students solidify their grasp of the material they learned throughout the lesson. You can refer to the classroom procedure guidelines to know when to hand out each worksheet.

Students will read through a list of negative effects that tobacco can have on a person. There are 20 effects in total, and students must rank them by worst effect (1) to least worst effect (20). It could be fun to put students in small groups to have friendly debates about their choices. Or you could discuss as a class what students chose for the worst and the least worst negative effects of tobacco use.

TOBACCO IS A DRUG PRACTICE WORKSHEET

The practice worksheet splits into three sections. On the first section, students will mark whether each of 10 statements is true (T) or false (F). Then the next section requires them to change each false statement into a true one using the lined provided. Finally, students will place an X next to each negative effect related to using tobacco. This last section contains eight possibilities.

REVIEW OF THE FACTS HOMEWORK ASSIGNMENT

Like the practice worksheet, the homework assignment divides into three section. First, students will match definitions to the correct terms from the word bank. There are five definitions and terms to match. The next section requires students to answer five questions about cigarettes and e-cigarettes. For the finals section, students will answer questions about cigarettes and chewing tobacco based on their prices.

There are answer keys at the end of the lesson document for the practice and homework worksheets. The correct answers are in red to make it easier to compare them to your students’ responses. Because some of the prompts are objects, there may be some variation in students’ answers. If you choose to administer the lesson pages to your students via PDF, you will need to save a new file that omits these pages. Otherwise, you can simply print out the applicable pages and keep these as reference for yourself when grading assignments.