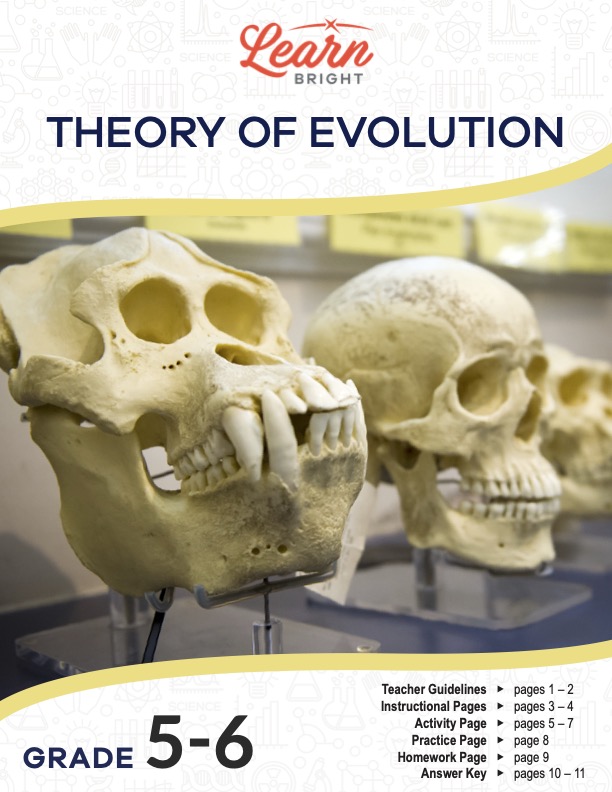 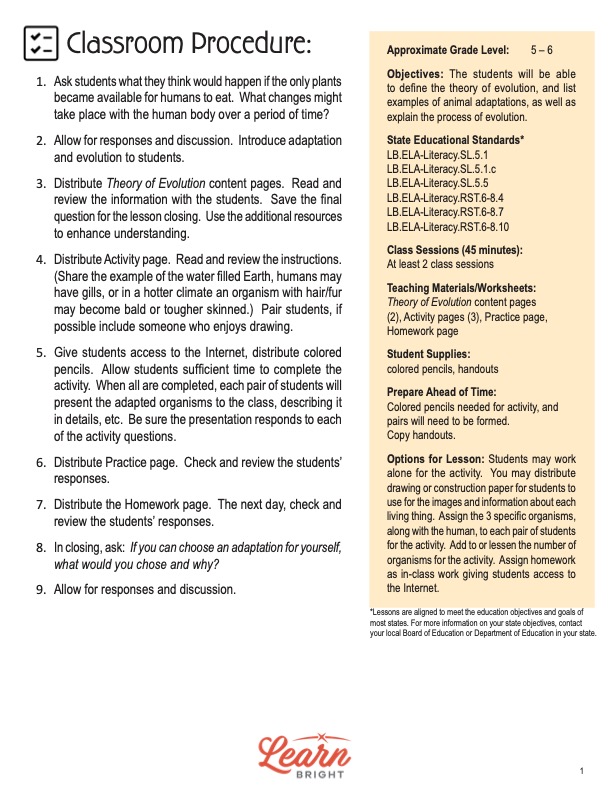 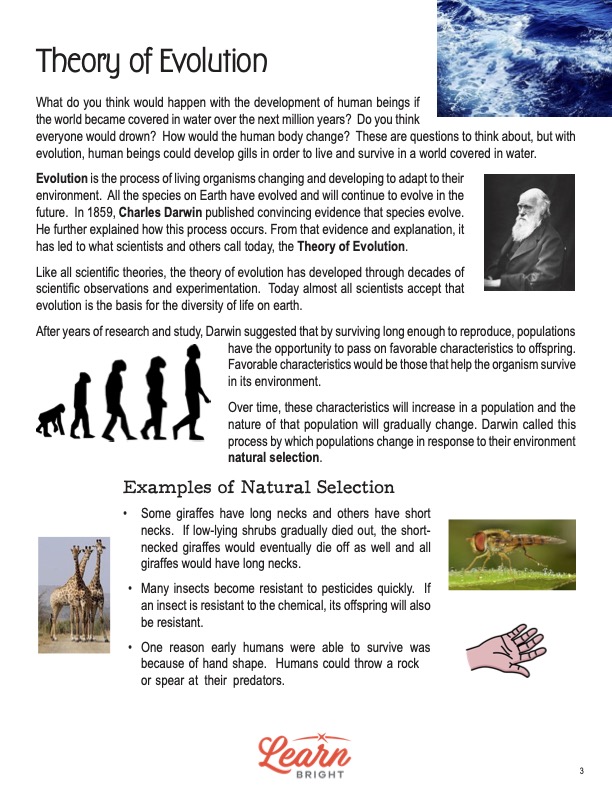 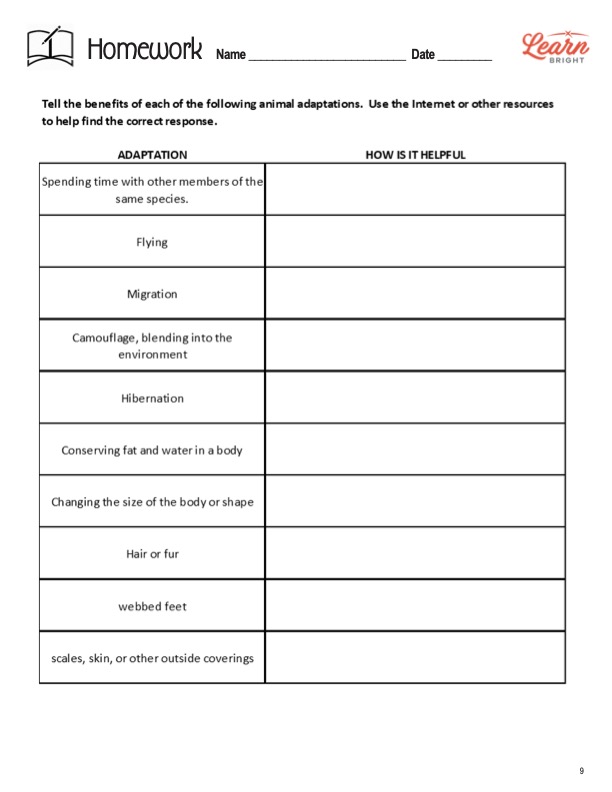 Theory of Evolution describes the idea that plants and animals have adapted and changed throughout long periods of time. Students will learn how to explain the theory and evolution process to others. They will also look at examples of animal adaptaions.

There are several suggestions in the “Options for Lesson” section of the classroom procedure page that you could incorporate into the lesson. Most of them specifically relate to the activity. For example, instead of pairs, students could work alone. You could also change the number of animals they have to research.

What our Theory of Evolution lesson plan includes

Lesson Objectives and Overview: Theory of Evolution introduces students to this important concept for the development of plant and animal species throughout time. Students will discover examples of animals that have adapted to a changing environment over long periods. They will also be able to describe the theory and process of evolution. This lesson is for students in 5th grade and 6th grade.

Every lesson plan provides you with a classroom procedure page that outlines a step-by-step guide to follow. You do not have to follow the guide exactly. The guide helps you organize the lesson and details when to hand out worksheets. It also lists information in the yellow box that you might find useful. You will find the lesson objectives, state standards, and number of class sessions the lesson should take to complete in this area. In addition, it describes the supplies you will need as well as what and how you need to prepare beforehand. This lesson just requires colored pencils for the activity portion.

The “Options for Lesson” section of the classroom procedure page outlines some additional activities and variations that you can use when presenting this lesson to your students. Most of these suggestions have to do with the activity specifically. Students could work alone rather than in pairs. You could also distribute drawing or construction paper for students to use for both the images and the information about each living thing. Assign the three specific organisms, along with the human, to each pair of students. You could add to or subtract from the number of organisms students have to draw and write about. Another option is to assign the homework as in-class assignment, giving students access to the internet.

The teacher notes page provides an extra paragraph of information to help guide the lesson and remind you what to focus on. It reminds you that this topic could be controversial for some students depending on their religious beliefs. However, a calm and friendly debate between the two sides could be a worthwhile exercise to add to the lesson. The blank lines on this page are available for you to write out thoughts and ideas you have as you prepare the lesson.

The Theory of Evolution lesson plan contains two pages of content. To start off, it asks students what they think would happen to human development if water covered the earth for the next million years. Would everyone drown or would the human body change? When it comes to evolution, perhaps human beings could develop gills so they could live and survive under water.

Evolution is the process through which living organisms change and develop to adapt to their environment. Every species on Earth has evolved and will continue to evolve in the future. In 1859, Charles Darwin published convincing evidence that species do evolve and explained how the process occurs. His findings led to what scientists and others today call the theory of evolution.

Like all theories, this one has developed through decades of scientific observations and experiments. Today, almost all scientists accept that evolution is the basis for the diversity of life on Earth. Darwin suggested that by surviving long enough to reproduce, populations have the opportunity to pass on favorable traits to their offspring.

At the bottom of the first content page are three specific examples of the concept of natural selection. Some giraffes, for instance, have long necks while others have shorter necks. If low-lying shrubs gradually died out, the short-necked giraffes would eventually die off as well. Then all giraffes would have long necks.

Many insects become resistant to pesticides fairly quickly. If an insect is resistant to the chemical, its offspring will also be resistant. Finally, one reason early humans survived long ago was due to the shape of their hands. Humans could throw a rock or spear at prey.

Darwin also determined that organisms differ from place to place because their habitats present different challenges to survival or reproduction. As a result, each species as evolved in response to their specific environment. This process is what we call adaption or adaptation.

As an example, seagulls normally live near the sea, but many have adapted to living in the city or landfills because that’s where they have found food. And if the earth really did become covered in water, and human beings developed gills, that would be another example of an adaptation to survive the environment.

One main conclusion of Darwin was that in any population, individuals that were best suited to survive and do well in their environment would produce the most offspring. By doing so, the traits of that offspring would pass on and become more common as each new generation arrived.

Traits are the genetic characteristics that determine physical and behavioral attributes. Scientists now know that genes are responsible for the traits we inherit. Certain forms of a trait become more common because more of the species carry the gene for that trait. In other words, natural selection causes the frequency of genes in a population to increase or decrease over time.

Today, Darwin’s theory of evolution is almost universally accepted by scientists as the best available explanation for the biological diversity on Earth. Most scientists agree on three points. First, the earth is about 4.5 billion years old. They agree that organisms have inhabited the earth for most of its history. And finally, they also agree that all organisms living today evolved from earlier, simpler life forms.

The Theory of Evolution lesson plan includes three worksheets: an activity worksheet, a practice worksheet, and a homework assignment. Each one will reinforce students’ comprehension of lesson material in different ways and help them demonstrate when they learned. Use the guidelines on the classroom procedure page to determine when to distribute each worksheet to the class.

For the activity, students will imagine that the earth is either much warmer is much cooler than it is now. They will also imagine at least four organisms (including humans) live in this world. The worksheet lists seven questions about what life would be like for these organisms. How will their bodies change? Will their diets change? How will they look?

Next, students will use the four tables on the worksheet pages to fill out the answers to these questions. If they choose to describe more than four organisms, you can print off extra pages of the tables. Students will describe each organism in the left box of the table and draw a picture of it in the box on the right.

There are two sections on the practice worksheet. The first section requires students to match definitions to the correct terms. There is a total of 10 statements and terms in the word bank to match. For the next section, students will fill the blanks on 15 sentences. Again, there is a word bank with the terms they can choose from.

For the homework assignment, students will look at a list of animal adaptations, such as migration, webbed feet, and camouflage. Using the internet or other sources, they will research information on animals that exhibit these adaptations to determine how the change is helpful. They will write what they discover in the boxes to the right of each adaptation.

You will find answer keys for both the practice and homework worksheets at the end of the lesson document. All the correct answers are in red to make it easier to compare them with studnets’ work. There may be some variation in students’ responses on the homework. However, the answer key for that worksheet provides a great guideline to follow as you grade. If you choose to administer the lesson pages to your students via PDF, you will need to save a new file that omits these pages. Otherwise, you can simply print out the applicable pages and keep these as reference for yourself when grading assignments.

I have found countless lessons that I can use with my students that range in all abilities. I have mainly been using the history lessons that are available and they allow me to teach different things that I wasn't able to before with the limited resources at schools these days.