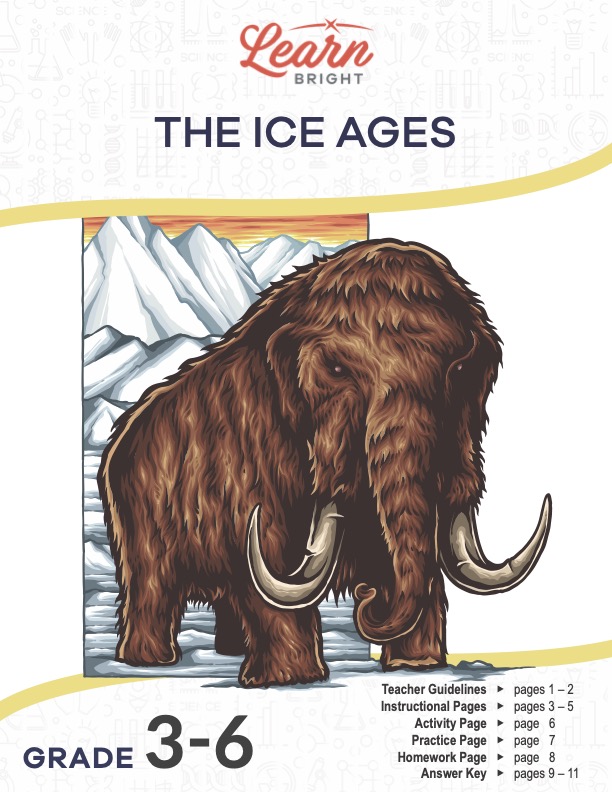 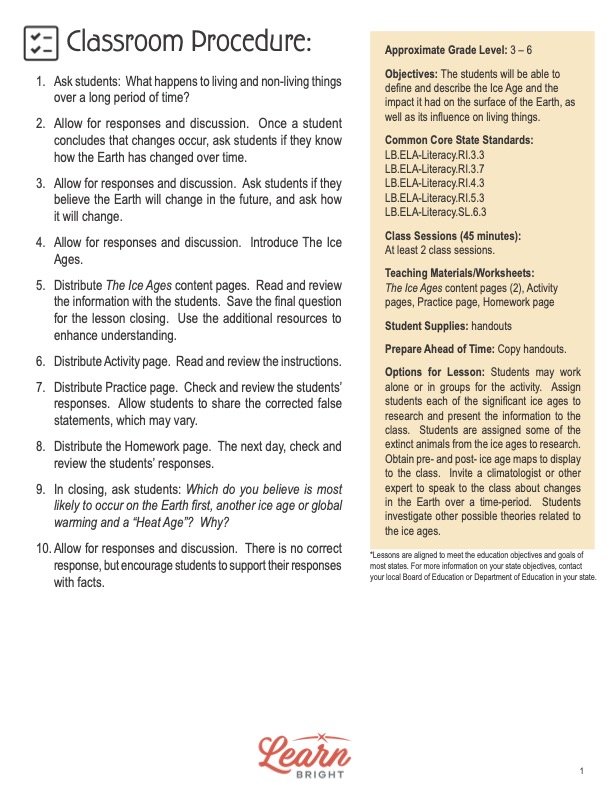 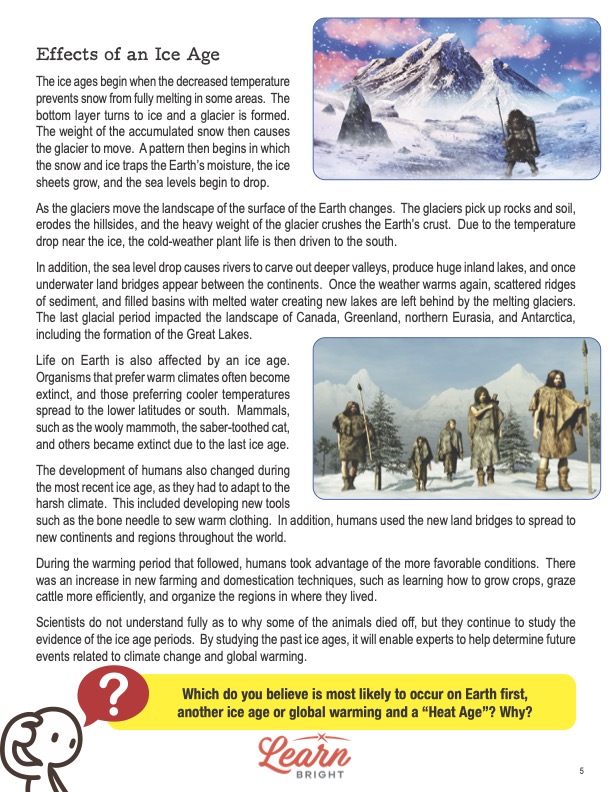 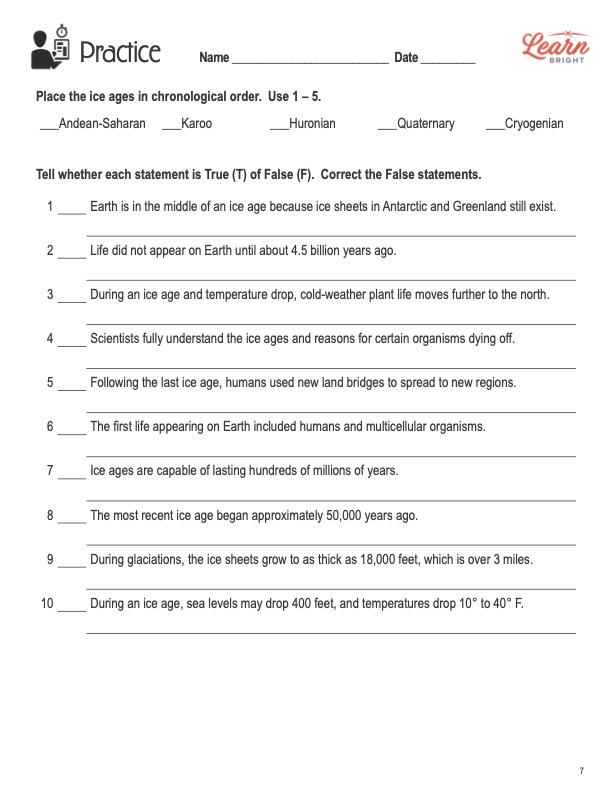 Ice Ages explores what the earth was like during these cold periods of its history. Students will learn about the five significant periods and what occurred during those times. They will also discover how such periods impacted and influenced the future of the earth.

Lesson Objectives and Overview: Ice Ages explores the causes and effects of these cold periods in Earth’s history. Students will discover some of the characteristics that define these times. They will also learn about the lasting influence they had on living things. This lesson is for students in 3rd grade, 4th grade, 5th grade, and 6th grade.

There are several suggestions in the “Options for Lesson” section that you could incorporate into the lesson plan if you want to. One optional addition is to assign students a significant ice age to research and present to the class. Students could also research extinct animals from these periods. Another option is to obtain maps that display the Earth both before and after the ice ages occurred. You could invite a climatologist or other expert to speak to the class about how Earth changes over a period of time. One more idea is to let students investigate other possible theories that relate to the ice ages.

The teacher notes page provides an extra paragraph of information to help guide the lesson. It suggests you focus on helping students understand the implications and influences that these times had on the Earth and its inhabitants. In addition, it mentions teaching this lesson in conjunction with others about Earth’s history, glaciers, or the environment. You can use the blank lines to write down any other ideas or thoughts you have about the topic as you prepare.

The Ice Ages lesson plan contains three content pages. The lesson starts off by explaining how people change over their lifetime in various ways. Students will discover that the Earth behaves in much the same way. It has changed throughout its existence and will continue to do so in the future. These changes just aren’t as noticeable as the ones we experience as we age.

Earth has not always appeared the way it does today, with people, parks, buildings, and many other things. Life did not appear on Earth until about 3.8 billion years ago, and only included one-celled organisms. As time passed, the Earth changed, new life began to form, and the climate changed. Our planet went through periods of heat, cold, and other temperature changes.

When the Earth’s global temperatures decrease overall, the ice on the polar caps expands a lot. During these periods, which we call ice ages, land in North America and Northern Europe consisted of giant sheets of ice and glaciers. Ice ages can last hundreds of millions of years. There have been at least five significant ice ages in Earth’s history.

During these cold periods, living things on the Earth may change. Some may die out completely while others adapt and survive. These periods occur between regular, warmer interglacial intervals. Currently, the Earth is in the middle of an ice age because ice sheets in the Antarctic and Greenland still exist despite moderate global temperatures.

Over the past million years or so, about twelve major glaciations have occurred. The most recent, which happened about 18,000 years ago, is often referred to as the Ice Age. A glaciation happens when ice sheets grow to as thick as 12,000 feet—over 2 miles! During these times, the ice sheets spread across Canada, Scandinavia, Russia, and South America. The temperatures across the Earth decreased to between 10°F and 40°F. The Gulf Coast states were like the northern states and Canada, lined with pine forests and prairie grasses.

Several things can influence an ice age, such as the Earth’s orbit around the sun or low cycles of energy output from the sun. Changes in the atmosphere, like low levels of greenhouse gases and ocean current changes, can also have an effect. A decrease in volcanic activity may influence an ice age as well.

Effects of an Ice Age

An ice age starts when decreased temperatures prevent snow from melting fully in certain areas. The bottom layer turns to ice and eventually forms a glacier. Weight from accumulated snow causes the glacier to move. This starts a pattern in which the snow and ice trap the Earth’s moisture. Ice sheets grow, and the sea levels begin to drop.

The movement of glaciers causes changes across the landscape of the Earth’s surface. Glaciers can pick up rocks and soil and erode hillsides. Their heavy weight can crush the Earth’s crust. The drop in sea level causes rivers to carve out deeper valleys and produce huge inland lakes. Land bridges that used to be under water appear between continents.

Students will learn that once the weather warms up again, a few things happen. The melting glaciers leave behind scattered ridges of sediment and basins of melted water, which become lakes. The last glacial period impacted the landscapes of Canada, Greenland, northern Eurasia, and Antarctica. This period also brought with it the formation of the Great Lakes.

Ice ages affect life on Earth as well, not just the Earth’s landscape. Organisms that prefer warm climates often become extinct during an ice age. Those that prefer cooler temperatures spread to the lower latitudes or further south. Mammals like woolly mammoths and saber-toothed tigers became extinct during the last ice age.

The development of humans also changed during the most recent ice age because they had to adapt to the harsh climate. People had to create new tools, like the bone needle to sew warm clothing. They were able to use the new bridges to spread to new continents and regions all over the world.

During the warming period that followed this ice age, people took advantage of the better conditions. They developed new farming and domestication techniques. They learned how to grow crops, graze cattle more efficiently, and organize the regions in which they lived.

Scientists don’t fully understand why some animals died off during the ice ages, but they continue to study the evidence they find involving past ice age periods. By studying the past, they will be more able to determine future events related to climate change and global warming.

The Ice Ages lesson plan includes three worksheets: an activity worksheet, a practice worksheet, and a homework assignment. They will reinforce students’ understanding of the lesson content and allow them to demonstrate what they learned in different ways. The guide on the classroom procedure page outlines when to hand out each worksheet throughout the lesson.

With a partner, students will imagine they survived an ice age thousands of years ago. They have adapted to the cold temperatures and sewn clothes to keep themselves warm. However, they have learned that the Earth is becoming warmer, and the area they live in will have dramatically higher temperatures. They now have to adapt to the heat that they will encounter in five years. The worksheet lists five questions. Students must discuss with their partners each question and respond accordingly.

The practice worksheet is split into two sections. For the first section, students will place the five ice ages in chronological order. The second part requires them to tell whether each of 10 statements is true (T) or false (F). For any false statements, students must rewrite the sentences to make them true.

Like the practice worksheet, there are two sections of the homework assignment. The first part lists 15 questions or prompts for students to respond to. The second part requires students to explain how five different things can influence an ice age.

The last few pages of the lesson plan PDF are answer keys for the three worksheets. The correct answers are in red to make it easy to compare them to students’ responses. Given the nature of some of the questions, there may be some variation. If you choose to administer the lesson pages to your students via PDF, you will need to save a new file that omits these pages. Otherwise, you can simply print out the applicable pages and keep these as reference for yourself when grading assignments.

The work sheets were very helpful!

I have looked over the materials and the noted resources and am eager to use this lesson in my classroom. It is full of great information and is very user friendly. Thank you!!