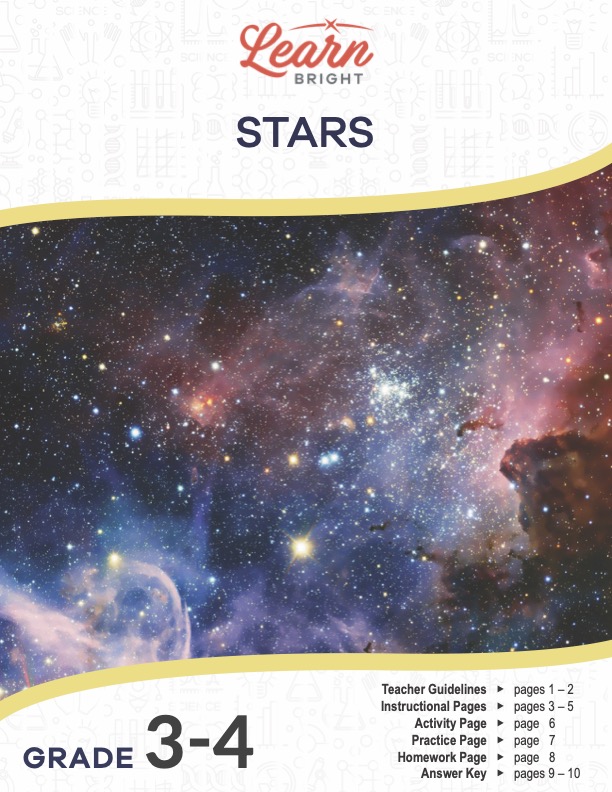 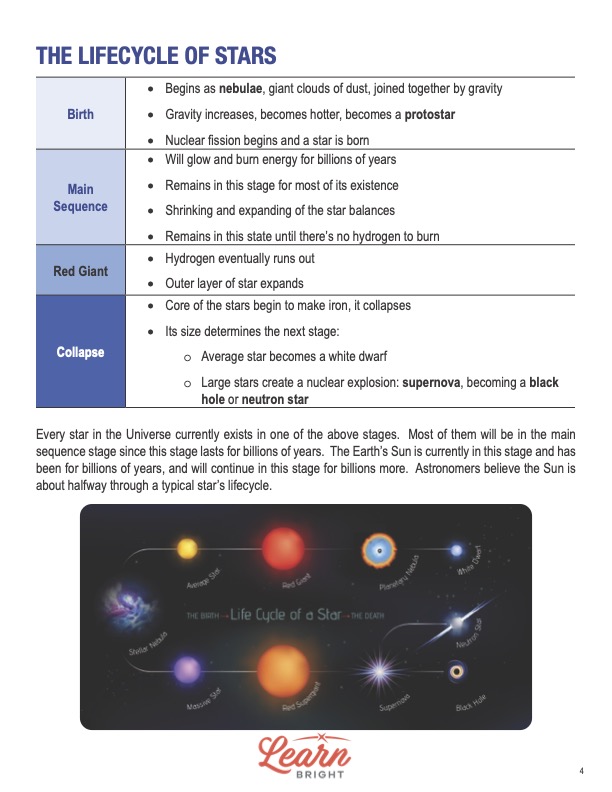 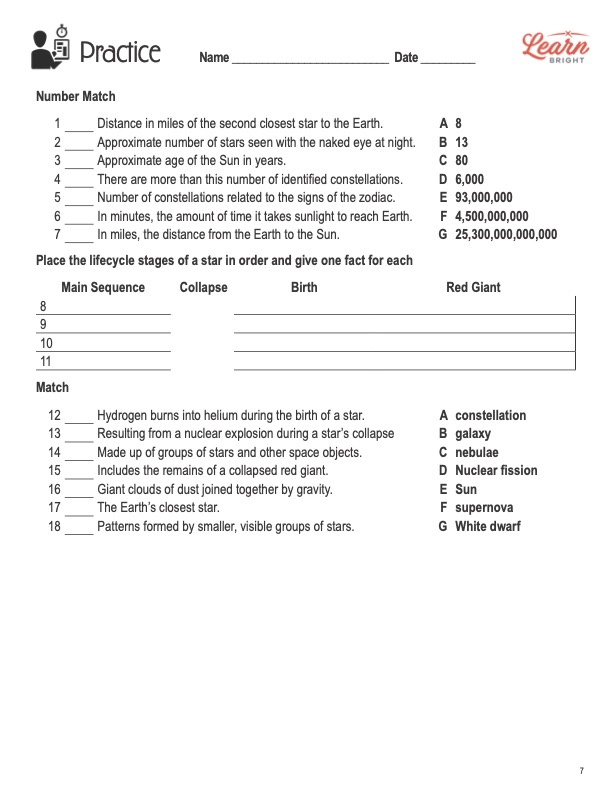 Stars introduces students to the billions of suns throughout the universe. Students will discover that there are many different types of stars and that they all go through a cycle of life. They will also learn about constellations and how scientists classify these burning balls of helium and hydrogen.

This lesson’s “Options for Lesson” section is full of suggestions for additional ideas and activities. One option is to have students cut out big stars from construction paper or poster board that they can design and decorate for display in your classroom.

What our Stars lesson plan includes

Lesson Objectives and Overview: Stars explores the various types of stars in the universe and their lifecycle. Students will discover how scientists categorize and classify the universe’s suns and define certain smaller groups into constellations. They will also learn about some of the elements that comprise a star and how nuclear fission works. This lesson is for students in 3rd grade and 4th grade.

You will find quite a few suggestions in the “Options for Lesson” section of the classroom procedure page that you could incorporate into the lesson plan. A couple relate specifically to the activity. Students could work by themselves or in small groups rather than with a partner. Instead of writing the stories down, students could perform a mini-play for the class. Another option is to plan a field trip to a planetarium, or invite a local astronomer or astronomy expert to speak to the class and answer questions. Students could create a picture book that displays the lifecycle of stars. For the lesson opening, prepare some glow-in-the-dark stars inside a box or other location. One more idea is to have students cut out a big star to design and decorate for display in the classroom.

The teacher notes page provides an extra paragraph of information to help guide the lesson and remind you what to focus on. It suggests you teach this lesson around the same time as others about space, the sun, galaxies, and so on. The blank lines on this page are available for you to write out thoughts and ideas you have as you prepare the lesson.

The Stars lesson plan contains three pages of content. The lesson begins by describing the sun. Every day, the “most popular star” in the universe appears in the eastern part of the sky as it starts to rise. The sun is one of about 6,000 visible stars, but it is the closest one to Earth. Clouds cannot fully block the sun’s intense brightness and energy.

While the sun seems fairly big in the sky, it is actually 93,000,000 miles away from Earth, and is way bigger than it appears. That distance may seem very far, but it really isn’t when compared to the billions of other stars in the universe. In fact, the next closest star to Earth is 25,300,000,000,000 miles—or 25 trillion, 300 billion miles—away from our planet! Because the sun is so close to Earth, and because it’s part of our solar system, scientists study it the most out of all the stars. They believe the sun is 4.5 billion years old.

Students will learn that astronomers are the scientists who specialize in studying outer space. Astronomers believe there are more stars in the universe than there are grains of sand on the beaches throughout the world. That says a lot considering how much sand there is on one small area of just one small beach.

There are a few traits that almost all stars have in common. First, they mostly consist of two gases: hydrogen and helium. Next, hydrogen burns into helium (nuclear fission), causing the stars to become extremely hot and shine brightly as they burn. Third, they have a life cycle, which the lesson discusses more in detail on the next page. And finally, air movement in the earth’s atmosphere causes light to bend and stars to twinkle.

In total, there are four steps in a star’s life cycle: birth, main sequence, red giant, collapse. During the birth phase, stars begin as nebulae, which are giant clouds of dust, that join together by gravity. As gravity increases, it becomes hotter and changes into a protostar. The process of nuclear fission begins, and a star is born!

During the main sequence, the burning ball of gas will glow and burn energy for billions of years. It will remain in this stage for the majority of its existence. In addition, it begins to balance the shrinking and expanding. Once all the hydrogen gas runs out, it turns into a red giant. At this stage, the outer layer expands, leading to the final stage. When a star collapses, its core starts to produce iron. The star’s overall size determines the next stage. An average star becomes a white dwarf while larger ones create a nuclear explosion and resulting supernova. The supernova becomes a black hole or a neutron star.

Every star in our universe exists in one of these four stages. The majority of them are in the main sequence phase since that one lasts so long and takes up the majority of their life cycle. This is the stage that the sun is in currently, and it has been for billions of years already. Naturally, it will continue in this stage for billions more. Astronomers believe the sun is about halfway through a typical star’s lifecycle.

Students will learn that they can identify the stage a star is in by color, which then puts it in one of three categories: dwarfs, giants, neutrons. Dwarfs are smaller and most likely red or yellow. They give off little light. A brown dwarf never gets large enough for nuclear fission to occur. White dwarfs are the remains of a collapsed giant. Giants are usually main sequence stars, sometimes called blue giants. Red giants form when hydrogen runs out. Some giants are as large as our entire solar system. Finally, neutrons are collapsed giants. These are very tiny and very dense.

In one galaxy, there are billions of stars. A galaxy is basically a group of stars and other space objects, like planets, asteroids, moons, and so on. Galaxies spin around a center of gravity just as planets revolve around the sun. Of course, the distance is much greater for galaxies. Astronomers believe there are billions of galaxies in the universe, each with trillions of stars. Earth and our solar system are part of the Milky Way galaxy.

Smaller groups of stars create patterns that we call constellations. These patterns are visible from the earth. They take the shape of different objects, like animals, mythical creatures, and things like compasses or crowns. There are more than 80 constellations to observe in our night sky. Famous ones include Orion, Ursa Major and Ursa Minor, Pegasus, and many others.

The 13 names for the signs of the zodiac are all constellations as well: Pisces, Aquarius, Gemini, Cancer, Libra, and so on. Ancient civilizations used constellations to help them in their travels, for tracking seasons, and as a calendar. (This would be a great time to ask students to find their zodiac sign on a constellation map of some kind.)

The Stars lesson plan includes three worksheets: an activity worksheet, a practice worksheet, and a homework assignment. Each one will help students solidify their grasp of the material they learned throughout the lesson. You can refer to the classroom procedure guidelines to know when to hand out each worksheet.

For the activity, students will work with a partner to write a story about the life of two stars. They should be creative but must include accurate information about stars throughout the story. Each story should contain as least two characters or “friends” with names and personalities. The worksheet lists a series of questions for students to consider as they approach the assignment. For instance, which galaxy were the characters “born” in? Will the characters go through all four life cycle stages? How far away from Earth as these star characters located? Students should brainstorm their ideas and create a rough draft. Once they check for spelling and other conventions, they can complete a final draft, which they will later read to the class.

The practice worksheet divides into three sections. First, students must read seven descriptions and decide which number option matches the descriptions as they relate to the topic. The next section requires students to place the life cycle stages in order and provide one fact about each one. Finally, students will match definitions to their correct terms. There is a total of seven definitions and terms to match in this section.

REVIEW OF THE FACTS HOMEWORK ASSIGNMENT

The last worksheet is a homework assignment that requires students to respond to 16 questions or prompts. You can decide whether or not you allow students to refer to the content pages for help in completing this assignment. You may also choose to use this or the practice worksheet as a quiz.

The last two pages of the PDF are answer keys for the both the practice and homework worksheets. All the correct answers are in red to make it easy to compare them to students’ responses. For the most part, students’ work should mirror the answer keys, but there will be some variation at times given the nature of some of the prompts or questions. If you choose to administer the lesson pages to your students via PDF, you will need to save a new file that omits these pages. Otherwise, you can simply print out the applicable pages and keep these as reference for yourself when grading assignments.

Great supplement for the lesson!

This was an amazing find for the lesson I was trying to help my students understand. Great supplement!