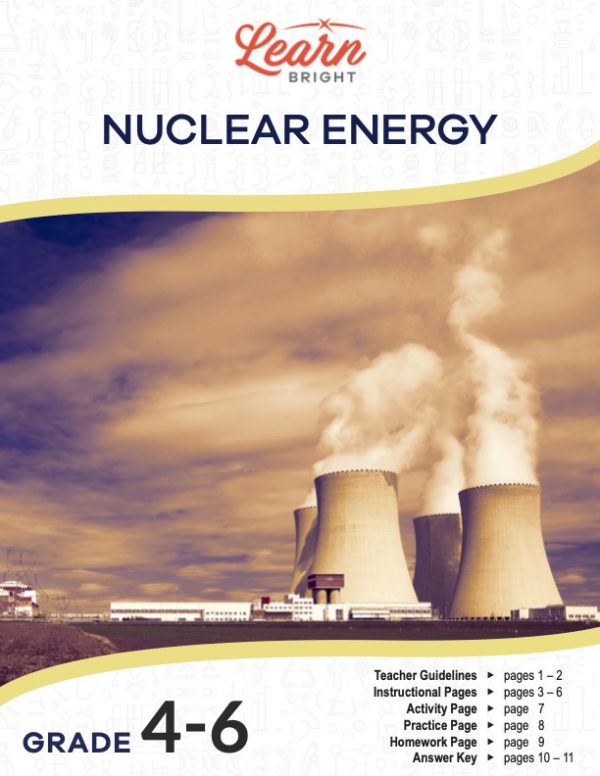 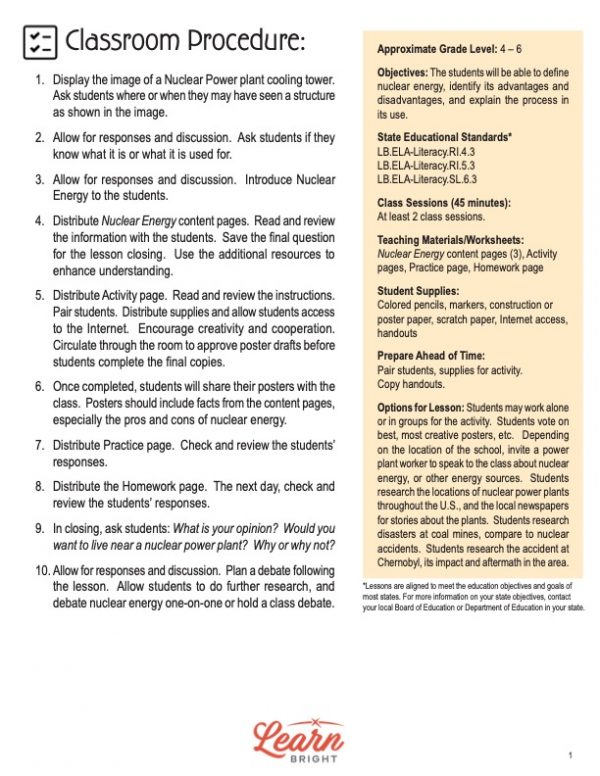 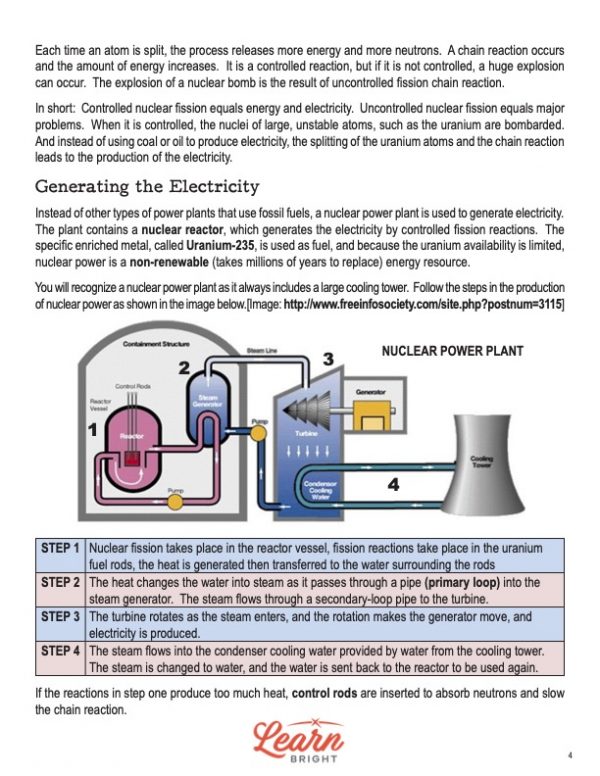 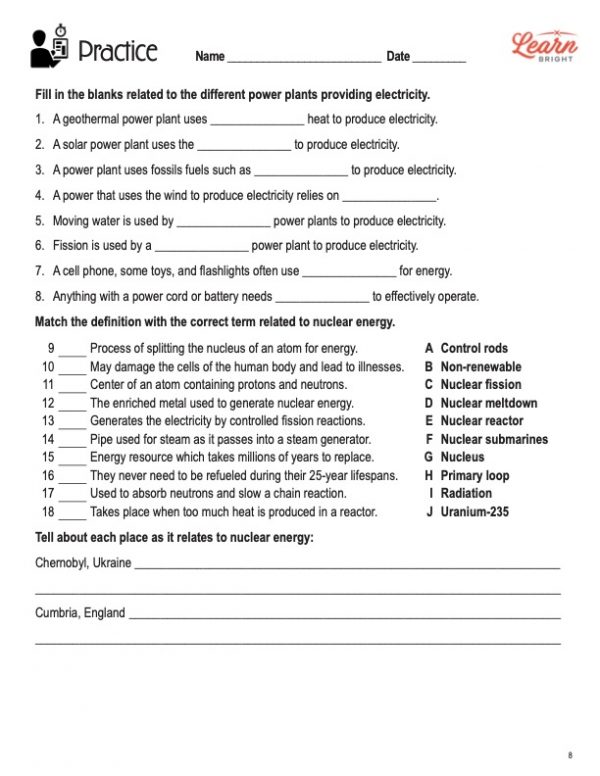 Nuclear Energy introduces students to this type of energy as a source of power. Students will learn about the sources for this kind of power and what people can use it for. They will also be able to explain the process of how to use nuclear energy.

There are a number of suggestions in the “Options for Lesson” section that you might want to take advantage of if you want. One option is to invite someone who works at a power plant (depending on where your school is) to speak to the class and answer questions they have about nuclear energy.

Lesson Objectives and Overview: Nuclear Energy teaches students about this type of power source and its effects on the world. Students will learn about the advantages and disadvantages of using this kind of power. By the end of the lesson, they will be able to explain the process by which people are able to use nuclear energy. This lesson is for students in 4th grade, 5th grade, and 6th grade.

Every lesson plan provides you with a classroom procedure page that outlines a step-by-step guide to follow. You do not have to follow the guide exactly. The guide helps you organize the lesson and details when to hand out worksheets. It also lists information in the yellow box that you might find useful. You will find the lesson objectives, state standards, and number of class sessions the lesson should take to complete in this area. In addition, it describes the supplies you will need as well as what and how you need to prepare beforehand. For this lesson, you will need colored pencils, markers, construction paper or poster boards, and scratch paper. Students will also need internet access for research purposes.

In the “Options for Lesson” section of the classroom procedure page, you will find several ideas for additional activities or tasks to incorporate into the lesson. For the activity, students could vote on the posters after everyone finishes in categories like best overall, most colorful, and most creative. Depending on where your school is, you could invite a power plant worker to speak to the class about nuclear energy and other energy sources. Students could research locations of nuclear power plants throughout the country. They could also look into local newspapers for stories about those plants. You could have students research disasters at coal mines and compare them to nuclear accidents. One final idea is for students to research Chernobyl and its impact and aftermath in the area.

The teacher notes page provides a little extra information about the lesson or guidance on how to approach it. It mentions how students may be familiar with aspects of the lesson but may not fully understand how they all relate to nuclear energy and power. You might also benefit from discussing the advantages and disadvantages of nuclear power and conduct a debate with the students. In addition, you could teach this lesson in conjunction with others about energy or related topics.

The Nuclear Energy lesson plan contains four pages of content. The beginning of the lesson discusses various sources of energy. Students will learn that a lot of the things they do every day, such as using a phone or turning on the TV, require energy. Not all things use the same source for their energy or power. Regardless, without some type of energy source, light switches, televisions, and phones would not be able to function.

Students will learn that anything with a power cord or battery needs energy to work. Where that energy comes from can differ because there are several ways energy can power homes and products. Batteries are a common one, and we find them in phones, flashlights, and certain tools like cordless drills. While batteries provide power for a certain amount of time, they have to recharge to get more energy.

Power plants also provide energy and power, and these are typically the sources of power in our homes and schools. Most power plants provide electricity using fossil fuels (oil, gas, and coal) or solar, hydroelectric, geothermal, and wind powers, as well as a few others. One of the most controversial and often forgotten sources of energy is nuclear power. Nuclear power provides about 11% of the world’s energy needs, and nearly 20% in the United States.

North America, parts of South America, Asia, and Europe use nuclear power. A very small amount is generated in Africa. As of 2016, about 31 countries generate at least some of their electricity via nuclear power. People often misunderstand nuclear energy as a source of electricity. They sometimes think of nuclear bombs or radiation, which can result in harmful consequences. However, nuclear energy has provided power for decades. One of its greatest advantages is that it can produce a lot of energy from small amounts of fuel. It also doesn’t produce pollution as fossil fuels do.

Students will next learn about nuclear power plants and how they work, which is much like other power plants except that their energy source is uranium. Uranium is a metal mined in various parts of the world. Modern nuclear plants use enriched uranium. The lesson explains that nuclear energy holds the protons and neutrons within an atom’s nucleus together. In a process called nuclear fission, the atom’s nucleus splits, and the resulting reaction drives the release of nuclear energy in power plants.

Every time an atom splits, the process releases more energy and more neutrons. It causes a chain reaction that continually increases the amount of energy. Generally, this reaction is controlled. If it is not, however, it can cause a huge explosion. A nuclear bomb explosion is the result of an uncontrolled fission chain reaction.

Nuclear power plants have nuclear reactors that generate electricity using controlled fission reactions. The specific enriched metal that they use for fuel is Uranium-235. Because the availability of uranium is limited, nuclear power is a non-renewable resource. It takes millions of years to replace this type of energy resource.

A nuclear power plant also includes a large cooling tower. The lesson shows a diagram of the various parts of the plant and lists the steps of the nuclear fission process. First, fission occurs in the reactor vessel, and reactions happen in the uranium fuel rods. This generates heat that is then transferred to the water surrounding the rods. Next, the heat converts the water into steam as it passes through a pipe into the steam generator. The steam flows through a secondary loop pipe to the turbine.

Third, the turbine rotates as the steam enters, making the generator move and produce electricity. Finally, the steam flows into the condenser cooling water that comes from water from the cooling tower. The steam returns to liquid and goes back to the reactor. If the reactions in step one produce too much heat, control rods are inserted to absorb neutrons and slow the chain reaction.

The lesson lists four main pros in favor of nuclear energy. Nuclear power plants generate electricity without producing any pollution, smoke, or carbon dioxide. It is inexpensive to produce, costing about the same as coal. In addition, it produces large amounts of energy from small amounts of fuel and produces very little waste. Nuclear power plants are also reliable.

On the other hand, the waste it does produce is radioactive. Medium to high levels of radiation damage the cells of the body. This can lead to short- and long-term illness, and eventually death. Although there is little waste, it is extremely dangerous. People have to seal and bury the waste for thousands of years so that the radioactivity can die away. Finally, while nuclear energy is reliable, costs are high for keeping the process safe. If something goes wrong, a nuclear accident can result in a major disaster.

During the 1990s, nuclear power was the fastest-growing energy source in most of the world. By 2005 it was the slowest. That change may have been the result of accidents at nuclear power plants. One of the most significant events related to nuclear energy occurred in 1986 at the Chernobyl plant in Ukraine.

Due to worker error, the plant produced too much heat, melting the fuel rods. Part of the plant exploded, and radioactive dust released into the air. The explosion killed 31 people. Thousands of other people in the area developed cancer and other illnesses from the radiation. While there have been no explosions as bad as Chernobyl, smaller ones have still concerned many people.

The Nuclear Energy lesson plan includes three worksheets: an activity worksheet, a practice worksheet, and a homework assignment. Each worksheet reinforces students’ grasp of the lesson content and helps them demonstrate what they learned. The guidelines on the classroom procedure page describe when to hand out each page to students.

FOR OR AGAINST ACTIVITY WORKSHEET

Students will work with a partner to create two posters that encourage and discourage using nuclear energy. (You can have students work alone or in groups if you prefer.) Each poster should contain a variety of elements, such as pictures, slogans, and words. Students can use the boxes at the bottom of the worksheet as scratch paper to create a rough draft before they create their final copies.

There are a few sections of the practice worksheet. The first section requires students to fill in the blanks in eight sentences. The next section requires them to match definitions to the correct terms from the word bank. There are a total of 10 statements in this section. Finally, students will describe the events in two places as they relate to nuclear energy.

For the homework assignment, students will first put nuclear power production steps in order from one to four. Next, they will mark ten statements as either pros (P) or cons (C) of using nuclear power. Finally, they will look at five numbers and write how they are significant according to what they learned in the lesson.

The final two pages of the lesson plan PDF are answer keys for the practice and homework worksheets. The correct answers are in red to make it easy to compare them to students’ work. There may be some variation on some of their answers given the nature of the questions. If you choose to administer the lesson pages to your students via PDF, you will need to save a new file that omits these pages. Otherwise, you can simply print out the applicable pages and keep these as reference for yourself when grading assignments.

I found this publication on Nuclear Energy engaging for both teacher and student in a language that treats the reader with respect, maturity and with a sense of adventure because it allows students to critically think about the issues and maintains interest with decent quality graphs and pictures.

It was explained in language that a lay person could understand but not too simplified as some of the ideas can be quite complex.

Thank you Clarendon learning for the excellent and high quality educational resources you offer!

It was a good starting point to discuss Nuclear Energy with Grade 8 Students. However, it needs to be updated , for example, by adding the Fukushima incident.