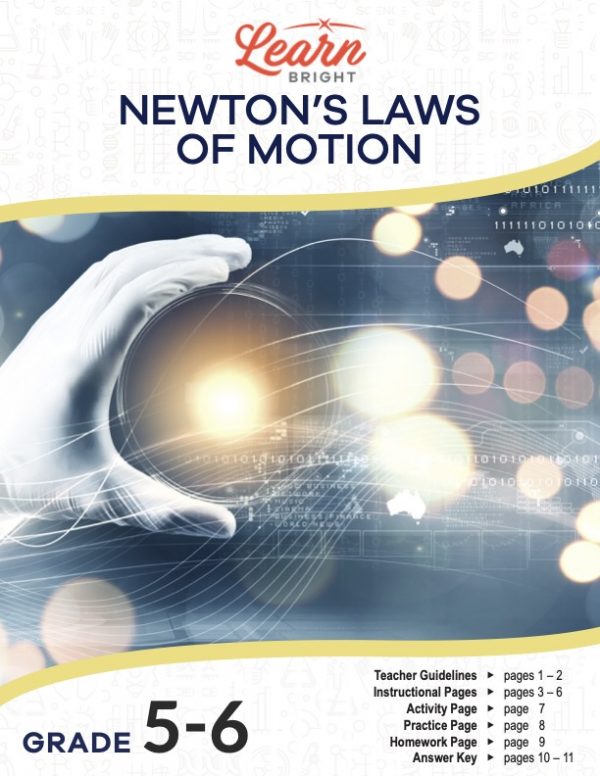 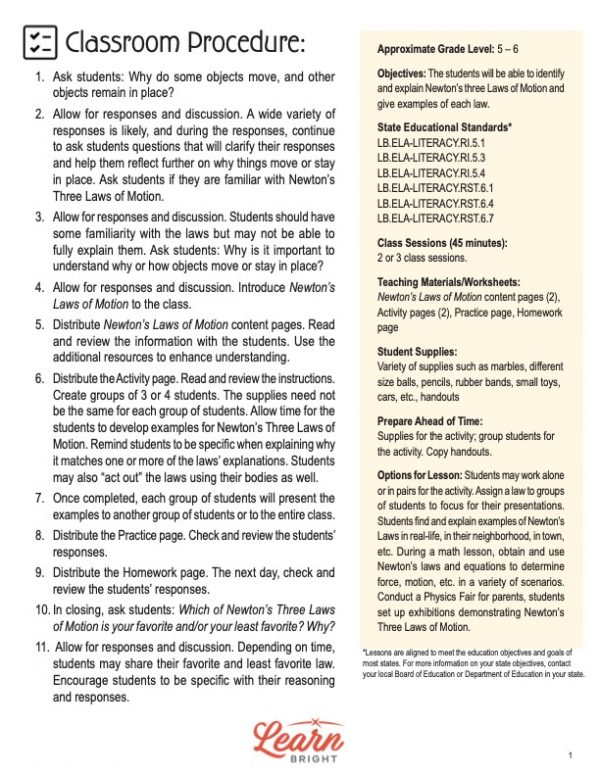 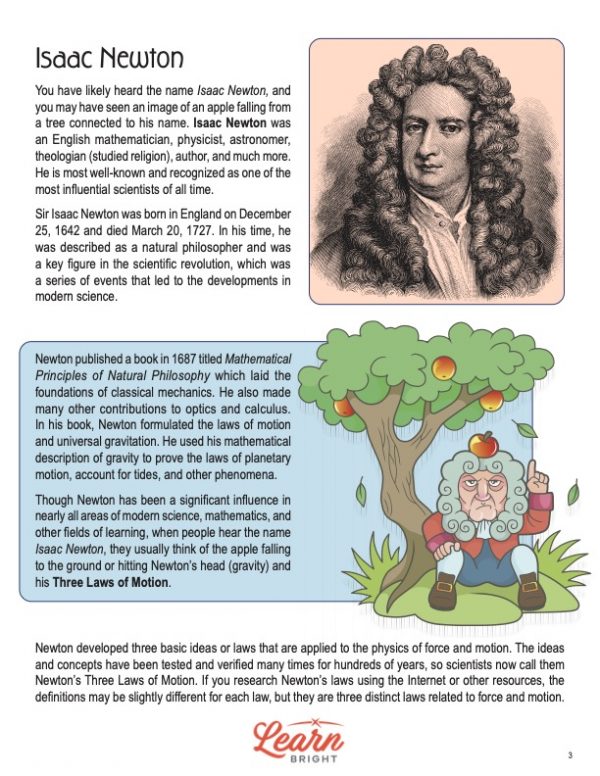 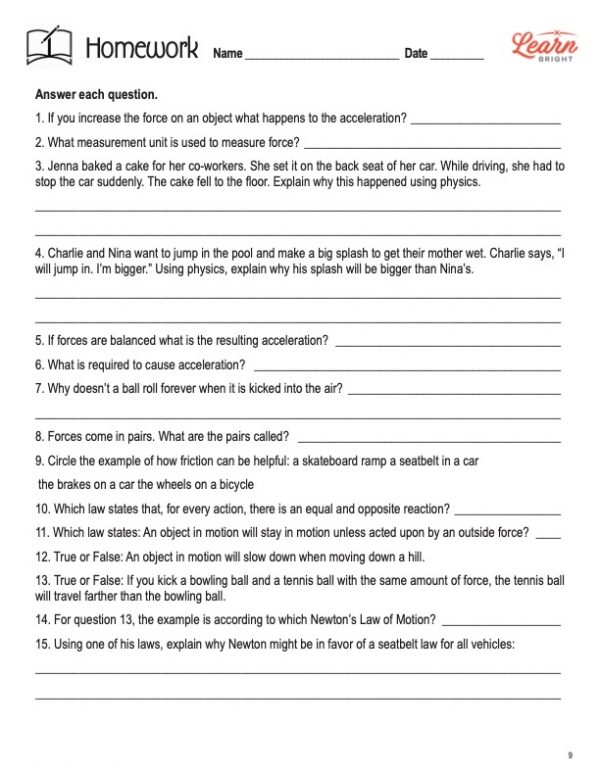 Newton’s Laws of Motion introduce students to the three famous laws that explain how motion, force, acceleration, actions, etc. work on objects. Students will learn what each law is and be able to explain them. They will also be able to provide examples that represent each law.

The “Options for Lesson” section provides several additional suggestions of things to do for the lesson. One suggestion is to group students and assign them a specific law. They can make that law the focus of their presentations. You could also have them observe examples in their neighborhoods or at home of the laws.

What our Newton’s Laws of Motion lesson plan includes

Lesson Objectives and Overview: Newton’s Laws of Motion teaches students the three laws that Sir Isaac Newton realized in the 17th century. Students will discover what each law is and be able to provide examples. By the end of the lesson, they should be able to recognize examples of each law as they observe them happening. This lesson is for students in 5th grade and 6th grade.

Every lesson plan provides you with a classroom procedure page that outlines a step-by-step guide to follow. You do not have to follow the guide exactly. The guide helps you organize the lesson and details when to hand out worksheets. It also lists information in the yellow box that you might find useful. You will find the lesson objectives, state standards, and number of class sessions the lesson should take to complete in this area. In addition, it describes the supplies you will need as well as what and how you need to prepare beforehand. For this lesson, you will need a variety of supplies, such as marbles, balls of different sizes, rubber bands, small toys, and so on. Read over the activity worksheet to figure out what other materials you might want to use.

The “Options for Lesson” section lists a number of ideas for additional tasks or activities or alternatives ways to approach aspects of the lesson. A could of these relate to the activity. Students could work alone or in pairs rather than in groups for the activity. You could assign a law to specific groups of students to focus on for their presentations. Another idea is for students to find and explain examples of Newton’s laws in real life, such as in their neighborhood, in town, at home, and so on. You could also incorporate Newton’s laws into a math lesson. One more suggestion is to conduct a physics fair for parents where students set up exhibits that demonstrate the three laws of motion.

The paragraph on the teacher notes pages describes a little more about what you can expect from this lesson plan. It mentions that students may know the three laws but may not fully understand how they apply in their everyday lives. You may benefit from teaching this lesson at the same time as others on physics. Use the blank lines to write out your ideas or thoughts as you prepare the lesson for your class.

Who Is Sir Isaac Newton?

The Newton’s Laws of Motion lesson plan contains four pages of content. The first page explains who Sir Isaac Newton is and provides some background information on him. Students will learn that he was an English mathematician, physicist, astronomer, theologian, author, and more! He is one of the most famous and influential scientists of all time. He was a natural philosopher and was a key figure in the scientific revolution. The scientific revolution was a period of events that led to developments in modern science.

When he was 45 years old, Newton published a book called Mathematical Principles of Natural Philosophy that laid the foundations of classical mechanics. In the book, he formulated the laws of motion and universal gravitation. He used his mathematical description of gravity to prove the laws of planetary motion, account for tides, and explain other phenomena. But what people most often tend to think about when someone mentions Sir Issac Newton is the apple falling from a tree and the three laws of motion.

These three laws apply to the physics of force and motion. Scientists have tested and verified the ideas and concepts many times over hundreds of years. Therefore, they now call those ideas Newton’s Three Laws of Motion. The definitions for each law varies across different resources, but the main ideas are the same.

The First Law of Motion

The first law states that an object in motion tends to stay in motion, and an object at rest tends to stay at rest, unless acted upon by an outside, unbalanced force. (You could replace the word “object” with any example to demonstrate the point. The lesson uses “body” as an example for students. If you want, students could take turns naming different objects that stay in motion or stay at rest.)

Most objects tend to naturally remain at rest and not move. For instance, if you place a book on a desk, that book will not move unless someone or something moves it. This tendency relates to an object’s inertia. Inertia is the resistance an object has to a change in its state of motion. The heavier an object is, the more inertia it will have. That is why it is harder to move a boulder than it is to move a book. Newton’s first law is also referred to as the law of inertia.

Students will learn that forces can be either balanced or unbalanced. A balanced force has zero effect on an object. Regarding the example of a book on a desk, the force of gravity on the book balances with the force of the desk holding it. Unbalanced forces imply that the net force on an object is NOT zero. The lesson provides an example of tug-of-war where both sides apply force. The team that will win is the one that applies more force than the other.

A moving object, like a ball rolling along a flat surface, will slow down and stop eventually because of friction. Friction is another type of force. If a surface has a slope, friction will still affect an object rolling down, but gravity is stronger than friction and will enable the object to keep rolling. Air resistance is yet another force that can act upon a moving object.

The Second Law of Motion

The acceleration of an object depends on its force and mass. Another way to put is that a force acting on an object will change its velocity by changing it speed, direction, or both. This is the second law of motion. An unbalanced force will accelerate an object and change its speed, direction, or both. In the tug-of-war example, adding people to one team will change that team’s force. The second law pertains to situations where the existing forces are unbalanced.

The opposite is true of mass. The more mass an object has, the less it will accelerate. If you kick a bowling ball with the same amount of force as you do a soccer ball, the bowling ball will move slower and not go as far. It requires much more force to set a bowling ball in motion than it does a soccer ball. However, the acceleration is always in the same direction as the net force.

The Third Law of Motion

Newton’s third law states that for every action, there is a reaction that is equal in magnitude and opposite in direction. More concisely stated, for every action, there is an equal and opposite reaction. This law relates specifically to the force of an object, or push or pull upon the object. It implies that there must be two objects, one pushing and the other being pushed, for instance.

The lesson explains that one can describe the reaction in terms of strength or magnitude as well as direction. The magnitude of the action equals that of the reaction. If you toss a small stone into water, it will create a small splash and a few ripples. Throwing a boulder into the water creates a larger splash and more ripples.

In these examples, the magnitude of the actions and reactions are the same, but the directions are opposite. The rocks drop down into the water while the water splashes up above the surface. To illustrate this concept further, the lesson describes firing a cannon ball. When the cannon is fired, it jumps backward when the ball projects forward. As a tribute to Newton, the unit for measuring forces using these laws is called a Newton.

The Newton’s Laws of Motion lesson plan includes three worksheets: an activity worksheet, a practice worksheet, and a homework assignment. Each worksheet will help solidify students’ grasp of the content and help them demonstrate what they learned. The guide on the classroom procedure page explains when to hand out each worksheet to the class throughout the lesson.

Students will work in small groups for the activity. You will need to prepare beforehand by collecting a number of supplies to use during the activity. Students will write out examples of each law, using the supplies, in the corresponding box on the worksheet. They will then explain how it relates to that specific law. They should have at least two examples for each law.

There are two sections for the practice worksheet. The first section lists the three laws of motion and then 10 statements. Students must decide which law the statements relate to. For the section section, they will match definitions to the correct terms. There are eight definitions and terms to match.

The homework assignment requires students to answer 15 questions as they relate to what students learned in the lesson. You may or may not choose to allow students to use the content pages for reference.

The final pages of the lesson plan are answer keys for both the practice and homework worksheets. All the correct answers are in red to make it easy to compare them to the responses from your students. There are a few questions on the homework page that may yield some variation in students’ responses. Keep that in mind as you grade. If you choose to administer the lesson pages to your students via PDF, you will need to save a new file that omits these pages. Otherwise, you can simply print out the applicable pages and keep these as reference for yourself when grading assignments.

Love them very much.