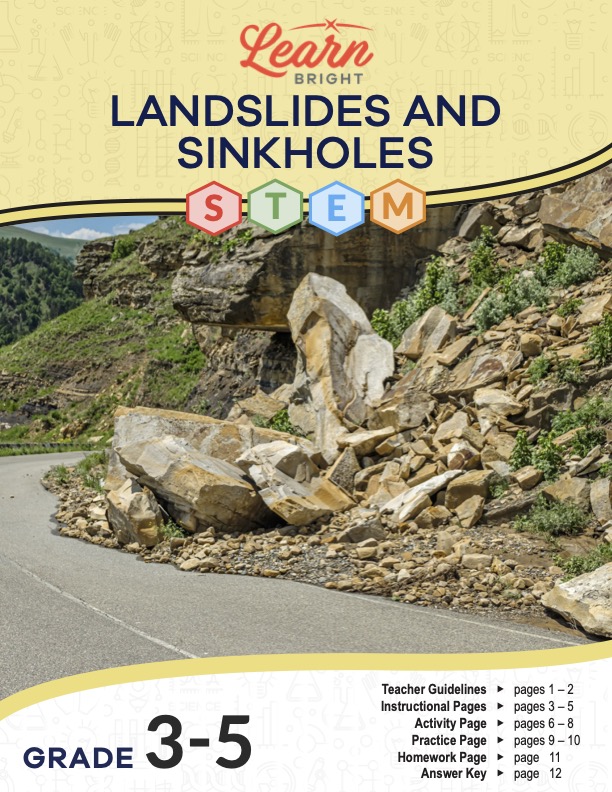 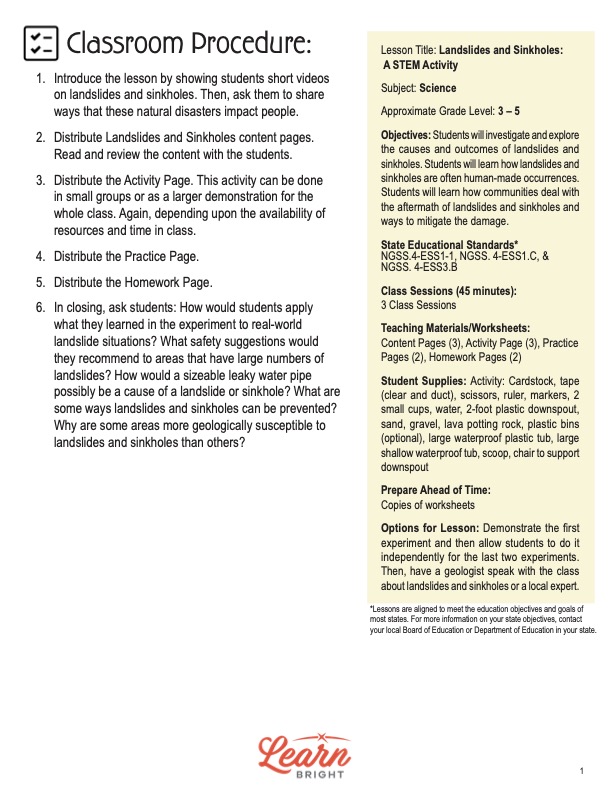 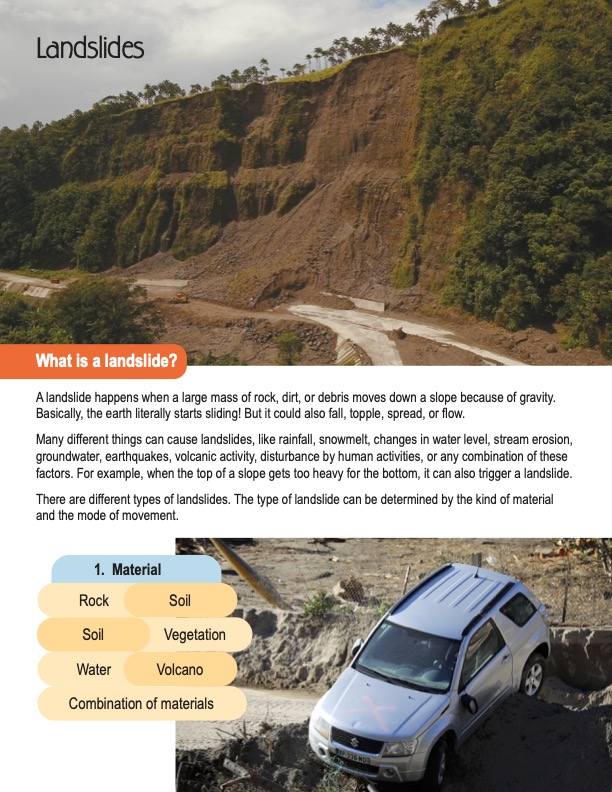 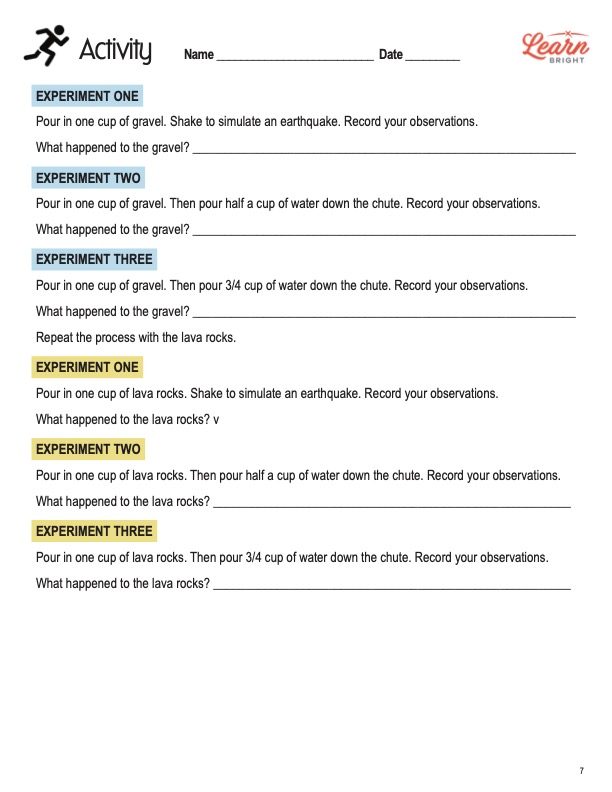 Landslides and Sinkholes STEM lesson plan is an interdisciplinary investigation for students to discover the causes and outcomes of landslides and sinkholes. This STEM lesson is designed to be engaging and informative, with a focus on the real-world implications of these natural disasters.

Students will first explore the science behind landslides and sinkholes, learning about the geological processes that create them. They will then investigate how human activity can trigger or exacerbate these events. Finally, students will learn about the often devastating effects of such events on communities and about ways that people are working to mitigate the damage.

What our Landslides and Sinkholes STEM lesson plan includes

Lesson Objectives and Overview: Landslides and Sinkholes STEM teaches students about the causes and effects of these types of natural disasters. Students will discover that human interference can cause these events to occur. They will also learn how people deal with the aftermath of a landslide or sinkhole and discuss ways to mitigate damage. This lesson is for students in 3rd grade, 4th grade, and 5th grade.

Every lesson plan provides you with a classroom procedure page that outlines a step-by-step guide to follow. You do not have to follow the guide exactly. The guide helps you organize the lesson and details when to hand out worksheets. It also lists information in the yellow box that you might find useful. You will find the lesson objectives, state standards, and number of class sessions the lesson should take to complete in this area. In addition, it describes the supplies you will need as well as what and how you need to prepare beforehand. The lesson activity requires quite a few supplies, including card stock, tape (clear and duct), scissors, rulers, markers, small cups, water, sand, gravel, and plastic bins.

The “Options for Lesson” section of the classroom procedure page lists a number of suggestions for ideas and activities you could incorporate into the lesson. This lesson only has two suggestions, but you are welcome to come up with your own ideas. One option is to demonstrate the first experiment on the activity page and then allow students to work independently for the last two experiments. Another idea is to have a geologist or local expert speak with the class about landslides and sinkholes and answer students’ questions.

The teacher notes page provides an extra paragraph of information to help guide the lesson. You can use the blank lines to write down any other ideas or thoughts you have about the topic as you prepare.

What Is a Landslide?

The Landslides and Sinkholes STEM lesson plan contains three pages of content. To start off, the lesson describes a landslide as an event that happens when a large mass of rock, dirt, or debris move down a slope. This can happen because of the force of gravity. Basically, the earth literally starts to slide down.

Many different things can cause a landslide, such as rainfall, melted snow, changes in water level, steam erosion, and groundwater. Earthquakes, volcanic activity, or disturbances in human activity can likewise cause a landslide. A combination of any of these factors may also result in this type of disaster. As an example, when the top of a slope gets too heavy for the bottom, it can trigger a landslide.

There are different types of landslides, and scientists generally determine which type it is according to the material and mode of movement involved. Materials include rock, soil, vegetation, water, and volcanoes, or a combination. Movements include falls or topples, translational slides, or lateral spreads.

Falls or topples involve events where rocks and boulders detach from a steep slope or cliff and move abruptly. With translational slides, surface material separates from the more stable bottom layer, like with an earthquake. And lateral spreads involve a sideways flow rather than a downward flow.

Such natural events can occur almost anywhere. Students may be surprised to learn that a landslide can even occur underwater. These are called submarine landslides. When these happen, they can sometimes cause a tsunami. And there is evidence that a martian landslide occurred on Mars when a giant asteroid hit the planet and caused a section of earth the size of the U.S. to slide forward.

In the United States, landslides can happen in all 50 states, even Hawai’i and Alaska. Oftentimes, they happen in mountainous areas, but they can also occur along the coasts of California, Oregon, and Washington. They can be super slow or happen in an instant. The speed usually depends on the type of landslide and the slope of the area. Debris flows can reach up to 200 miles an hour! Usually, however, the flow travels at about 30 to 50 miles per hour.

These kinds of events don’t often make the news, but they do cause a lot of damage. In fact, they can generate up to $3.5 billion in damages each year in the United States. As far as risk goes, people who live in hilly or mountainous areas are at the highest risk of experiencing a landslide. That’s why scientists have to understand the land before people can build roads or homes.

On the flip side, sinkholes are a natural disaster that happen when the earth collapses and leaves a depression. They can be shallow or very deep, and narrow or very wide. Basically, they are pits in the ground that form where water gathers and has nowhere to drain except slowly down into the bedrock. Small sinkholes are a few feet wide and 10 to 15 feet deep. Large sinkholes can be hundreds of miles wide and deep.

Sinkholes can happen naturally, but humans can also create them. A natural sinkhole occurs due to erosion or underground water. The ground consists of rock, dirt, and minerals. It may feel stable and sturdy to us, but it is actually constantly moving and shifting.

Water can seep between rocks and dirt and make its way to underground reservoirs. As this happens, it slowly erodes the rocks and minerals. If there is a lot of water, the area becomes weak and can no longer support the weight of the dirt. Then the area collapses and makes a hole.

Humans can cause sinkholes to form when engaging in certain activities such as drilling, mining, or construction. Broken water pipes and heavy traffic can also be the cause of a sinkhole event. Most of the time, sinkholes take a long time to develop, but some develop really quickly. These are the ones that swallow homes, cars, and building.

A sinkhole cannot happen just anywhere. In general, they mainly develop in areas that have bedrock that comprising limestone, carbonate rock, or salt deposits. Such materials tend to erode more with acidic water. Acidic water can come from pollution or rainwater that passes through decaying plants.

Most sinkholes happen because of human activity. Construction diverts water to areas where it might not naturally drain, so it becomes concentrated there. Therefore, it’s essential to consider the bedrock and water drainage when building or expanding towns and cities.

The largest sinkhole on record was in Winter Park, Florida, in 1981. It measured about 350 feet wide and 130 feet deep. It swallowed homes, businesses, and a car dealership. Today, it is known as Lake Rose after Mae Rose Owens, a woman whose house was among the buildings that the sinkhole swallowed up.

The Landslides and Sinkholes STEM lesson plan includes three worksheets: an activity worksheet, a practice worksheet, and a homework assignment. Each one will help students solidify their grasp of the material they learned throughout the lesson. You can refer to the classroom procedure guidelines to know when to hand out each worksheet.

The activity involves three separate experiments using model houses. Students will first build the three houses and number each one on its roof. They can decorate the houses using markers. Then they will gather the bin, downspout, and tap. They will place the sand, gravel, and lava rocks each in a separate cup.

Students will place the homes in three different locations in the bin near the debris chute. One will be two inches in front, another two inches to the left, and the last two inches to the right. They will respond to three questions regarding the houses and the three types of material.

For experiment one, they will pour one cup of sand. (The sand should not slide down.) Then they will increase the slope of the chute until the sand is about to slide. After triggering an “earthquake” by shaking the cute (not too hard), the will answer a question about what happened to the sand.

For experiment two, students will pour in a cup of sand followed by half a cup of water down the chute. Again, they will record their observations. With the final experiment, they will do the same as test two but use 3/4 cup of water.

Students will repeat this whole process with gravel and then with lava rocks, each time recording what the observe on the lines provided. At the end, they will respond to all the questions on the third activity page regarding what happened throughout the three experiments.

For the practice worksheet, students will create an informational flyer or brochure with a design for a house that would survive a landslide. They must include a drawing of the house and describe what makes it better than the one they have now. They must also include information on how the home’s structure will help during a landslide.

The homework assignment requires students to answer a series of questions about several significant landslides. They must do some research to find the answers. In addition, they will have to use critical thinking to respond to the final prompt.

There are answer keys for both the practice and homework worksheets. The correct answers are in red to make it easy to compare them with students’ work. Given the nature of the practice worksheet, answers will vary. If you choose to administer the lesson pages to your students via PDF, you will need to save a new file that omits these pages. Otherwise, you can simply print out the applicable pages and keep these as reference for yourself when grading assignments.