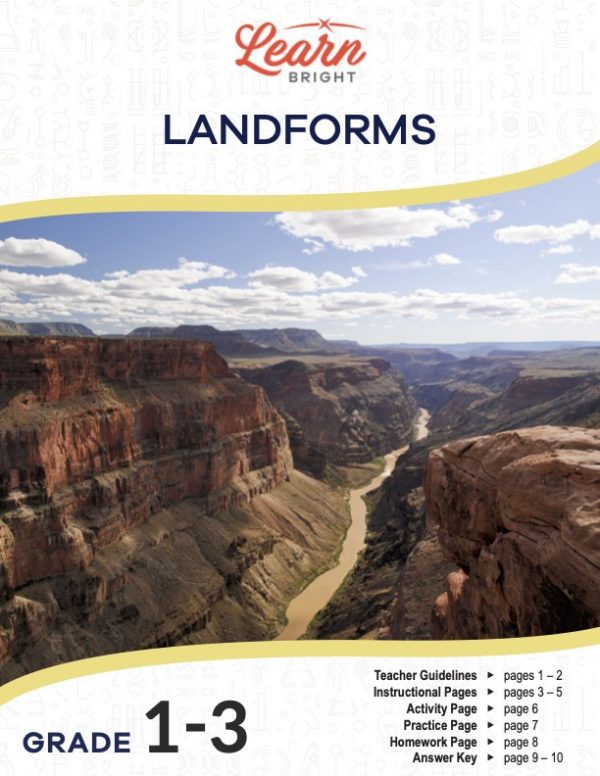 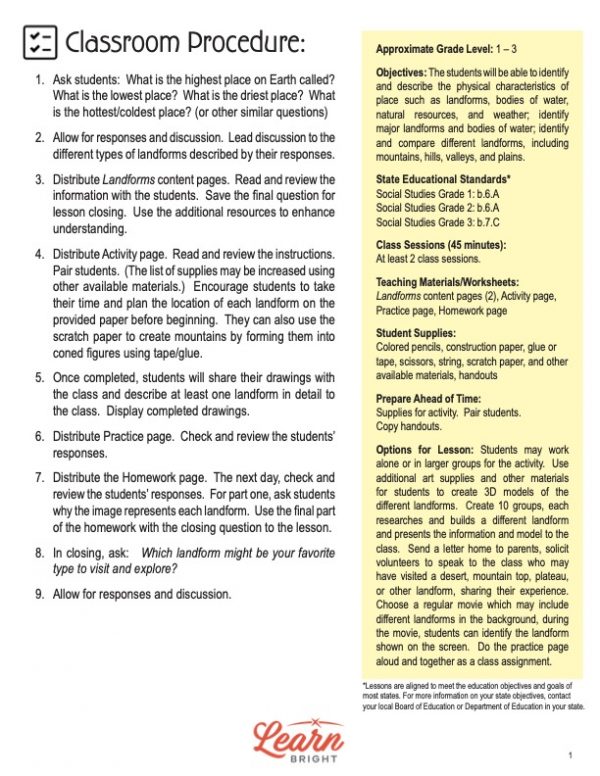 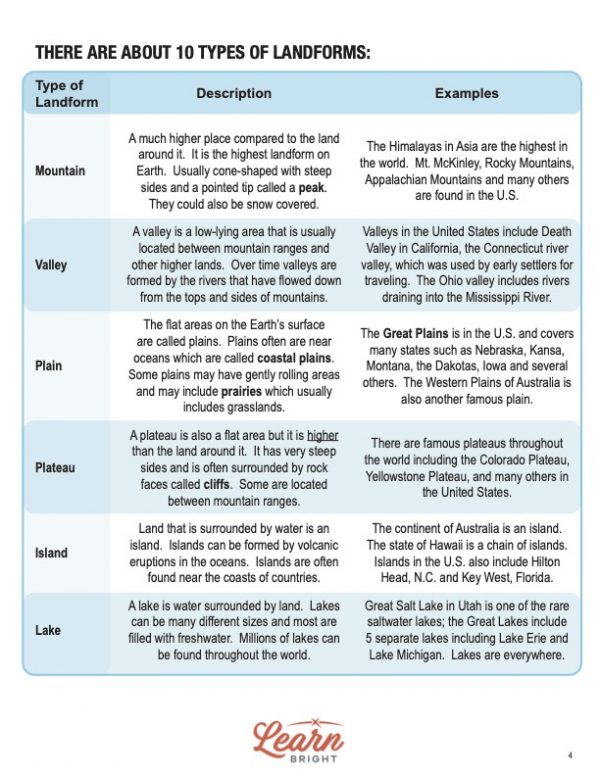 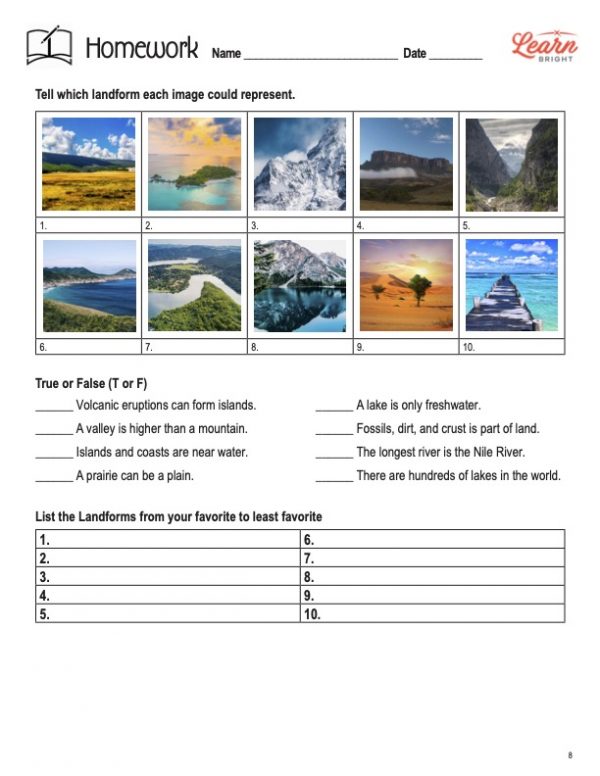 The “Options for Lesson” section contains a few suggestions for alternative or additional activities you can incorporate into the lesson if you want. One such suggestion is to create 10 different groups of students and have each research and build a different landform to present to the class. Another option is to have students identify different landforms from an age-appropriate movie that displays different ones throughout.

What our Landforms lesson plan includes

Lesson Objectives and Overview: Landforms explores the many unique features that create the Earth. Students will discover many physical traits and other qualities of these different places. They will learn about mountains, hills, and valleys, as well as about oceans, rivers, and lakes. This lesson is for students in 1st grade, 2nd grade, and 3rd grade.

Every lesson plan provides you with a classroom procedure page that outlines a step-by-step guide to follow. You do not have to follow the guide exactly. The guide helps you organize the lesson and details when to hand out worksheets. It also lists information in the yellow box that you might find useful. You will find the lesson objectives, state standards, and number of class sessions the lesson should take to complete in this area. In addition, it describes the supplies you will need as well as what and how you need to prepare beforehand. You will need to provide a few supplies for this lesson: colored pencils, construction paper, glue or tape, scissors, string, scratch paper, and any other materials you want to include.

There are many suggestions in the “Options for Lesson” section that you can incorporate into the lesson plan if you wish. One suggestion is to provide extra supplies and materials for students to create 3D models of their landforms for the activity. Another idea is to create 10 groups of students and have each group research and build a different landform. Each group would present their 3D model and what they learned about their landform. You could also send a letter home to parents asking for volunteers to speak to the class about places they’ve been, such as mountains, deserts, or other landforms. Another option is to choose an age-appropriate movie that shows various landforms and have students identify them as they show up on screen. One final idea is to complete the practice page aloud as a class.

The paragraph on this page provides a little extra information on what to expect from the lesson plan. It suggests that you use a world map to display various landforms throughout the world that students can identify. You can use the blank lines on this page to write down any thoughts or ideas you have as you prepare the lesson.

The Landforms lesson plan contains three pages of content. Despite the name, a landform can include bodies of water as well. Throughout the world, these natural features cover the Earth, and their names depend on their physical traits. Each type of landform has different physical features, such as type of soil, amount of water, or type of rock covering the surface. In general, nature shapes them all over the course of thousands of years.

Students will learn that there are several elements that can create a landform, including crust, dirt, fossils, sediment, and volcanoes. The crust is the rocky covering around the Earth. Dirt is a mixture of crushed rock and pieces of dead material from plants and animals. It often covers much of the Earth’s crust. Fossils also exist in rocks or the crust. These are the remains of living things.

Sediment includes different particles, like pebbles or sand, that have settled on the Earth’s surface. Openings in the Earth’s surface, or volcanoes, erupt melted rocks and reshape the landscape. These materials come together to form various landforms on the Earth. Some end up covered with water while other sit high on top of mountains.

Students will learn that there are roughly 10 types of landforms. Mountains, such as the Himalayas in Asia or Rocky Mountains in North America, rise much higher than the land surrounding them. These are the highest landforms on Earth. Usually, a mountain is in the shape of a cone, with steep sides and a pointed tip or peak.

Valleys are low-lying areas that usually lie between mountain ranges or other higher-level lands. Over time, valleys formed because of rivers that flowed down from the tops and sides of mountains. Examples of valleys in the United States include Death Valley in California and the Connecticut River Valley, which the early settlers used for travel.

Another type of landform is a plain. Plains are very flat areas, and the ones found near oceans are called coastal plains. Some of these areas have gentle rolling hills or include prairies or grasslands. The Great Plains in the U.S. cover many states in the middle of the country, including Nebraska, Kansas, the Dakotas, and Iowa. The Western Plains of Australia is another famous plain.

The lesson next describes plateaus, which are flat areas that sit higher than the land around them. A plateau has very steep sides and is often surrounded by cliffs. Famous plateaus dot lands throughout the world, such as the Colorado Plateau or the Yellowstone Plateau.

Islands, on the other hand, are completely surrounded by water. They form from volcanic eruptions in the ocean. Many islands exist near the coasts of continental countries. Technically, the continent and country of Australia is an island itself. The state of Hawaii is a chain of islands. There are also a few islands as part of other states, such as Hilton Head in North Carolina and Key West in Florida.

Speaking of water, landforms also include lakes, oceans, and rivers. Lakes are bodies of water surrounded by land—the opposite of islands. They can be different sizes, and most of them contain fresh water. Millions of lakes exist throughout the world. The Great Lakes in North America include a group of five separate lakes. The Great Salt Lake in the state of Utah is one of the rare lakes that has salt water instead.

The biggest body of water on Earth is an ocean. Each ocean has its own characteristics, but they all contain salt water. There are five main oceans in the world: Pacific, Atlantic, Indian, Southern, and Arctic. Every continent on the Earth touches at least one ocean.

Students will then learn about coasts. The coast of a country or continent is also its own landform. Coasts are areas where an ocean touches land. They often include beaches or cliffs, and they are formed from waves, tides, and currents. In the United States, the Pacific Coast lines the west side of the country, the Atlantic Coast lines the east side, and the Gulf Coast lines the south.

Deserts are generally hot and dry and receive very little rain, but they can actually be cold. In fact, some deserts are all ice, such as Antarctica. These habitats are very large and contain only a few plants because of the shortage of water. Some deserts boast lots of sand and might have dunes, which are hills of sand. Even in deserts that are very hot during the day, the nights can get very cold. Famous deserts include the Sahara Desert in Africa, which is roughly the size of the United States. The Mojave Desert, in the southwest part of the U.S., is home to Death Valley.

Finally, students will learn about rivers. Rivers are long flowing bodies of water that flow through land from one source of water into a larger body of water, such as a lake or ocean. Some rivers simply flow into other rivers. They can also be part of another landform, like a mountain or valley. The largest river in the U.S. is the Mississippi River, which flows through 10 different states. The longest river in the world is the Nile River in Africa, which spans 4,132 miles!

Here is a list of the vocabulary words students will learn in the Landforms lesson plan:

Students will use the supplies you give them to create a poster that displays each of the 10 landforms. They should do their best to draw them as they appear in nature. After the pictures are complete, they will label the landform and write one place in which they would find it. For instance, they could write that they would likely find an island off the coast of a country.

There are a few sections of the homework assignment. The first section requires students to look at 10 pictures and identify which landform each one represents. The second section requires them to decide whether each of eight statements is true (T) or false (F). Finally, students will list the 10 landforms in order from their most to least favorite.

The final few pages of the document are answer keys for the practice and homework worksheets. All the correct answers are in red, which makes it easy to compare to the responses from your students. Students’ answers should mirror those on these pages with the exception of the last section of the homework worksheet. If you choose to administer the lesson pages to your students via PDF, you will need to save a new file that omits these pages. Otherwise, you can simply print out the applicable pages and keep these as reference for yourself when grading assignments. 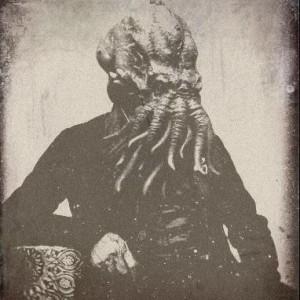 A great resource during the covid quarantine!

the website was a bit difficult (slow) to navigate but overall a great idea. I'm thankful for the help from CL.

It is a simple good material for elementary class. We enjoyed doing the work provided as a small home study group. Thank you.