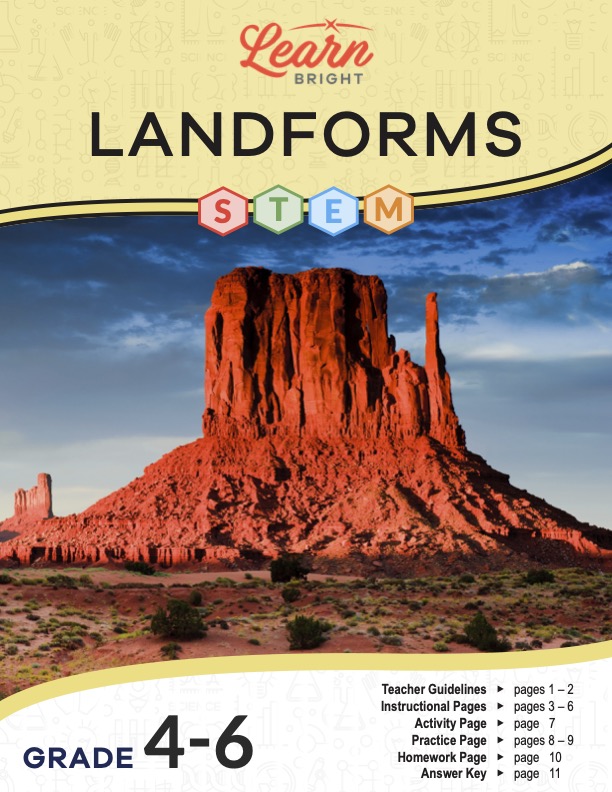 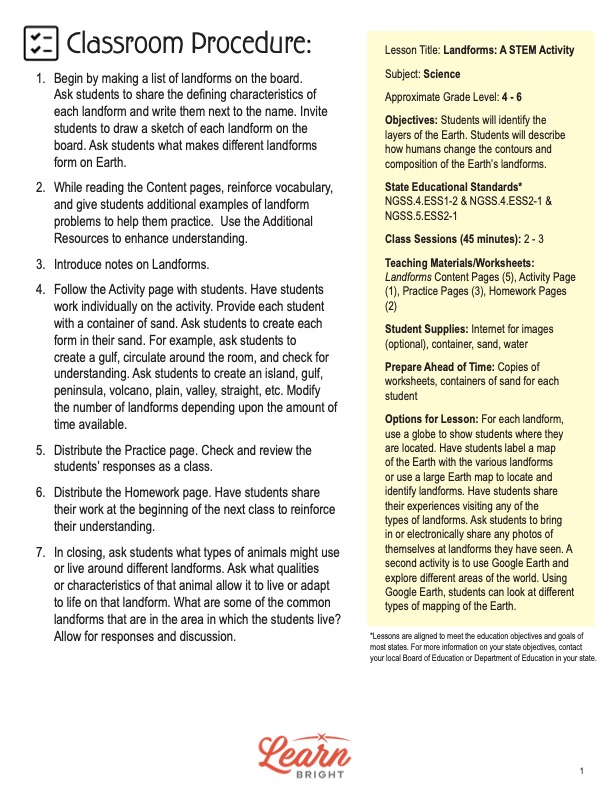 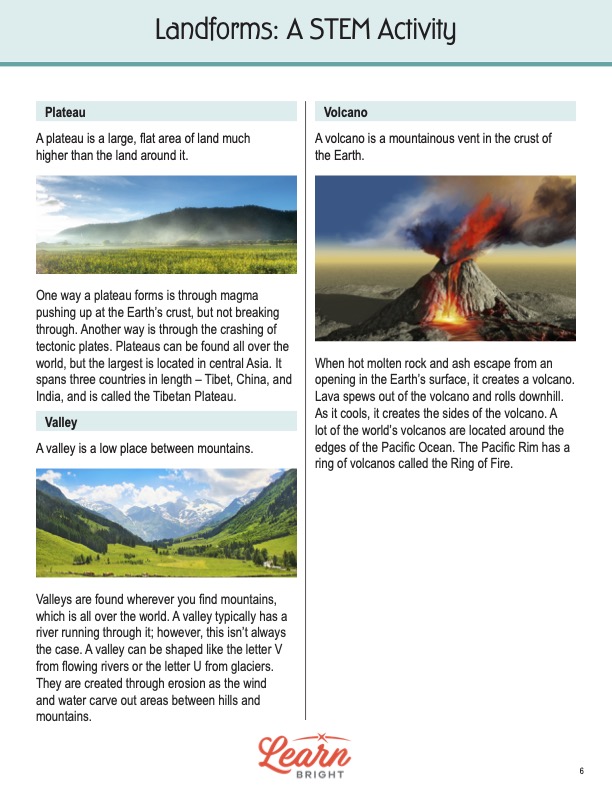 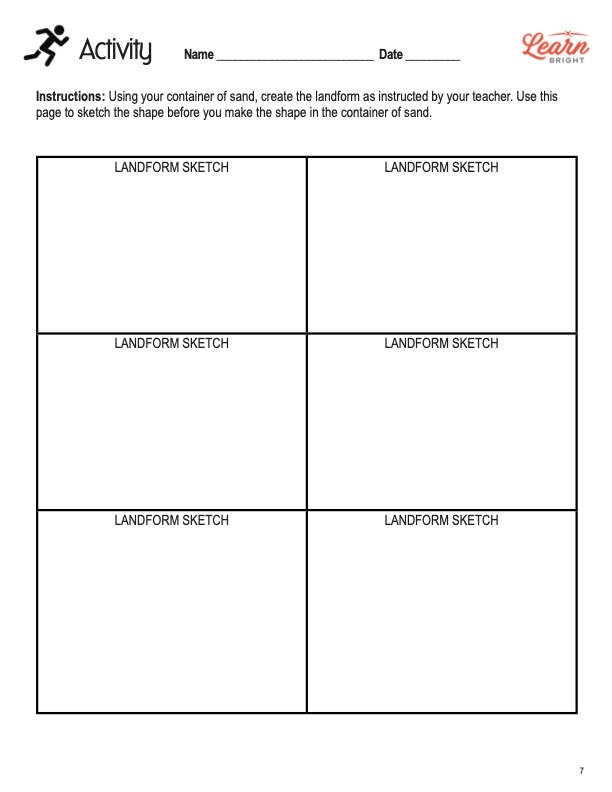 Looking to engage your students in a fun and informative lesson on different landforms? In this lesson, students will explore various types of landforms, learning about their location, development, and causes. They’ll also get to create their own dioramas, making them experts at identifying landforms. This is a great lesson for getting students engaged in learning about the Earth.

You can refer tot he “Options for Lesson” section on the classroom procedure page to get some more suggestions of ideas and activities to add to the lesson. For instance, one idea is to have students explore different areas of the world on Google Earth.

Lesson Objectives and Overview: Landforms STEM introduces students to the layers of the Earth. They will discover how humans have changed the contours and composition of the Earth’s landforms over time. They will also learn how and why these natural features of the planet form and develop. This lesson is for students in 4th grade, 5th grade, and 6th grade.

Every lesson plan provides you with a classroom procedure page that outlines a step-by-step guide to follow. You do not have to follow the guide exactly. The guide helps you organize the lesson and details when to hand out worksheets. It also lists information in the yellow box that you might find useful. You will find the lesson objectives, state standards, and number of class sessions the lesson should take to complete in this area. In addition, it describes the supplies you will need as well as what and how you need to prepare beforehand. For this lesson, you will need to obtain containers (enough for each student), sand, and water.

You will find several suggestions for additional ideas and activities in the “Options for Lesson” section of the classroom procedure page. One idea is to use a globe to show students where they could find each type of landform they learn about in the lesson. Another option is to have students label a map of the Earth with the various landforms or use a large map to locate and identify landforms. Students could also share their experiences of visiting any of the types of landforms the lesson mentions (or others that it doesn’t). Ask students to bring in or electronically share any photos of themselves at various landforms they have seen. One last suggestion is to incorporate a second activity in which students use Google Earth to explore different areas of the world. They could also look at different types of mapping of the Earth.

The teacher notes page provides an extra paragraph of information to help guide the lesson and remind you what to focus on. The blank lines on this page are available for you to write out thoughts and ideas you have as you prepare the lesson.

The Landforms STEM lesson plan has four content pages that outline 14 specific types of landforms. These natural features are all over the Earth’s surface. A landform is basically a physical characteristic that we define by its form and location. They develop and form over time due to natural processes, including erosion, sinking, rising, and weathering from various types of precipitation. These processes shape the Earth’s surface in unique ways.

The first landform students will learn about is the archipelago. An archipelago is a group or chain of islands that cluster together in an ocean or sea. One well-known example is the Malay Archipelago, which rests between the Pacific and Indian Oceans in Southeast Asia. It consists of more than 25,000 islands! Students may be surprised to learn that the countries of Japan, Britain, and New Zealand are also archipelagos themselves.

Next, the lesson describes the butte, which is a flat-topped rock or hill formation with really steep sides. They form in arid regions due to weathering and erosion. There are lots of buttes in Mexico and the southwest parts of the United States. Monument Valley, an area that covers parts of both Utah and Arizona, is famous for its buttes.

Caves are large holes in the ground or side of a mountain. If you went exploring anywhere on the Earth, it is likely you would be able to find a cave. They are everywhere on the planet. Students will learn that people have not yet explored or documented most of the caves on Earth. An interesting fact about these natural features is that mineral deposits inside them create really amazing shapes!

The next four landforms students will explore are deserts, glaciers, dunes, and isthmuses. Deserts, like caves, exist all throughout the world. Most of them are in Africa and Australia. The largest desert in the world is the Sahara, which covers almost all of North Africa. There are actually several types of deserts, such as rock, pebble, and sand.

A dune is a hill of sand. What’s interesting about this landform is that its shape largely depends on the wind. This is because sand is light and will easily move with the flow of wind. Changes in the wind cause changes in the dunes, which is why they constantly change shape. Dunes form in sand deserts and along beaches. Most dunes in the world are, unsurprisingly, in the Sahara.

The lesson then describes glaciers, which are long-lasting, slow-moving rivers of ice on land. One can find glaciers on every continent on Earth, but the majority are found in Antarctica and Greenland. These landforms develop over time as snow melts and freezes. The snow compacts more and more from its own weight, creating a glacier.

An isthmus is the last landform described on this page. It is a narrow strip of land that connects two larger land masses, with water on both sides. The two most famous of these landforms are the Isthmus of Panama, which links North and South Americas, and the Isthmus of Suez, which links Africa and Asia. This kind of landform results from volcanic activity that first creates islands. The sediment collected between two islands creates an isthmus.

The third page details islands, mountains, peninsulas, and plains. An island is similar to an isthmus, but instead of having water on two sides, water completely surrounds an island. When the tops of volcanoes peek out from the water, an island eventually forms. You can find islands all around the world in oceans, seas, lakes, or even rivers.

Mountains are very tall and elevated compared to the land around them. They form due to movements of the Earth’s crust. When two tectonic plates push into each other, the result is a mountain. Volcanoes can also create mountains. The tallest mountain in the world is Mount Everest. Notable mountain ranges include the Andes in South America, the Alps in Europe, and the Himalayas in Asia.

Next, the peninsula is a body of land surrounded by water on three of four sides. It forms when the ocean and sea levels rise and fall over and over. These also exist almost everywhere on Earth. It’s similar to an isthmus as well since it projects into a body of water, but it doesn’t connect to another landmass.

Plains are flat lands that have very small, if any, changes in elevation. Most plains are formed by erosion. As mountains erode, they carry bits of sediment with them that settle at the bottom and create a flat area. The Great Plains in the U.S. cover 10 whole states, including Montana, Wyoming, Nebraska, Colorado, Texas, and New Mexico.

Finally, the last three landforms students will learn about are plateaus, valleys, and volcanoes. A plateau is a large, flat area of land that is much higher than the land around it. One way it can form involves magma pushing up at the Earth’s crust but not breaking through. It can also form when tectonic plates crash. The largest plateau is in central Asia. It spans across Tibet, China, and India.

Valleys exist wherever mountains exist. A valley is a low place between mountains that typically—but not always—has a river running through it. The shape of a valley can resemble a V due to the rivers that flow through it or a U due to glaciers. These landforms develop through erosion as the wind and water carve out areas between hills and mountains.

The last landform of the lesson is the volcano. Volcanoes are mountainous vents in the crust of the surface of the Earth. They form when hot, molten rock and ash escape from an opening in the Earth’s crust. Lava spews out and rolls downhill, creating sides of the volcano. The largest volcanoes in the world are around the edges of the Pacific Ocean. The Pacific Rim specifically has a ring of volcanoes known as the Ring of Fire.

The Landforms STEM lesson plan includes three worksheets: an activity worksheet, a practice worksheet, and a homework assignment. Each one will reinforce students’ comprehension of lesson material in different ways and help them demonstrate when they learned. Use the guidelines on the classroom procedure page to determine when to distribute each worksheet to the class.

For the activity, students will use a container of sand to create various landforms. They will first sketch pictures of six different types according to your instructions. Then they will use the sketch to make the shape in the container of sand.

The practice worksheet requires students to define the landforms listed on the page. The first of eight is provided. Students will write a definition as well as find a picture that represents each landform. They can choose to draw a picture instead of they want to.

Students will create a landform diorama out of whatever supplies they choose. The diorama must include at least six landforms from the list on the page. Students should also correctly and clearly label each one.

There are answer keys for the practice and homework worksheets of this lesson plan. Students’ responses for the practice worksheet should closely resemble those of the answer key. There will be some variation given the nature of the assignment. The answer key for the homework assignment provides images of two sample dioramas. You may want to show them to your students to give them an idea of what they can do. If you choose to administer the lesson pages to your students via PDF, you will need to save a new file that omits these pages. Otherwise, you can simply print out the applicable pages and keep these as reference for yourself when grading assignments.

FacebookTwitter
Be the first to review this item
Filter Reviews:
×
Clear filter
More Filters
A
09/29/2022
Anonymous