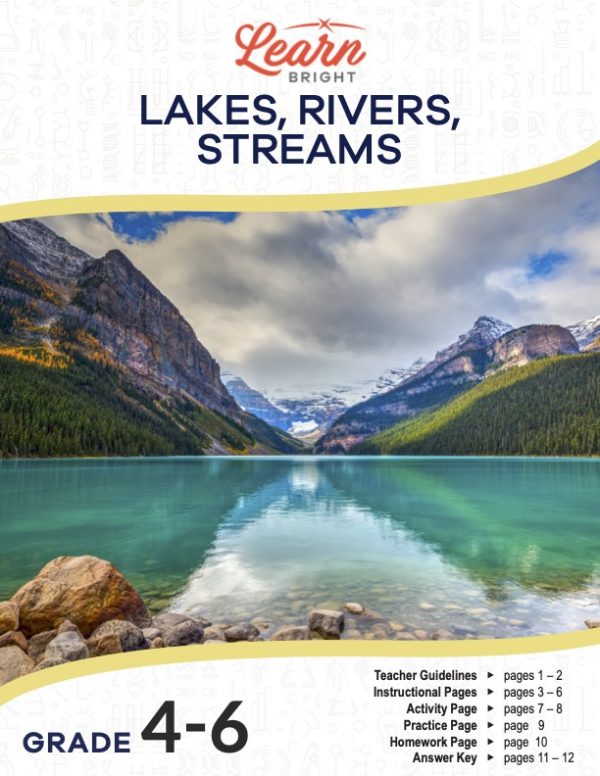 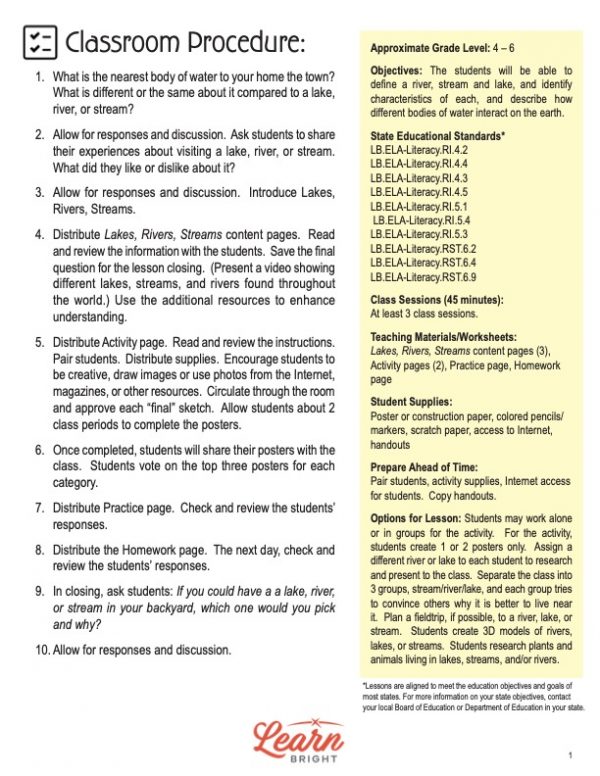 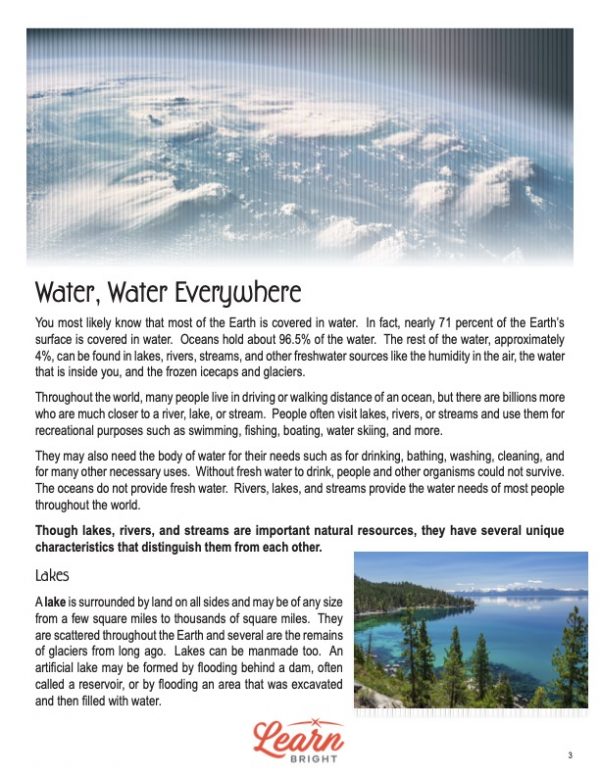 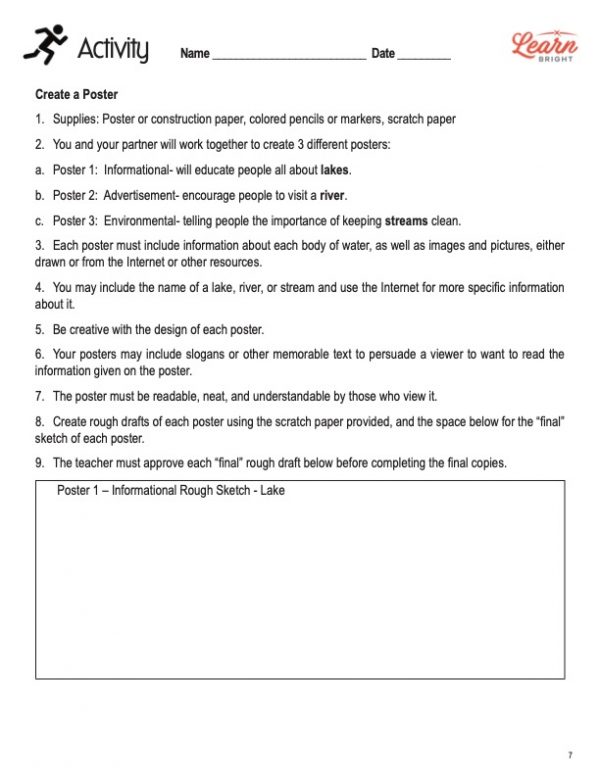 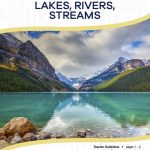 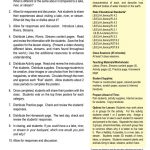 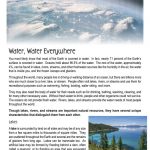 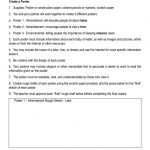 Lakes, Rivers, Streams introduces students to these three water bodies. Students will learn how they are similar and how they differ from one another. They will discover their different characteristics and be able to explain how each body of water interacts with the earth.

In the “Options for Lesson” section, you will find a number of suggestions for things you can do in addition to or as alternative activities for the lesson. One suggestion is to assign a different river or lake to each student to research and later present to the class.

Lesson Objectives and Overview: Lakes, Rivers, Streams teaches students about these three bodies of water, including how they are alike and how they differ from each other. Students will learn the traits of each and how to describe how different water bodies interact with the earth. This lesson is for students in 4th grade, 5th grade, and 6th grade.

Every lesson plan provides you with a classroom procedure page that outlines a step-by-step guide to follow. You do not have to follow the guide exactly. The guide helps you organize the lesson and details when to hand out worksheets. It also lists information in the yellow box that you might find useful. You will find the lesson objectives, state standards, and number of class sessions the lesson should take to complete in this area. In addition, it describes the supplies you will need as well as what and how you need to prepare beforehand. This lesson requires poster or construction paper, colored pencils or markers, and scratch paper. You will also need to make sure students have access to the internet for research purposes.

There are several suggestions in the “Options for Lesson” section that you might want to incorporate into the lesson as additional activities or alternate ways to approach certain aspects. A couple of them relate specifically to the activity. Students could work in groups or alone rather than in pairs. Instead of making three posters, you could have them make just one or two. Another suggestion is to assign a different river or lake to each student to research and later present to the class. You could divide students into three groups, each one representing either streams, rivers, or lakes. Each group would then have to try to convince the others why it is best to live near their body of water. Another fun idea is to plan a field trip to a nearby lake, river, or stream. Students could also create 3D models of one of the three water bodies or research plants and animals that live in them.

The paragraph on this page provides extra information about the lesson. It suggests focusing on how these bodies of water can form and what defines each one. It also mentions that you could benefit from teaching this lesson in conjunction with others that relate to landforms or bodies of water. Use the blank lines to write down thoughts and ideas you have before giving the lesson to your students.

The Lakes, Rivers, Streams lesson plan contains four pages of content. Students first learn a little about water in general. About 71% of the earth is water, and 96.5% of that is in the oceans. The rest is made up of the lakes, rivers, streams, and other freshwater sources — even the frozen icecaps and glaciers. The water inside our bodies is actually fresh water as well.

A lot of people all over the world live fairly close to an ocean. However, billions more live much closer to much smaller water bodies like rivers, lakes, and streams. People generally like to visit these places for recreational purposes such as swimming, boating, and water skiing. Occasionally, people need to use them to wash, bathe, drink, clean, and so on. In fact, without this fresh water, people and other living organisms would not be able to survive.

Each of these three bodies of water is unique. They are all important natural resources that benefit the world. They are different and have various traits that distinguish them from each other. This lesson provides information on each separate body of water one by one, including how they form and how they interact with the others.

Lakes are surrounded by land on all sides, and their sizes vary from as small as a few square miles to thousands of square miles. They receive water from rivers or streams. They exist all over the earth, some natural and others manmade. Some lakes are actually the remains of melted glaciers from long ago. People can form artificial lakes by flooding behind a dam or excavating an area and filling it with water.

Most lakes form naturally. There are several types. Tectonic lakes are the oldest and form due to the tectonic uplift of mountain ranges. Such movement creates depressions that fill with water, which then become lakes. Another type forms from landslides or glacial blockages (ice-dam). During the last ice age in the U.S., a huge lake formed in the state of Washington. The ice retreated, and a flood then created the Sun Lakes.

Salt lakes form either when there is no natural outlet for the water to flow or water evaporates rapidly. The surface of the water table ends up with a higher salt content than normal. The Great Salt Lake and the Dead Sea are examples of this type of lake. Given the high salt content, these water bodies are not sources of fresh water.

Oxbow lakes form from meandering rivers that eventually get blocked off. Crater lakes develop when volcanic craters fill up with precipitation, like Crater Lake in Oregon. Glacial lakes form as glaciers advance and retreat, scraping depressions in the surface that eventually fill with water. This is how the Great Lakes were formed, as well as many in Scandinavia, Siberia, and Canada.

A river is a natural flowing body of water, usually fresh water, that flows toward other water bodies, such as oceans, lakes, or other rivers. Some flow into the ground and dry up before they ever reach another body of water. Like lakes, we can find rivers all over the world. They usually receive their water from precipitation, groundwater, springs, or stored water released from natural ice and snow packs, like glaciers.

The beginning of a river is its source, and some rivers have more than one. The river follows a path called a course and ends at the mouth, where it empties into another water body. The water at a river’s source is cooler than it is at the mouth. It is also clearer and contains more oxygen and possibly freshwater fish, such as trout.

The middle parts of rivers are wider and contain more diverse species, such as algae or aquatic green plants. At the mouth, and there can be more than one, the water is murky from all of the sediment that the river picked up along its course. The light does not penetrate the water as easily, and the oxygen levels are therefore lower. There is also much less diversity in wildlife.

Rivers can flow down mountains, through valleys, and along plains. They can even create canyons. In fact, scientists believe that the Colorado River actually carved out the Grand Canyon starting five or six million years ago. Other well-known rivers include the Amazon River in South America and the Nile River in Africa. One of the deepest rivers is the Congo, also in Africa, which reaches a depth of 750 feet.

In many places, people refer to a stream as a river and vice versa. There is no definite measurements for the size of a river or stream. Streams, like rivers, are water bodies confined by a bed with a left bank and right bank. Their traits depend on where they are.

Many living organisms, both plants and animals, live in streams. Like other sources of fresh water, streams play an important role in the water cycle. They also play a vital role in ecosystems throughout the world. There are several types of streams: brook, creek, runnel, and tributary.

A creek is small to medium in size, and people can sometimes travel through creeks using a small boat. Brooks are a little smaller than creeks. Springs feed water into a brook, which is shallow with a bed made primarily of rock. Runnels are narrow channels on shoreline beaches or river floodplains. Another name for a runnel is a swale. Tributaries are streams that join another river rather than flowing into a sea or lake.

People call streams different terms according to the region in which they live. These terms include bayou, branch, crick, gill, rivulet, run, and wash. Like lakes and rivers, they are important natural freshwater sources that help plants and animals survive throughout the world.

The Lakes, Rivers, Streams lesson plan includes three worksheets: an activity worksheet, a practice worksheet, and a homework assignment. Each one will help reinforce students’ comprehension of the lesson material. You can refer to the guidelines on the classroom procedure page, which outline when to hand out each worksheet to the class.

The practice worksheet is broken up into a few different sections. The first section requires students to tell whether a statement describes a lake (L), river (R), or stream (S). There are 20 statements total for this section. The next section lists eight lakes, and students must tell which type of lake they are. The final sections requires them to draw and label a river using the terms in the instructions.

The last couple pages of the document are answer keys for the practice and homework worksheets. The answers are all in red to make comparing them to students’ responses easy. The answer key for the practice worksheet provides a sample diagram for the final prompt in which students draw and label a river. If you choose to administer the lesson pages to your students via PDF, you will need to save a new file that omits these pages. Otherwise, you can simply print out the applicable pages and keep these as reference for yourself when grading assignments.

This was a very useful tool ,a complete plan with videos and activities for use as it is.Accessing the resource was also easy. I would definitely recommend this

Great All In One Packet!

This was a great packet for my unit on lakes, rivers, and streams. The notes were informative and my students really enjoyed making the posters. Highly recommend!

All of your materials/resources are right on cue with the standards providing interesting passages and questions that are aligned with the current standards. Thank you for the ability to use this great product.