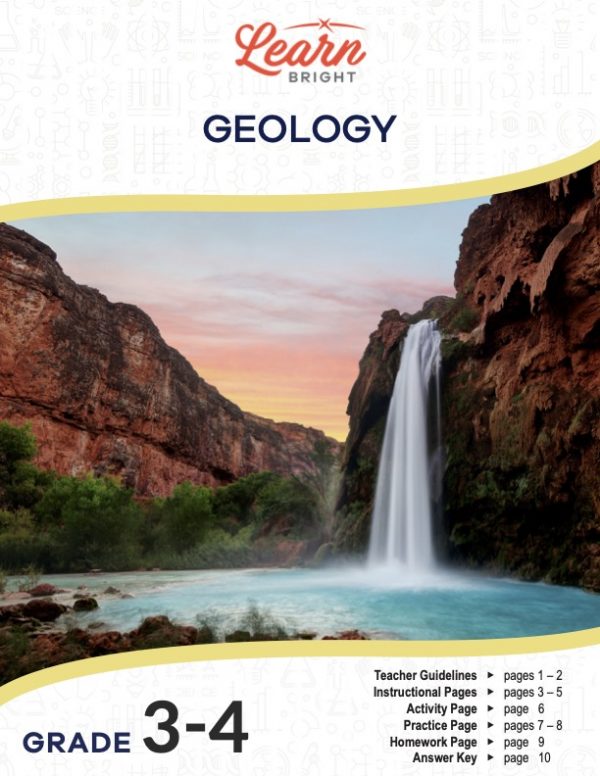 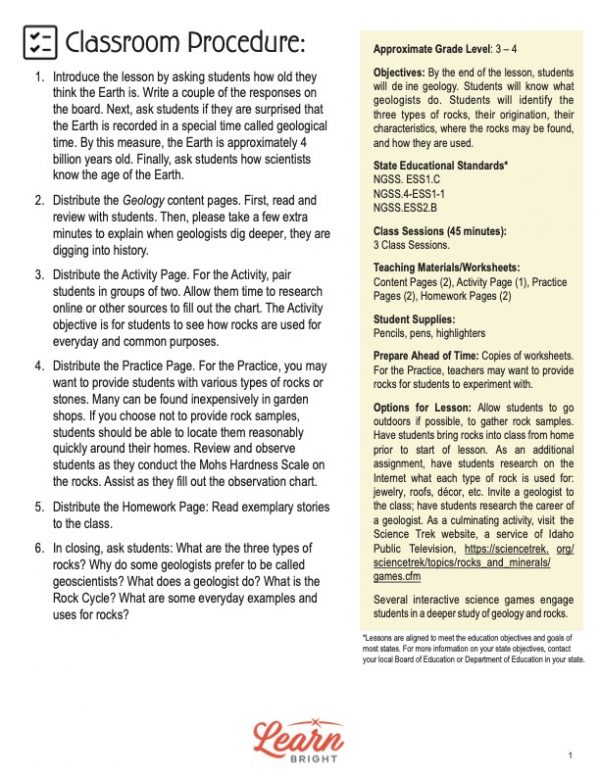 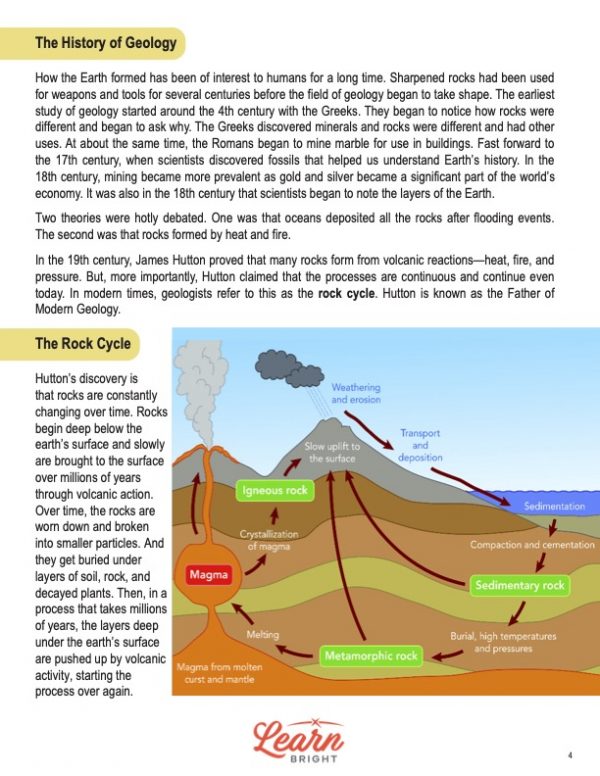 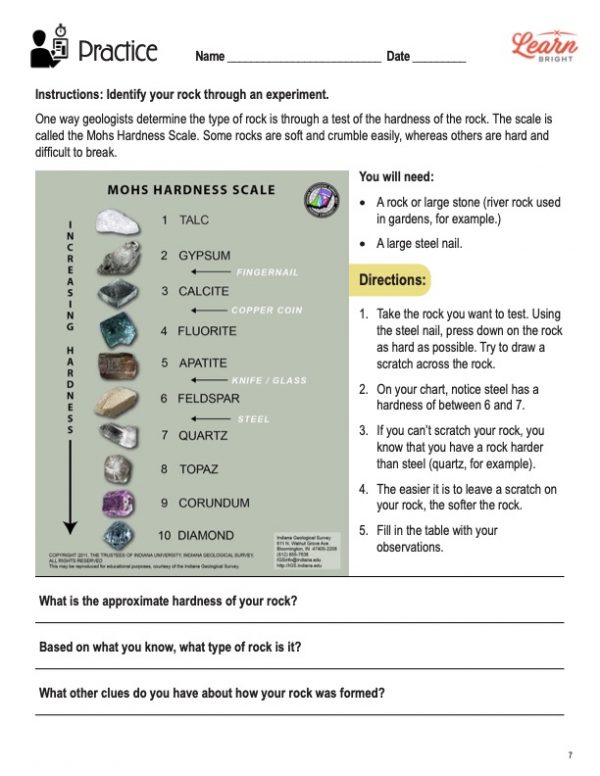 Geology introduces students to the study of rocks and a geologist’s role in learning all about them and much more. Students will discover that all rocks fall into one of three main categories: metamorphic, igneous, and sedimentary. They will learn to recognize the traits of each rock and sort them correctly.

In the “Options for Lesson” section on the classroom procedure page, you will find a number of suggestions for things you can add to or alter in your lesson plan. One option, for instance, is to allow students to go outdoors to collect some rock samples.

What our Geology lesson plan includes

Lesson Objectives and Overview: Geology explores the world of rocks and teaches students about the three main types. Students will discover what geology means and what a geologist is and does beyond just studying rocks. They will learn to identify and be able to list the traits of the three types of rock. This lesson is for students in 3rd grade and 4th grade.

Every lesson plan provides you with a classroom procedure page that outlines a step-by-step guide to follow. You do not have to follow the guide exactly. The guide helps you organize the lesson and details when to hand out the worksheets. It also lists information in the yellow box that you might find useful. You will find the lesson objectives, state standards, and number of class sessions the lesson should take to complete in this area. In addition, it describes the supplies you will need as well as what and how you need to prepare beforehand. The only supplies you will need in addition to copies of the worksheets are pencils, pens, or highlighters.

You may have some prep work to do ahead of time as well. If you want to, you could gather samples of each type of rock for students to study. You could also have students bring in rocks as mentioned in the “Options for Lesson” section.

There are a number of suggestions in the “Options for Lesson” section that you may want to incorporate into the lesson. Students could go outside to gather rock samples and identify which ones fall into each category. Another option is to have students bring in rocks from home prior to the start of the lesson. As an additional assignment, students could research the kinds of things people use rocks for, such as jewelry or building material for houses. You could also invite a geologist to speak with the class or have students research the career of a geologist. For a final activity, visit the Science Trek website (linked in the lesson plan), which offers a number of interactive science games that engage students in a deeper study of geology and rocks.

The paragraph on the teacher notes page provides a little extra information about the lesson. It explains that this lesson will provide a good foundation for understanding what geologists do and how they classify the rocks they find. It also suggests teaching the lesson in conjunction with others about similar topics. You can use the blank lines to write down any other thoughts or ideas you have as you prepare.

The Geology lesson plan contains four pages of content. The first page describes what geology is as a study of the Earth’s history and its physical features. Students will discover that there is more to this field than studying just rocks. In fact, studying rocks is just a small part of what geologists, those in the field of geology, do.

Rocks tell the story, so to speak, of how Earth has changed over time. Geologists can observe a rock and determine roughly when and where it formed. They can even measure how long it took the Earth to develop in geologic time. Geologic time began about 4 billion years ago. Even though most scientists believe the Earth has existed for longer than that, this point is the furthest back they have gotten.

When hot lava cooled and became solid, it marked the starting point for geologic time. The oldest rocks geologists have discovered are 4 billion years old, so that is when the clock starts for geologic time. But geologists study more than rocks. They try to figure out how Earth formed using the story rocks tell. Fossils, for instance, are the remains of plants and animals that once lived on Earth but died long ago. We can find their remains embedded in rocks.

The History of Geology

The lesson describes how humans have been fascinated by the origins of the Earth for a long time. We have also used the earth—such as rocks—for thousands of years. People used sharpened rocks for weapons and tools for centuries before the field of geology began to take shape. Historians believe the earliest study of the Earth started with the Greeks in the 4th century.

The Greeks realized that rocks were different from one another, and they asked why. They discovered minerals and rocks were different as well and that they had different uses. Around the same time, the Romans began to mine marble as a building material. Much later in the 17th century, scientists discovered fossils, which helped us understand Earth’s history a little more.

In the 18th century, mining became more prevalent as gold and silver became a significant part of the world’s economy. In the same century, scientists began to note that the Earth had layers. They argued between two main theories. One was that oceans deposited all the rocks after major flooding events. The other was that rocks formed by heat and fire.

Later, in the 19th century, a man named James Hutton proved that many rocks form as a result of volcanic reactions—heat, fire, pressure. More importantly, however, he claimed that these processes are continuous and occurring even today. (In modern times, geologists refer to this as the rock cycle.) Hutton is known as the Father of Modern Geology.

Students will learn a little more about the rock cycle and the three categories of rock that all rocks fall into: igneous, sedimentary, and metamorphic. James Hutton’s discovery is that rocks change constantly over time. They start deep below the Earth’s surface and slowly find their way to the surface over millions of years through volcanic activity.

Over time, rocks break down into smaller particles. They get buried beneath layers of soil, rock, and decayed plants. Through a process that takes millions of years, the layers deep below the Earth’s surface push up toward the surface through volcanic eruptions, and the process starts over again. This page provides a diagram that displays the rock cycle and the various factors involved.

Students will then learn about each of the three classes of rocks. Igneous rocks form from cooled lava after magma erupts from beneath the surface of the Earth. After the resulting lava cools, igneous rocks form. Sedimentary rocks form when sediment accumulates and hardens into rock over a long period of time. Finally, metamorphic rocks form as a result of intense heat and pressure. It can take millions of years to create a metamorphic rock.

In addition to studying rocks, geologists study landforms, climate change, and the effects of human activity on the Earth. They look for new energy sources by studying the patterns and formations of rocks. Some geologists even study rocks from space and compare them to the ones on Earth. They can even try to predict volcanic eruptions and earthquakes.

The Geology lesson plan includes three worksheets: an activity worksheet, a practice worksheet, and a homework assignment. Each one will help students solidify their grasp of the lesson content and apply what they learned. The guidelines on the classroom procedure page describe when to hand out each worksheet to the class.

HOW WE USE ROCKS ACTIVITY WORKSHEET

Students will work in pairs for this worksheet. They will find a few examples of each of the three types of rocks and list them in the table. Then they will describe one way people use that particular rock. The right column is for pictures. Students should paste a picture of the rock examples and write the name of the rock next to the picture. The worksheet provides one example for reference.

For the practice worksheet, students will test a single rock to determine its level of hardness. The worksheet explains that geologists can use a specific test to determine what type of rock they have. The test involves the Mohs Hardness Scale, where 1 is the lowest hardness and 10 is the highest. There is a diagram that shows some rocks and their respective levels. Talc, for instance, is at the top with a 1 hardness level. Diamond is at the bottom with a level 10 hardness. Students will need one large stone or rock and a large steel nail. Using the nail, they will press down on the rock as hard as they can. They will also try to draw a scratch in the rock. Steel has a hardness level of between 6 and 7. If students cannot scratch the rock, it means the rock is a higher level than 7. There are three questions that students must answer after they finish observing the rock.

The homework assignment requires students to get creative. They must choose one type of rock about which they will write a story. The story will be about how their rock travels through the rock cycle. You may benefit from explaining the rock cycle more thoroughly, or teaching the Rock Cycle lesson in conjunction with this one.

Both the practice and homework worksheets have answer keys in the lesson plan document. Note that the answer key for the homework simply provides a little more guidance on grading the assignment. For the practice answer key, students’ answers will vary, but the answer key provides a sample response for reference. If you choose to administer the lesson pages to your students via PDF, you will need to save a new file that omits this page. Otherwise, you can simply print out the applicable pages and keep it as reference for yourself when grading assignments.

FacebookTwitter
Be the first to review this item
Filter Reviews:
×
Clear filter
More Filters
A
10/27/2022
Anonymous

My experience with the product was great--however, I would recommend that you have an option to not post grade levels on materials. I work with students with moderate disabilities and use a range of grade level materials to fit their learning needs. I do not like to give students in high school materials that list "5th grade" or whatever the case may be. Other than this issue, I would strongly recommend your products and plan on purchasing the annual membership.

I love these lessons! I modify them a bit for my students but they sure make my job easier!

Geology and Rocks is great for Distance Learning!

I was looking for paper-based science instruction for 5th grade students. This was perfect for our quarantine time.

My kids loved learning about rocks. I can't keep them out of the house! lol

Easy to use, easy to understand