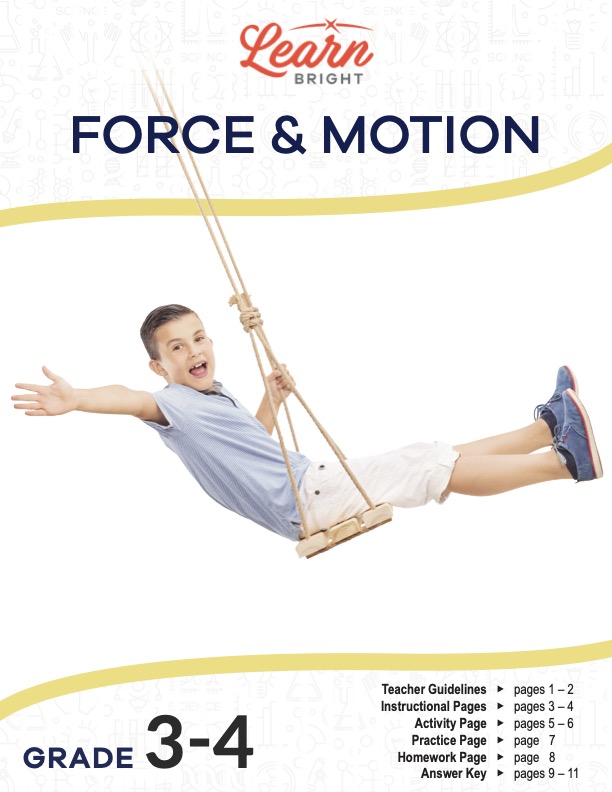 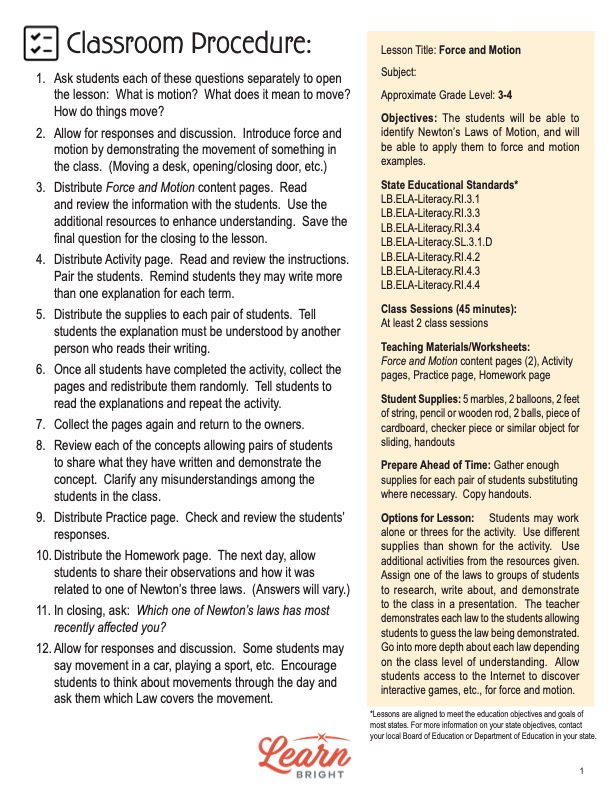 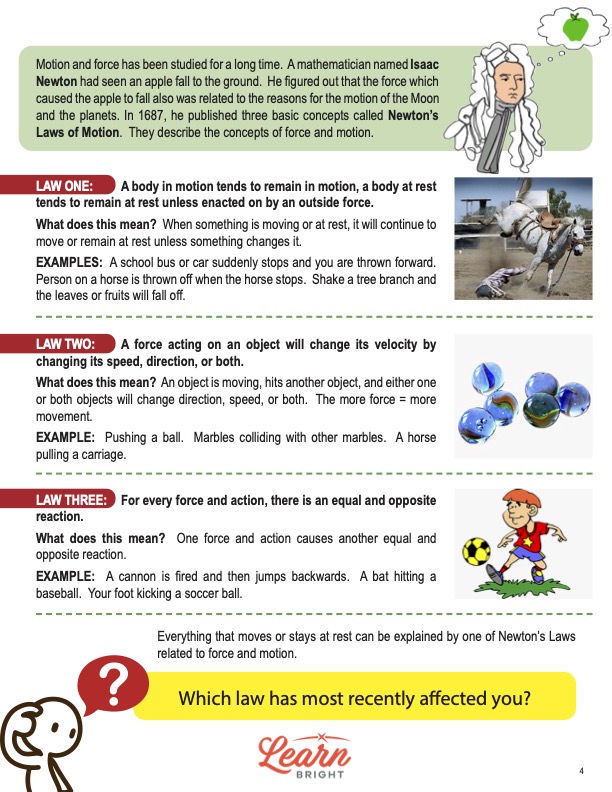 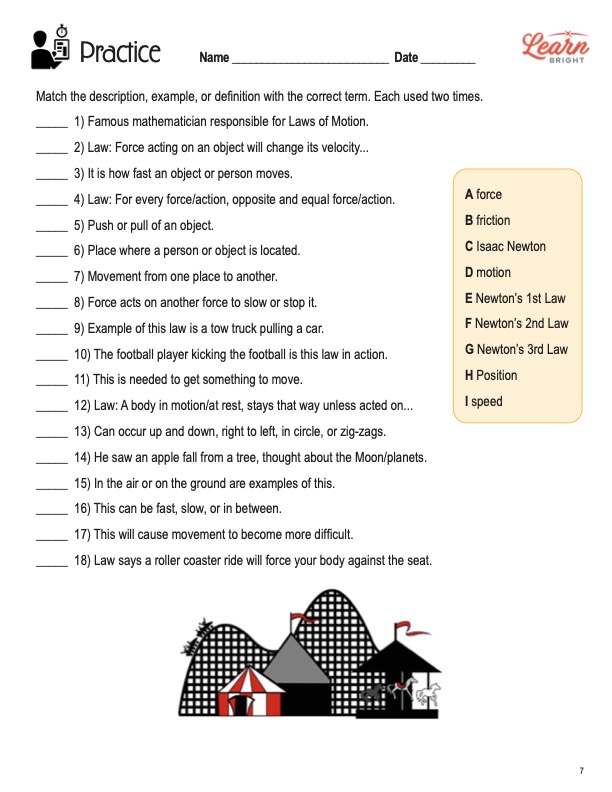 Force and Motion introduces students to the world of physics and Newton’s three laws of motion. Students will discover some of the basic principles of elementary physics. They will also be able to identify each of the three laws and apply the concepts to various examples.

There are several suggestions in the “Options for Lesson” section that you could incorporate into the lesson if you want. One idea is to demonstrate each law in some way and have students guess which law you are showing them. Another idea is to find online games that supplement learning about this topic.

What our Force and Motion lesson plan includes

Lesson Objectives and Overview: Force and Motion provides students with a basic level of understanding of the laws of motion. Students will discover how each of Newton’s three laws work and will be able to identify which law various examples demonstrate. This lesson is for students in 3rd grade and 4th grade.

Every lesson plan provides you with a classroom procedure page that outlines a step-by-step guide to follow. You do not have to follow the guide exactly. The guide helps you organize the lesson and details when to hand out worksheets. It also lists information in the yellow box that you might find useful. You will find the lesson objectives, state standards, and number of class sessions the lesson should take to complete in this area. In addition, it describes the supplies you will need as well as what and how you need to prepare beforehand. In addition to the handouts, you will need to supply five marbles, two balloons, two feet of string, a pencil or wooden rod, two balls, a piece of cardboard, and a checker piece or similar sliding object. The students will use these supplies during the activity portion of the lesson.

The “Options for Lesson” section of the classroom procedure page lists a number of suggestions for ideas and activities that you could add to the lesson. A few ideas relate to the activity itself. Students may work alone or in small groups for the activity instead of in pairs. You could also use different supplies for the activity worksheet. Another option is to assign one of the laws to different groups of students to research, write about, and demonstrate to the class during a presentation. You could also conduct some demonstrations yourself and have students guess which law you’re demonstrating. Go into more depth about each law, depending on your students’ level of understanding. One more idea is to allow students access to the internet to discover interactive games related to force and motion.

The teacher notes page provides an extra paragraph of information to help guide the lesson and remind you what to focus on. It reminds you that this is an elementary lesson on physics and provides students with a basic understanding of the topic using Newton’s laws of motion. You can look into other lesson plans that relate to the subject matter, such as Newton’s Laws of Motion, and use them in conjunction with this one. The blank lines on this page are available for you to write out thoughts and ideas you have as you prepare the lesson.

The Force and Motion lesson plan contains two pages of content. The first concepts students will learn about are motion and position. Things move in lots of different directions—up, down, left, right, in circles, and so on. Some objects move slowly while others move really fast. There are objects that move on their own and others that have to have some outside influence in order to move. Motion is the movement of something from one place to another.

The lesson offers a few real-life examples to help solidify this point. Swinging is both a back and forth and up and down motion. When riding on a merry-go-round, the motion is circular, going around and around in a circle. And if a group of people are playing a game of tag, those trying to avoid being tagged might adopt a zig-zag or random motion.

Motion is the movement of something, such as two people going up and down on a see-saw on a playground. While one person is in the air, the other is on the ground. Then they switch places or positions. Position refers to the place where a person or object is located. If that position changes, it means there is motion or movement.

Next, students will learn about force, speed, and friction. Many things that move around cannot move on their own. The push or pull required to move these objects is called force. Force is necessary to get something to move. For example, people have to use their muscles to help them move from place to place. Something like a door or wagon must be pushed or pulled to make them move. Otherwise, they would stay in the same place.

Along with motion comes the concept of speed. Speed refers to how fast or slow an object moves. While some things are easy to push or pull, there are times when doing so can be rather difficult. This is because of friction. Friction is a force that acts on another force to slow it down or cause it to stop.

When riding a bike, for instance, a person has to pedal to cause the wheels to turn so they can ride down a sidewalk or road. If the person stops pedaling, however, the tires will move more and more slowly until they eventually stop completely. This is because of the friction between the tires and the surface below them, such as concrete. As the tires rub against the concrete, friction slows the movement until it stops entirely.

A mathematician named Isaac Newton observed an apple falling from a tree to the ground. He figured out that the force that caused the apple to fall was related to the reasons for the motion of the moon and the planets. In 1687, he published three basic concepts, called the laws of motion, that delineate how force and motion work.

The second law states that a force acting on an object will change its velocity by changing its speed, direction, or both. In other words, if a moving object hits another object, one or both objects will change direction, speed, or both. On top of that, the more force there is, the more movement there will be.

The Force and Motion lesson plan includes three worksheets: an activity worksheet, a practice worksheet, and a homework assignment. Each one will help students solidify their grasp of the material they learned throughout the lesson. You can refer to the classroom procedure guidelines to know when to hand out each worksheet.

Using a collection of items you provide, students will describe the five terms on the first activity page and the three laws of motion on the second page. If they want, they can also sketch pictures to help explain the concept. Each explanation must include enough detail so that someone else can use their supplies to understand each concept based on the students’ explanation.

The practice worksheet lists 18 statements that relate to the lesson concepts. A word bank on the right-hand side lists nine options. Students will use each option twice as they match the definitions, examples, or descriptions to the options in the word bank.

For the homework assignment, students will review Newton’s three laws of motion. They will observe each law in action either inside or outside of their home. Using the chart on this page, they will write down what they observed and explain how it relates to that specific law. They can draw pictures or a diagram as well if they wish. Students should be as detailed as possible.

The last several page of the PDF document are answer keys for the activity and practice worksheets. The correct answers are in red to make it easy for you to compare them to students’ work. Given the nature of the activity, students may have varying answers than those on the answer key, which are sample responses. You may even want to use a few of these to demonstrate possible ways students can represent the concepts for the activity. If you choose to administer the lesson pages to your students via PDF, you will need to save a new file that omits these pages. Otherwise, you can simply print out the applicable pages and keep these as reference for yourself when grading assignments.

FacebookTwitter
Be the first to review this item
Filter Reviews:
×
Clear filter
More Filters
A
11/28/2022
Anonymous

It was just what I wanted and easy for me to use with my sped kiddos.

It was a great to read it and I cannot wait to use it. I hope everyone has a good year.

Loved the ideas and supplemental materials!

Excellent resource for classroom use!!!!

I love how easy this site is to use.