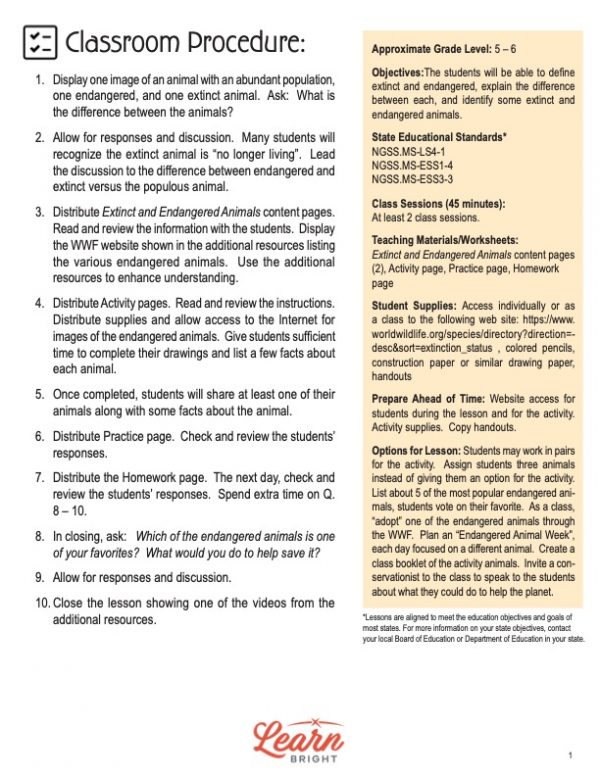 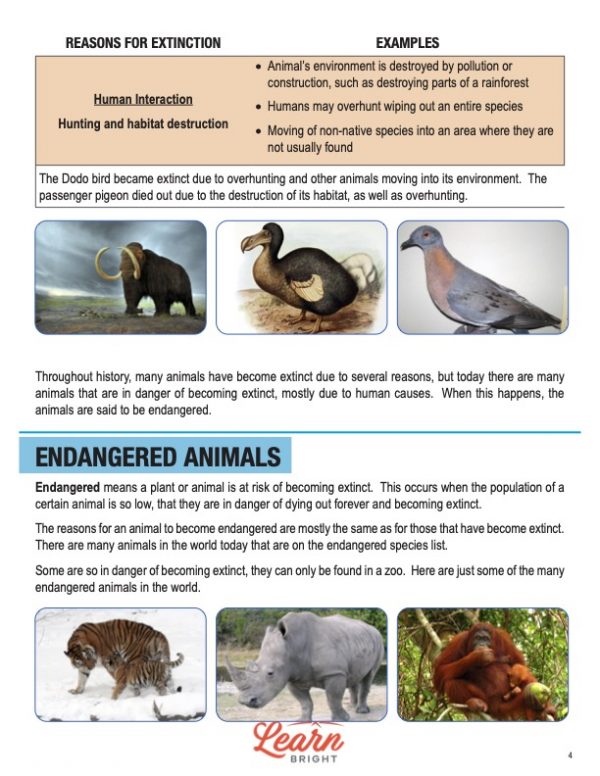 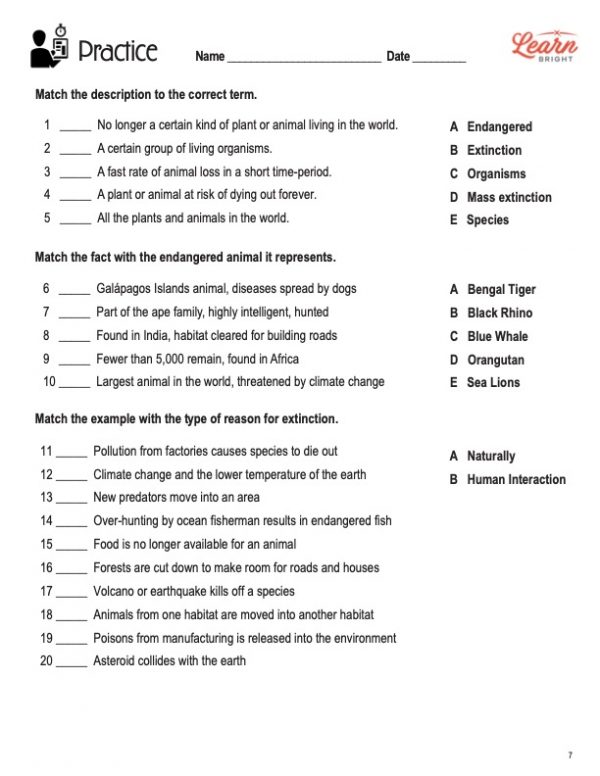 Extinct and Endangered Animals teaches students about what it means for an animal to be endangered or extinct. They will discover several examples of animals that fall into both categories. By the end of the lesson, they will be able to define and explain both terms.

There are additional suggestions listed in the “Options for Lesson” section that you can add to the lesson if you want to or have extra time. One such option you could do is “adopt” an endangered species through the WWF, or World Wildlife Fund.

What our Extinct and Endangered Animals lesson plan includes

Lesson Objectives and Overview: Extinct and Endangered Animals introduces students to the concept of how animals might die off or have died off. Students will discover the many ways in which animals have become extinct or how some are in danger of extinction. The lesson is for students in 5th grade and 6th grade.

Every lesson plan provides you with a classroom procedure page that outlines a step-by-step guide to follow. You do not have to follow the guide exactly. The guide helps you organize the lesson and details when to hand out worksheets. It also lists information in the yellow box that you might find useful. You will find the lesson objectives, state standards, and number of class sessions the lesson should take to complete in this area. In addition, it describes the supplies you will need as well as what and how you need to prepare beforehand. The supplies you will need for this lesson, in addition to the handouts, are colored pencils and construction paper or something similar. You will also need to ensure your students have internet access.

In the “Options for Lesson” section of the classroom procedure page, you will find a number of additional ideas for either alternatives to the lesson or extra activities. For this lesson’s activity, for instance, you could have students work in pairs. You could also assign them the three animals to research rather than allowing them to choose for themselves. One idea is to list five or so of the most popular endangered animals and have students vote on their favorite. Another idea that could be really exciting for the kids is to “adopt” one of the endangered animals through WWF. You could also plan an “Endangered Animals Week” and focus on a different animal each day or create a class booklet that includes all the students’ finished products for the activity. A final option is to invite a conversationalist to come speak to the class about how they can help the planet.

The paragraph on the teacher notes page provides a little extra information or guidance on the lesson. It explains that the list of endangered species changes from year to year. Therefore, you might find that the content pages exclude animals that are presently on the list or include animals that are no longer endangered. You can update the information where necessary in the content pages should they be outdated.

The Extinct and Endangered lesson plan contains two pages of content. The first page and a half focuses on extinction and the animals who fall into this category. The lesson introduces the concept by asking students if they have ever seen a real-life dinosaur. The answer will, of course, be no, because there are no dinosaurs on the earth any longer. They went extinct millions of years ago.

Students will learn that, at one time, there were living, breathing dinosaurs that lived on the earth. They are all gone today because they are extinct. If something is extinct, it no longer exists anywhere in the world. This can apply to plants as well, not just animals. Scientists believe many organisms died out when a large asteroid collided with earth, causing a mass extinction. A mass extinction is an event in which many species die and become extinct over a very short period of time. Normally, extinction of any species happens over a long period of time.

There are two primary categories of ways in which an animal or plant could die off. The first is naturally. Natural causes imply that the animal could not adapt to natural changes to the environment. The other way is through human interaction. This means that animals or plants die off because of hunting or human destruction of habitats.

The lesson provides examples of natural causes. Climate change occurred during the Ice Age, for instance, which was a period of time when the overall temperature of earth was lower. Another natural cause could be the lack of food that certain species need to survive. Or, if new predators move in to their environment, they might not be able to adapt in a way that protects them from these new threats. Wooly mammoths, for instance, died out 10,000 years ago because of a combination of climate change and the disappearance of their natural habitat.

As an example of human interaction, some animals’ environment might change negatively due to pollution or construction, such as deforestation. Humans may over-hunt, wiping out entire species as a result. Or, if humans introduce a new species to an area where they normally don’t live, it can disrupt the habitat and cause certain species to die. The dodo bird became extinct because of a combination of over-hunting and the introduction of new animals to their environment. Similarly, the passenger pigeon died out because people destroyed its habitat and over-hunted them.

Many animals are in danger of becoming extinct, mostly due to human causes. When this is the case, it means that the animal is endangered. This happens when the population of a certain animal is so low that they might die out forever. The reasons animals might enter this category is mostly the same as the reasons particular animals went extinct. There are so few remaining animals of some species that you can only find them at zoos!

The lesson lists five animals from the endangered species list and explains their situations. Black rhinos are from Africa. Hunting led to the decline of their population. Today, there are fewer than 5,000 left in the whole world. Orangutans are from Malaysia. They are very intelligent creatures from the ape family. Sadly, the loss of their habitat has led to their decline. They are also easy targets for hunters.

Bengal tigers are found mostly in India. Only around 2,500 survive in the wild as they have lost their habitat due to the development of roads throughout the areas they live in. Blue whales are the world’s largest animals. There are between 10,000 and 25,000 in the Gulf of California and a few other places. However, climate change, habitat loss, and poisonous substances in the water threaten their ongoing existence. Sea lions live in the Galápagos Islands in the Pacific Ocean. Their numbers have declined due to several reasons. In addition to climate change and food loss, non-native species like dogs that didn’t used to live in the area have spread diseases that the sea lions have contracted.

The lesson ends by explaining that there are ways to help protect the environments of plants and animals so that they do not become extinct or endangered. These actions include recycling, saving energy, planting a garden, or sponsoring an endangered animal.

The Extinct and Endangered Animals lesson plan includes three worksheets that will help reinforce students’ comprehension. Each worksheet will provide students an opportunity to showcase what they learned in different ways. The guidelines on the classroom procedure page outline when to hand out each worksheet to your students.

For the activity, students will choose three animals from the list of endangered species. In the chart, students will write each animal and answer four questions about each according to what they learn online about the animals. They will also include three interesting facts for each one. Using the construction paper, they will draw a picture of the animals they chose. They will then transfer the information they wrote on the worksheet to the construction paper. Each student can present their poster to the class and share what they learned.

The practice worksheet is split into three sections. Each section contains a number of descriptions or facts along with a word bank. The first section requires students to look at 5 definitions and match them to the correct term. In the second section, students will read through 5 facts and match it to the animal it represents from the word bank. The last section requires students to read through 10 examples of how animals might go extinct. They will then mark whether the reason was due to natural causes or human interaction.

Similar to the practice worksheet, there are three sections for the homework. The first section requires students to mark 10 animals as either extinct (X) or endangered (E). The next section requires them to fill in the blanks in 5 sentences using the terms in the provided word bank. Finally, they will respond to 5 prompts based on what they learned throughout the lesson.

The two pages at the end of the lesson plan are answer keys for the practice and homework worksheets. The answer key for the practice worksheet provides the answers in red. For the homework assignment, the answer keys for the first two sections are likewise in red. On the last section, the answer key lists the answers to the first two questions and then describes that the final three answers may vary. This is especially true of question four, which will essentially be students’ opinion. If you choose to administer the lesson pages to your students via PDF, you will need to save a new file that omits these pages. Otherwise, you can simply print out the applicable pages and keep these as reference for yourself when grading assignments.

FacebookTwitter
Be the first to review this item
Filter Reviews:
×
Clear filter
More Filters
A
11/28/2022
Anonymous

I found this material really useful and engaging.

I run a day camp and do a learning lesson based on a theme each week. I have loved the learning packets from Clarendon- it gives us material for a whole week!

I loved it! I modified the lesson. for kindergarten, but not by much. My students love the lesson and we're still using it weeks later, with tweaks to it, of course!