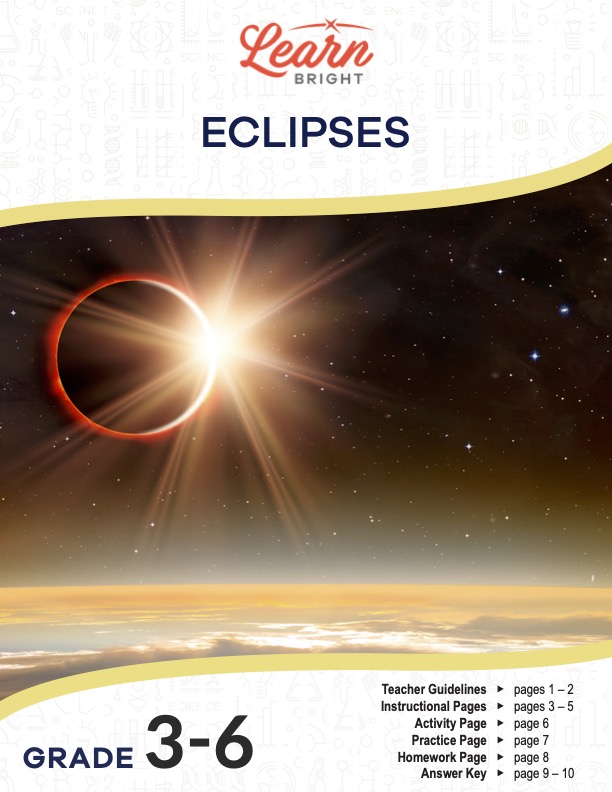 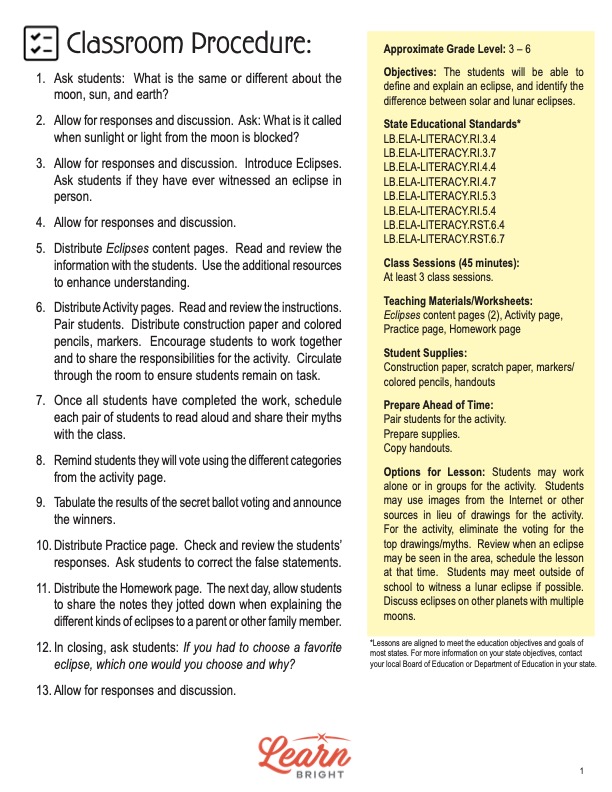 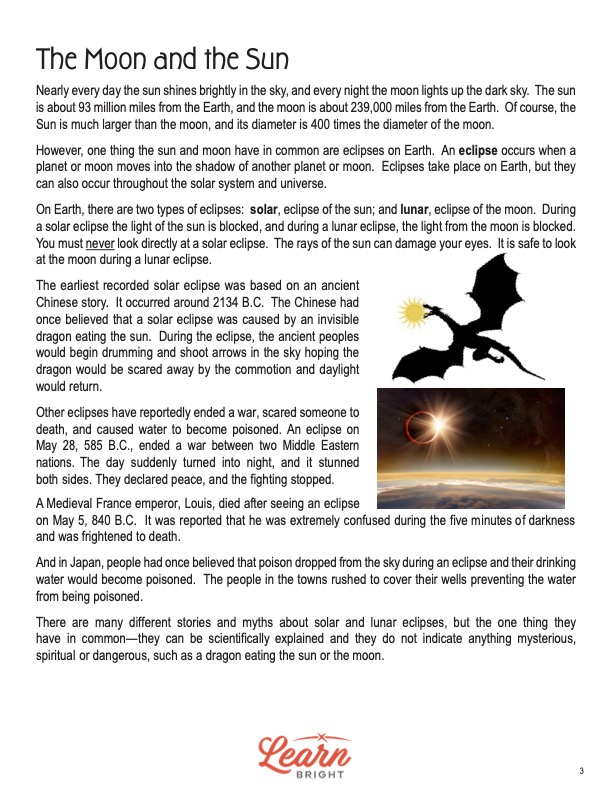 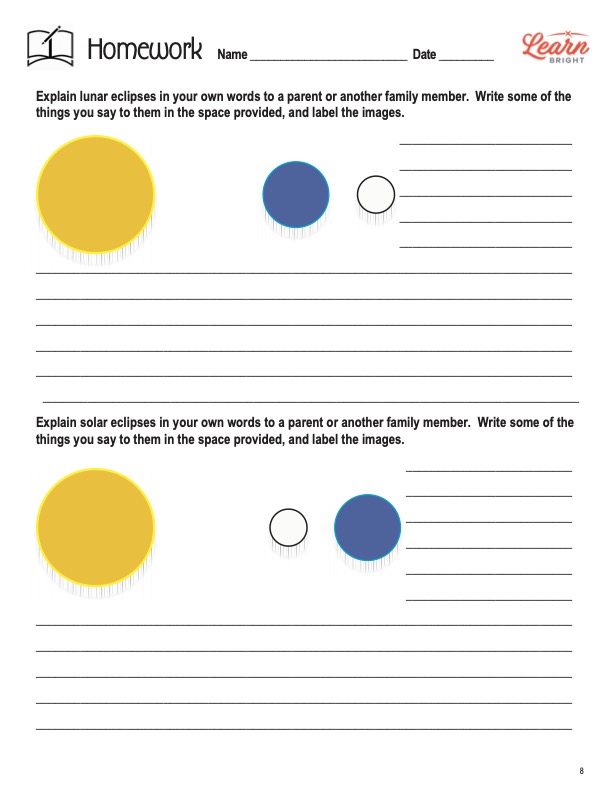 Eclipses introduces students to the concept of blocked sunlight or moonlight and how each one happens. Students will discover that an eclipse doesn’t last very long. They will also learn how often they occur and where to find information on upcoming eclipses.

There are several suggestions in the “Options for Lesson” section of the classroom procedure page that you can take advantage of if you want or have extra time. One suggestion is to review when an eclipse may occur in the area and schedule to present your lesson around that time.

What our Eclipses lesson plan includes

Lesson Objectives and Overview: Eclipses explores what happens when a planet or the moon blocks the light of the moon or sun. Students will discover the differences between a solar and lunar eclipse and learn how each one can occur. This lesson is for students in 3rd grade and 4th grade.

Every lesson plan provides you with a classroom procedure page that outlines a step-by-step guide to follow. You do not have to follow the guide exactly. The guide helps you organize the lesson and details when to hand out worksheets. It also lists information in the yellow box that you might find useful. You will find the lesson objectives, state standards, and number of class sessions the lesson should take to complete in this area. In addition, it describes the supplies you will need as well as what and how you need to prepare beforehand. This lesson requires construction paper, scratch paper, and markers or colored pencils for the activity.

The “Options for Lesson” section of the classroom procedure page lists several ideas for additional activities or alternate ways to go about the lesson. Some of the optional adjustments are related specifically to the activity portion. Students could work alone or in groups for the activity, instead of in pairs. They could use images from online or other sources instead of drawing their own. You could also eliminate the voting part for best drawing or myth. An optional addition to the lesson is to review when an eclipse will happen in your area and plan to deliver the lesson at that time so students can see it. You could also discuss how eclipses work on other planets that have multiple moons. One final idea is to have students meet outside to see a lunar eclipse if possible.

The paragraph on this page gives you some extra information regarding what to expect from the lesson. It suggests you incorporate a hands-on activity using a flashlight and various objects to demonstrate how eclipses work. It also mentions that you can teach this lesson in conjunction with others about the solar system or space. Use the blank lines to write out whatever ideas or thoughts come to mind as you prepare.

The Moon and the Sun

The Eclipses lesson plan contains three pages of content. Nearly every day, the sun shines brightly in the sky. And every night, the moon lights up the dark sky. The sun is roughly 93 million miles away from Earth. The moon is about 239,000 miles away. Of course, the sun is far larger than the moon. In fact, its diameter is 400 times the diameter of the moon.

However, both of these celestial objects have something in common: eclipses. An eclipse happens when a planet or moon moves into the shadow of another planet or moon. The two types of eclipses, then, are solar and lunar. They take place on Earth, but they also occur all throughout our solar system and the universe.

The earliest recorded solar eclipse was based on an ancient Chinese story. It occurred around 2134 B.C. The Chinese had once believed that a solar eclipse was caused by an invisible dragon that ate the sun. During the eclipse, the ancient peoples would start drumming and shoot arrows into the sky, hoping the commotion would scare the dragon away. Then daylight would appear once again.

Other eclipses have reportedly ended a war, frightened someone to death, and poisoned water. On May 28 in 585 B.C., an eclipse turned day into night while two Middle Eastern nations were fighting a war. The event stunned both sides. They declared peace and stopped fighting. An emperor of Medieval France named Louis witnessed a solar eclipse in 840 B.C. He was so confused during the five minutes of darkness that he frightened himself to death.

And in Japan, people had once believed that poison dropped from the sky during an eclipse. The people in the towns would rush to cover their wells and prevent the water from being poisoned. There are many different stories and myths about eclipses, but we can scientifically explain these events. Eclipses do not indicate anything mysterious, spiritual, or dangerous.

The word lunar refers to the moon. Lunar rocks, for instance, came from the moon. And a lunar eclipse is one that occurs when the light of the moon is blocked. Put another way, the sun’s light can’t reflect off the moon’s surface because the Earth blocks it. Because the moon orbits the Earth while the Earth orbits the sun, the Earth sometimes comes directly between the sun and the moon.

A lunar eclipse can only occur during a full moon. To illustrate the point, the lesson provides a diagram. It shows the sun, arrows represented by B, Earth represented by A, and the moon. A person standing on Earth at location A would see a total lunar eclipse. This is when the moon looks the most dark, but it won’t be fully dark due to refraction. Instead, the moon will give off a reddish color to the people on Earth.

The lesson explains that solar means sun. Solar energy, then, is energy from sunlight. A solar eclipse happens when the moon blocks the light of the sun. There are times when the moon completely blocks the sun and casts a shadow on the Earth. However, the Earth doesn’t become completely dark.

With a total solar eclipse, the three celestial bodies of the sun, moon, and Earth must directly align. The page shows another diagram to show what this looks like. In this case, a person standing on Earth (A) would experience a very dark sky as if it were nighttime. Unlike lunar eclipses, solar eclipses only last a few minutes.

A second type is the partial solar eclipse, which is when the sun, moon, and Earth are not directly aligned. Only a small part of the sun would cast a shadow on the Earth’s surface. Depending on where people are on the planet, some might see a partial eclipse while others see the total eclipse.

One more type of solar eclipse is the annular. This takes place when the moon is at its farthest from Earth. Since the moon seems so much smaller, the entire view of the sun isn’t blocked. Instead, the moon appears like a dark disc on top of the sun surrounded by the bright ring of the sun’s light. A solar eclipse of some kind occurs every 18 months.

The Eclipses lesson plan includes three worksheets: an activity worksheet, a practice worksheet, and a homework assignment. Each one will help students demonstrate what they learned in different ways and solidify their grasp of the material. Use the guide on the classroom procedure page to determine when to hand out each worksheet to the class throughout the lesson.

With a partner, students will create two stories or myths, one about the solar eclipse and one about the lunar eclipse. The worksheet outlines the steps students should follow as they work to complete their myths. As part of the activity, students should draw a picture to accompany each story. They can use rough drafts initially and then write the final draft on the pieces of construction paper you provide them. After all the students complete both myths, the class can vote on best, most creative, and more.

The practice worksheet is divided into two parts. The first part requires students to review 10 descriptions and decide which type of eclipse they relate to. The word bank lists the five possible options for them to choose from. For the second part, students will read 10 statements and determine whether each one is true (T) or false (F).

For the homework assignment, students will explain in their own words how lunar and solar eclipses work to a family member. Then they will write down some of the things they talked about and label the images on the worksheet.

The last pages of the PDF are answer keys for the practice and homework worksheets. All the answers are in red to make it easy to compare them to students’ work. For the practice worksheet, students’ responses should mirror the answer key exactly. However, given the nature of the homework assignment, students’ answers will vary but should include accurate descriptions and correct labeling. If you choose to administer the lesson pages to your students via PDF, you will need to save a new file that omits these pages. Otherwise, you can simply print out the applicable pages and keep these as reference for yourself when grading assignments.

Thank you for your amazing resources. These are just what we needed to consolidate what we have learned.