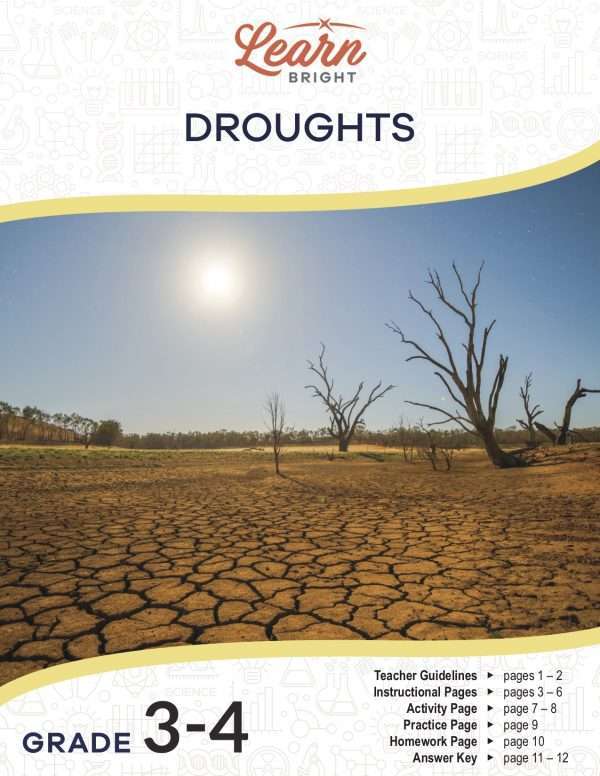 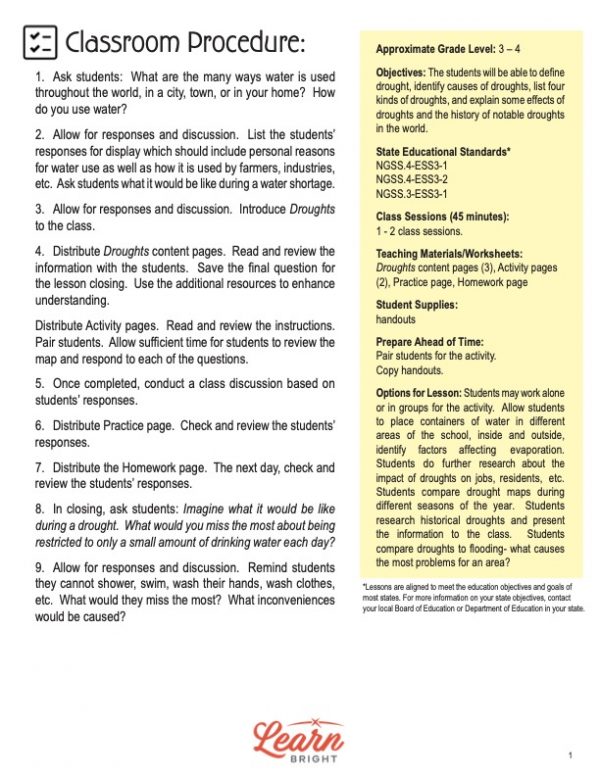 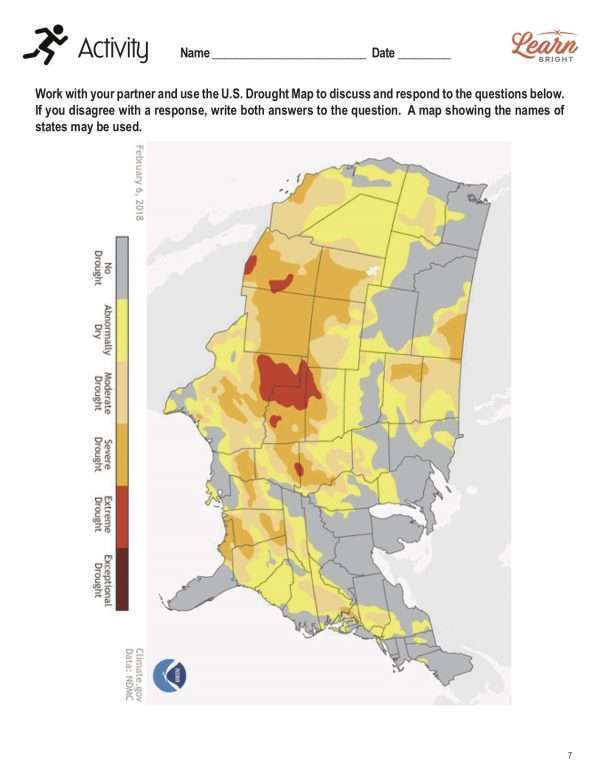 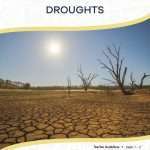 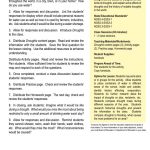 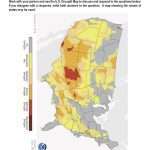 Droughts introduces students to this natural event and its causes and effects. Students will discover the four different types of droughts and how each one affects the environment, society, and economy.

The “Options for Lesson” section presents several suggestions that you can add to the lesson plan for your students. One option is to have students place containers of water in different areas inside and outside of the school and identify factors of evaporation. Another option is to have them further research how droughts could impact jobs, residents, animals, and more. Students could also research historical droughts and present their findings to the class.

What our Droughts lesson plan includes

Lesson Objectives and Overview: Droughts teaches students all about the causes and effects of droughts. Students will identify four different types of droughts and explain some of their effects. They will also be able to describe some notable droughts from the world’s history. This lesson is for students in 3rd grade and 4th grade.

There is an “Options for Lesson” section that lists a number of suggestions for activities to add to the lesson or alternate ways to approach aspects of the lesson. One option is to let students place containers of water in various areas of the school, both inside and outside. They could then record what they observe over a set period of time and identify factors that affect evaporation. Another option is for students to further research the impact that droughts can have on things like jobs, residences, and so on. As another task, students could compare drought maps of the same area during different seasons of the year or research historical droughts. One more option is to have students compare droughts to flooding and decide which disaster causes the most problems in an area.

The teacher notes page has a paragraph of extra information or guidance for the lesson. It suggests teaching this lesson in conjunction with others about weather, natural disasters, or similar topics. You can use the blank lines to write down any other thoughts you have as you prepare the lesson for your students.

What Is a Drought?

The Droughts lesson plan contains four pages of instructional content. Before students learn what a drought it, the lesson outlines some facts about water. Water covers 70% of the earth’s surface. However, some places have a lot more water than others, such as locations with lakes and rivers or those near an ocean. And these bodies of water replenish regularly from rainfall, runoffs, and underground water sources.

On the other hand, some areas of the world don’t receive any water for long periods of time. But when a place that normally gets water does not receive any for a while, it means there is a drought. This means that a month without rain may be a drought in one area that usually receives rain constantly. In another area, though, a month without rain is completely normal, and it wouldn’t necessarily equate to a drought.

A drought is basically a relatively long period of time when there isn’t enough water because of dry weather. These periods have negative effects on humans, animals, and plants. For instance, farmers who rely on rain for their crops would suffer greatly if the area experiences a drought and the crops receive no rainfall.

Students will learn that droughts cause issues when the lack of water affects the usual water supply for things like irrigation or industrial needs. Droughts that last a really long time can become natural disasters, just like a hurricane or tornado, because there is no water to go around. Everything needs water to survive.

The lesson explains that not all droughts are the same. There are four types, each one with its own unique qualities: meteorological, agricultural, hydrological, and socioeconomic. The third content page outlines the causes of each type and the conditions required to classify a drought as that type.

Meteorological droughts include dry winds, high temperatures, and no humidity. We characterize this type of drought by a lack of moisture in the weather or lack of precipitation. If these conditions last too long, they can lead to a water crisis, but they can begin and end quickly.

We characterize agricultural droughts by reduced moisture in the atmosphere and negative effects on soil moisture. This type affects crops and animals and present the same effects as meteorological droughts. In addition, this kind of drought can often lead to food shortages, especially when it comes to the food items that come from farms.

When a decrease in precipitation in an area leads to a deficiency in surface water and groundwater supply, we call it a hydrological drought. Farming and energy begin to rely too much on the surface water or groundwater because there isn’t enough precipitation. Although these droughts don’t occur at the same time as the meteorological type, they can result from one.

The last type students will learn about is socioeconomic. It takes a long time for a drought to get to this point and a long time for an area to recover from it. We characterize these droughts by a reduction in the supply of goods and services such as energy, food, and drinking water. Growing populations or excessive demands on those supplies can create stress on the small amount of water that is available.

Just as there are several kinds of droughts, there are also several different effects. Apart from the shortage or lack of drinking water, droughts can have three major consequences: environmental, economic, and social. Environmental effects include lower water levels, increased water pollution, dried out wetlands, more frequent and larger fires, and unhealthy trees and plants. In addition, they can also cause a loss in biodiversity and an increase in the appearance of pests and diseases.

Economic effects include agricultural losses, lower game and fishing output, and higher costs of food production. They also include lower energy levels in hydroelectric plants, losses in tourism, and losses in the industries that rely on water for production.

Finally, social effects of droughts include a negative effect on people’s health and increased pollution. They can also cause an increase in food costs, stress, and an increased gap between developed and developing countries.

Droughts have occurred throughout history and happen naturally as a result of the climate in most parts of the world. One drought is linked to hunter-gatherer migrations in 9500 BC Chile. Another historical drought in India in 1900 killed anywhere between 250,000 and 3.25 million people. From 1921 to 1922, a drought in the Soviet Union led to the deaths of 5 million people from starvation.

Most recently, the Millennium Drought in Australia lasted for 13 years beginning in 1997. It led to a water crisis across much of the country. Eventually, people built desalination plants for the first time in order to process salt water into drinking water because there wasn’t enough precipitation or fresh water from other sources. This drought finally ended in 2010.

The Droughts lesson plan includes three worksheets: an activity worksheet, a practice worksheet, and a homework assignment. Each one will help students solidify their comprehension of the lesson content and demonstrate what they learned. The guidelines on the classroom procedure page outline when to hand out each worksheet to the students.

Students will work with a partner to complete the activity worksheet. (You may have them work by themselves or with a group instead if you prefer.) Students will use the drought map of the U.S. to discuss and respond to the questions on the second activity page. If they disagree with a response, they should write both answers to the question. You might also want to provide a map that labels the states to assist them in answering some of the questions. There are a total of 10 questions on this worksheet.

The practice worksheet is divided into two sections. For the first section, students must match statements to the correct type of drought. The options are meteorological (M), agricultural (A), hydrological (H), and socioeconomic (S). There are 15 questions in this section. For the second part, students must mark five questions true (T) or false (F).

Similar to the practice worksheet, the homework assignment contains two parts. For the first section, students must identify each drought effect as environmental (E), economic (EC), or social (S). The second part requires students to answer eight questions that relate to what they learned from the lesson material.

The final four pages of the lesson plan document are answer keys for the three worksheets. There may be some variation in students’ responses for some of the questions on the worksheets, particularly for the activity and possibly the second part of the homework page. The correct answers are in red to make it easy to compare them with students’ responses. If you choose to administer the lesson pages to your students via PDF, you will need to save a new file that omits these pages. Otherwise, you can simply print out the applicable pages and keep these as reference for yourself when grading assignments.