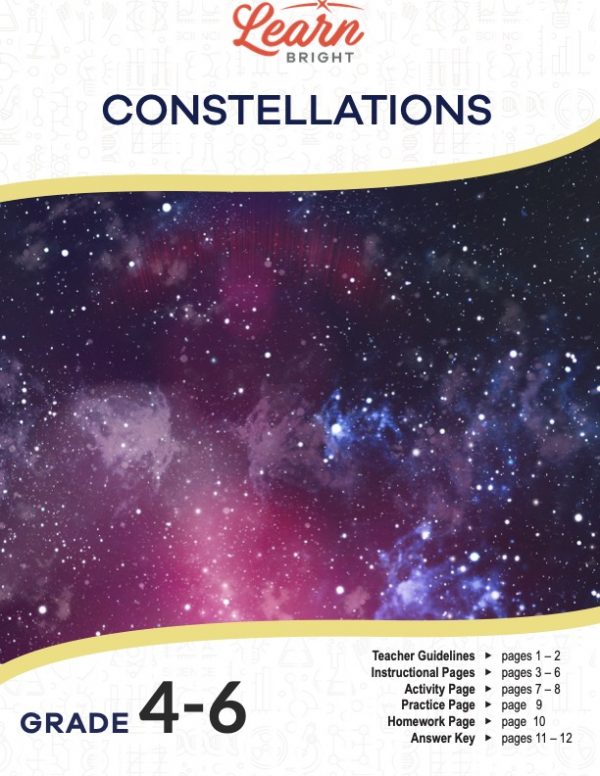 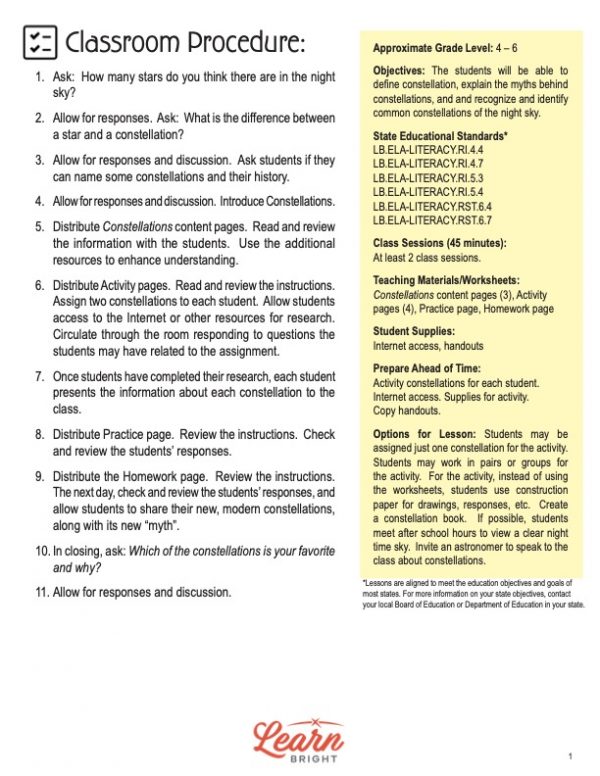 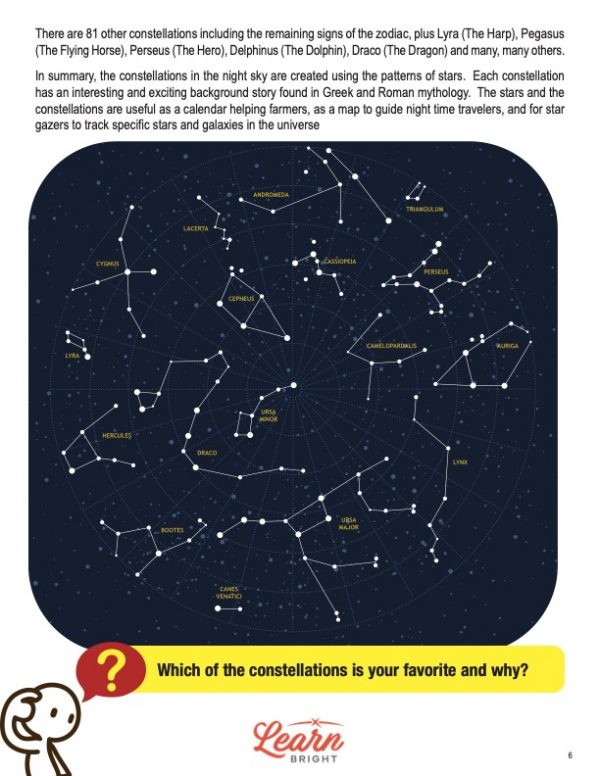 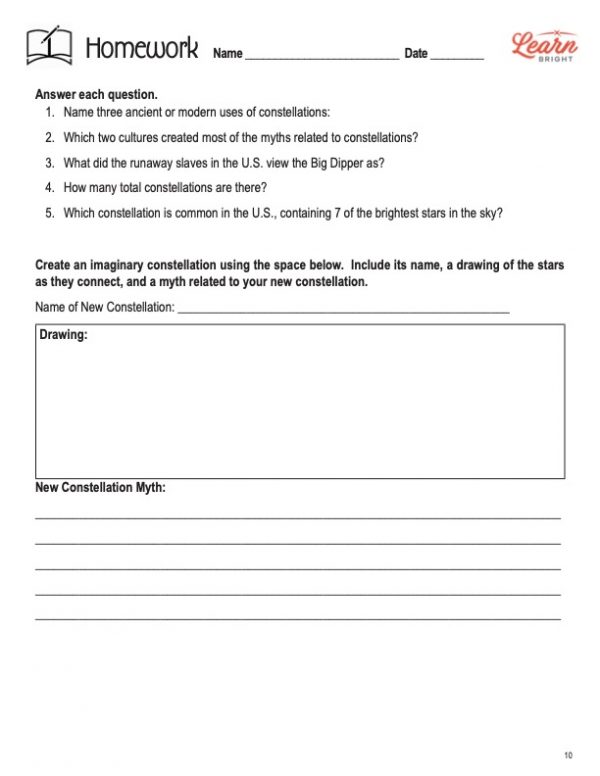 Constellations introduces students to the history of the stars and why people chose to name certain patterns. Students will learn about several specific star patterns and what they look like. They will also discover that the names of constellations tie to mythical stories about heroes, gods or goddesses, or creatures.

The “Options for Lesson” section provides several suggestions for additional activities or tasks that you could incorporate into the lesson. One suggestion is to have students meet after school if possible to observe a night sky and try to find various constellations.

What our Constellations lesson plan includes

Lesson Objectives and Overview: Constellations explores the history and uses, both ancient and modern, of these special star patterns in the sky. Students will discover facts about some famous constellations and be able to describe the myths behind them. This lesson is for students in 4th grade, 5th grade, and 6th grade.

There are a number of suggestions in the “Options for Lesson” section that you can consider including with the lesson plan. A few options relate specifically to the activity worksheet. One suggestion is to allow students to work in pairs or groups for the activity or to have students research only one constellation. Another is to use construction paper instead of the worksheet so that students have more room to work with for their presentations. Another option is to create a constellation book. You could also have students meet during after school hours if possible to view a clear night sky and try to identify various patterns. One last option is to invite an astronomer to speak with the class.

The Constellations lesson plan has four pages of content. The first page provides a little background information on the Milky Way galaxy and stars in general. The Milky Way is home to earth’s solar system, but it also contains over 300 billion stars. Astronomers believe the number of galaxies in the universe exceeds 100 billion. That means there are trillions of stars throughout the universe, about 70 billion trillion, which is 7 with 22 zeros!

Students will discover that not every star is visible, especially with the naked eye. What people can see on a clear night is around 4,500 stars. Some of them have their own systems of planets, and some are very old. Then there are some that no longer exist, but remain visible because the light is still traveling toward earth.

The brightest stars form special patterns in the sky. These patterns form shapes of people, animals, and mythological beings. Early astronomers called these patterns constellations. Each star in the pattern connects to form a different constellation. The ancient Greeks and Romans created stories around these different patterns of stars. We call these stories myths.

Generally speaking, constellation myths relate to gods, heroes, and creatures like serpents and bears. In 1922, the sky was divided into 88 total patterns. For the most part, these patterns appear to be a series of straight lines. People used their imaginations to create the images that these simple lines would represent.

Other cultures have created their own myths that relate to the constellations. Some were religious in nature, some helped people explain daily events, and others related to a specific hero. For instance, a hero was given a special place of honor in the sky as a tribute or reward for his heroism.

There are both ancient and modern uses for the constellations. These patterns helped ancient farmers know when to plant and harvest their crops. They were essentially a calendar in the sky. Travelers also use them to navigate from one place to another, relying on different stars to guide their journeys throughout the world. Today, modern astronomers and star gazers use them to keep track of specific stars. They also use them to locate other objects, such as galaxies or nebulae, which are areas clustered with gas and dust.

Every constellation has a name, and some have more than one name depending on the culture. The Big Dipper, for instance, is known as a plough in Great Britain and a saucepan in France. The Mayans referred to it as Seven Macaw, and the Hindus saw seven wise men. Runaway slaves in the U.S. considered the Big Dipper a symbol of freedom because they followed it on their journey to the North.

Students will then learn about specific star patterns. There are 88 total constellations in the night sky. Not all of them are famous or as popular or well used as others. Many are visible in the Northern Hemisphere but not in the Southern Hemisphere, and vice versa. Some are only visible during certain times of the year.

The lesson provides facts about seven specific constellations: Andromeda, Cancer, Cygnus, Hercules, Orion, Taurus, and Ursa Major. Andromeda is the furthest object can people can see with the naked eye. The Greeks named this constellation after mythical Princess Andromeda, famous for her beauty, who married Perseus. The image is of a woman hurling across the night sky.

Cancer is one of the dimmest star patterns. It is one of the signs of the zodiac. In fact, every zodiac sign is a constellation. The word means “crab” in Latin. Cygnus often goes by another name, Northern Cross. Its Latin name stands for swan, hence the constellation’s image. It is also the brightest overall constellation in the sky. Hercules is one of the largest constellations, but the stars that make up the pattern are dim. Several planets are visible within the pattern.

Orion mainly consists of bright blue supergiant stars. Three stars form what we call Orion’s Belt, which lead to Sirius, the brightest star in the sky. Orion was a giant hunter in Greek mythology who defended himself from Taurus. Taurus is a large pattern as well that people may have first identified over 10,000 years ago. It looks like the image of a bull, hence its Latin name which means bull. Ursa Major is Latin for “great bear” and relates to Ursa Minor, or little bear. Other constellations include Pegasus, Draco, and Delphinus.

The Constellations lesson plan includes three worksheets. Each of these worksheets help students better grasp the material and concepts they learned throughout the lesson. You can refer to the guide on the classroom procedure page, which outlines when to hand out the worksheets to your students.

For the activity, you will assign students two constellations to research either online or using other resources. Students will discover various facts and complete a number of prompts for each one. They will need to name a few of the stars within the pattern, write the best months of the year to see it, and list two facts that are not related to mythology. They will then summarize the myth behind it, draw the pattern connecting the stars, and finally do their best to draw the image that matches the myth.

FILL IN THE BLANK PRACTICE WORKSHEET

The practice worksheet is split into two sections. The first section requires students to fill in the blanks in 14 sentences. Students will use the terms in the word bank at the top of the page. For the second section, students will match the names of seven constellations to the correct image. The worksheet does not actually have pictures for this section. Instead, it simply names what the images look like. For example, they list things like “swan” and “crab.”

There are two parts of the homework assignment as well. The first part requires students to answer five questions about the lesson material. The second part involves creating a whole new constellation. Students will draw a picture in the empty box on the worksheet and come up with a name and a mythical story. They will use the lines at the bottom of the page to write out the myth.

The last couple pages of the lesson plan are answer keys for the practice and homework worksheets. The answers are in red for both handouts. The second part of the homework assignment does not have answers since it does not test students’ knowledge of the material. You can determine whether or not the students receives credit for this part of the assignment using your own judgment. If you choose to administer the lesson pages to your students via PDF, you will need to save a new file that omits these pages. Otherwise, you can simply print out the applicable pages and keep these as reference for yourself when grading assignments.

Well done, but could be linking more resources.

The lesson is well developed and the activities are sequenced nicely. I feel the alternative activities could add some links to direct the user to other lessons or resources, such as indigenous interpretations of the constellations in various cultures.

My kids understand and are engaged when I used this lesson. The activities are easy but hands on.

Out of this world!

Excellent! I love your products.

Out of this world!

Excellent! I love your products.

Great! Kids loved it and so did I.