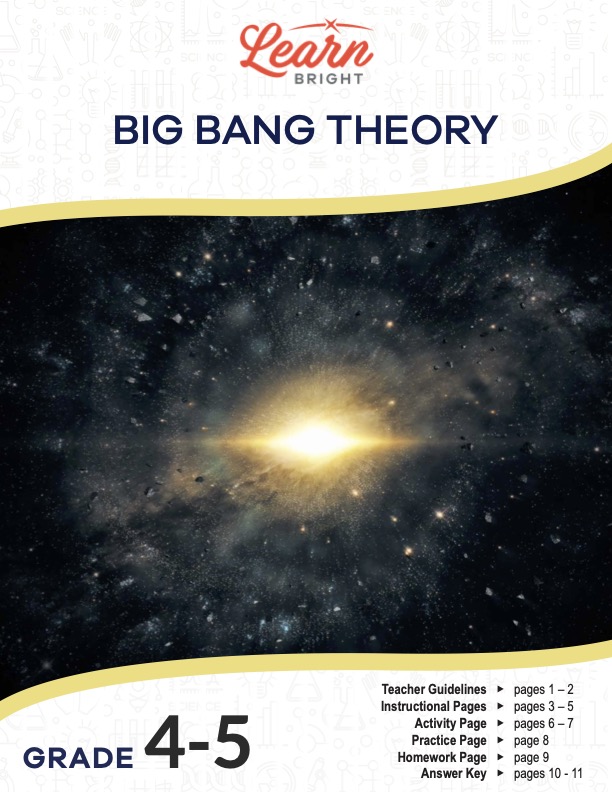 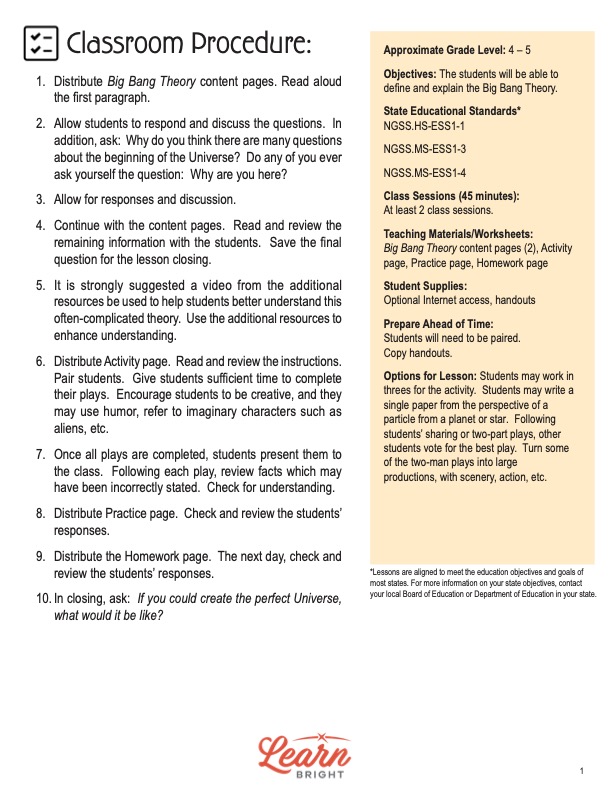 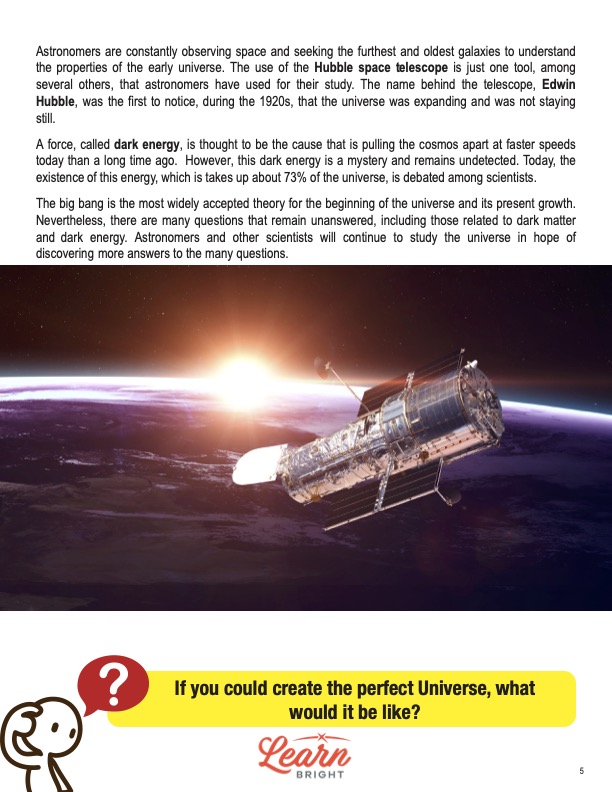 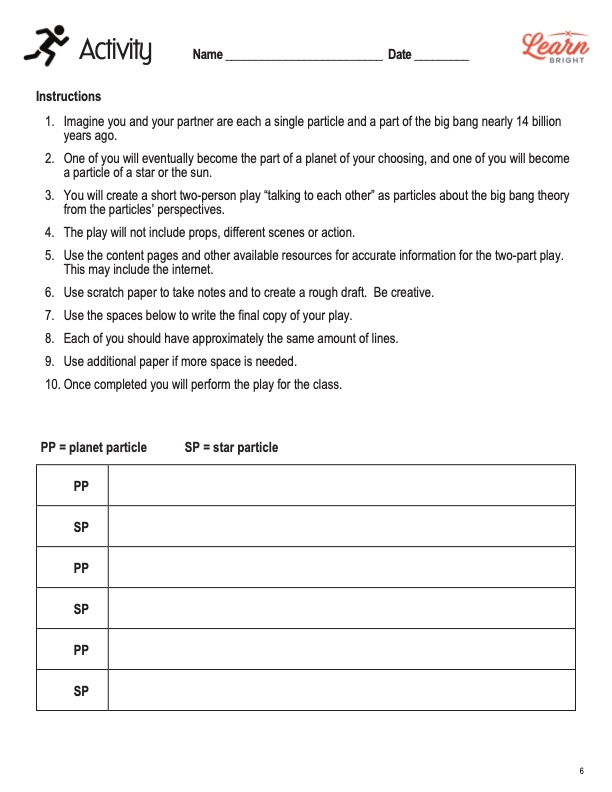 Big Bang Theory introduces students to a popular idea about how the universe came into being. Students will discover some of the popular opinions that relate to the theory. They will also learn how certain concepts, such as gravity, might have played a part in how the stars and planets formed.

The “Options for Lesson” section of the classroom procedure page list a few ideas for activities or tasks that you could add to the lesson if you have time or want to extend it. One idea, for instance, is to hold a vote after students present their plays for best, most creative, etc.

Lesson Objectives and Overview: Big Bang Theory teaches students about the most popular idea to explain how the universe formed. Students will discover some of the ideas the theory includes, like that the universe began to form from a single atom at the beginning of time. They will also learn how various concepts like cosmic microwave background radiation contribute to the validity of this theory. This lesson is for students in 4th grade and 5th grade.

Every lesson plan provides you with a classroom procedure page that outlines a step-by-step guide to follow. You do not have to follow the guide exactly. The guide helps you organize the lesson and details when to hand out worksheets. It also lists information in the yellow box that you might find useful. You will find the lesson objectives, state standards, and number of class sessions the lesson should take to complete in this area. In addition, it describes the supplies you will need as well as what and how you need to prepare beforehand. For this lesson, students need access to the internet for the activity portion.

There are a few suggestions in the “Options for Lesson” section of the classroom procedure page that you could incorporate if you wish. One idea is to allow students to work in small groups for the activity instead of in pairs. (You can adjust the activity instructions accordingly.) After students complete their plays, you could have them vote for the best or most creative play among the class. Another option is for students to write a paper from the perspective of a particle from a planet or star. One more idea is to turn some of the two-person plays into large productions with scenery, actions, and so on. If you choose to do this, consider having students extend the stories and assigning students to work on props, work on costumes, or other roles related to the play.

The teacher notes page provides an extra paragraph of information to help guide the lesson. This paragraph explains some of the key content that you will teach students as you deliver the lesson. It suggests that you take advantage of other resources online or elsewhere that provide more information on the Big Bang Theory. You can use the blank lines to write down ideas or thoughts you have about the topic as you prepare the lesson for the students.

Basics of the Big Bang

The Big Bang Theory lesson plan contains a total of three pages of content. To start off, the lesson describes how scientists have wondered how the Earth, moon, planets, starts, and galaxies formed. In fact, lots of different experts have studied and researched this subject for a long time. The big bang theory is one answer that many scientists agree with. It happens to be the most popular theory related to the beginning of the universe.

A priest named Georges Lemaître was the first person to suggest the theory in the 1920s. His theory stated that the universe began from a single atom at the beginning of time. Lemaître believed that nearly 14 billion years ago, the universe did not necessarily explode, but expanded in a fraction of a second. The occurrence produced two things that are required to make virtually everything: energy and matter. The matter was very dense and incredibly hot.

Students will learn that from this small start, the universe expanded very quickly. The expansion began to slow eventually, but matter continued to be destroyed in the process. Energy produced new particles, and the leftover matter eventually became the stars, planets, and other space particles. According to the big bang theory, the universe is still expanding today.

Evidence of the Big Bang

Prior to the big bang, scientists are not really sure what exactly happened. However, about 14 billion years ago, the universe began its growth. The result is what we see today. Scientists have tried to work backwards to discover and explain the big bang theory. They have gathered plenty of evidence and information about outer space.

For instance, they know galaxies are moving away from us. The ones that are further away are moving faster than those closer to us. We can prove this idea by analyzing a normal explosion. The objects that move the fastest end up the furthest away from the explosion. Scientists have also detected cosmic microwave background radiation (CMBR), which is leftover heat from the original explosion or expansion.

The Formation of Stars and Planets

The objects in space, including the stars, all formed when the particles and gases from the expansion pulled together through gravity. When gravity pulls particles and gases together, it results in extreme heat that allows nuclear reactions to begin. Energy gets released, and the star remains hot. When gravity pulls smaller amounts of dust and gas, we end up with planets to orbit the bigger star.

The Earth’s solar system formed this way about 4 or 5 billion years ago, which is 9 billion years after the formation of the universe. Astronomers believe the Earth’s sun to be about halfway through its current stable phase. Eventually, it will die out as it progresses through the stages of its life. That won’t happen for another 5 billion years or so. Our star is only one of about 100 billion in the Milky Way galaxy.

Students will learn a little about the Hubble space telescope in this lesson as well. Astronomers observe space constantly and seek the furthest and oldest galaxies. The Hubble scape telescope is one of many tools they use to accomplish this goal. The name behind this telescope, Edwin Hubble, was the first person to notice that the universe was expanding rather than staying still.

The last thing students will learn about in the lesson is dark energy (or dark matter). Dark energy is a force that scientists believe causes the cosmos to pull apart at faster speeds today than it did a long time ago. However, scientists still don’t know much about dark energy, even though it makes up 73% of the universe. Technically, its existence is a topic of debate among scientists.

The Big Bang Theory lesson plan includes three worksheets: an activity worksheet, a practice worksheet, and a homework assignment. Each one helps solidify students’ grasp of the lesson material and helps them demonstrate their knowledge in different ways. Use the guide on the classroom procedure page to determine when to hand out each worksheet to the students.

Students will work with a partner to create a short story or play. One person will take the part of a planet particle while the other takes the part of a star particle. Eventually, the planet particle will become part of a planet and the star particle, part of a star. Students will create a dialogue between the two particles that discusses the Big Bang Theory from their perspectives. The play will not include props or scenes. (See the “Options for Lesson” section for optional adjustments to this activity.) Students can use the content pages and other available resources to find information to include in their play. They can write out a rough draft and take notes on separate paper and use the worksheet to write the final copy. You can copy extra sheets of the second worksheet page if needed. Each person should have roughly the same amount of lines. After all students complete their plays, they can present them to the class.

For the practice worksheet, students will answer 18 questions based on information from the content pages. The types of questions vary and include true or false, naming, and fill in the blank. You may or may not choose to allow students to use the content pages for reference. This practice page could work as a quiz if you like.

EXPLAIN AND FILL IN THE BLANK HOMEWORK ASSIGNMENT

The homework assignment is split into two short sections. The first section requires students to explain the meaning of three numbers as they relate to the Big Bang Theory. For the second section, students will fill in the blank for 11 sentences. There is no word bank with the correct terms. Similar to the practice worksheet, you could choose whether or not to allow students to reference the content pages to complete the assignment.

The final two pages of the lesson plan document are answer keys for the practice and homework worksheets. All the correct answers are in red to make it easier for you to compare them to students’ responses. For the most part, students’ work should match the answer keys. However, given the nature of some of the questions on these assignments, there may be some variation. If you choose to administer the lesson pages to your students via PDF, you will need to save a new file that omits these pages. Otherwise, you can simply print out the applicable pages and keep these as reference for yourself when grading assignments.

FacebookTwitter
Be the first to review this item
Filter Reviews:
×
Clear filter
More Filters
A
03/27/2022
Anonymous

Excellent resource for a beginning teacher.

It is a great LP and worth adding to my lesson material supply.