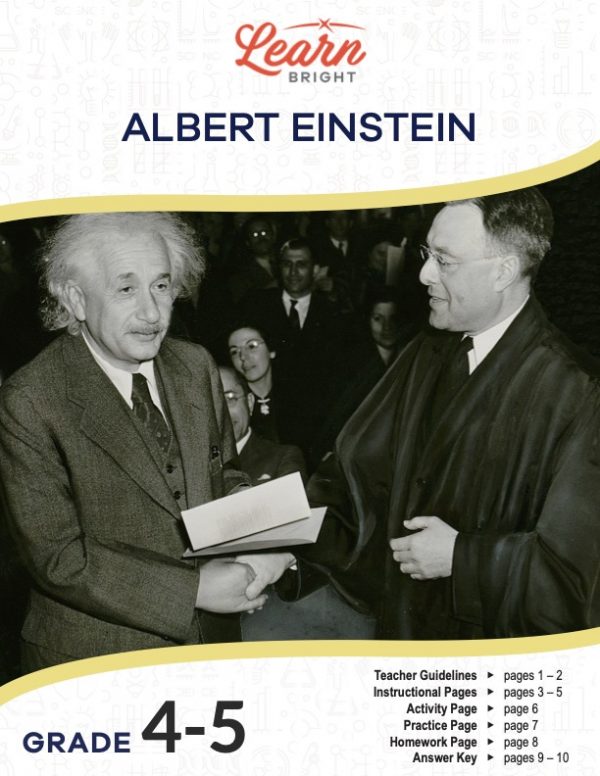 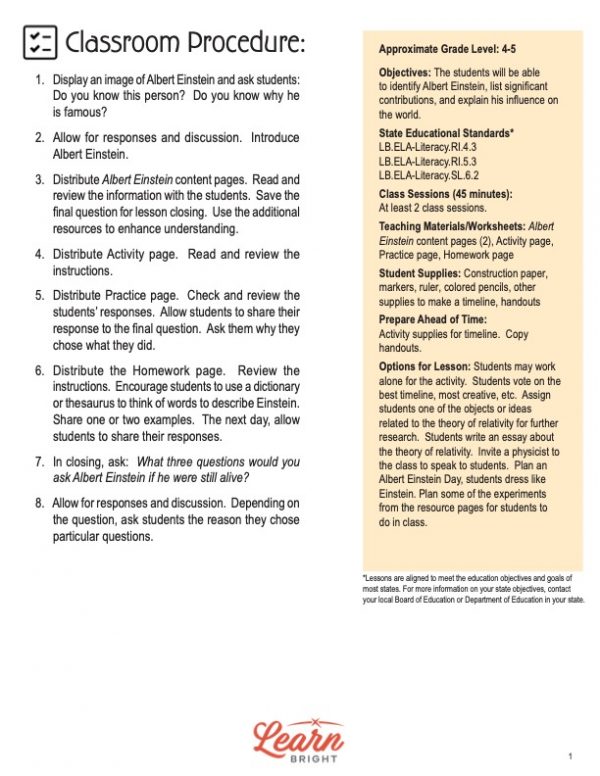 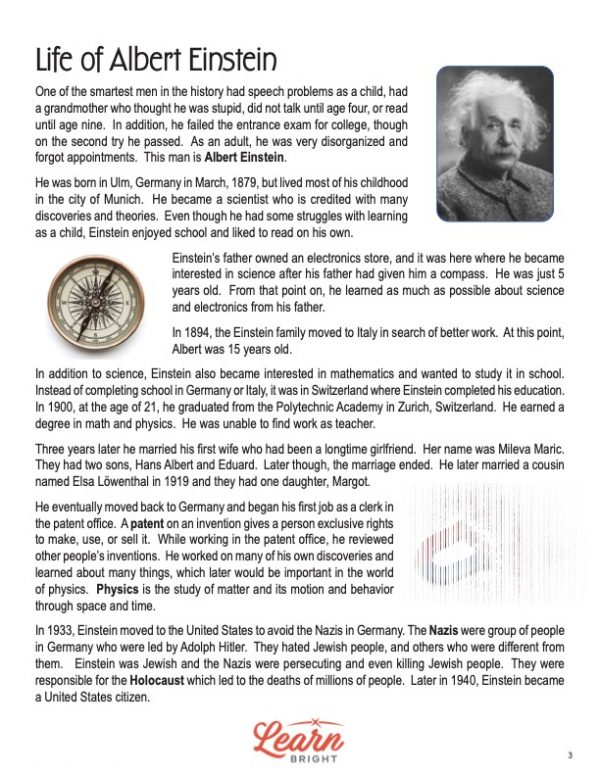 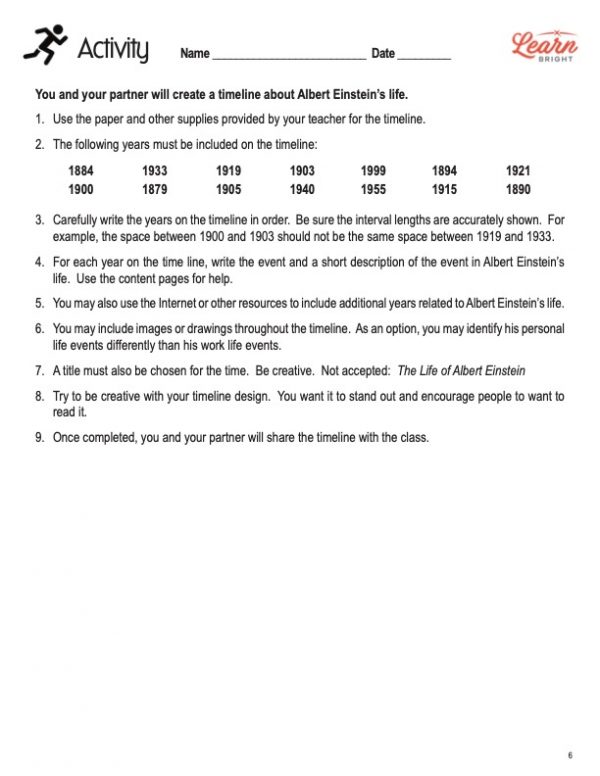 Albert Einstein introduces students to the life and accomplishments of one of the most famous scientists in history. Students will learn about his theory of relativity and other significant contributions that Einstein made to the world of science.

The “Options for Lesson” section on the classroom procedure page provides several suggestions for additional or alternatives things to do during the lesson. One such suggestion is to assign students one of the objects or ideas related to the Theory of Relativity to research and later present to the class. You could also invite a physicist to speak with the students about these concepts.

Lesson Objectives and Overview: Albert Einstein teaches students about the life of this famous scientist. Students will discover what he contributed to the world of science and how his discoveries still affect us today. This lesson is for students in 4th grade and 5th grade.

Every lesson plan provides you with a classroom procedure page that outlines a step-by-step guide to follow. You do not have to follow the guide exactly. The guide helps you organize the lesson and details when to hand out worksheets. It also lists information in the yellow box that you might find useful. You will find the lesson objectives, state standards, and number of class sessions the lesson should take to complete in this area. It describes the supplies you will need as well as what and how you need to prepare beforehand. In addition to the handouts, you will need to provide construction paper, markers, rulers, colored pencils, and anything other materials that could assist students in making their timelines for the activity.

There are several suggestions in the “Options for Lesson” section that you could incorporate into the lesson if you have extra time or want to add activities or tasks. One suggestion is to hold a vote after students complete the activity for various categories, such as most creative or best overall. Another option is to assign students one of the objects or ideas that relate to the theory of relativity to research further and present to the class. You could also have students write an essay about the theory of relativity. One more idea is to invite a physicist to speak to the class. You could also plan an “Albert Einstein Day” in which students dress up like the scientist.

The paragraph on this page mentions a few more things about the lesson as you prepare. It mentions using Einstein as a role model of someone who overcame struggles in school and became a great scientist. Use the blank lines on the page to write down any other thoughts you have prior to giving the lesson.

The Life of Albert Einstein

The Albert Einstein lesson plan contains three pages of content. The first page provides a brief biography of the scientist. It begins by informing students that he was one of the smartest men in history. Despite this fact, he had speech problems as a child, did not even talk until age 4, and didn’t read until age 9. He failed the entrance exam for college on his first attempt. He wasn’t organized and often forgot appointments.

Einstein was born in Germany in 1879. His father owned an electronics store, which is where he developed a strong interest in science after receiving a compass from his father at age 5. From that point on, he learned as much as he could about science. He was also very interested in math and wanted to study it in school. He graduated from Polytechnic Academy in Zurich, Switzerland, with a degree in math and physics.

Einstein moved back to Germany sometime after having his third child and began his first job as a clerk in a patent office. While there, he reviewed people’s inventions and worked on many of his own discoveries. He learned about many things that later were very important in the world of physics. He moved to the United States in 1933 to avoid the Nazis because he was Jewish. He became a U.S. citizen in 1940.

The Work of Albert Einstein

The next page describes the scientist’s most important contribution to the world of physics: the theory of relativity. This theory changed how scientists observe the world. In fact, it led to several modern inventions, including the nuclear bomb and nuclear energy. Basically, this theory explains how energy and mass relate to each other. Students will learn the famous equation E = mc² that people rightfully associate with Einstein.

The c in the equation represents the speed of light, a value that never changes. The E stands for energy, and the m for mass. His theory explains how time and distance may change when considering the different speed of an object or the observer. While the theory is fairly complex, many things relate to it, such as GPS, electromagnets, gold’s yellow color, light, and nuclear power plants. In effect, Einstein laid much of the foundation for modern physics.

Albert Einstein discovered the concept that light consisted of particles called photons in 1905. At first, most other scientists disagreed. In 1919, however, he was proven correct. He won the Nobel Prize for Physics in 1921. With the help of another scientists, Satyendra Bose, he also discovered another state of matter in addition to solids, liquids, and gases.

Einstein was a pacifist, or a person who is against war. However, one of his discoveries led to the research and development of the atomic bomb. The United States dropped two of these powerful explosive devices on two cities in Japan, which ended World War II. While he did not directly work on inventing the bomb, his work was vital to its development. As a result, people often associate his name with the atomic bomb.

Students will learn that Einstein was not just a scientist or physicist or mathematician. He often told people that if he were not a physicist, he would have been a musician. He loved music, a love he inherited from his mother. He played the violin and piano and got the most joy out of life when playing the two instruments in his spare time.

Einstein died of heart failure at the age of 76 in 1955. However, scientists have preserved his brain to examine it and try and find out why he was such a genius. They actually did find out that his brain is different from that of most other humans. He struggled with his education early in life but never gave up. His hard work led him to become one of the most brilliant people in history.

The Albert Einstein lesson plan contains three worksheets: an activity worksheet, a practice worksheet, and a homework assignment. These worksheets will help reinforce and solidify students’ grasp of the lesson content. The guidelines on the classroom procedure page detail when to hand out each of the worksheets throughout the lesson.

Students will work with a partner for the activity. (You can also have them work alone or in small groups if you prefer.) Students will review the list of years on the worksheet and ensure they use them on their timeline. They must carefully write the years in order and write facts that relate to the proper year. If they want to, they can also include drawings or images. They must also come up with a creative title.

The practice worksheet has two sections. The first section requires students to match terms to the correct statement. There are 10 statements in this section. For the second part, students must answer 10 questions using what they learned in the lesson.

For the homework assignment, students must first answer five questions. They will answer them as if they were physicists like Albert Einstein and invented a time machine. They will then write an acrostic poem using the letters in the word “Einstein” and facts that relate to him and his work.

The last few pages of the lesson plan document are the answer keys for the practice and homework worksheets. The answer key for the practice worksheet provides the correct responses in red. Because the homework assignment does not have questions with right or wrong answers, the answer key simply provides sample responses. Furthermore, it only provides these responses on the acrostic section of the assignment. You will need to review each student’s responses one by one to ensure they are appropriate to the questions. If you choose to administer the lesson pages to your students via PDF, you will need to save a new file that omits these pages. Otherwise, you can simply print out the applicable pages and keep these as reference for yourself when grading assignments.

Informative and very well put together

A good resource that has been well developed and helpful for teachers.

The materials were great and greatly enhanced my lesson.

This was an excellent lesson plan. It is perfect to put in my emergency sub file because it is so well laid out. 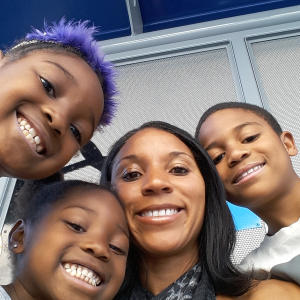 Great representation of Albert Einstein. She did practice and homework on him on her own. If you are homeschool, the lesson is the best out there

Good for personal bio, not good if kids are curious about science

So the theory of relativity is admittedly a hard topic to tackle in a way that pre-teens can digest at all. But I had hoped the material would at least touch on concepts like gravity and time. There's a brief foray into E=mc2 which isn't bad, but then everything else gets punted over to an unsupported bullet list of "things impacted/explained by the theory of relativity", e.g. "why gold is yellow" and "old television sets with tubes."