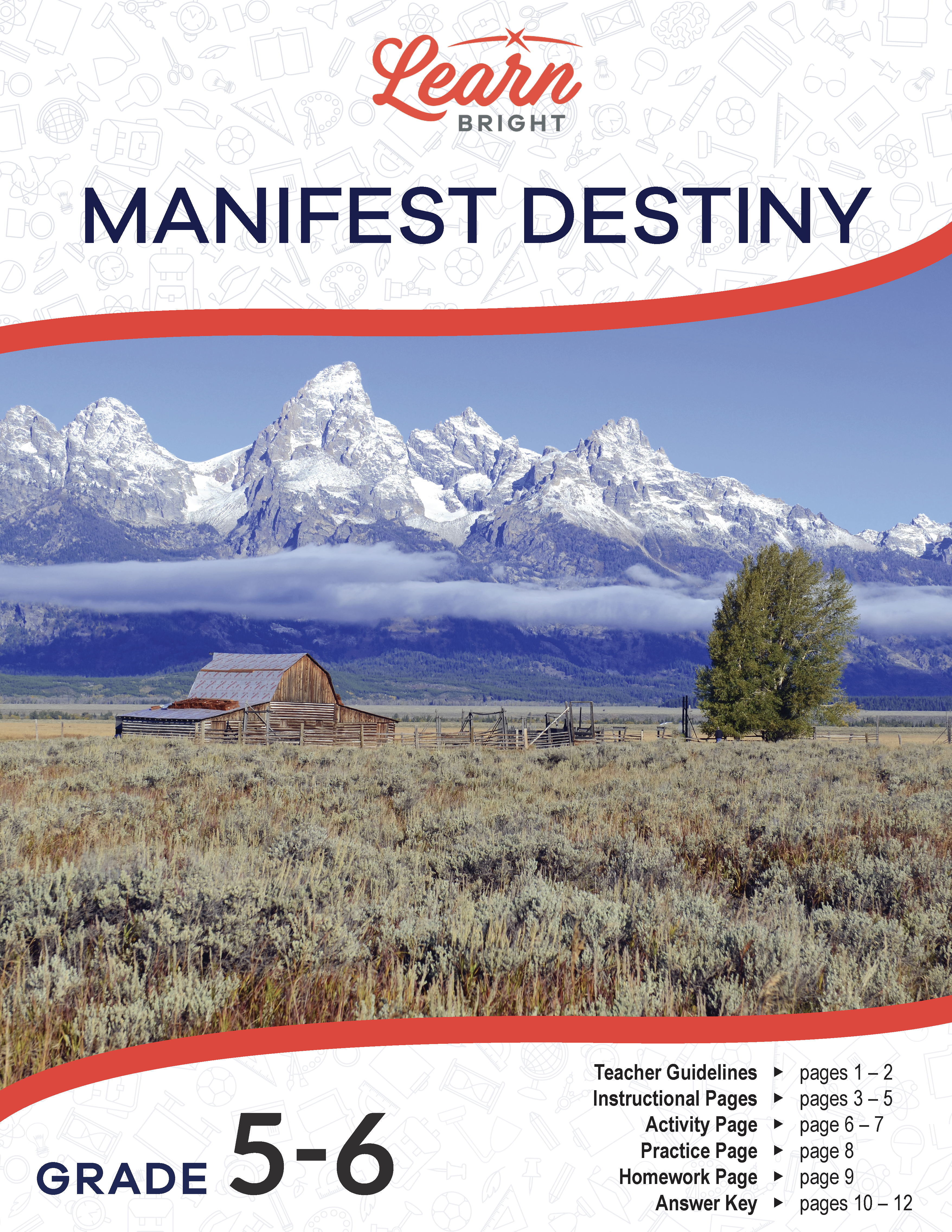 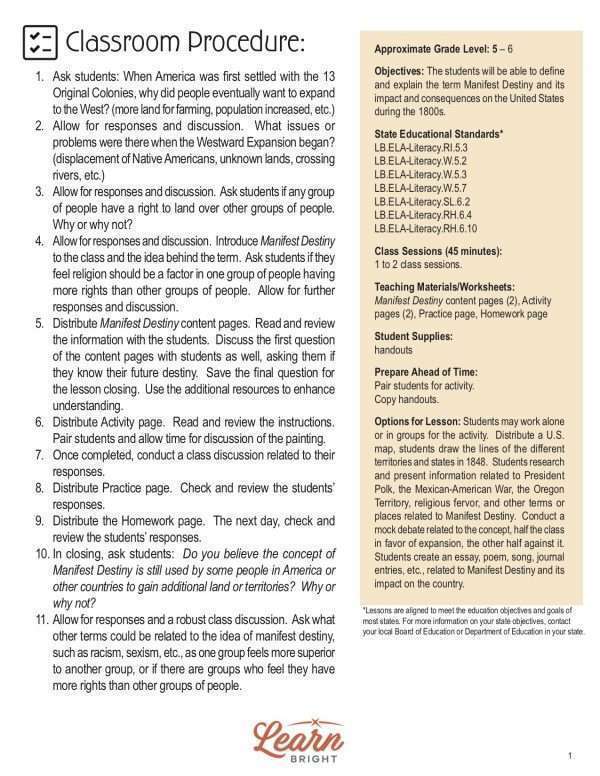 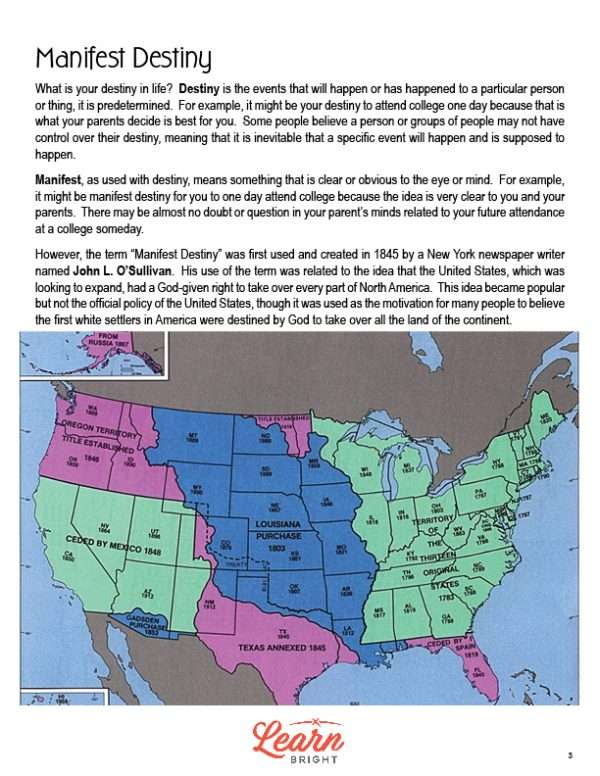 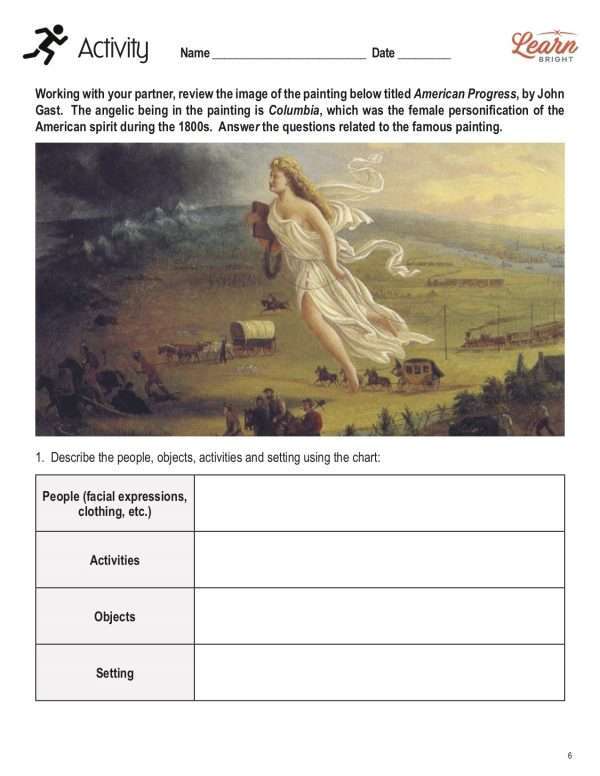 Manifest Destiny introduces to students the mindset that many people of 19th-century America held, that the colonists were destined to take over the whole of North America. Students will discover some of the important people and events of the time. They will also learn about its impact and some of the unfortunate consequences of this belief.

There are several suggestions in the “Options for Lesson” section that you could include in your lesson if you want to. You could, for instance, conduct a mock debate in which half the class will argue in favor of the expansion and the other half against it. Another option is to have students write an essay, poem, song, or other piece of writing related to Manifest Destiny and its impact on the country.

Lesson Objectives and Overview: Manifest Destiny teaches students about this unique mindset that influenced the expansion of the United States. Students will discover how the early settlers claimed a religious right to take over every part of North America. They will be able to define and explain the term and describe its impact and consequences on the U.S. during the 1800s.

There are three pages of content in this lesson that describe this concept and the problems people associate it with. Students will learn how early colonists believed it was their God-given right to displace Native American tribes and expand through the whole of North America. This idea that many people agreed with was a motivator for many to believe they were destined to take over the land.

Students will learn about several key figures and events that occurred during this time period. The lesson discusses many problems that arose as a result of this mentality, including the Mexican-American War. It also describes the tragic migration of thousands of Cherokee Indians who President Van Buren forced to walk from Oklahoma to Arkansas. This event is called the Trail of Tears.

For the activity worksheet, students will work with partners and study a painting titled American Progress by John Gast. The painting is of Columbia, the female personification of the American spirit. Students will describe the people, objects, activities, and setting using the blank spaces in the table below the picture. Then they will answer a series of questions that relate to the image.

The practice worksheet directs students to match definitions the terms in the word bank. There are 10 definitions total. Then students will answer an open-ended question about how people view Manifest Destiny today versus in the 1800s.

There are three sections for the homework assignment. First, students will answer 10 questions by filling in the blanks. Next, they will mark whether five statements are true (T) or false (F). Finally, they will rewrite a statement by John L. Sullivan in a more modern language.