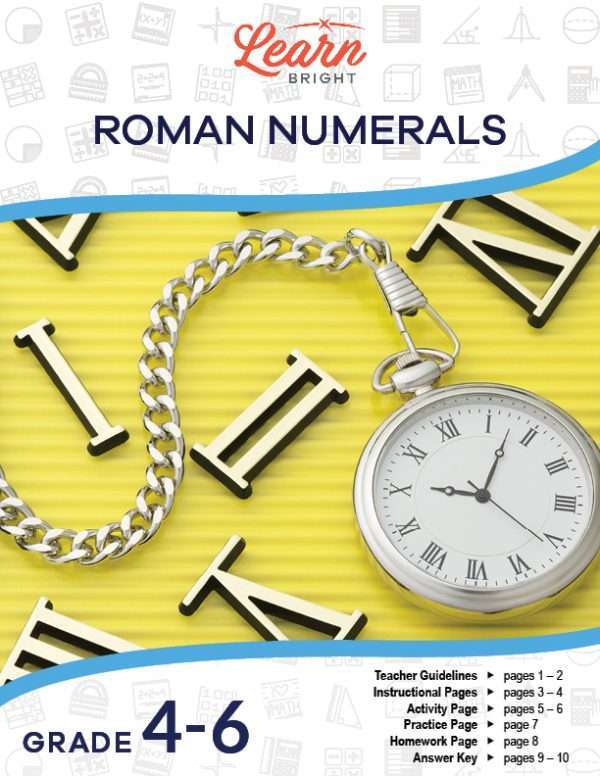 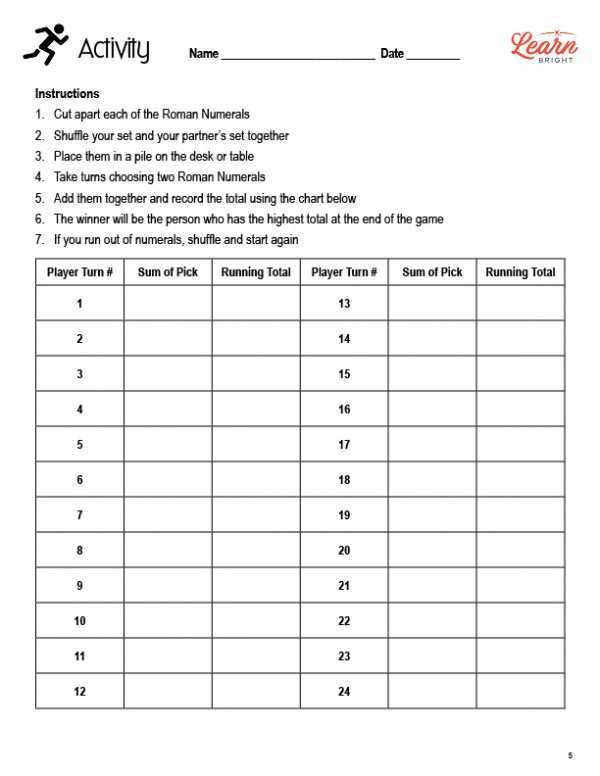 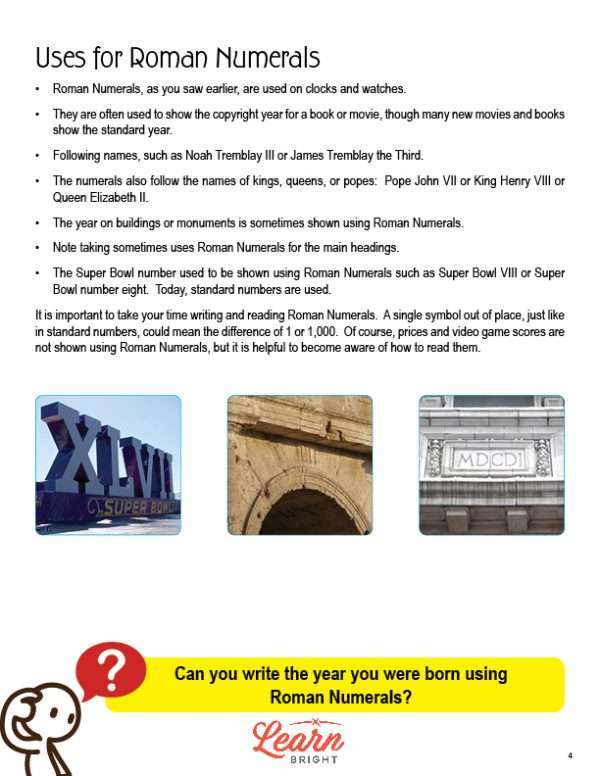 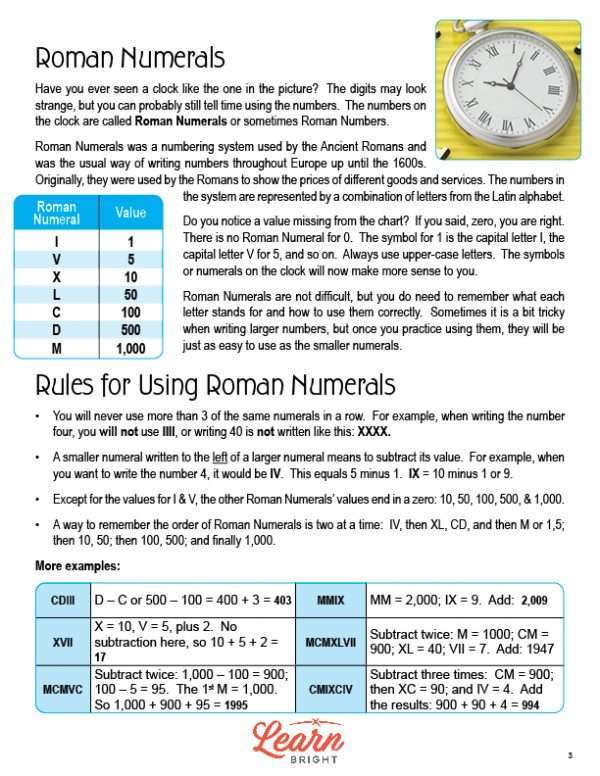 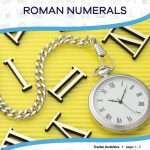 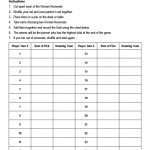 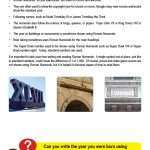 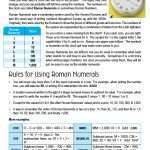 Our Roman Numerals lesson plan teaches students what roman numerals are, their history, and when and where they are still used today. Students will practice converting numbers into Roman Numerals and using them at appropriate times.

Included with this lesson are some adjustments or additions that you can make if you’d like, found in the “Options for Lesson” section of the Classroom Procedure page. One of the optional additions to this lesson is to create a list of important events and have students write the year that each event occurred in Roman Numerals.

Lesson Objectives and Overview: Roman Numerals equips students to define, identify, and use Roman Numerals. This fun lesson engages students with gameplay and collaborative learning as they use numeral manipulatives. This lesson is for students in 4th grade, 5th grade, and 6th grade.

Every lesson plan provides you with a classroom procedure page that outlines a step-by-step guide to follow. You do not have to follow the guide exactly. The guide helps you organize the lesson and details when to hand out worksheets. It also lists information in the blue box that you might find useful. You will find the lesson objectives, state standards, and number of class sessions the lesson should take to complete in this area. In addition, it describes the supplies you will need as well as what and how you need to prepare beforehand. The supplies you will need for this lesson are the handouts, scissors, and calculators. To prepare for this lesson ahead of time, you can gather the supplies and copy the handouts.

Included with this lesson is an “Options for Lesson” section that lists a number of suggestions for activities to add to the lesson or substitutions for the ones already in the lesson. An optional adjustment to the activity would be to either time it or limit it to a certain number of turns to help save time. For an additional game, you could create Roman Numeral bingo cards for the students to play bingo with. You could also have students create a mnemonic device to help them remember the correct order of the Roman Numerals. Finally, you could create a list of important events and have students write the year that each occurred in Roman Numerals.

The teacher notes page includes a paragraph with additional guidelines and things to think about as you begin to plan your lesson. It notes that we don’t use Roman Numerals as often today as we used to. However, we can still find them in old documents, in movies, and in other places. This page also includes lines that you can use to add your own notes as you’re preparing for this lesson.

The Roman Numerals lesson plan includes two pages of content. It begins by asking students if they’ve ever seen a clock that uses Roman Numerals for the numbers. We also sometimes call Roman Numerals Roman Numbers instead. The Ancient Romans used Roman Numerals as a numbering system. It was the main way of writing numbers all throughout Europe until the 1600s! Romans originally used them to mark the prices of various goods and services. In this system, the numbers are represented by letters from the Latin alphabet.

The next section of the lesson gives a few basic rules for using Roman Numerals. You never use more than three of the same numeral in a row. To write the number 4, you don’t just write IIII. When you write a smaller numeral to the left of a larger one, that means that you should subtract its value. Therefore, to write 4, you would write IV. V is 5 and I is 1, so IV is 5 minus 1. IX is 10 minus 1, or 9!

The lesson then includes some additional examples of Roman Numerals, what they stand for, and how to do the math to figure out their value. For example, CDIII equals 403 because D minus C is 500 minus 100, plus III, which is 3!

The final section of this lesson discusses some of the ways we use Roman Numerals. We sometimes see them on clocks or watches. For a long time, we used them to show the copyright year for a book or movie. However, more recent books and movies might use standard years. People sometimes have Roman Numerals at the end of their names, such as Noah Tremblay III (which you would read as Noah Tremblay the Third). Queens, kings, popes, and more also use them at the end of their names. Some examples are Pope John VII or King Henry VIII.

It is helpful for students to learn how to read and write Roman Numerals. Students must learn to be careful while writing them, just like they should be with standard numbers! If you accidentally write an extra symbol or leave one out, you could communicate the wrong thing.

The Roman Numerals lesson plan includes three worksheets: an activity worksheet, a practice worksheet, and a homework assignment. You can refer to the guide on the classroom procedure page to determine when to hand out each worksheet.

Students will work in pairs to complete this activity worksheet. Each student will first cut out the provided Roman Numerals and shuffle them together with their partner’s set, placing all of them in a pile on their desk or table. They will then take turns choosing two of the Roman Numerals and adding them together. They will record the total using the given chart. Whoever has the the highest total at the end of the game wins!

This lesson plan includes answer keys for the practice worksheet and the homework assignment. No answer key is provided for the activity worksheet as students’ answers will vary. If you choose to administer the lesson pages to your students via PDF, you will need to save a new file that omits these pages. Otherwise, you can simply print out the applicable pages and keep these as reference for yourself when grading assignments.

FacebookTwitter
Be the first to review this item
Filter Reviews:
×
Clear filter
More Filters
A
04/06/2022
Anonymous

It was a Great experience.

This resource is ready to go and provides some simple practical worksheets for classes.

The lesson was a good intro. I modified it a bit but a good resource.