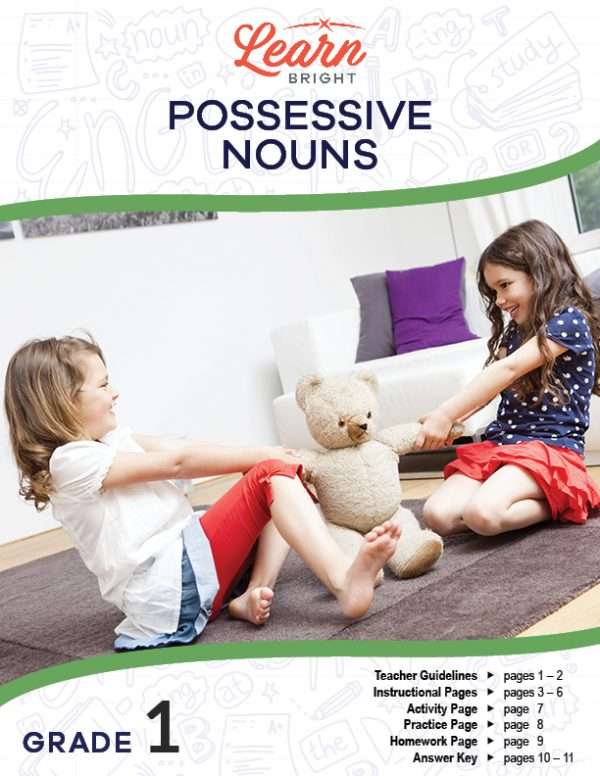 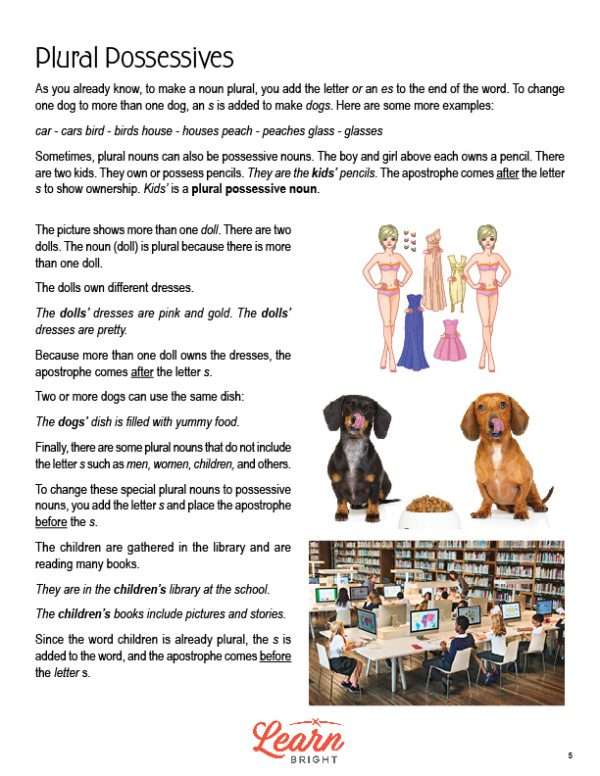 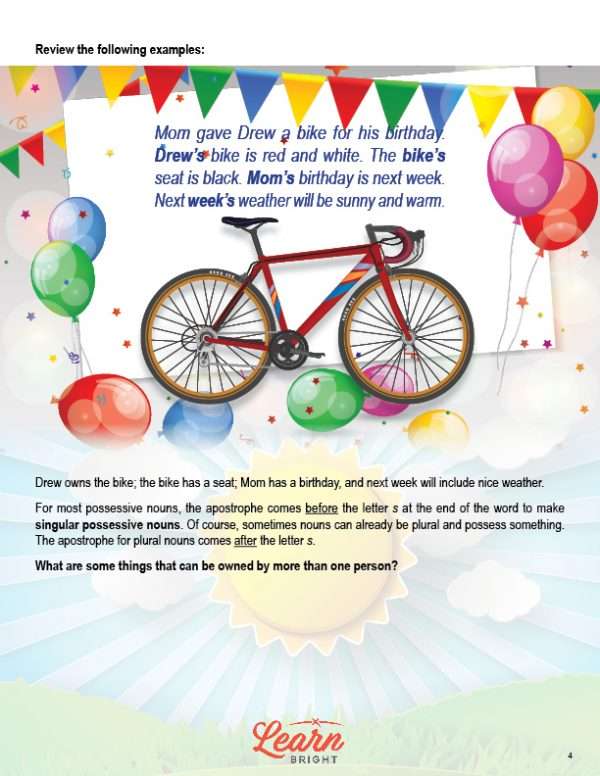 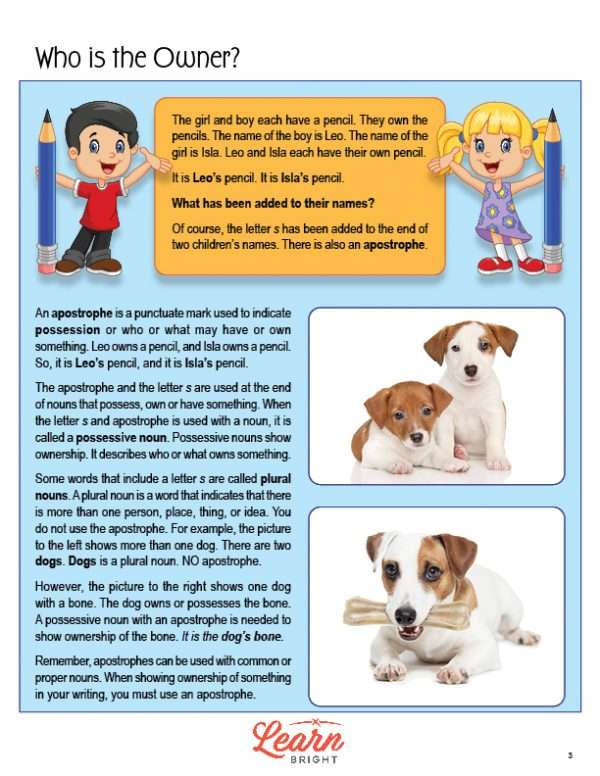 With our Possessive Nouns lesson plan, students learn all about possessive nouns, including what they are, how they are used, and how to identify them in text. Students will practice identifying and using them in their writing.

Included with this lesson are some adjustments or additions that you can make if you’d like, found in the “Options for Lesson” section of the Classroom Procedure page. One of the optional additions to this lesson is… to hold a “Possessive Noun Bee” in your class, where students have to use a possessive noun in a sentence and spell it correctly (including the apostrophe).

Lesson Objectives and Overview: Possessive Nouns teaches students about this type of noun, including how to identify them in other people’s writing and how to use them in their own writing. At the end of the lesson, students will be able to correctly form, use, and identify possessive nouns. This lesson is for students in 1st grade.

Every lesson plan provides you with a classroom procedure page that outlines a step-by-step guide to follow. You do not have to follow the guide exactly. The guide helps you organize the lesson and details when to hand out worksheets. It also lists information in the orange box that you might find useful. You will find the lesson objectives, state standards, and number of class sessions the lesson should take to complete in this area. In addition, it describes the supplies you will need as well as what and how you need to prepare beforehand. The only supplies you will need for this lesson are the handouts. To prepare for this lesson ahead of time, you can copy the handouts and pair students for the activity.

Included with this lesson is an “Options for Lesson” section that lists a number of suggestions for activities to add to the lesson or substitutions for the ones already in the lesson. As an adjustment to the lesson activity, you could change the number of nouns they have to write sentences for. You could also assign a similar activity as a homework assignment. For additional practice, you could have students identify and list possessive nouns from their current reading material or other content. You could also hold a “Possessive Noun Bee” in your class, where students have to use a possessive noun in a sentence and spell it correctly (including the apostrophe).

The teacher notes page includes a paragraph with additional guidelines and things to think about as you begin to plan your lesson. It notes that you can use this lesson plan in conjunction with lessons on plural possessives or other lessons related to nouns. This page also includes lines that you can use to add your own notes as you’re preparing for this lesson.

Who is the Owner?

The Possessive Nouns lesson plan includes four content pages. The lesson begins with an example. In this example, a boy and girl each have a pencil. Their names are Leo and Isla. Therefore, it is Leo’s pencil and it is Isla’s pencil. In this example, the letter s and an apostrophe has been added to each of their names to show that they are each the owner of a pencil.

You can make both common and proper nouns possessive. The lesson then includes some additional examples of singular possessive nouns, like Drew’s, bike’s, and Mom’s. We can also make plural nouns possessive. In these cases, we add the apostrophe after the s.

Next, students will learn about plural possessive nouns. They already know that to make a noun plural, you add either s or es to the end of the word. Because these words already end in s, to make them possessive, you only add an apostrophe to the end of the word, after the s. For example, if multiple kids (plural) own pencils, they would be the kids’ pencils. Kids’ is a plural possessive noun.

The lesson then delves into a few more examples of plural possessives. These includes dolls’ dresses (multiple dolls possessing dresses) and dogs’ dish (a dish used by multiple dogs).

The Possessive Nouns lesson plan includes three worksheets: an activity worksheet, a practice worksheet, and a homework assignment. You can refer to the guide on the classroom procedure page to determine when to hand out each worksheet.

Students will work with a partner to complete the activity worksheet. Each pair of students will use the people, places, and things in their classroom or outdoors to fill in a chart with both possessive and common nouns. They will then write a sentence for each pair (one possessive noun and one common noun per sentence).

Students may work either alone or in larger groups for this activity if you’d prefer.

This lesson plan includes answer keys for the practice worksheet and the homework assignment. No answer key is provided for the activity worksheet, as students’ answers will vary. If you choose to administer the lesson pages to your students via PDF, you will need to save a new file that omits these pages. Otherwise, you can simply print out the applicable pages and keep these as reference for yourself when grading assignments.