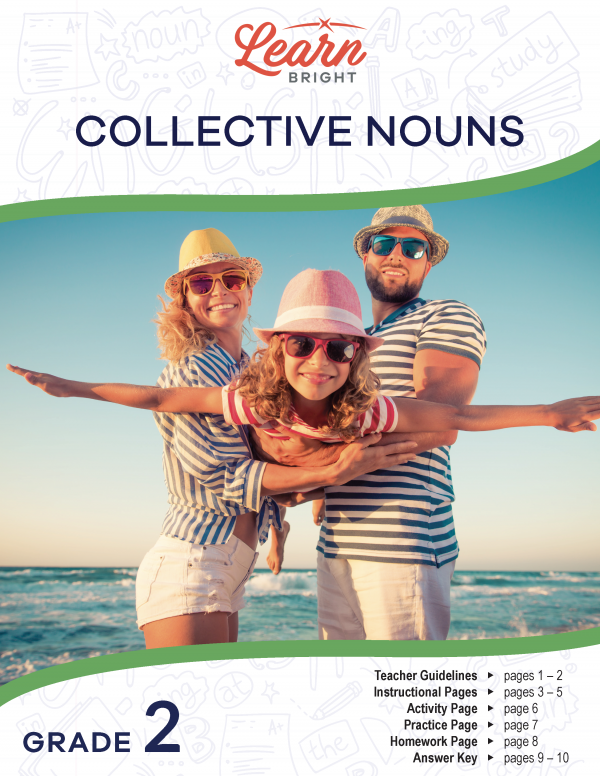 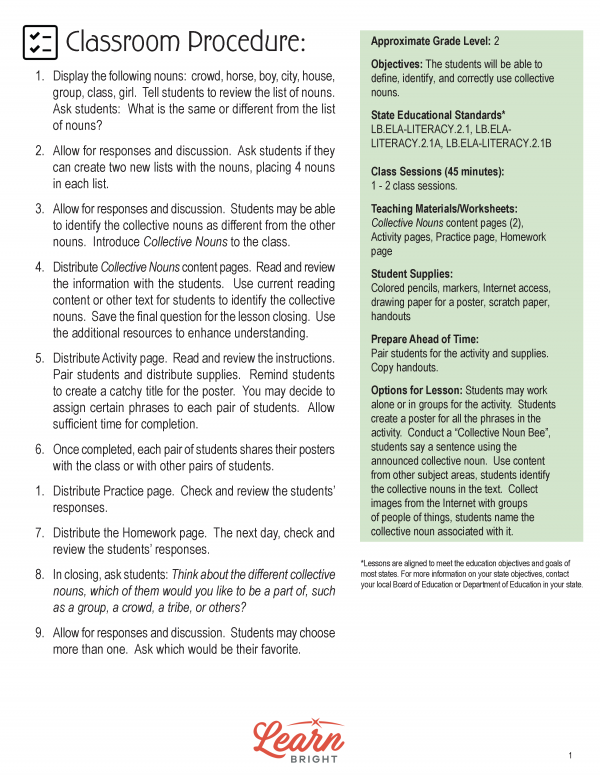 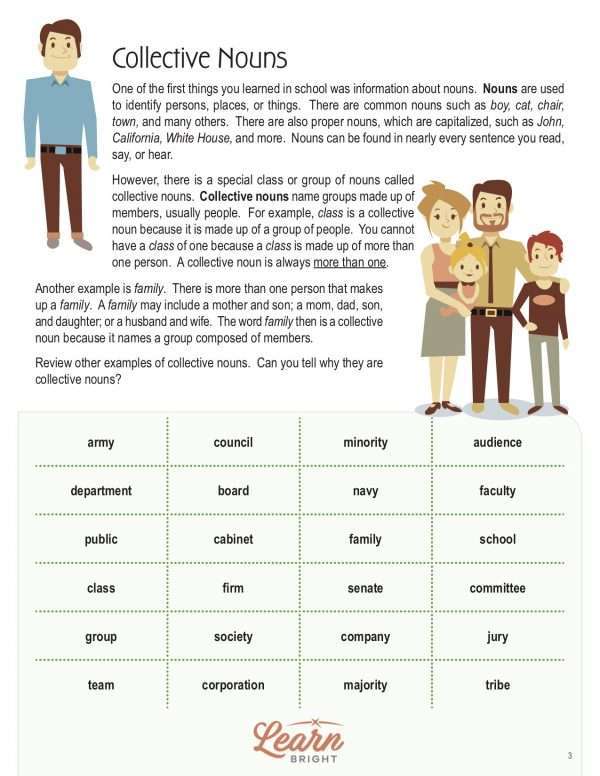 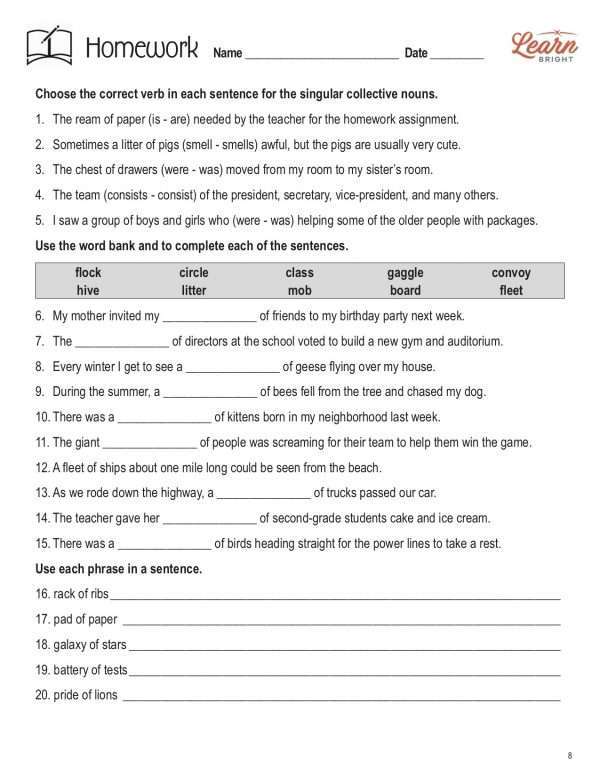 Collective Nouns introduces students to nouns that represent groups of people or things. Students will learn how to identify these nouns and distinguish between them and singular nouns.

The “Options for Lesson” section provides several suggestions for additional activities you could do for the lesson. One option is to have students create a poster for all the phrases in the activity. Another is to conduct a “collective noun bee” in which students will say a sentence using the announced collective noun. You could also collect images online that show groups of people or things and have students name the collective noun that is associated with that picture.

Lesson Objective and Overview: Collective Nouns teaches students how to identify and correctly use collective nouns. Students will learn how to define and then distinguish these nouns from singular nouns. The lesson material and worksheets will provide them with a lot of practice to solidify their grasp of the concepts. This lesson is for students in 2nd grade.

Every lesson plan provides you with a classroom procedure page that outlines a step-by-step guide to follow. You do not have to follow the guide exactly. The guide helps you organize the lesson and details when to hand out worksheets. It also lists information in the green box that you might find useful. You will find the lesson objectives, state standards, and number of class sessions the lesson should take to complete in this area. In addition, it describes the supplies you will need as well as what and how you need to prepare beforehand. You will need the following supplies for this lesson: colored pencils, markers, internet access, drawing paper, scratch paper, and the handouts. To prepare for this lesson ahead of time, you can pair students for the activity, gather the supplies, and copy the handouts.

Included with this lesson is an “Options for Lesson” section that lists a number of suggestions for activities to add to the lesson or substitutions for the ones already in the lesson. One option is to have students create a poster for all the phrases in the activity. Another is to conduct a “Collective Noun Bee” in which students will say a sentence using the announced collective noun. You could also collect images online that show groups of people or things and have students name the collective noun that is associated with that picture. Finally, you can have students identify the collective nouns in text from content from other subject areas for additional practice.

The teacher notes page includes a paragraph with additional guidelines and things to think about as you begin to plan your lesson. It notes that while students are likely aware of what nouns are in general, they may not know what collective nouns are specifically. This page also includes lines that you can use to add your own notes as you’re preparing for this lesson.

The Collective Nouns lesson contains three pages of content. The first page introduces the concept of nouns that represent groups of things. We generally use nouns to identify people, places, or things. Common nouns are words like boy, cat, and chair. Proper nouns are words like John, California, and White House. We capitalize proper nouns. We use nouns in almost every single sentence!

Next, the lesson includes a table of 24 different collective nouns, such as army, tribe, firm, class, and school. It asks students to think about why each of these words are collective nouns. All of the examples in the table include more than one member! An army has multiple soldiers, for example.

Students will then learn that we use specific collective nouns to represent many types of animals. For instance, we call multiple birds a flock and a group of lions a pride of lions. The lesson includes 12 examples of the different words we use for groups of animals.

Next, students will learn how to use collective nouns. When using them, you must make sure to use the correct verbs and pronouns. The verbs that you use with a noun change depending on whether the noun is singular or plural. The lesson provides two example sentences to illustrate this, one of which has the phrase dog is and the other has the phrase dogs are. This shows that the verb (in this case, is or are) changes depending on whether the noun is dog (singular) or dogs (plural).

We use collective nouns to name groups made up of members (typically people). We sometimes use them for objects or things as well, such as a bunch of bananas. Using the correct verbs with collective nouns is very important, as they can be either singular or plural. Practice using and identifying collective nouns will help make students better readers and writers!

The Collective Nouns lesson plan includes three worksheets: an activity worksheet, a practice worksheet, and a homework assignment. You can refer to the guide on the classroom procedure page to determine when to hand out each worksheet.

Students will work with a partner for the activity worksheet. They will create a poster that shows how to use a collective noun. They can draw pictures or gather images online or from other sources. The poster must include pictures for at least 10 phrases from the table of choices on the worksheet. They can use the blank box at the bottom of the page for a rough draft, and can then create their final poster. They must also title the poster.

Students can work either alone or in larger groups for this activity if you’d prefer.

The homework assignment is divided into three parts. For the first part, students must choose the correct verb in each sentence for the singular collective noun. The second part requires them to use the words in the word bank to complete 10 sentences. The final section requires that they use each given phrase in a sentence.

This lesson plan includes answer keys for the practice worksheet and the homework assignment. No answer key is provided for the activity worksheet, as each pair’s poster will differ. If you choose to administer the lesson pages to your students via PDF, you will need to save a new file that omits these pages. Otherwise, you can simply print out the applicable pages and keep these as reference for yourself when grading assignments.